The Road to Cloud Nirvana: The Madrona Venture Group’s View on Serverless 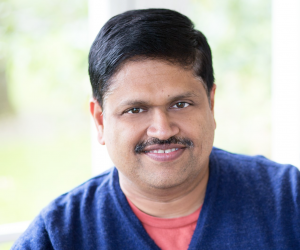 The progression over the last 20 years from on-premise servers, to virtualization, to containerization, to microservices, to event-driven functions and now to serverless computing is allowing software development to become more and more abstracted from the underlying hardware and infrastructure. The combination of serverless computing, microservices, event-driven functions and containers truly form a distributed computing environment that enables developers to build and deploy at-scale distributed applications and services. This abstraction between applications and hardware allows companies and developers to focus on their applications and customers—not worrying about scaling, managing, and operating servers or runtimes.

In today’s cloud world, more and more companies are moving towards serverless products like AWS Lambda to run application backends, respond to voice and chatbot requests, and process streaming data because of the benefits of scaling, availability, cost, and most importantly, the ability to innovate faster because developers no longer need to manage servers. We believe that microservices and serverless functions will form the fabric of the intelligent applications of the future. The massive movement towards containers has validated the market demand for hardware abstraction and the ability to “write once, run anywhere,” and serverless computing is the next stage of this evolution. 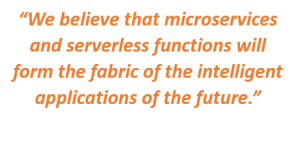 Today, developers can use products like AWS Lambda, S3, and API Gateway in conjunction with services like Algorithmia, to assemble the right data sources, machine learning models, and business logic to quickly build prototypes and production-ready intelligent applications in a matter of hours. As more companies move towards this mode of application development, we expect to see a massive amount of innovation around AI and machine learning, application of AI to vertically-focused applications, and new applications for IOT devices driven by the ability for companies to build products faster than ever. 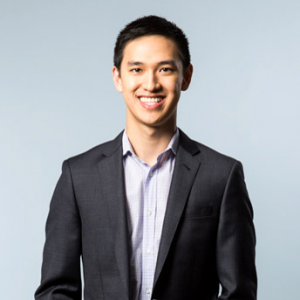 Nevertheless, with the move towards containerization and serverless functions, it can be much harder to monitor application performance, debug applications, and ensure that applications have the correct security and policy settings. For example, SPIFFE (Secure Production Identity Framework for Everyone) provides some great context for the kinds of identity and trust-related work that needs to happen for people to be able to build, share, and consume micro-services in a safe and secure manner.

For all the above-mentioned reasons, Madrona has made several investments in companies building tools for microservices and serverless computing in the last year and we are continuing to look for opportunities in this space as the cloud infrastructure continues to evolve rapidly.

Below, you’ll hear from three of the startups in our portfolio and how they are building tools to enable developers and enterprises to adopt serverless approaches, or leveraging serverless technologies to innovate faster and better serve their customers.

Algorithmia empowers every developer and company to deploy, manage, and share their AI/ML model portfolio with ease. Algorithmia began as the solution to co-founders Kenny Daniel and Diego Oppenheimer’s frustrations at how inaccessible AI/ML algorithms were. Kenny was tired of seeing his algorithms stuck in an unused portion of academia and Diego was tired of recreating algorithms he knew already existed for his work at Microsoft.

Kenny and Diego created Algorithmia as an open marketplace for algorithms in 2013 and today it services over 60,000 developers. From the beginning, Algorithmia has relied on serverless microservices, and this has allowed the company to quickly expand its offerings to include hosting AI/ML models and full enterprise AI Layer services.

AI/ML models are optimally deployed as serverless microservices, which allows them to quickly and effectively scale to handle any influx of data and usage. This is also the most cost-efficient method for consumers who only have to pay for the compute time they use. This empowers data scientists to consume and contribute algorithms at will. Every algorithm committed to the Algorithmia Marketplace is named, tagged, cataloged, and searchable by use case, keyword, or title. This has enabled Algorithmia to become an AWS Lambda Code Library Partner.

In addition to the Algorithm Marketplace, Algorithmia uses the serverless AI Layer to power two additional services: Hosting AI/ML Models and Enterprise Services where they work with government agencies, financial institutions, big pharma, and retail. The AI layer is cloud, stack, and language agnostic. It serves as a data connector, pulling data from any cloud or on-premises server. Developers can input their algorithms in any language (Python, Java, Scala, NodeJS, Rust, Ruby, and R), and a universal REST API will be automatically generated. This allows any consumer to call and chain algorithms in any combination of languages. Operating under a Kubernetes-orchestrated Docker system allows Algorithmia’s services to operate with the highest degree of efficiency.

As companies add AI/ML capabilities across their organizations, they have the opportunity to escape the complications that come with a monolithic application and begin to implement a serverless microservice architecture. Algorithmia provides the expertise and infrastructure to help them be successful.

Pulumisaw an opportunity in 2017 to fundamentally reimagine how developers build and manage modern cloud systems, thanks in large part to the rise in serverless computing intersecting with advances in containers and managed cloud infrastructure in production. By using programming languages and tools that developers are already familiar with, rather than obscure DSLs and less capable, home-grown templating solutions, Pulumi’s customers are able to focus on application development and business logic rather than infrastructure.

As an example, one of Pulumi’s Enterprise customers was able to move from a dedicated team of DevOps Engineers to a combined Engineering organization—reducing their cloud infrastructure scripts to 1/100th the size in a language the entire team already knew and empowering their developers – and is now substantially more productive than ever before in building and continuously deploying new capabilities. The resulting system uses the best of what the modern cloud has to offer—dozens of AWS Lambdas for event-driven tasks, replacing a costly and complex queuing system, several containers that can run in either ECS or Kubernetes, and several managed AWS services like Amazon CloudFront, Amazon OpenSearch Service (successor to Amazon Elasticsearch Service), and Amazon ElastiCache—and now runs at a fraction of the cost before migrating to Pulumi. They have been able to spin up entirely new environments in minutes where it used to take weeks.

Before the recent culmination of serverless, containers, and hosted cloud infrastructure, such an approach simply would not have been possible. In fact, we at Pulumi believe that the real magic is in these approaches living in harmony with one another. Each has its own strengths: containers are great for complex stateful systems, often taking existing codebases and moving them to the cloud; serverless functions are perfect for ultra-low-cost event- and API-oriented systems; and hosted infrastructure lets you focus on your application-specific requirements, instead of reinventing the wheel by manually hosting something that your cloud provider can do better and cheaper. Arguably, each is “serverless” in its own way because infrastructure and servers fade into the background. This disruptive sea change has enabled Pulumi to build a single platform and management suite that fully realizes this entire spectrum of technologies.

The future is bright for serverless- and container-oriented cloud architectures, and Pulumi is excited to be right at the center of it helping customers to realize the incredible benefits.

IOpipe co-founders Erica Windisch and Adam Johnson went from virtualizing servers at companies like Docker, to going “all in” on serverless in 2016. Erica and Adam identified serverless as the next revolution in infrastructure, coming roughly 10 years after the launch of AWS EC2. With a shift in computing moving towards a serverless world, there are new challenges that emerge. From dozens of production Lambda user interviews, Erica and Adam identified that one of the major challenges in adopting serverless was a lack of visibility and instrumentation. In 2016, Erica and Adam co-founded IOpipe to focus on helping companies build, ship, and run serverless applications, faster.

IOpipe enables developers to debug code faster by providing real-time visibility into their functions as they develop them. Developers can dig deep into what’s really happening under the hood with tools such as profiling and tracing. Once they’re in production, IOpipe then provides a rich set of observability tools to help bubble up issues before they affect end-users. IOpipe saw customers who previously spent days debugging tough issues in production now able to find the root cause in minutes using IOpipe.

Since launching the IOpipe service in Q3 of 2017, the company has seen customers ranging from SaaS startups to large enterprises enabling their developers to build and ship Lambda functions into production at an incredibly rapid pace. What previously took one customer 18 months can now be done in just two months.

IOpipe works closely with AWS as an advanced tier partner, enabling AWS customers to embrace serverless architectures with power-tools such as IOpipe.