Many of our customers use native SQL Server backup and restore features to migrate on-premises SQL Server databases to AWS. When using the native SQL Server backup and restore functionality, you can simplify the database migration process by performing a full backup restore on the target SQL instance. In addition, with the help of differential and log backups, you can significantly reduce your application cutover time.

However, migrating large (10+ TB) SQL Server databases can include many terabytes of information, and can be cumbersome for several reasons. Local network bandwidth limits may throttle your migration, or the size of your database backup may exceed the throughput of your internet, VPN, or AWS Direct Connect link to AWS. Retaining incremental backups for a long time on premises while full backups are being transferred can incur additional storage capacity costs and increase operational overhead.

In this post, I walk you through a two-step process that enables you to migrate large SQL Server databases to AWS. The first step includes transferring a one-time full backup to Amazon S3 using AWS Snowball Edge Storage Optimized to create a replica of your SQL Server in AWS. The second step uses AWS DataSync and Amazon FSx for Windows File Server (Amazon FSx) to transfer incremental backups to keep the SQL Server in AWS up to date until the cutover. As part of this solution, I cover how to simplify your large database migration using AWS Snowball Edge Storage Optimized when there is a local network bandwidth constraint. I also demonstrate how you can transfer incremental backups to free up on-premises backup storage, while durably storing SQL Server data on AWS. Doing so reduces cost for your organization by moving that data off expensive storage systems.

The AWS Snowball Edge Storage Optimized device is a member of the AWS Snow Family. You can use a Snowball to physically transport and migrate a large SQL Server database, and for the initial transfer of your database backups to AWS. Once you have shipped your Snowball back to AWS, your backup data is uploaded into your S3 bucket, enabling you to restore your databases to SQL Server on Amazon EC2.

You may need to process and transfer ongoing changes in your active databases that are occurring while your backups are being delivered into S3. You can implement a hybrid solution with the initial backup transferred over the Snow device, and subsequent incremental changes transferred as differential and transaction log backups using AWS DataSync and Amazon FSx. After the initial backup reaches AWS and is restored to your target platform, your target SQL Server on EC2 can catch up by restoring subsequent backups. It can stay in sync with your production database through regular transaction log restores. When you are ready to cut over to AWS, you only need a short period of downtime to process the last transaction log backups.

Before you get started, you must complete the following prerequisites:

The solution consists of two stages.

In stage one, we use AWS Snowball for transferring one-time full backup to AWS and then restore backup to the SQL Server database on Amazon EC2:

In stage two, we use AWS DataSync for ongoing data changes:

(Stage 1.1) Create a full backup of SQL Server database from the on-premises source

(Stage 1.2) Transfer the full backups to Snow Device and ship the snow device to AWS

The next step is to transfer the full database backup files to your Snow device and ship the Snow device to AWS. AWS has created a getting start guide and Knowledge Center article that walks you through the process on how to transfer data using An AWS Snow Family device.

The next step is to create a task for DataSync by choosing the source location type as Amazon S3 bucket, destination location type as Amazon FSx for Windows File Server, and your migration settings. For instructions on how to create data transfer from S3 to in-cloud file systems, see the documentation on transferring data from S3 to in-cloud file systems in AWS documentation. 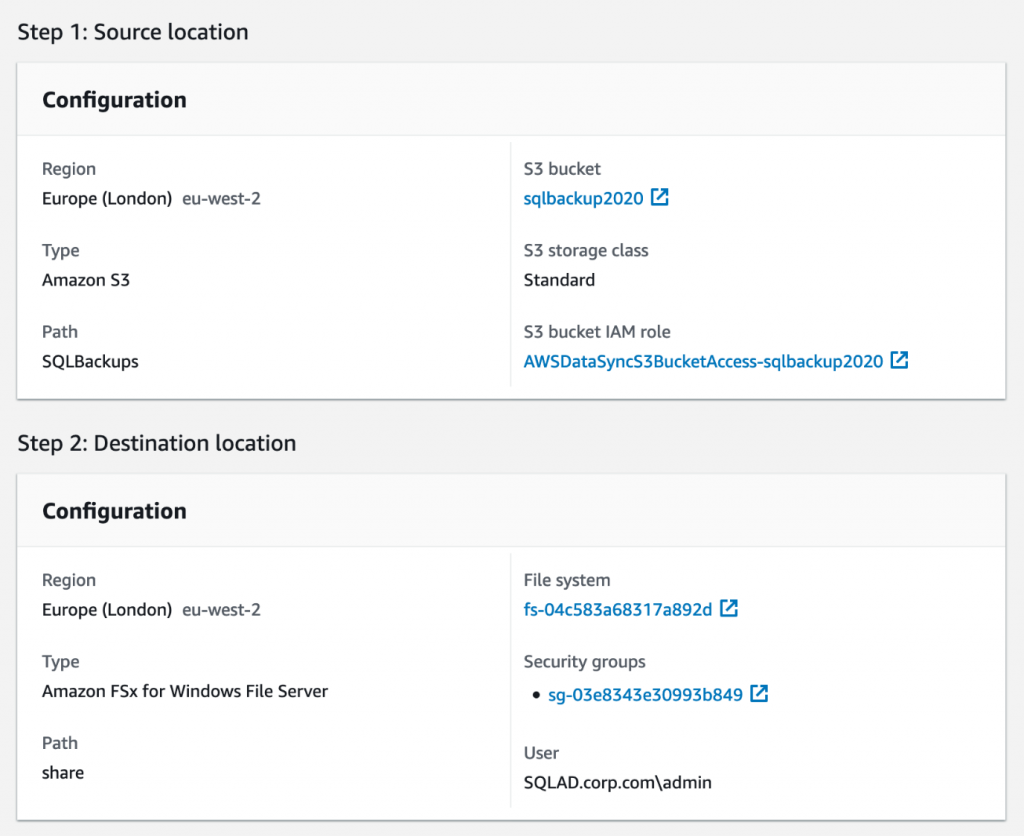 Once you have specified the task settings and created the DataSync task, the next step is to start the task. You should see your backup files appearing on your Amazon FSx file system.

(Stage 1.4) Access your Amazon FSx file system from the EC2 instance that your SQL Server database is running on

Amazon FSx file system stores your backups in AWS, and you need access to your file system on the target EC2 machine so that the backup files can be directly restored to the SQL Server running on Amazon EC2.

To access your file shares, use the Windows Network Drive Mapping functionality to map a drive letter on your compute instance to your Amazon FSx file system.

After you transferred the file to Amazon FSx file share, it’s available for SQL Server on Amazon EC2 to restore. Restore a full database backup by executing the following T-SQL code.

The NORECOVERY option leaves the database in a “Restoring” state after the restore has completed. This allows you to restore additional backups in the current recovery path.

Automate your SQL Server backups in an SQL Server agent job to run on a scheduled basis and directed to your local Server Message Block (SMB) file share on premises. Create an incremental log backup to local share by executing the following T-SQL code.

Start by deploying a DataSync agent on-premises, where it can access your source storage location via SMB file share with SQL Server backup files. AWS provides an image for the agent deployment can be downloaded from the DataSync console.

The next step is to create a task for DataSync. To do so, choose the source location type as Server Message Block (SMB), destination location type as Amazon FSx for Windows File Server, and your migration settings. For instructions on how to create a location, see the documentation on working with locations. 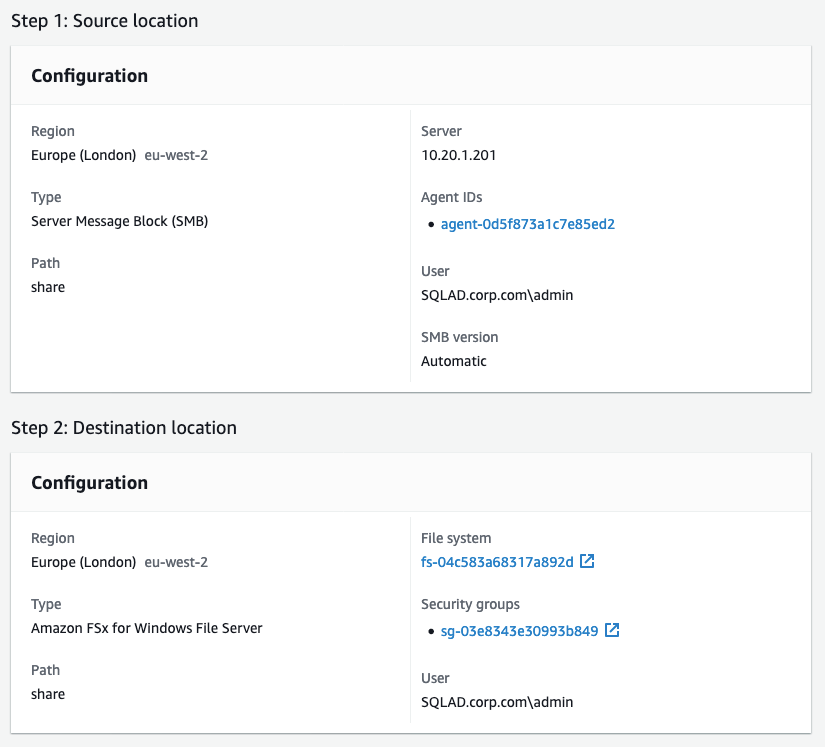 Validation: In the Task execution configuration section, choose the option to Verify only the data transferred. 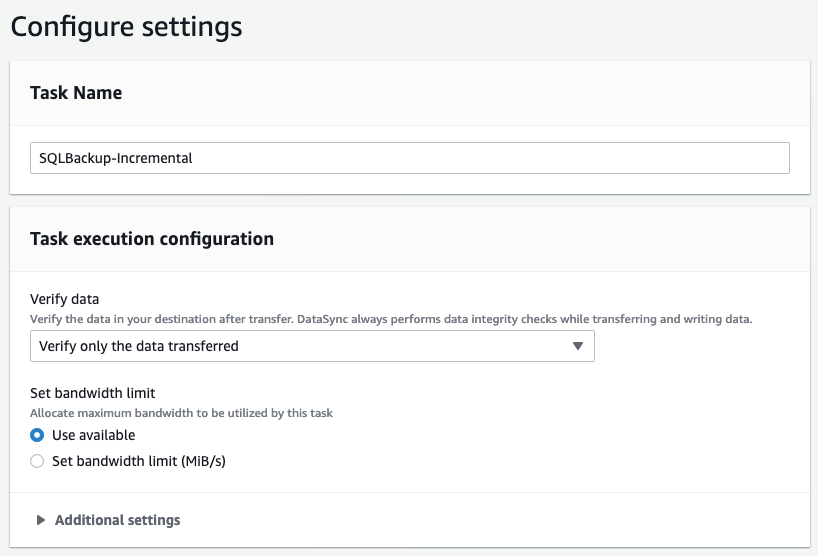 Schedule: On the Schedule option, you can specify when you want the AWS DataSync task to run. 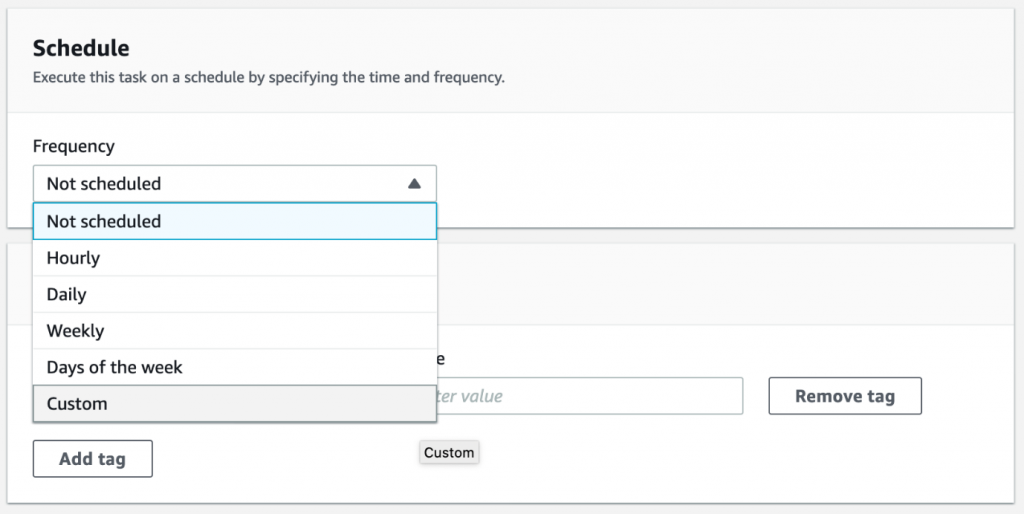 When you start the task, you should see the subsequent changes transferred as differential and transaction log backups to the target Amazon FSx file system.

After the initial backup reaches AWS and is restored to your target database in the “restoring” state, you can now start restoring the subsequent log backups and kept in sync with production database with regular transaction log restore.

(Stage 2.5) Monitor your DataSync task and cutover the database-dependent application to use Amazon EC2

You can monitor the task using CloudWatch. When the backup file is created at the source location and begins replicating to the target, it is replicated based on the task schedule configured in the previous step. If you are concerned about impacting your internet bandwidth during business hours, you can configure the AWS DataSync task to run on a custom schedule and specify off-peak hours.

When the application is ready for cutover, perform the following steps:

In this blog post, I covered how to simplify large SQL Server database migrations by leveraging AWS Snowball, AWS DataSync, and Amazon FSx. I demonstrated how you can optimize a one-time full backup transfer to AWS when there is a local network bandwidth constraint using an AWS Snowball device. I also showed how you can transfer incremental backups using AWS DataSync and Amazon FSx for Windows File Server, keeping your SQL Server in AWS up to date until your application cutover. This solution can help you automate and accelerate data transfer, freeing up your on-premises storage capacity. By doing so, you can reduce your organizational costs by moving that data off expensive storage systems.

Thanks for reading this blog post. If you have any comments or questions, don’t hesitate to leave them in the comments section. To learn more about the services used in this post, check out the following resources: