Today we are excited to release support for PowerShell Core 6.0 with AWS Lambda. This new feature enables you to execute PowerShell scripts or functions in response to any Lambda event, such as an Amazon S3 event or Amazon CloudWatch scheduled event.

Setting up a development environment

Before we get started developing PowerShell based Lambda functions, let’s set up our development environment.

The last component we need for the development environment is the new AWSLambdaPSCore module that you can install from the PowerShell Gallery. The following is an example of installing the module from a PowerShell Core shell.

This new module has the following new cmdlets to help you author and publish PowerShell based Lambda functions.

To demonstrate how we can use PowerShell based Lambda, we will use it to execute a PowerShell script that ensures that the Remote Desktop (RDP) port is not left open on any of our EC2 security groups. We will publish our script to Lambda and configure a CloudWatch scheduled event to periodically run our script.

Note: If you are walking through this example and don’t want to remove any RDP ports, then for testing purposes, change references to port 3389 to something else.

Creating a PowerShell based Lambda script

To help get started writing a PowerShell based Lambda function, you can use the New-AWSPowerShellLambda cmdlet to create a starter script that is based on a template. If we execute the Get-AWSPowerShellLambdaTemplate, we can see a list of available templates.

For this walkthrough, let’s start with a Basic template. To create a script named RDPLockDown by using the Basic template, execute the following command. 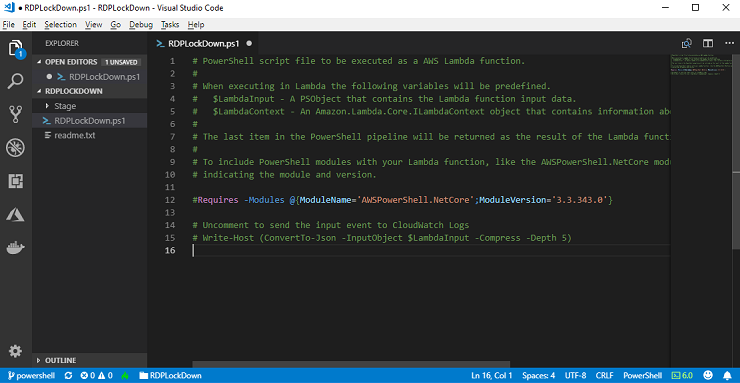 There are a few things to take note of in this starter script.

Some Lambda invocations are meant to return data back to their caller. For example if an invocation was in response to a web request coming from Amazon API Gateway, then our Lambda function needs to return back the response. For PowerShell based Lambda, the last object added to the PowerShell pipeline is the return data from the Lambda invocation. If the object is a string, the data is returned as is. Otherwise, the object is converted to JSON using the ConvertTo-Json cmdlet.

The #Requires statement indicates additional modules that are required to execute a PowerShell script. In our starter script you can see that the AWSPowerShell.NetCore module is required. This gives us access to Amazon EC2 to check for open RDP ports. Later, when we publish our script to Lambda, all modules indicated in a #Requires statement will be packaged up with the script as part of our deployment package. The modules will be imported into the PowerShell environment in Lambda before executing the PowerShell script.

Lambda uses the Amazon CloudWatch Logs service to record logging messages. In PowerShell based Lambda, this means the write cmdlets, such as Write-Host, Write-Output, and Write-Information, are written to CloudWatch Logs.

For our use case of locking down the RDP port, let’s use the following script. This script searches through all of our EC2 security groups to see if there are any ingress rules to allow traffic for port 3389, the RDP port. If an ingress rule is found, the rule is deleted. Notice we have several calls to Write-Host to record in our logs the security group we cleared the rules for.

To publish our new PowerShell based Lambda function, let’s execute the following command.

On my system I have a default profile that will be used for obtaining AWS credentials. If I wanted a different profile, I could use the -Profile parameter. If you have configured your PowerShell environment with AWS credentials and region with the Set-AWSCredentials and Set-DefaultAWSRegion cmdlets, the Publish-AWSPowerShellLambda cmdlet will pick up those settings.

Because an IAM role was not set for the new Lambda function, we were prompted to select or create a role during deployment. 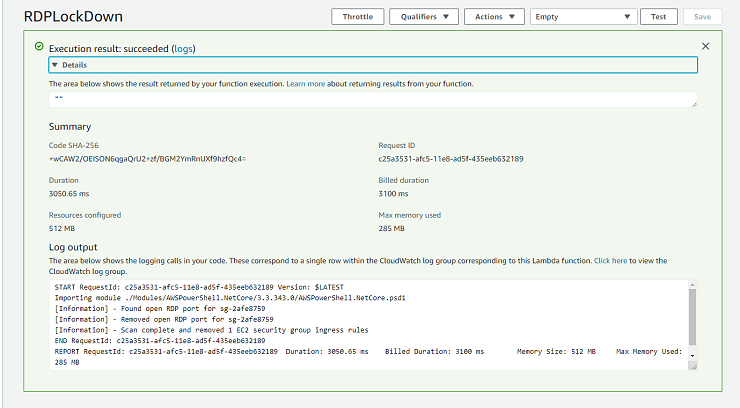 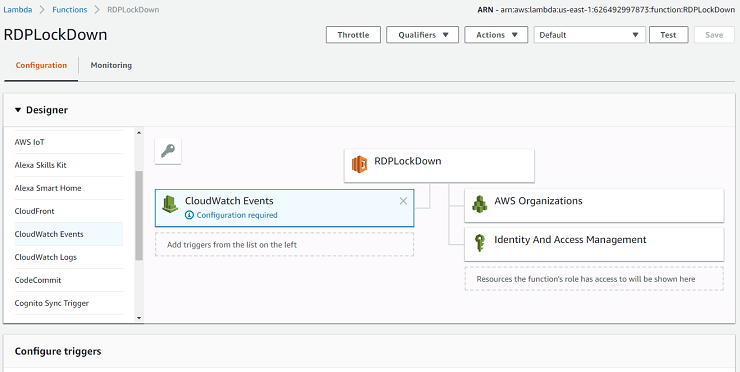 This opens a new Configure trigger panel to set up the schedule event. We’ll need to set the following fields.

With these fields set, go ahead and choose Add, and then choose Save for the Lambda function configuration change.

Now that our PowerShell based Lambda function is deployed and our trigger is set up to invoke our Lambda function every 5 minutes, we can monitor the invocations from the Monitoring tab in the Lambda console. 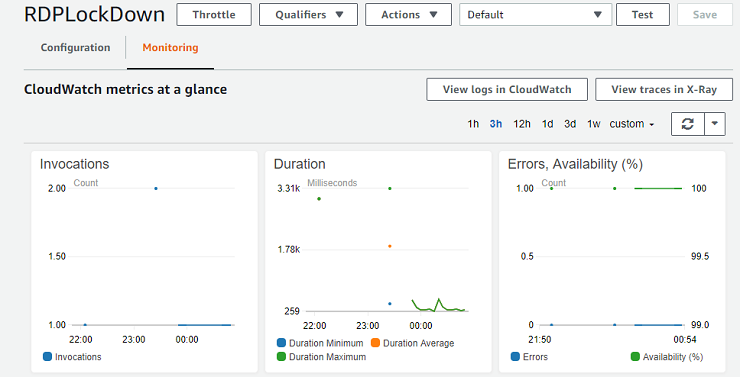 If you choose View logs in CloudWatch, you can see the log streams that have been created for the function. Choose the most recent stream to see our function’s logging. 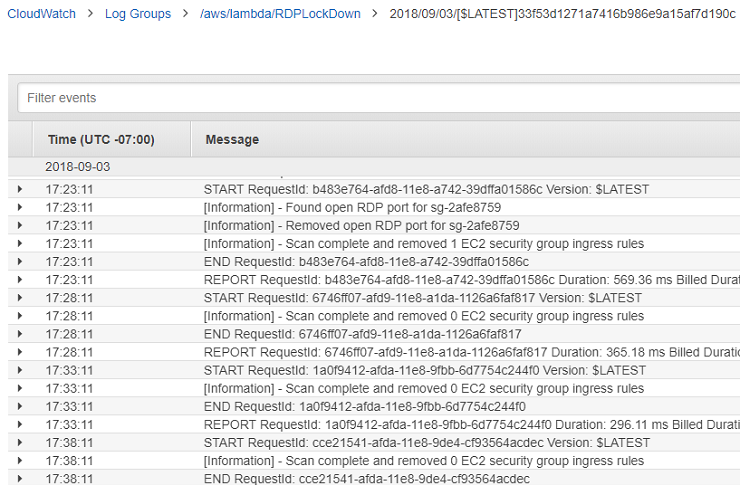 This post showed an example with the new PowerShell support for Lambda, where we can execute PowerShell scripts to manage an AWS account without managing any servers to execute the script.

We hope PowerShell developers are excited about the possibilities of using this new feature. We’re certainly excited to see what the PowerShell community does with it. We would love to hear from the community on our Lambda .NET GitHub repository, where these new tools and libraries are maintained.