On July 9, 2020, we introduced AWS Copilot, a new command line interface (CLI) to build, release, and operate production ready containerized applications on Amazon Elastic Container Service (Amazon ECS) and AWS Fargate. In this post, we walk you through how to communicate between microservices with service discovery using  AWS Copilot.

You can also refer to an earlier post, Introducing AWS Copilot, in which Nathan Peck explained some of the fundamental concepts of AWS Copilot.

To illustrate, we will build a fully functional application named “emoji-race” to display the most popular emojis on Twitter. The application will be composed of a “tracker”Backend Service that subscribes to a stream of Twitter emojis and stores the counts in memory, and an “api” frontend service that will accept requests from the internet and query the “tracker” service to send the top results back to the users.

Here is a screenshot of the “emoji-race” application, displaying the most popular emojis on Twitter. 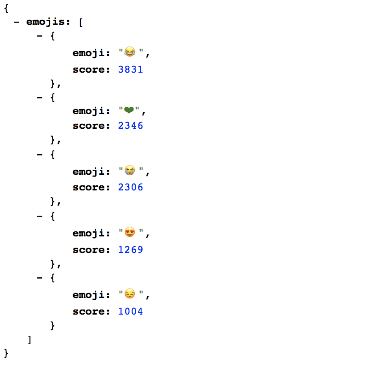 In order to implement the instructions laid out in this post, you will need the following:

AWS Copilot provides a simple declarative set of commands, including examples and guided experiences built in to help customers deploy quickly. AWS Copilot automates each step in the deployment lifecycle including pushing to a registry, creating a task definition, and creating a cluster. 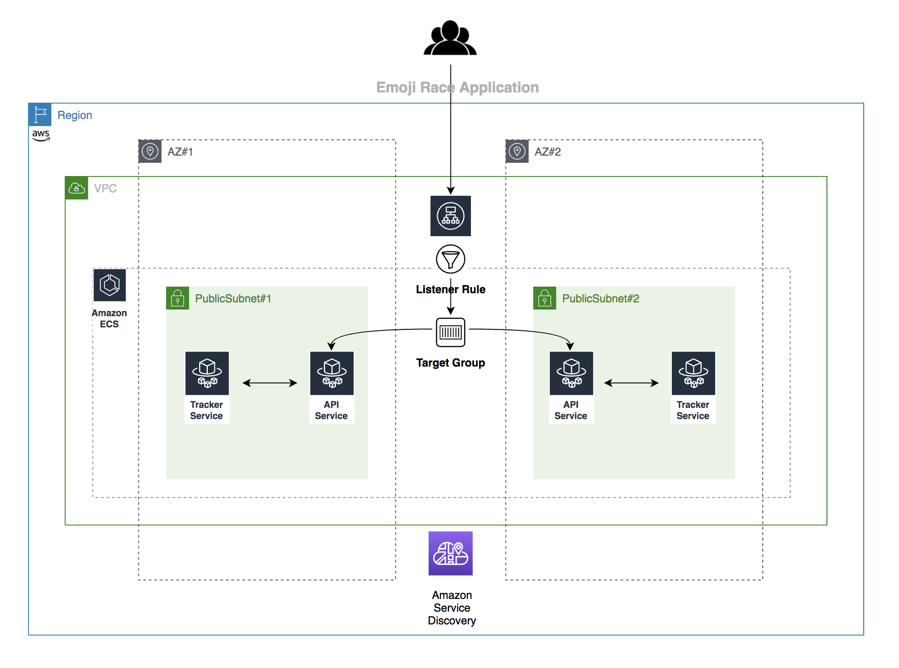 Here are the steps we’ll follow to implement the above architecture:

Log into the AWS Management Console and search for Cloud9 in the search bar. Click Cloud9 and create an AWS Cloud9 environment in the us-east-1 region based on Amazon Linux. Installing the AWS Copilot CLI currently requires you to download our binary from the GitHub releases page manually. In order to see the latest release of AWS Copilot, please use the link at: https://github.com/aws/copilot-cli/releases. At the time of writing this blog post, the current release is v0.3.0

Launch the AWS Cloud9 IDE. In a new terminal session, copy and paste these commands :

It is recommended to configure a default profile using the aws configure command as described here.

An application is just a namespace for a collection of related services. In our situation, we’ll create the “emoji-race” app.

✔ The directory copilot will hold service manifests for application emoji-race.

While initializing services, Copilot asks us what type of microservice we want to create. A “Load Balanced Web Service” is an internet-facing service that’s behind an Application Load Balancer, orchestrated by Amazon ECS on AWS Fargate. Whereas, a “Backend Service” is a private service that cannot be reached from the internet, but can be communicated to via service discovery within your Virtual Private Cloud (VPC).

We’ll first start by building our “tracker” service, which is a Node.js server subscribed to the Emojitracker stream to collect real-time Twitter emoji counts in memory. You can find the source code and the Dockerfile for the service here: https://github.com/efekarakus/emoji-race/tree/mainline/tracker.

We run copilot init and choose “Backend Service” as the type since we don’t want anybody from the internet to access this data.

What do you want to name this Backend Service? [? for help] tracker

Figure 3 – copilot init – choosing a Dockerfile for your service

Copilot will create a manifest file under the copilot/tracker folder as indicated in Figure 4. Copilot will now prompt us to create a “test” environment.

Enter “y”  to create a test environment and then deploy the service to it.

Would you like to deploy a test environment? [? for help] (y/N) y

Copilot will create a “test” environment using CloudFormation as shown in Figure 5. This environment will contain all the shared infrastructure between services such as a VPC, an ECS Cluster, load balancers, and a Service Discovery Namespace for private service-to-service communication.

Once the “test” environment is created, Copilot will create a docker image for the “tracker” microservice and push it to Amazon ECR.

Finally, the service deployment will kick off to create the ECS service.

Each new service created with Copilot will get its own endpoint under the Service Discovery namespace and follows the naming pattern: : {service name}.{application name}.local. For example tracker.emoji-race.local can be used to resolve to a private IP address of the “tracker” service within the VPC.

Once the deployment is finished, we can run copilot svc show --name tracker to see the configuration information for the deployed service as shown in Figure 8.

Next, we need to create our “api” service to accept requests from the internet. Since the information is stored in the “tracker” service, our new “api” service needs to communicate with it. We can leverage the service discovery endpoint that Copilot injects as an environment variable in our code:

Now that we know how to handle the code to communicate between our two services, we’ll run copilot init to deploy our “api” service.

Since we have already created an application earlier, Copilot will recognize that and it will print a message as :
"Your workspace is registered to application emoji-race."

What do you want to name this Load Balanced Web Service? [? for help] api

It will prompt you for a name for this microservice, use “api“ and hit enter.

Copilot will prompt you to pick up the relevant Dockerfile. Choose “api/Dockerfile” from the list and hit enter.

Which Dockerfile would you like to use for api? [Use arrows to move, type to filter, ? for more help]
> api/Dockerfile
tracker/Dockerfile

Copilot will create a manifest file as “copilot/api/manifest.yml.” At this point, Copilot will give an option of adding this microservice to the test environment. Choose “y.” 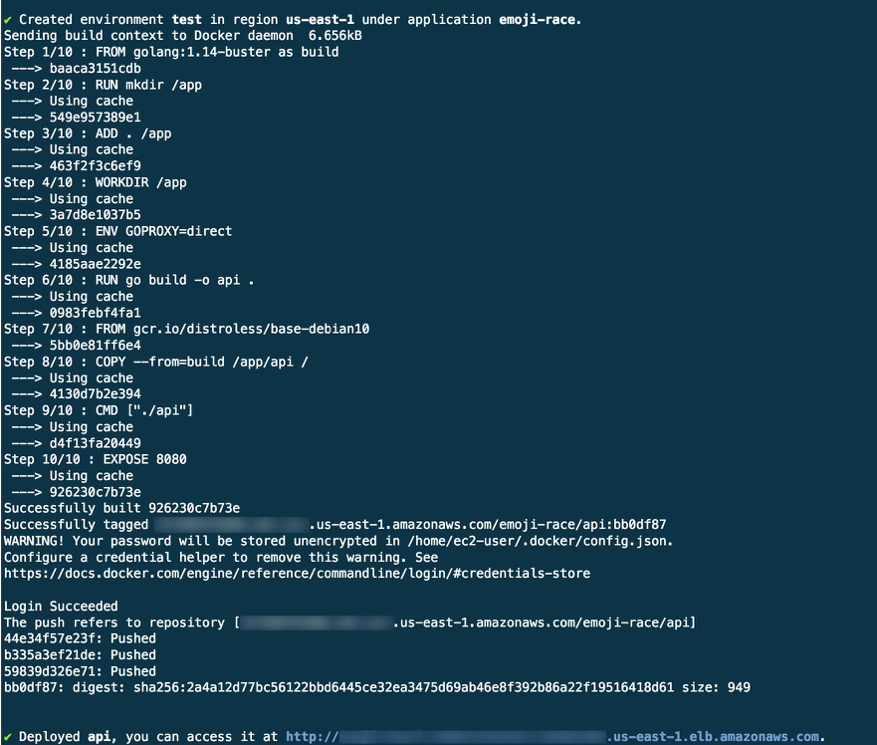 Once the deployment is finished, you can view the complete application by copying and pasting the Application Load Balancer url of the deployed api shown in Figure 10 inside your browser window.

We can also access the application from the internet by using curl as shown below.

In this post we showed how we can use AWS Copilot to:

Copilot also provides operational commands such as copilot svc logs and copilot svc status to show the health of your services. Finally, with Copilot, you also get an easy way of creating a continuous delivery pipeline to release your microservices to multiple AWS accounts and regions.

To learn more, check out this blog post: Automatically deploying your container application with AWS Copilot.