We can now use Amazon Simple Queue Service (SQS) to trigger AWS Lambda functions! This is a stellar update with some key functionality that I’ve personally been looking forward to for more than 4 years. I know our customers are excited to take it for a spin so feel free to skip to the walk through section below if you don’t want a trip down memory lane.

SQS was the first service we ever launched with AWS back in 2004, 14 years ago. For some perspective, the largest commercial hard drives in 2004 were around 60GB, PHP 5 came out, Facebook had just launched, the TV show Friends ended, GMail was brand new, and I was still in high school. Looking back, I can see some of the tenets that make AWS what it is today were present even very early on in the development of SQS: fully managed, network accessible, pay-as-you-go, and no minimum commitments. Today, SQS is one of our most popular services used by hundreds of thousands of customers at absolutely massive scales as one of the fundamental building blocks of many applications.

AWS Lambda, by comparison, is a relative new kid on the block having been released at AWS re:Invent in 2014 (I was in the crowd that day!). Lambda is a compute service that lets you run code without provisioning or managing servers and it launched the serverless revolution back in 2014. It has seen immediate adoption across a wide array of use-cases from web and mobile backends to IT policy engines to data processing pipelines. Today, Lambda supports Node.js, Java, Go, C#, and Python runtimes letting customers minimize changes to existing codebases and giving them flexibility to build new ones. Over the past 4 years we’ve added a large number of features and event sources for Lambda making it easier for customers to just get things done. By adding support for SQS to Lambda we’re removing a lot of the undifferentiated heavy lifting of running a polling service or creating an SQS to SNS mapping.

Let’s take a look at how this all works.

First, I’ll need an existing SQS standard queue or I’ll need to create one. I’ll go over to the AWS Management Console and open up SQS to create a new queue. Let’s give it a fun name. At the moment the Lambda triggers only work with standard queues and not FIFO queues.

Now that I have a queue I want to create a Lambda function to process it. I can navigate to the Lambda console and create a simple new function that just prints out the message body with some Python code like this:

Next I need to add the trigger to the Lambda function, but before I can do that I need to make sure my AWS Identity and Access Management (IAM) execution role for the function has the correct permissons to talk to SQS. The details of creating that role can be found in our documentation. With the correct permissions in place I can add the SQS trigger by selecting SQS in the triggers section on the left side of the console. I can select which queue I want to use to invoke the Lambda and the maximum number of records a single Lambda will process (up to 10, based on the SQS ReceiveMessage API). 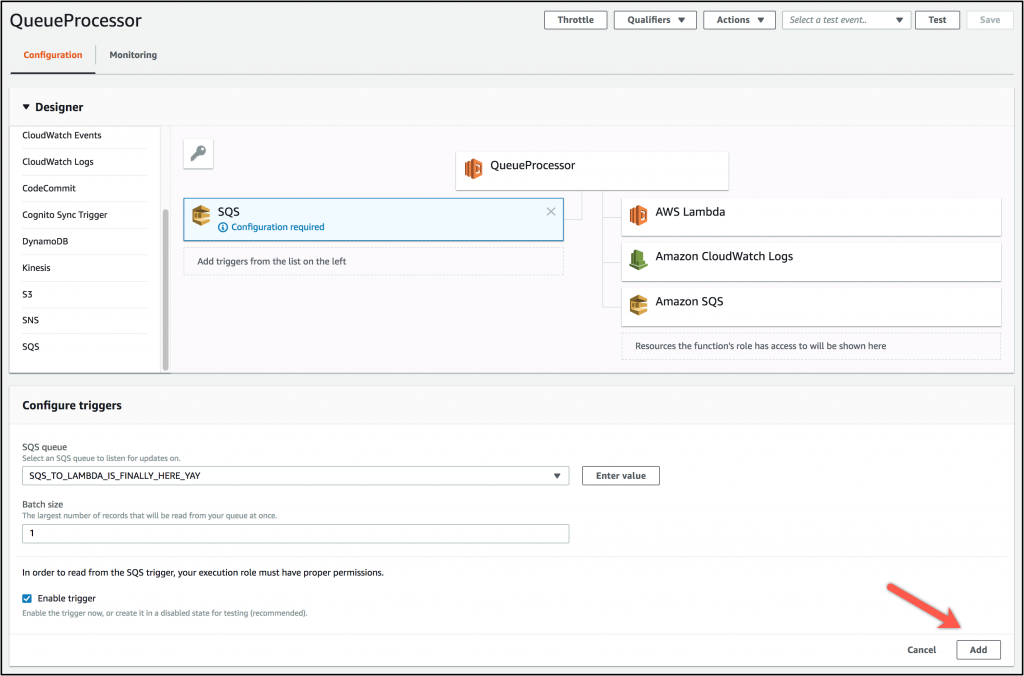 Lambda will automatically scale out horizontally consume the messages in my queue. Lambda will try to consume the queue as quickly and effeciently as possible by maximizing concurrency within the bounds of each service. As the queue traffic fluctuates the Lambda service will scale the polling operations up and down based on the number of inflight messages. I’ve covered this behavior in more detail in the additional info section at the bottom of this post. In order to control the concurrency on the Lambda service side I can increase or decrease the concurrent execution limit for my function.

Now that I have the trigger set up I’ll use the AWS CLI to enqueue a simple message and test the functionality:

My Lambda receives the message and executes the code printing the message payload into my Amazon CloudWatch logs.

Of course all of this works with AWS SAM out of the box.

There are no additional charges for this feature, but because the Lambda service is continuously long-polling the SQS queue the account will be charged for those API calls at the standard SQS pricing rates.

So, a quick deep dive on concurrency and automatic scaling here – just keep in mind that this behavior could change. The automatic scaling behavior of Lambda is designed to keep polling costs low when a queue is empty while simultaneously letting us scale up to high throughput when the queue is being used heavily. When an SQS event source mapping is initially created and enabled, or when messages first appear after a period with no traffic, then the Lambda service will begin polling the SQS queue using five parallel long-polling connections. The Lambda service monitors the number of inflight messages, and when it detects that this number is trending up, it will increase the polling frequency by 20 ReceiveMessage requests per minute and the function concurrency by 60 calls per minute. As long as the queue remains busy it will continue to scale until it hits the function concurrency limits. As the number of inflight messages trends down Lambda will reduce the polling frequency by 10 ReceiveMessage requests per minute and decrease the concurrency used to invoke our function by 30 calls per-minute.

This feature is immediately available in all regions where Lambda is available.

As always, we’re excited to hear feedback about this feature either on Twitter or in the comments below. Finally, I just want to give a quick shout out to the Lambda team members who put a lot of thought into the integration of these two services.