10-Sep-2021: With recent enhancements to VPC routing primitives and how it unlocks additional deployment models for AWS Network Firewall along with the ones listed below, read part 2 of this blog post here. 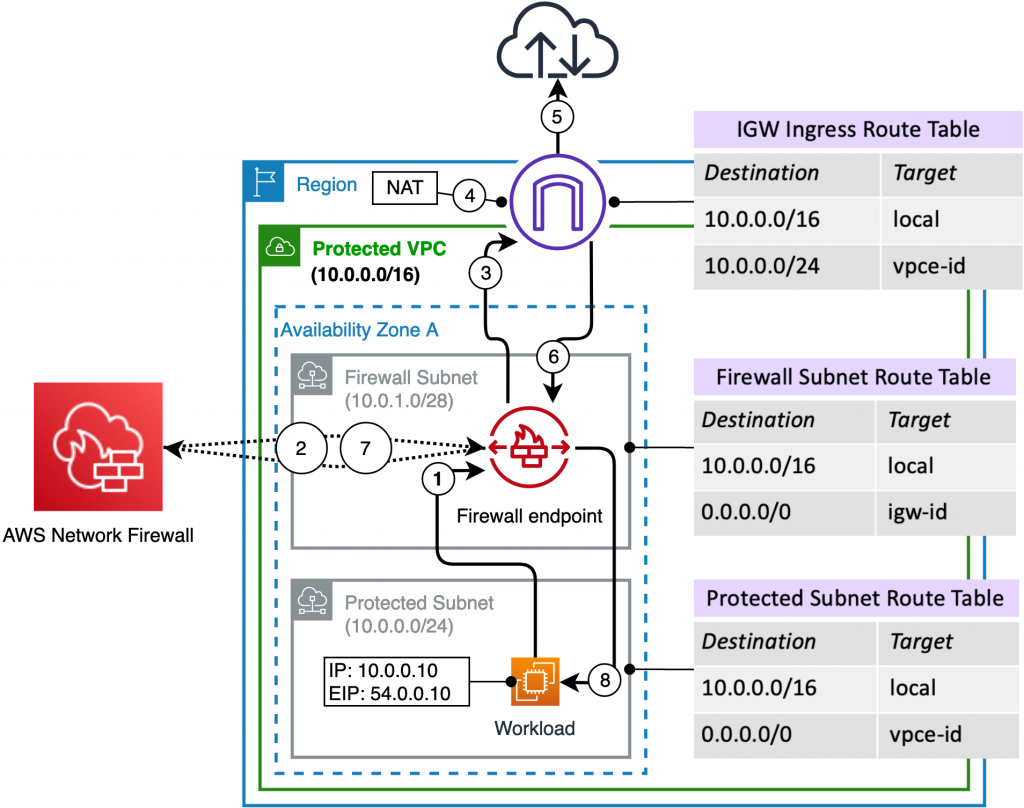 Figure 1: AWS Network Firewall deployed in a single AZ and traffic flow for a workload in a public subnet

AWS Network Firewall is completely transparent to the traffic flow and does not perform network address translation (NAT). It preserves source and destination IP addresses.

There are multiple deployment models available with AWS Network Firewall. The right model depends on the use case and requirements. The following models are most common:

For the distributed deployment model, we deploy AWS Network Firewall into each VPC which requires protection. Each VPC is protected individually and blast radius is reduced through VPC isolation. Each VPC does not require connectivity to any other VPC or AWS Transit Gateway. Each AWS Network Firewall can have its own firewall policy or share a policy through common rule groups (reusable collections of rules) across multiple firewalls. This allows each AWS Network Firewall to be managed independently, which reduces the possibility of misconfiguration and limits the scope of impact.

Depending on the workload and traffic pattern, there are a number of AWS Network Firewall deployment models to consider. Below are those models.

With this deployment model, AWS Network Firewall is used to protect any internet-bound traffic. The workload subnet has the default route to the firewall endpoint in the corresponding AZ. The firewall subnet has default route via IGW. Since AWS Network Firewall doesn’t perform NAT, ingress and egress to the internet depends on public IPs or EIPs associated to individual elastic network interfaces (ENIs) in the workload subnet. Finally, IGW has ingress route table associated to it. Route table has entry for each protected subnet directing traffic to firewall endpoint in the corresponding AZ. This ensures that traffic is symmetrically returned to the right firewall endpoint to maintain stateful traffic inspection. 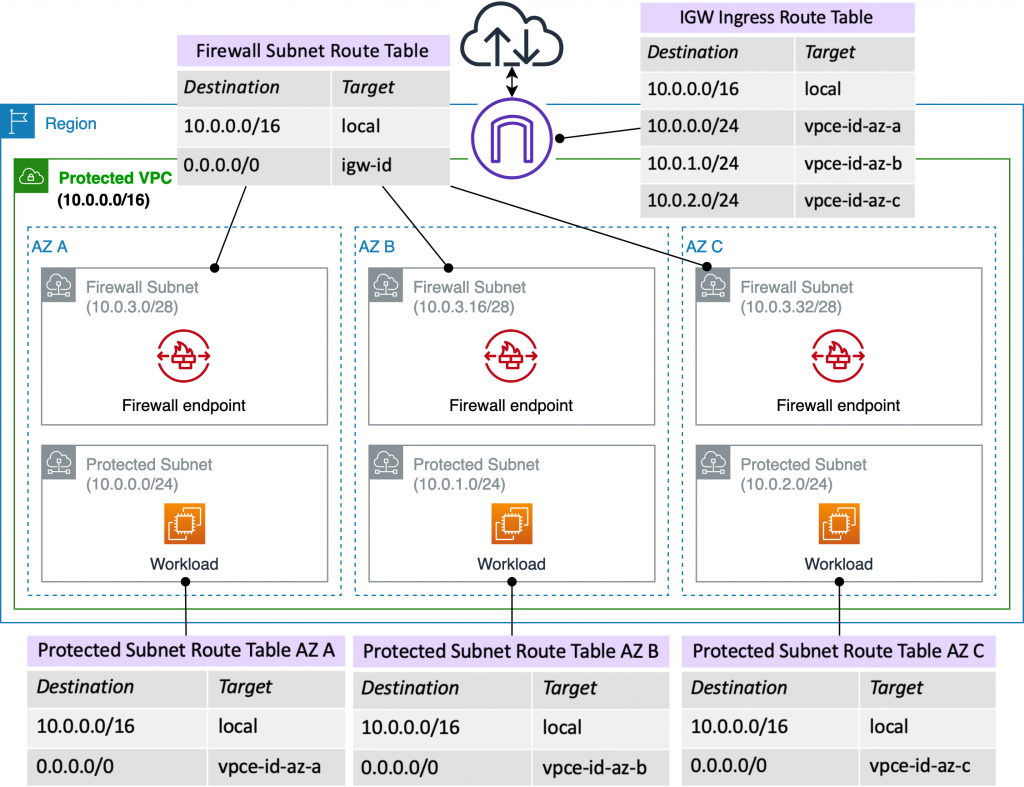 AWS Network Firewall can also be deployed to protect AWS services such Application Load Balancer (ALB) and NAT gateway. With ALB, backend targets could be deployed within private subnets. Any traffic between ALB and the internet is inspected by AWS Network Firewall before delivery to backend targets. Similarly, NAT gateway could be placed in the protected public subnet. NAT gateway is a default route table target in the private subnet route table. Traffic between NAT gateway and the internet is inspected. To maintain Multi-AZ, NAT gateway is also deployed in each AZ. 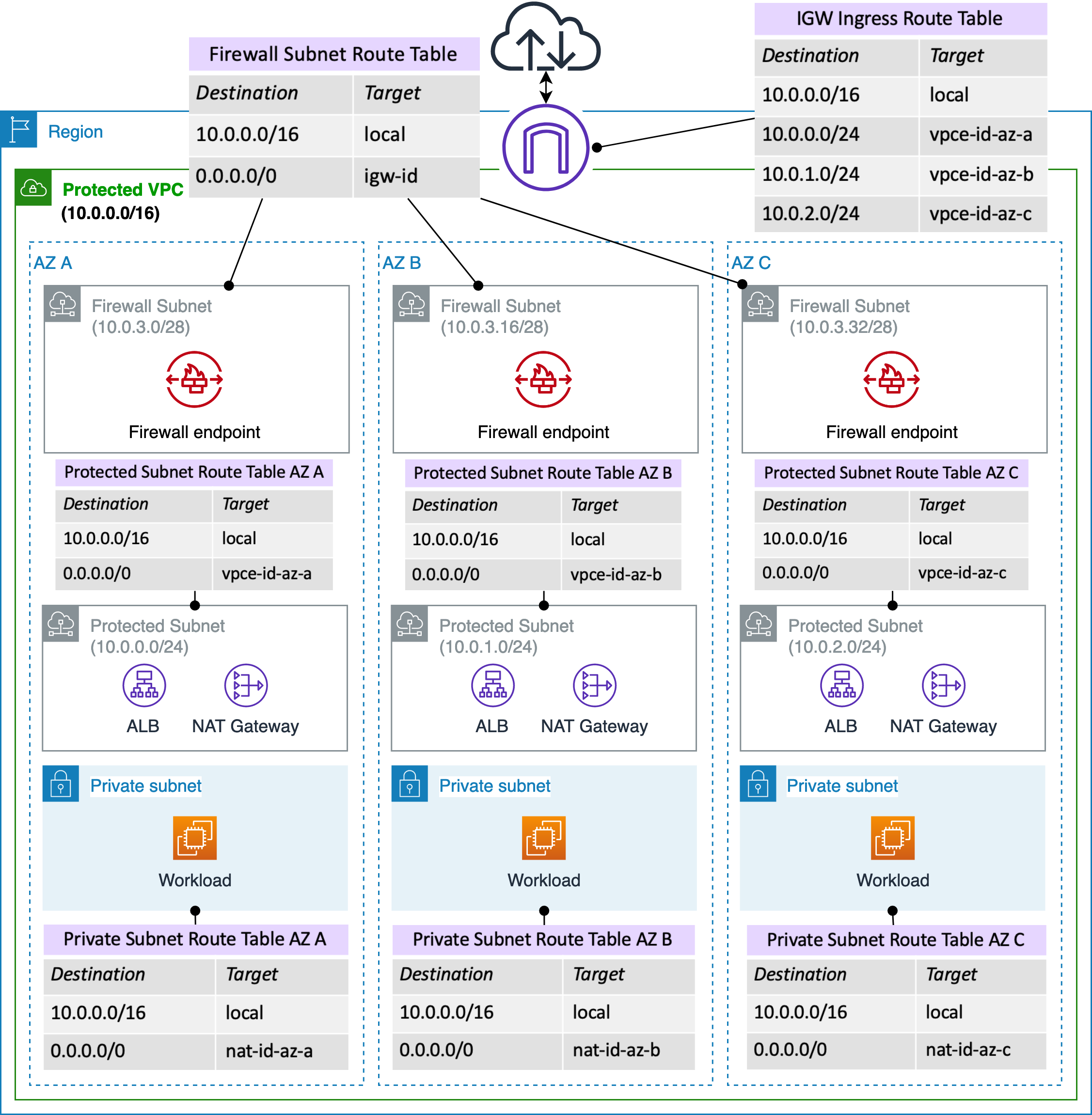 Figure 4: AWS Network Firewall is deployed to inspect traffic between the internet and ALB/NAT gateway

Note that, with either ALB or NAT Gateway in Figure 4, the source IP of workload ENI is not preserved. AWS Network Firewall sees source IP of NAT gateway or ALB. If workload source IP visibility is required, use the centralized internet egress and ingress deployment model discussed later in this blog post. 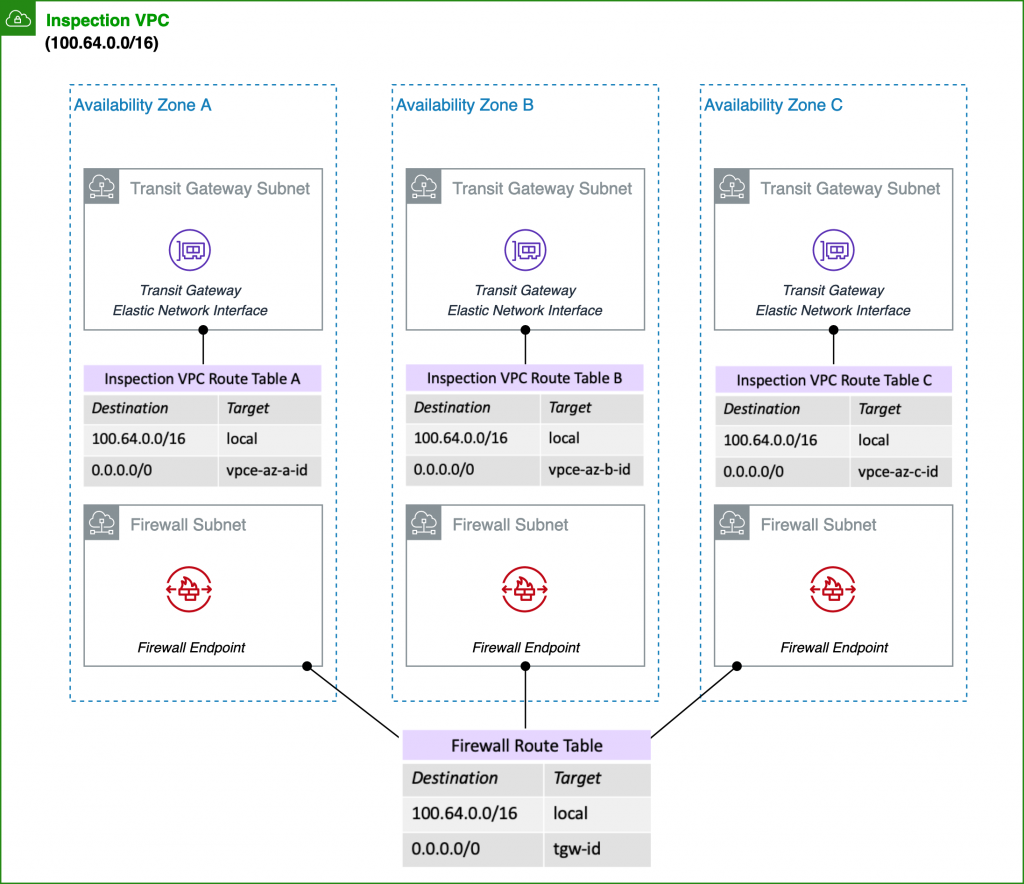 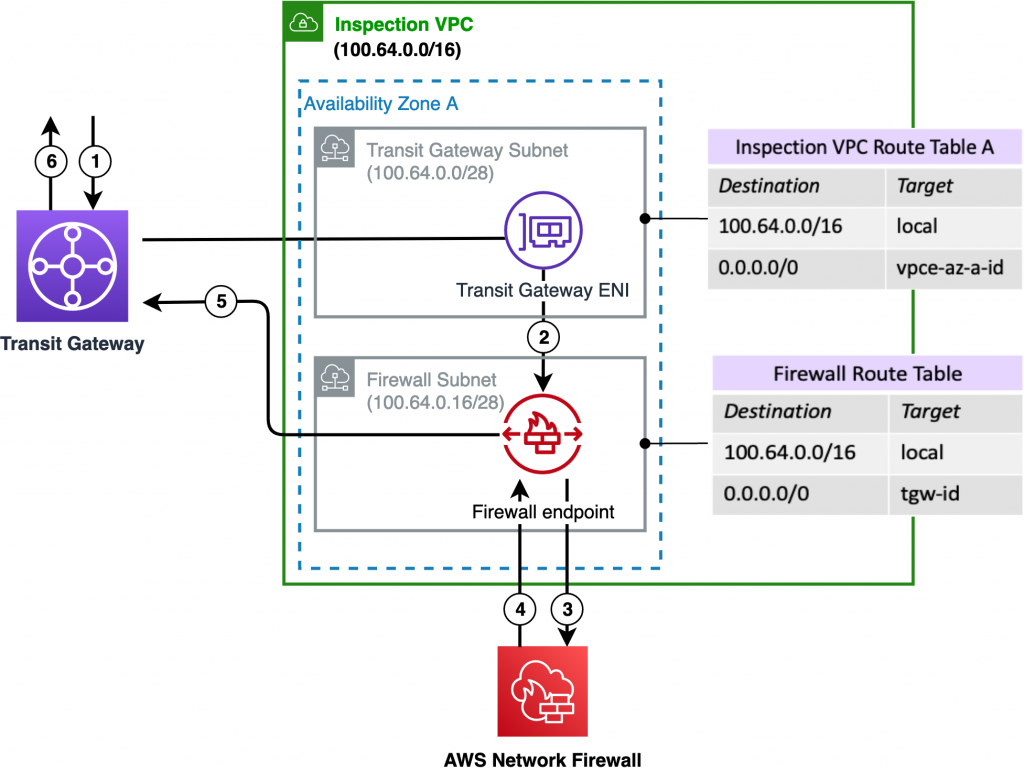 Inspection VPC CIDR doesn’t need to be routable since AWS Network Firewall is completely transparent to network traffic. In our example, we used CGNAT range (100.64.0.0/16) to preserve IP addresses. Avoid using inspection VPC for any other workload. Inside inspection VPC, AWS Network Firewall maintains stateful traffic inspection capability. This is possible due to a new feature: AWS Transit Gateway appliance mode. This feature ensures that return traffic is processed by the same AZ. Make sure to enable it by following this documentation.

Note: HOME_NET rule group variable is used to define source IP range eligible for processing in Stateful Domain list and optionally Suricata compatible IPS Rule Groups. By default, it is set to the VPC CIDR where firewall endpoints are deployed. With centralized deployment model, this variable must be expanded to include all CIDR ranges of your VPCs and on-premises networks to make them eligible for processing. See documentation for more details.

This model covers requirements where there’s a need to inspect East-West traffic. For example, VPC to VPC in the same or different AWS Accounts using AWS Transit Gateway.

You can use the same model for inspection of traffic to other AWS Regions using AWS Transit Gateway Inter-Region Peering feature as shown in Figure 8. Remote AWS Regions are treated as spokes. 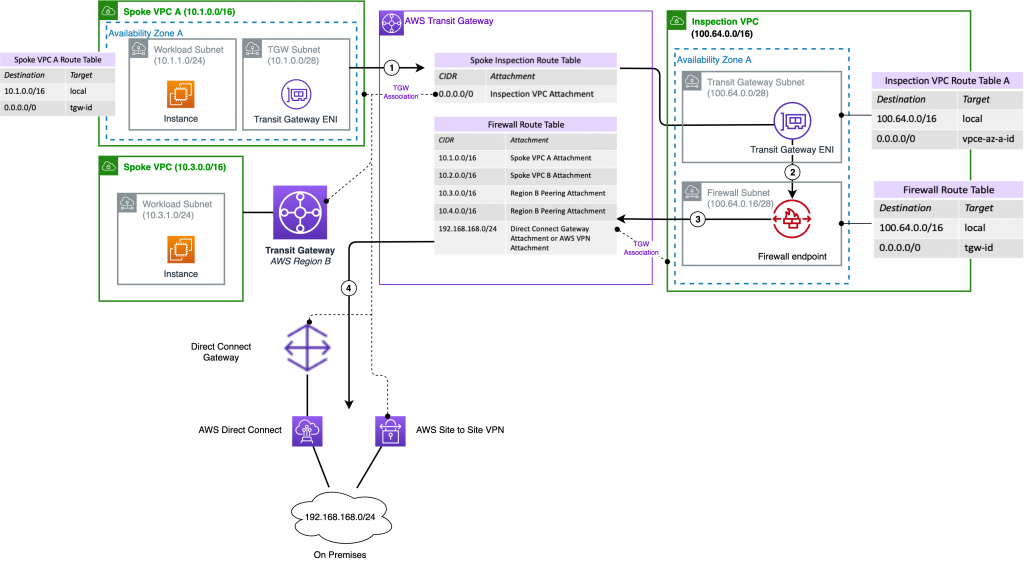 Using AWS Transit Gateway Routing Tables functionality, AWS Direct Connect/VPNs are attached to spoke route table. In other words, they are treated as spokes again. For return traffic from inspection VPC to work, propagate the routes learned from Direct Connect gateway and/or VPN attachments to the firewall route table as shown in Figure 9.

This model covers the inspection for North-South internet bound traffic from AWS Transit Gateway attachments. For this model, we also have a dedicated, central egress VPC which has NAT gateway configured in a public subnet with access to IGW.

You can use NAT gateway to enable workloads in private subnets from spoke VPCs to connect to internet or AWS services in public IP space. You can also use NAT instance or a partner solution from AWS Marketplace instead of NAT gateway. You can find more information about different partners under the AWS Network Competency Program. 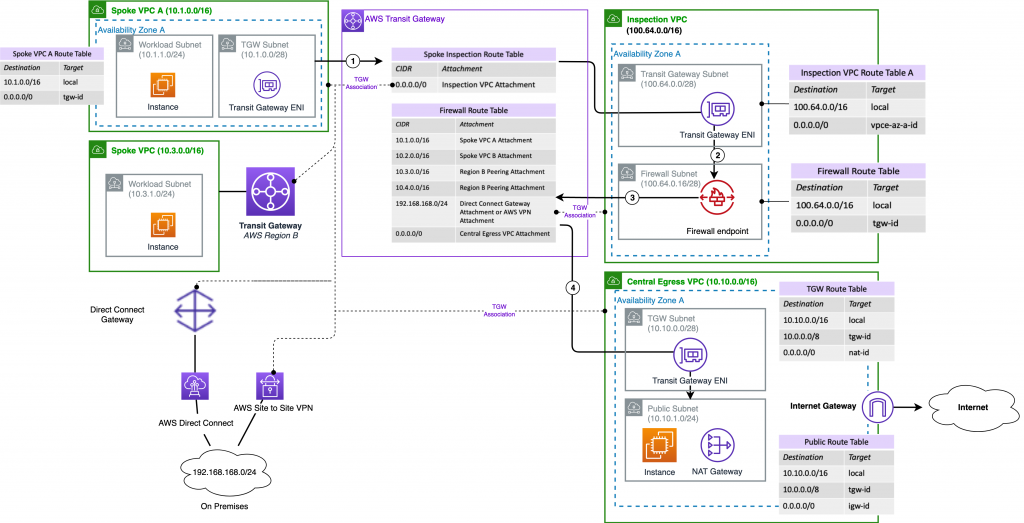 Note that it is also possible to deploy AWS Network Firewall inside the central egress VPC which is covered in the combined deployment model.

For traffic originating outside of your AWS environment inbound to your workloads, it’s possible to centralize ingress. In this scenario, a marketplace network appliance such as a Web Application Firewall (WAF) or a third-party Load Balancer (LB) is deployed into a centralized Ingress VPC. The appliance terminates the connection and establishes a new connections to the backend instance (also known as reverse proxy). This approach allows introduction of application logic between client and a server and also could be used for security purposes. It is possible to deploy AWS services such as ALB and Network Load Balancer (NLB) in this configuration. The major difference with this deployment model is that the source IP is not preserved and ALB/NLB use IPs as targets (as opposed to EC2 instance IDs). Figure 11 shows the possible architecture of ingress VPC combined with AWS Network Firewall in centralized deployment model. 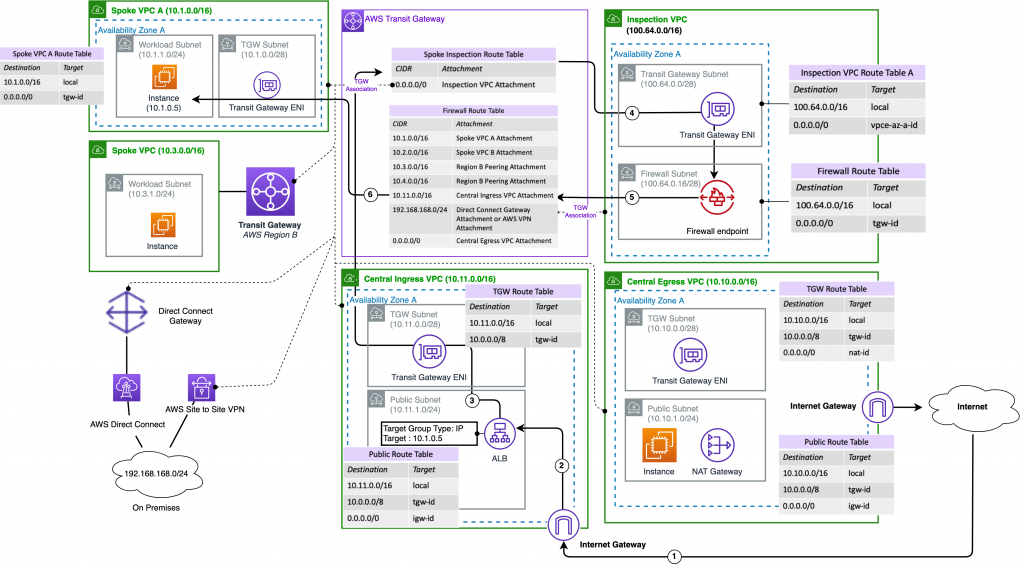 Note that it is also possible to deploy AWS Network Firewall inside the central ingress VPC which is covered in the combined deployment model.

For combined centralized and distributed deployment model, we can deploy AWS Network Firewall in the central inspection VPC and also in each VPC which requires local internet ingress and/or egress. In this model, workloads can use local IGW and connect to internal networks (VPCs, on-premises) through the centralized inspection VPC. Private subnets in such VPC retain an option to use centralized internet egress VPC.

Public subnets can be protected by AWS Network Firewall as previously discussed. With this architecture, load balancers such as ALB and NLB can target containers and applications in EC2 Auto Scale groups without any additional configuration to track target IPs. We can also have a local internet egress for private subnet with NAT gateway where required, but consider deploying it when convenience of having centralized egress VPC is outweighed by cost factors. In the Figure 12, spoke VPC B has local IGW and firewall endpoint to protect public subnets. 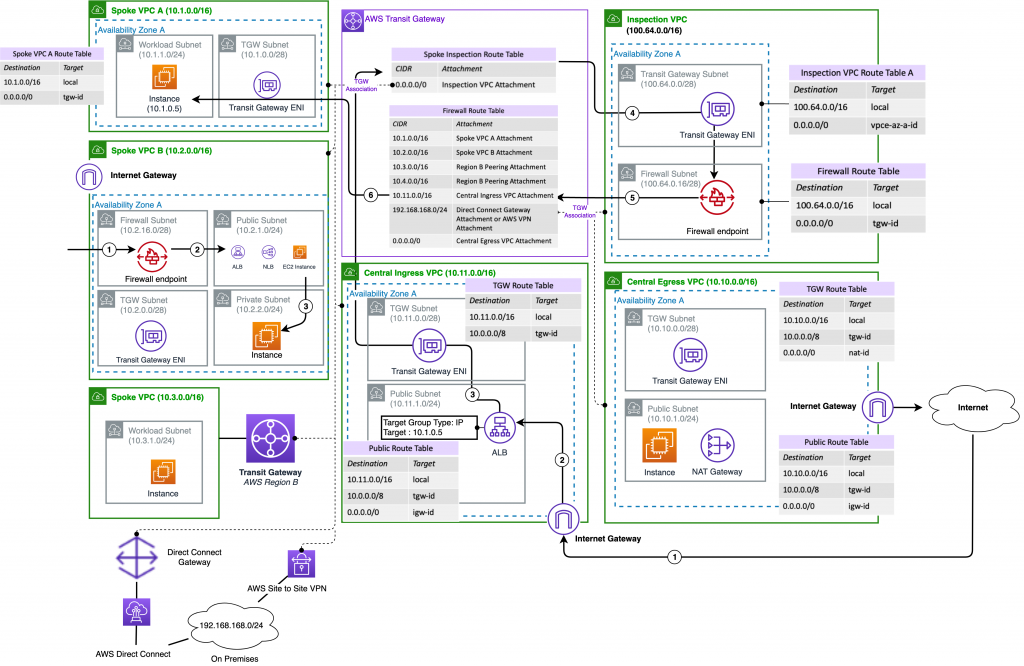 Some customers may wish to have centralized internet egress protected by AWS Network Firewall and a separate instance of the AWS Network Firewall for East-West traffic. In this case, there is a cost saving with this architecture in terms of data processing cost reduction as traffic goes directly from a source VPC to centralized egress VPC without using inspection VPC. 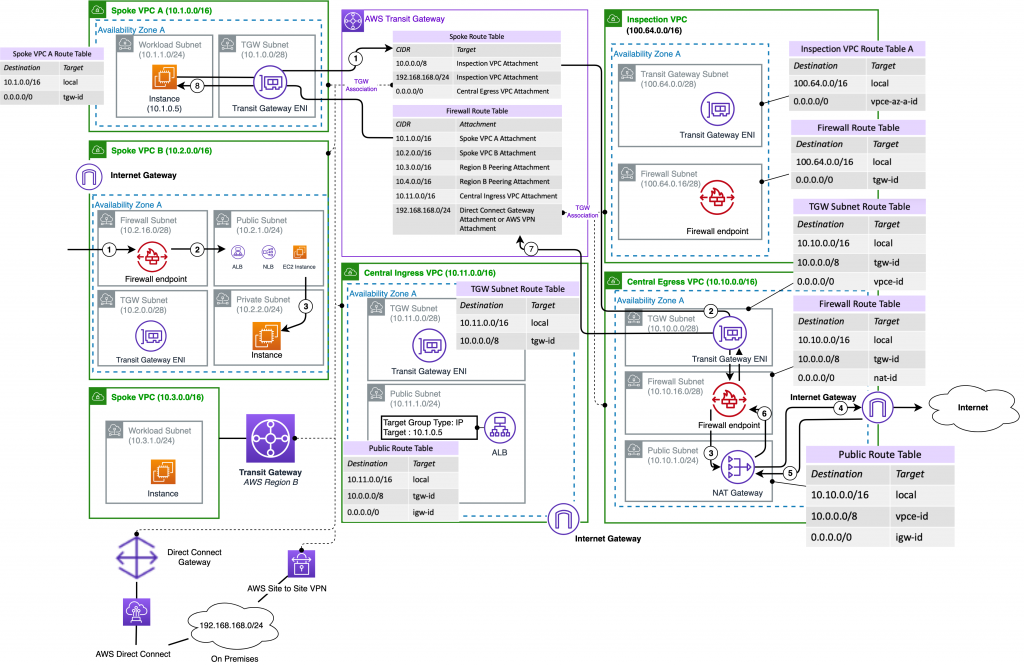 The following table can help you to decide which deployment model is most applicable for your use case.

Key considerations with any AWS Network Firewall deployment model are:

AWS Network Firewall provides the ability to transparently inspect traffic at scale in a variety of use cases. The right deployment model depends on the desired outcome. AWS Network Firewall can be deployed to a single VPC or multi-VPCs architectures and it scales to traffic requirements with both distributed and centralized deployment models. This is achieved through uniquely designed software defined network services like Amazon VPC and AWS Hyperplane combined together with AWS Network Firewall. The centralized management and traffic inspection could benefit large organizations that require additional network security capabilities.

Shakeel Ahmad is a Senior Solutions Architect based out of Melbourne, Australia specializing in Networking & Cloud Infrastructure. He has a BS in Computer Science and a Master of Science in Network Systems. He’s passionate about technology and helping customers architect and build solutions to adopt the art of the possible on AWS.