In the telecommunications industry, real-time communication (RTC) refers to live media sessions between two endpoints with minimum latency and jitter. These sessions could be for voice, instant messaging or live video.

Each of these solutions consists of one or more signaling message exchanges that control the call (e.g., authentication, authorization and access control, transcoding, or buffering) and one or more media streams carrying audio, video, or other data. Together, these streams make up a session, which is placed inside internet protocol (IP) packets.

Global Accelerator uses the AWS global network to optimize the path from your users to your applications, improving the performance of your TCP and UDP traffic. Global Accelerator also continually monitors the health of your application endpoints, and detects an unhealthy endpoint and redirects traffic to healthy endpoints in less than one minute.

In this blog post I describe how CrazyCall, a cloud-based calling software company, improves performance for their real-time application by using Global Accelerator.

CrazyCall’s cloud-based calling software allows their customers to easily build a reliable helpline, quickly contact customers, and generate leads directly from websites. CrazyCall serves companies of all types, focusing on small-to-medium businesses who want to use the power of phone system and reach their audience worldwide. CrazyCall strives in providing a high-quality experience to all of their customers around the globe.

CrazyCall’s software is based on Kamailio and FreeSWITCH. Kamailio is an open source Session Initiation Protocol (SIP) server released under GPL, able to handle thousands of call setups per second. FreeSWITCH is an open source communication platform that allows to connect to customers and can run on any modern platform.

CrazyCall operates a multi-region network. The setup is deployed in two AWS Regions: eu-central-1 and eu-west-1. It is a distributed environment with Kamailio running on Amazon Elastic Container Service (Amazon ECS), and RTPEngine and FreeSWITCH running on Amazon EC2 instances. 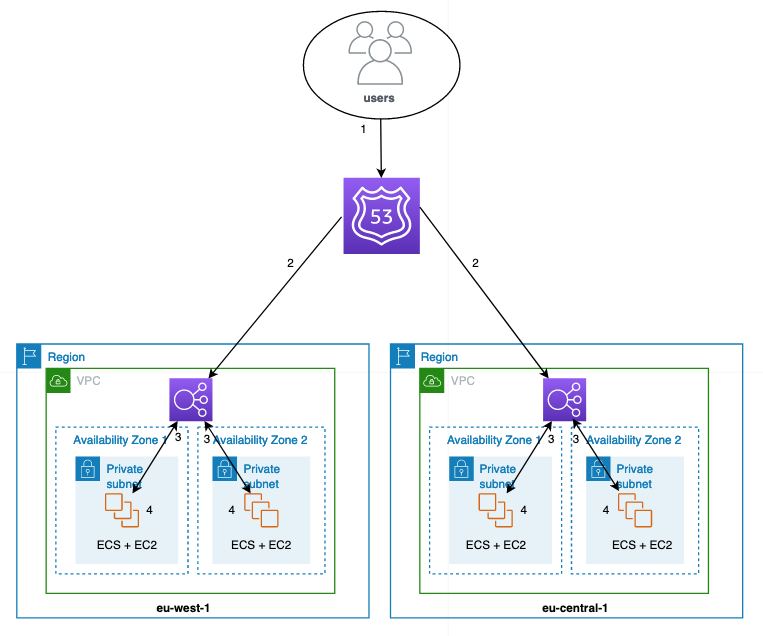 Challenges with the existing solution:

For their real-time application to perform optimally, CrazyCall required a reliable internet connection with consistent network performance. One way to reduce latency and jitter is to reduce the number of hops between the user and the application. It is important to note that points mentioned later in this post are inherent to all DNS-based routing techniques and are not specific to Amazon Route 53.

CrazyCall integrated their implementation with Global Accelerator and Amazon Route 53 to achieve improved network performance. Global Accelerator directs user traffic to the nearest application endpoint, thus reducing internet latency and jitter. VoIP traffic from the user is routed to the closest edge location via Anycast. Traffic is then routed to the closest AWS Region hosting CrayzCall’s environment over the AWS global network. 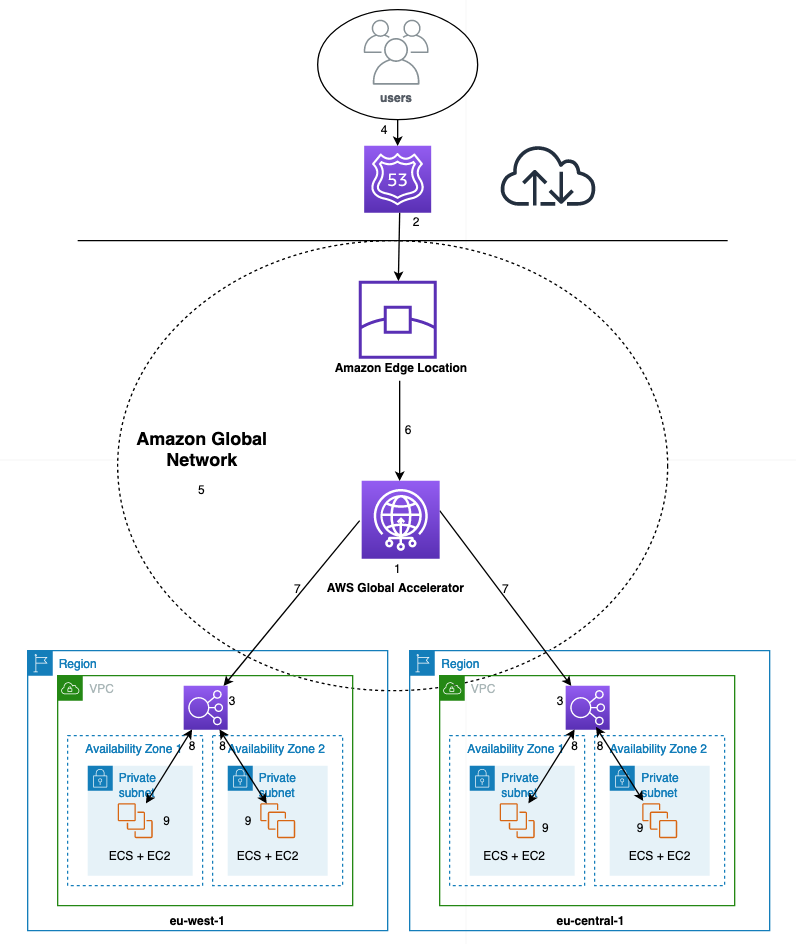 As described in Figure 3, CrazyCall:

“We use Global Accelerator’s static anycast IPs and global network to handle Voice over IP (VoIP) traffic, thus ensuring that our customers get the best quality of service.”