Pipelines are crucial to the oil and gas industry across upstream, midstream, and downstream sectors. For industries like oil and gas, the pipeline network forms the backbone for transportation, and corrosion in these pipelines pose a significant challenge. Inspections on pipelines help companies identify potential failures and proactively remediate issues to minimize business operations. These monitoring activities are labor-intensive since they are usually carried out manually onsite, and proactive maintenance is a significant operational expense.

In this post, you learn how to build an end-to-end pipeline monitoring solution AWS IoT Core where ultrasonic sensor data flows into AWS IoT Core, and the AWS Lambda function processes the data. Then it gets stored in Amazon S3 with a corrosion measurement point, corrosion value, and timestamp.

Using AWS IoT Core and analytics services, customers can reduce the operational expense for pipeline monitoring and save time. The following technology use case specifically targets in-plant pipelines. However, it can be applied to a broader range of use cases involving infrastructure where IoT sensors measure specific parameters.

The solution has been conceptualized for in-plant pipelines and uses ultrasonic sensors placed at regular intervals on the pipeline’s external surface. The ultrasonic sensors capture pipeline thickness and transmit data in real time via IoT Gateway (we used Kepware IoT gateway for this project, but customers can use any IoT gateway) into AWS IoT for storage and analytics.

This solution provides an automated way to monitor pipeline thickness periodically using the data provided by ultrasonic sensors and stores this data into Amazon S3 for durable storage. It also provides a visual dashboard using Amazon QuickSight. This solution continuously checks the predefined pipeline thickness limits and triggers email and mobile notifications to the operations team. AWS Lambda and Amazon Simple Notification Service (Amazon SNS) provides these notifications as soon as there is a limit breach.

The components of this solution are:

You follow these steps to build an end-to-end data pipeline:

In the preceding diagram, we are configuring IoT gateway to receive periodic data from ultrasonic sensors and batch them before publishing it to AWS IoT Core.

Note: AWS IoT Core provides a feature to generate an SSL certificate and configure with Kepware to connect to the endpoint of AWS IoT Core.

In this section, you create an AWS IoT rule that sends MQTT message data to an Amazon SNS topic so that it can be sent as an email or AWS SMS text message.

The following rule sends the new message payload as a JSON document to an SNS topic, which notifies all subscribers to the SNS topic. 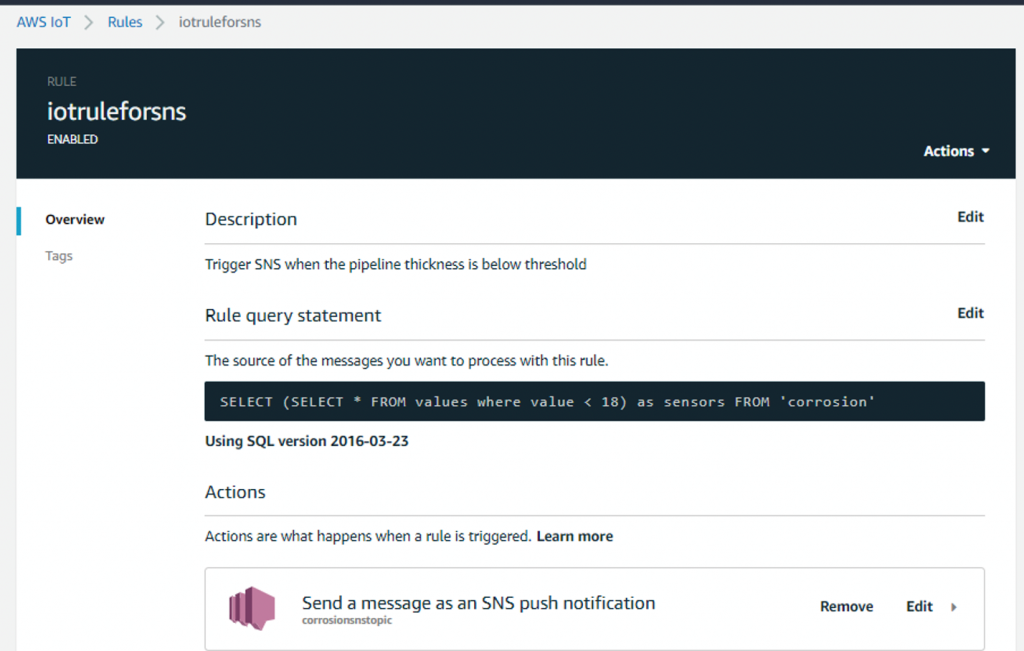 The following image shows a sample email received from Amazon SNS with the payload for the operation team which has details about the sensor id, report time and the actual thickness (which is below the configured threshold).

Store and format the sensor data (corrosion measurement point, wall thickness value and timestamp) using the AWS Lambda function in Amazon S3. The data stored in the bucket is encrypted using Server-Side Encryption with Amazon S3-Managed Keys (SSE-S3). Data is encrypted as soon as it lands in S3 bucket.

3. Create an IoT rule to trigger the Lambda function when new data arrives.

In the following screenshot, we are using a Lambda function to push data to S3 in JSON format so that it can easily be queried using Athena. 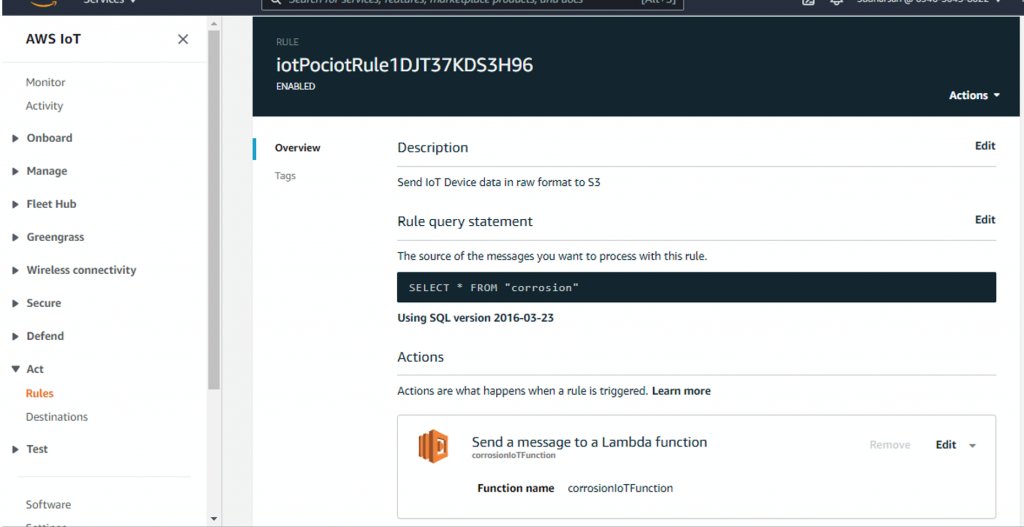 The following screenshot shows the data being pushed to the S3 bucket.

4.  Analyzing the Data with Athena

Use this database to create all Athena tables.

The following screenshot shows a table has been created successfully. 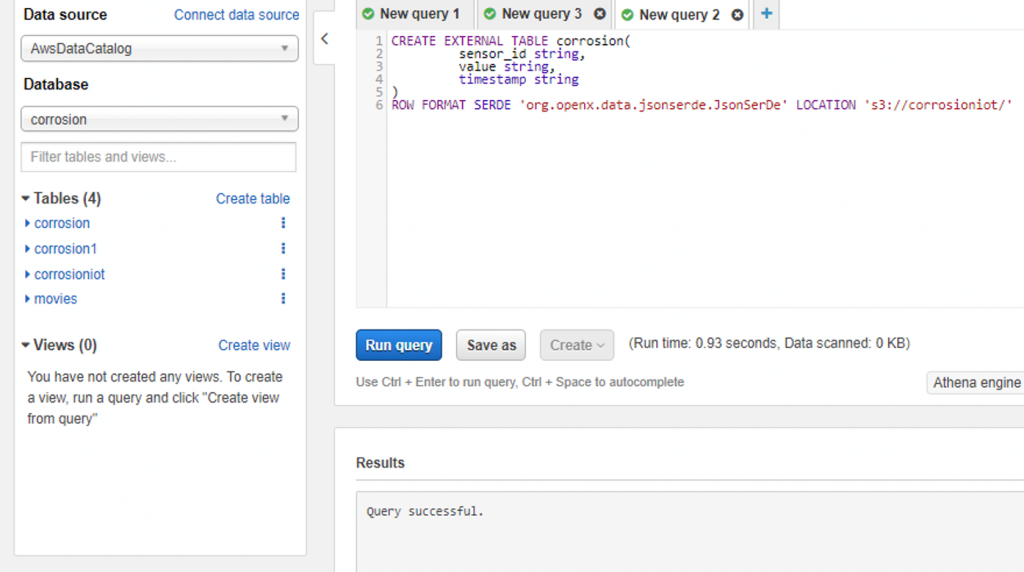 Use the below SQL query to fetch the sensor data: 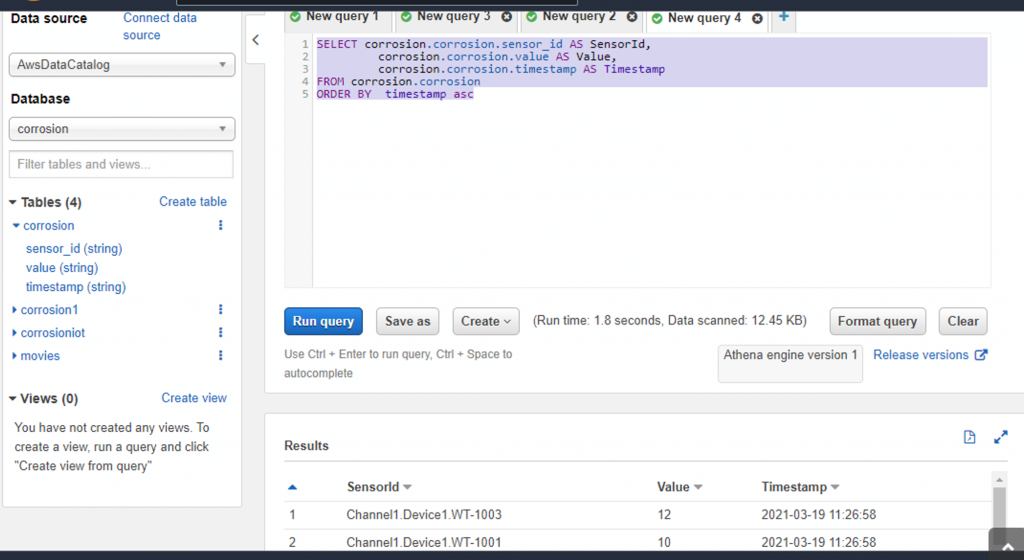 Using SQL query, sensor data has been pulled from S3 which will can be used for analysis by any business intelligence tool like AWS QuickSight.

QuickSight retrieves the sensor data from Amazon S3 using Athena based on the given date range. QuickSight is configured with Athena as data source and the graph is plotted to have timelines on x-axis and thickness values on y-axis.  The graph provides a consolidated view of all the pipeline thickness values across all sensors over a period of time.

As you have learned in this post, you can build an IoT-based automated pipeline inspection system to store your data in a data lake.  The data coming from various ultrasonic sensors is then stored in S3 where you can perform analytics on the data using Athena. Visual dashboards are generated using QuickSight. This solution helps reduce the need for manual inspection work, and drives maintenance scheduling efficiencies. Instances of pipeline failures are reduced with the instant notifications of pipeline thickness going below the configured threshold. Operations teams are able to respond quickly and prevent pipeline failure. Additionally, payload data from the sensors can be analyzed for business planning and predictive maintenance.

While we discussed oil and gas industry vertical as an example, this solution can be applied to any industry that uses IoT sensors to collect data. A number of customers in different industry verticals—smart devices, technology, industrial, automotive, oil and gas, security, and so on use AWS IoT Core in a number of ways. Visit our IoT use cases page for more information about how customers have achieved success with IoT on AWS.