Ransomware is a type of malware which encrypts data, effectively locking those affected by it out of their own data and requesting a payment to decrypt the data.  The frequency of ransomware attacks has increased over the past year, with local governments, hospitals, and private companies experiencing cases of ransomware.

For Sportradar, providing their customers with access to high quality sports data and insights is central to their business. Ensuring that their systems are designed securely and in a way which minimizes the possibility of a ransomware attack is top priority.  While ransomware attacks can occur both on premises and in the cloud, AWS services offer increased visibility and native encryption and back up capabilities. This helps prevent and minimize the likelihood and impact of a ransomware attack.

Recovery, backup, and the ability to go back to a known good state is best practice. To further expand their defense and diminish the value of ransom, the Sportradar architecture team set out to leverage their AWS Step Functions expertise to minimize recovery time. The team’s strategy centered on achieving a short deployment process. This process commoditized their production environment, allowing them to spin up interchangeable environments in new isolated AWS accounts, pulling in data from external and isolated sources, and diminishing the value of a production environment as a ransom target. This also minimized the impact of a potential data destruction event.

By partnering with AWS, Sportradar was able to build a secure and resilient infrastructure to provide timely recovery of their service in the event of data destruction by an unauthorized third party. Sportradar automated the deployment of their application to a new AWS account and established a new isolation boundary from an account with compromised resources. In this blog post, we show how the Sportradar architecture team used a combination of AWS CodePipeline and AWS Step Functions to automate and reduce their deployment time to less than two hours.

The prerequisites for implementing this deployment strategy are:

Once data destruction is identified, the first step in Sportradar’s process is to use a pre-created runbook to create a new AWS account.  A new account is created in case the malicious actors who have encrypted the application’s data have access to not just the application, but also to the AWS account the application resides in.

The runbook sets up a VPC for a selected Region, as well as spinning up the following resources:

It is a security best practice to ensure that no secrets are hard coded into your application code. So, after account setup is complete, the new AWS accounts Access Keys and the selected AWS Region are passed into CodePipeline variables. The application secrets are then deployed to the AWS Parameter Store.

Step 4: Step Function Orchestrates the Deployment of Microservices and Alarms

The AWS Step Functions orchestrate the deployment of Sportradar’s microservices solutions, deploying 10+ Amazon RDS instances, and restoring each dataset from DB snapshots. Following that, 80+ producer Amazon SQS queues and  S3 buckets for data staging were deployed. After the successful deployment of the SQS queues, the Lambda functions for data ingestion and 15+ data processing Step Functions are deployed to begin pulling in data from various sources into the solution.

Then the API Gateways and Lambda functions which provide the API layer for each of the microservices are deployed in front of the restored RDS instances. Finally, 300+ Amazon CloudWatch Alarms are created to monitor the environment and trigger necessary alerts. In total Sportradar’s deployment process brings online: 15+ Step Functions for data processing, 30+ micro-services, 10+ Amazon RDS instances with over 150GB of data, 80+ SQS Queues, 180+ Lambda functions, CDN for UI, Amazon Elasticache, and 300+ CloudWatch alarms to monitor the applications. In all, that is over 600 resources deployed with data restored consistently in less than 2 hours total. 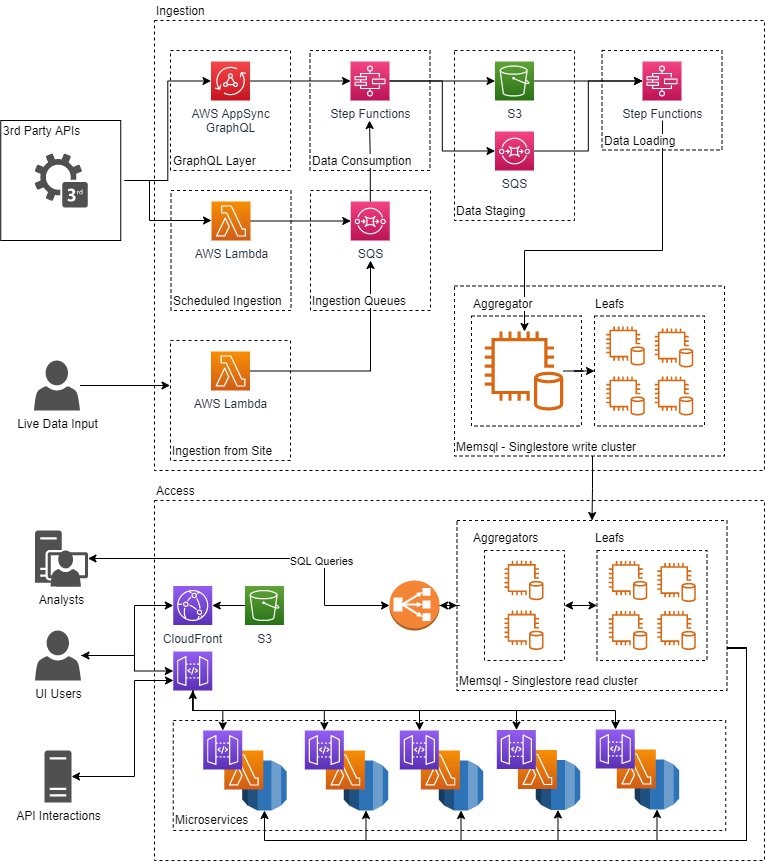 In this blog, we showed how Sportradar’s team used Step Functions to accelerate their deployments, and a walk-through of an example disaster recovery scenario. Step Functions can be used to orchestrate the deployment and configuration of a new environment, allowing complex environments to be deployed in stages, and for those stages to appropriately wait on their dependencies.