IPONWEB is a global leader that builds programmatic, real-time advertising technology and infrastructure for some of the world’s biggest digital media buyers and sellers. The core of IPONWEB’s business is Real-time Bidding (RTB). IPONWEB’s platform processes, transmits, and auctions huge volumes of bid requests and bid responses in real time. They are then able to determine the optimal ad impression to be displayed to an end user.

IPONWEB processes over 1 trillion impression auctions per month. The volumes of impressions require significant compute power to make calculations and complete the entire bidding auction within 200 milliseconds. IPONWEB’s flagship RTB products, BidSwitch and BSWX, have been running on Amazon EC2 reserved and On-Demand Instances. The nature of the workload for this volume of compute for this short a time, has been notably spiky. IPONWEB maintained a core workload running 24/7 on EC2 instances covered by Reserved Instances and Savings Plans.

To optimize costs further, IPONWEB decided to use Amazon EC2 Spot Instances. Although this decision is also advantageous for workload efficiency, adopting Spot Instances did introduce a few challenges that needed to be addressed.

Some challenges in using Spot Instances for this use case

The Real-time Bidding (RTB) workload is critical to the business. Any interruption of bid processing has a negative impact on revenue. While the spikiness issue needed to be addressed, it was imperative to find a solution that could be implemented in a smooth and seamless fashion.

Efficient distribution over Availability Zones (AZs) within the AWS Region being used was imperative. RTB auctions process trillions of requests and consume large volumes of network traffic. Consequently, IPONWEB is continuously optimizing traffic costs along with compute costs. The architectural approach is to put as much workload as possible in one AZ to reduce inter-AZ traffic. For better performance, IPONWEB’s main MongoDB database and Spot Instances are running in the same AZ.

This break point calculation led to the following best practices (in order of most value to least, for this use case):

The application workload running on the instances in these four Auto Scaling groups is evenly distributed. This is done using an Application Load Balancer (ALB), or IPONWEB’s purpose-built load balancer. 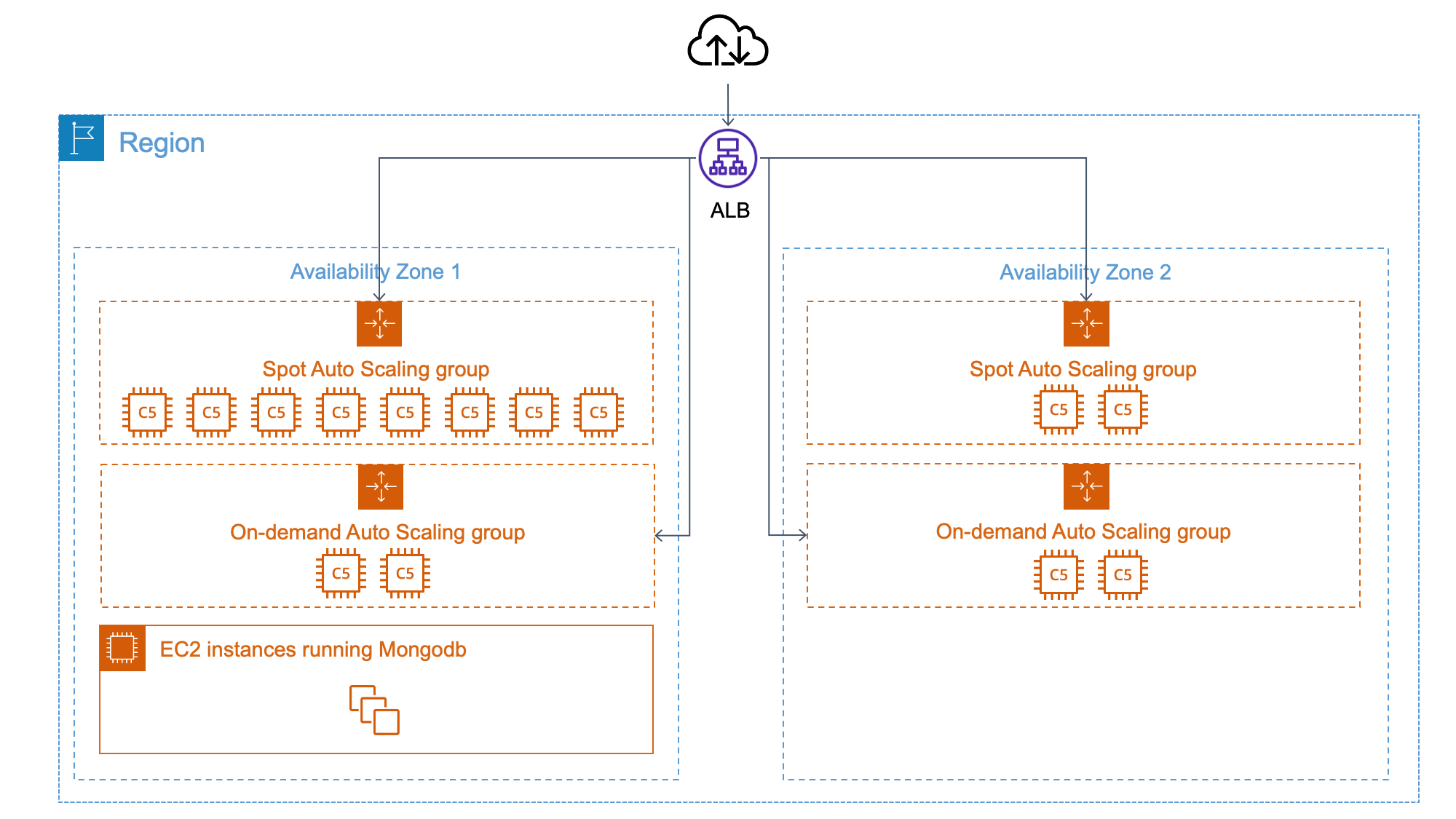 IPONWEB then needed to create a proper scaling policy for each Auto Scaling group. They decided to implement a self-monitoring mechanism in the application. This monitored how much compute resources (CPU and memory) are still available at any given time. Using this information, the application determines if it is able to take the next processing request. If it’s unable to, a log entry is created, and an “empty” response is returned. IPONWEB created a composite metric based on the drop rate and CPU utilization of each host.

Typically, the majority of this workload is done by the first group. The other groups are running with a bare minimum of two instances in each. After going live with this solution, IPONWEB observed that they can usually run the major portion of their workloads with the cheapest option. In this case, it was using Spot Instances in the same AZ as their database. There were several times when a large number of the Spot Instances were shut down. When this happened, the scaling diverted to On-Demand Instances. In general, the solution worked well and there was no degradation on the running services.

This solution helps IPONWEB utilize compute resources more efficiently using AWS, to place and process more bids. After the migration, IPONWEB increased infrastructure on AWS by ~15% without incurring additional costs. This solution can also be used for other workloads where you must have a granular control on the scaling while minimizing the costs.

“If you use cloud without optimizations, it is expensive. There are two ways to optimize the costs – use either Savings Plans or Spot Instances. But it feels like using Savings Plans is a step back to the traditional model where you buy hardware. On the other hand, using Spots is making you more Cloud native and is the way to move forward. I believe that in the future the majority of our workloads will be run on Spot.”