Connecting on-premises data centers to AWS using AWS Site-to-Site VPN to support distributed applications is a common practice. With business expansion and acquisitions, your company’s on-premises IT footprint may grow into various geographies, with these multiple sites comprising of on-premises data centers and co-location facilities. AWS Site-to-Site VPN supports throughput up to 1.25 Gbps, although the actual throughput can be lower for VPN connections that are in a different geolocations from the AWS region. This is because the internet path between them has to traverse multiple networks. For globally distributed applications that interact with other applications and components located on-premises, these VPN connections can impact performance and user experience.

This blog post provides an architectural approach to improving the performance of such globally distributed applications. We’ll explain an architecture that utilizes AWS Global Accelerator to create highly performant connectivity in terms of latency and bandwidth for VPN connections that originate from distant geographies around the world. Using this architecture, you can optimize your inter-application traffic between remote sites and your AWS environment, which can lead to better application performance and customer experience. 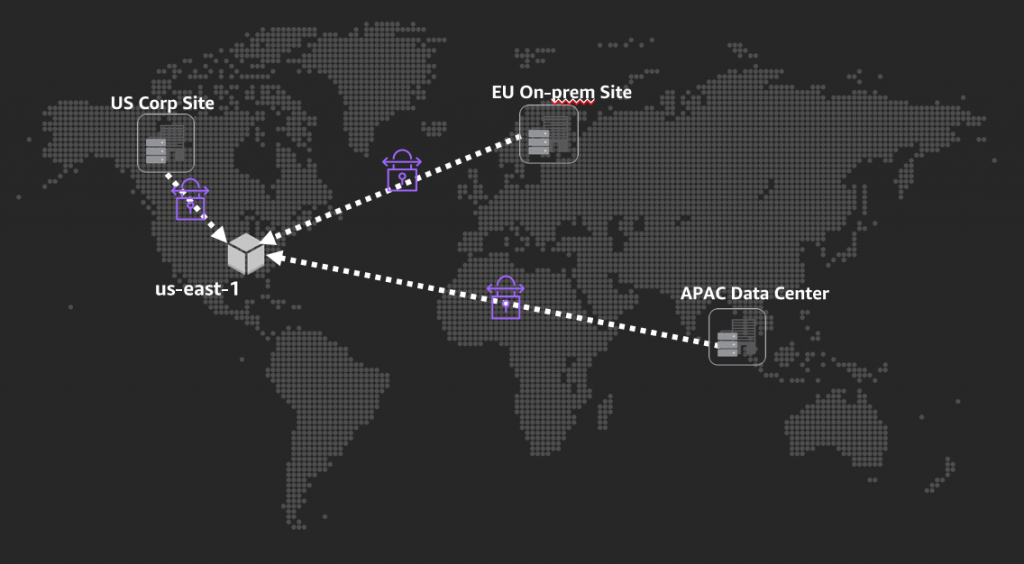 The above figure shows a pictorial representation of a customer’s existing IT footprint spread across several locations in the U.S., Europe, and the Asia Pacific (APAC), while the AWS environment is set up in us-east-1 region. In this use case, a business application hosted in AWS has the following dependencies on remote data centers and is also accessed by remote corporate users:

Site-to-Site VPN from a remote site to an AWS environment provides secure connectivity for this inter-application traffic, as well as traffic from users to the application. Sites closer to the us-east-1 region may see reasonably good network performance and latency. However, sites that are geographically remote may experience higher latencies and not-so-reliable network performance due to the number of network hops spanning multiple networks and possible congestion. In addition, varying network paths through the Internet backbone can also lead to increased latencies. This impacts the overall application performance, which can lead to an unsatisfactory customer experience. 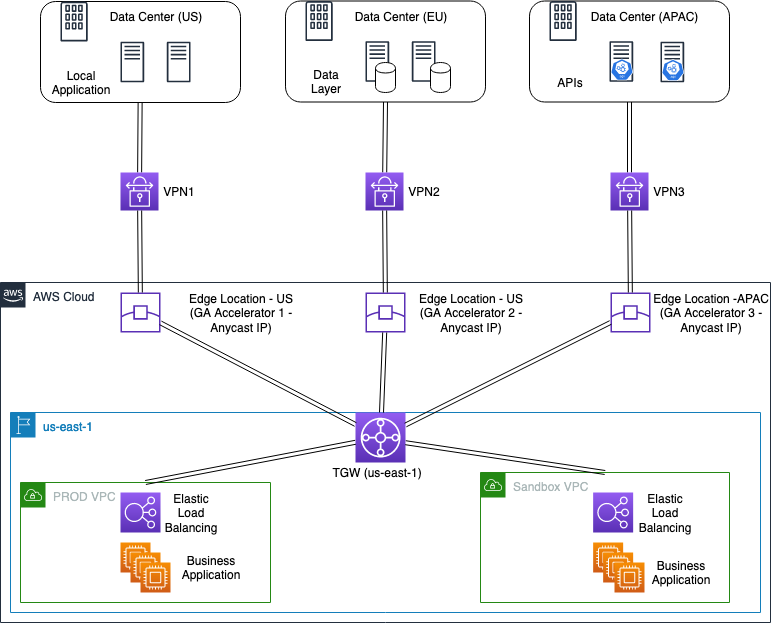 The above diagram shows the business application hosted in a multi-VPC architecture on AWS comprising of a production VPC and a sandbox VPC, typical of customer environments. These VPCs are interconnected using AWS Transit Gateway, and the VPN connections from the three remote sites terminate at AWS Transit Gateway as VPN attachments.

To improve the user experience for the application, VPN attachments to AWS Transit gateway are enabled with a feature called Accelerated Site-to-Site VPN. With this feature enabled, AWS Global Accelerator routes traffic from an on-premises network to the AWS Edge location closest to your customer’s gateway. It uses the AWS global network to route traffic through the AWS Global backbone from the closest Edge location, thereby ensuring the traffic remains over the optimum network path. This translates into faster response times, increased throughput, and a better user experience as described in this blog post about better performance for internet traffic with AWS Global Accelerator.

The Accelerated Site-to-Site VPN feature is enabled by creating accelerators that allow you to associate two Anycast static IPs from the Edge network. (Anycast is a network addressing and routing method that attributes a single IP address to multiple endpoints in a network.) These static IP addresses act as a fixed entry point to the VPN tunnel endpoints. This improves the availability and performance of your applications that need to interface with remote sites for their functionality. The above diagram shows three Edge locations, each one corresponding to the accelerators for each of the VPN connections. Since AWS Transit Gateway allows connectivity to multiple VPCs in your AWS environment, the benefit of improved network performance is extended to applications and workloads in VPCs connected to the transit gateway. This architecture scales as business demands and workloads continue to grow on AWS.

Configuring your VPN connections for the Acceleration

To make changes to your existing VPN, consider the following for enabling the acceleration:

Accelerated VPN functionality provides benefits to architectures involved in communicating with remote data centers and on-premises locations, but there are some considerations to keep in mind:

From the AWS Region where your application resides, you can use the Global Accelerator Speed Comparison tool from those remote data centers to see Global Accelerator download speeds compared to direct internet downloads. Note that while the tool uses TCP, the VPN uses UDP protocol, meaning it’s not a performance test of a VPN connection. However, it will give you a reasonable indication of the performance improvement for your VPN.

As you start adopting the cloud and migrating workloads to the AWS platform, you’ll realize the inherent benefits of scalability, high availability, and security to create fault-tolerant and production-grade applications. During this transition, you will have hybrid cloud environments utilizing VPN connectivity. Accelerated Site-to-Site VPN connections can provide you with performance improvements for your application traffic. This is a good alternative until your traffic demands and architecture considerations mandate the use of a dedicated network path using AWS Direct Connect from your remote locations to AWS.