A couple of months ago on the blog, I announced the AWS Chatbot Challenge in conjunction with Slack. The AWS Chatbot Challenge was an opportunity to build a unique chatbot that helped to solve a problem or that would add value for its prospective users. The mission was to build a conversational, natural language chatbot using Amazon Lex and leverage Lex’s integration with AWS Lambda to execute logic or data processing on the backend. 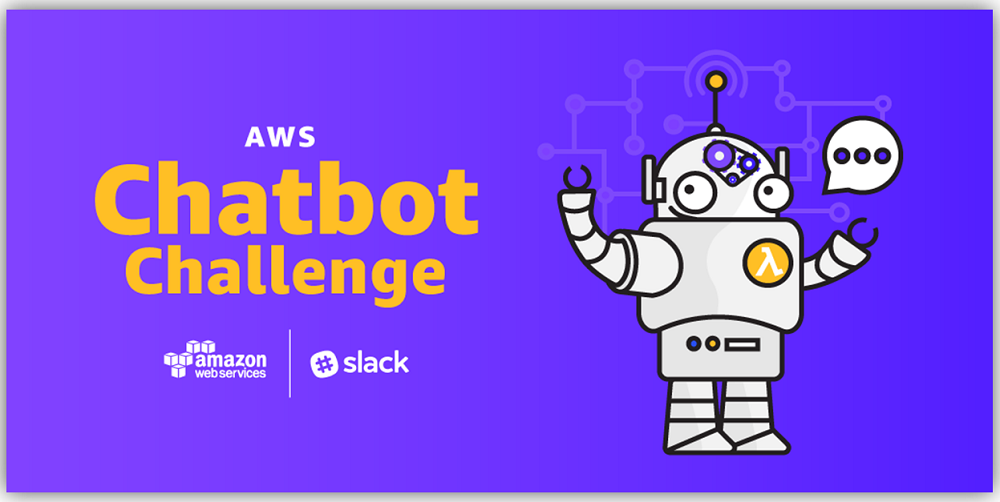 May I have the Envelope Please? (The Trumpets sound)

The winners of the AWS Chatbot Challenge are:

Diving into the Winning Chatbot Projects

Let’s take a walkthrough of the details for each of the winning projects to get a view of what made these chatbots distinctive, as well as, learn more about the technologies used to implement the chatbot solution.

The BuildFax Counts bot was created as a real solution for the BuildFax company to decrease the amount the time that sales and marketing teams can get answers on permits or properties with permits meet certain criteria. 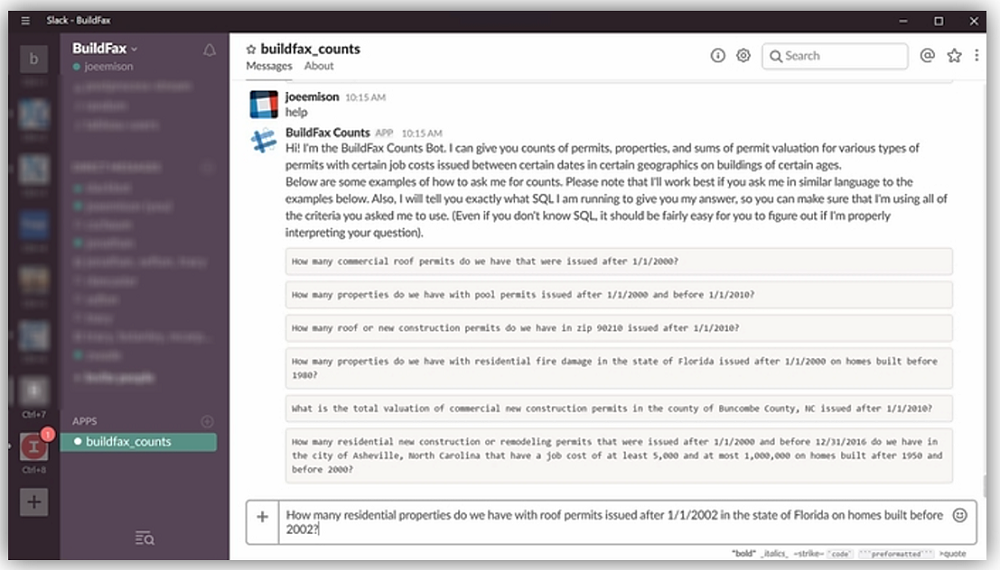 BuildFax, a company co-founded by bot developer Joe Emison, has the only national database of building permits, which updates data from approximately half of the United States on a monthly basis. In order to accommodate the many requests that come in from the sales and marketing team regarding permit information, BuildFax has a technical sales support team that fulfills these requests sent to a ticketing system by manually writing SQL queries that run across the shards of the BuildFax databases. Since there are a large number of requests received by the internal sales support team and due to the manual nature of setting up the queries, it may take several days for getting the sales and marketing teams to receive an answer.

The BuildFax Counts chatbot solves this problem by taking the permit inquiry that would normally be sent into a ticket from the sales and marketing team, as input from Slack to the chatbot. Once the inquiry is submitted into Slack, a query executes and the inquiry results are returned immediately.

Joe built this solution by first creating a nightly export of the data in their BuildFax MySQL RDS database to CSV files that are stored in Amazon S3. From the exported CSV files, an Amazon Athena table was created in order to run quick and efficient queries on the data. He then used Amazon Lex to create a bot to handle the common questions and criteria that may be asked by the sales and marketing teams when seeking data from the BuildFax database by modeling the language used from the BuildFax ticketing system. He added several different sample utterances and slot types; both custom and Lex provided, in order to correctly parse every question and criteria combination that could be received from an inquiry.  Using Lambda, Joe created a Javascript Lambda function that receives information from the Lex intent and used it to build a SQL statement that runs against the aforementioned Athena database using the AWS SDK for JavaScript in Node.js library to return inquiry count result and SQL statement used.

The BuildFax Counts bot is used today for the BuildFax sales and marketing team to get back data on inquiries immediately that previously took up to a week to receive results.

Not only is BuildFax Counts bot our 1st place winner and wonderful solution, but its creator, Joe Emison, is a great guy.  Joe has opted to donate his prize; the $5,000 cash, the $2,500 in AWS Credits, and one re:Invent ticket to the Black Girls Code organization. I must say, you rock Joe for helping these kids get access and exposure to technology.

In order to implement the Hubsy chatbot, Andrew and the team members used AWS Lambda to create a Lambda function with Node.js to parse the users request and call the HubSpot API, which will fulfill the initial request or return back to the user asking for more information. Terraform was used to automatically setup and update Lambda, CloudWatch logs, as well as, IAM profiles. Amazon Lex was used to build the conversational piece of the bot, which creates the utterances that a person on a sales team would likely say when seeking information from HubSpot. To integrate with Alexa, the Amazon Alexa skill builder was used to create an Alexa skill which was tested on an Echo Dot. Cloudwatch Logs are used to log the Lambda function information to CloudWatch in order to debug different parts of the Lex intents. In order to validate the code before the Terraform deployment, ESLint was additionally used to ensure the code was linted and proper development standards were followed.

PFMBot by Benny Leong and his team from MoneyLion 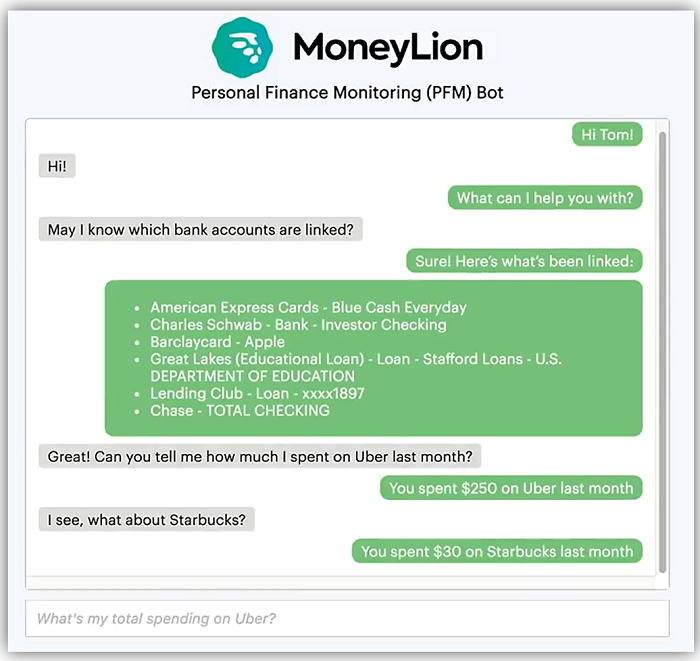 The PFMBot UI has a web interface built with using Javascript integration. The chatbot was created using Amazon Lex to build utterances based on the possible inquiries about the user’s MoneyLion bank account. PFMBot uses the Lex built-in AMAZON slots and parsed and converted the values from the built-in slots to pass to AWS Lambda. The AWS Lambda functions interacting with Amazon Lex are Java-based Lambda functions which call the MoneyLion Java-based internal APIs running on Spring Boot. These APIs obtain account data and related bank account information from the MoneyLion MySQL Database. 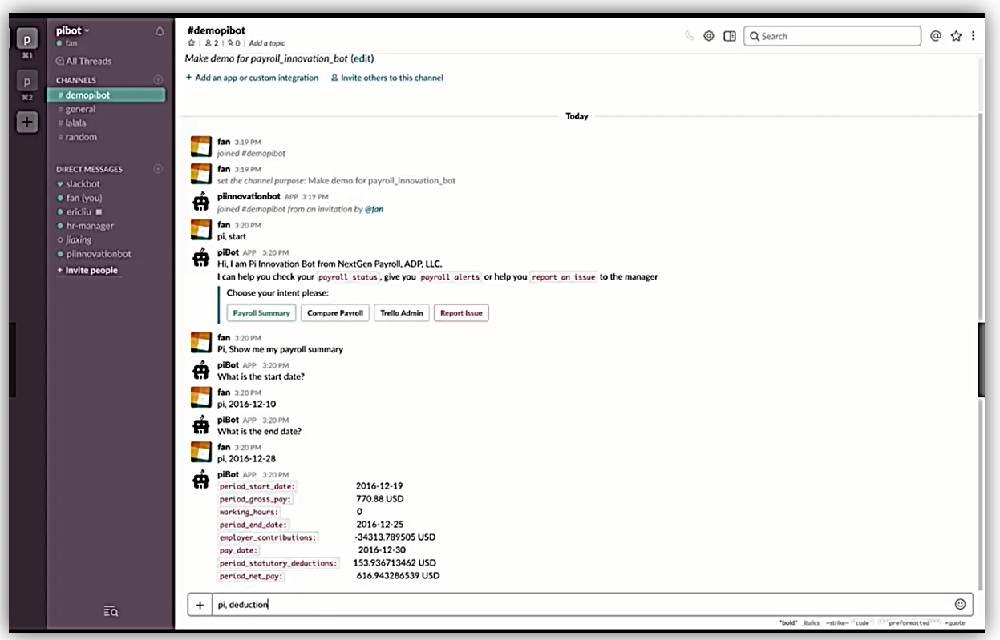 The architecture for the ADP PI DevOps bot is different architecture from the ADP PI bot shown above as it is deployed internally to ADP. The ADP PI DevOps bot allows input from both Slack and Alexa. When input comes into Slack, Slack sends the request to Lex for it to process the utterance. Lex then calls the Lambda backend, which obtains ADP data sitting in the ADP VPC running within an Amazon VPC. When input comes in from Alexa, a Lambda function is called that also obtains data from the ADP VPC running on AWS.

The architecture for the ADP PI bot consists of users entering in requests and/or entering issues via Slack. When requests/issues are entered via Slack, the Slack APIs communicate via Amazon API Gateway to AWS Lambda. The Lambda function either writes data into one of the Amazon DynamoDB databases for recording issues and/or sending issues or it sends the request to Lex. When sending issues, DynamoDB integrates with Trello to keep HR Managers abreast of the escalated issues. Once the request data is sent from Lambda to Lex, Lex processes the utterance and calls another Lambda function that integrates with the ADP API and it calls ADP data from within the ADP VPC, which runs on Amazon Virtual Private Cloud (VPC).

Python and Node.js were the chosen languages for the development of the bots.

The ADP PI bot ecosystem has the following functional groupings:

Let’s all wish all the winners of the AWS Chatbot Challenge hearty congratulations on their excellent projects.

You can review more details on the winning projects, as well as, all of the submissions to the AWS Chatbot Challenge at: https://awschatbot2017.devpost.com/submissions. If you are curious on the details of Chatbot challenge contest including resources, rules, prizes, and judges, you can review the original challenge website here:  https://awschatbot2017.devpost.com/.

Hopefully, you are just as inspired as I am to build your own chatbot using Lex and Lambda. For more information, take a look at the Amazon Lex developer guide or the AWS AI blog on Building Better Bots Using Amazon Lex (Part 1)

Chat with you soon!