Our customers run an incredible variety of mission-critical workloads on AWS, many of which process and store sensitive data. As detailed in our Overview of Security Processes document, AWS customers have access to an ever-growing set of options for encrypting and protecting this data. For example, Amazon Relational Database Service (RDS) supports encryption of data at rest and in transit, with options tailored for each supported database engine (MySQL, SQL Server, Oracle, MariaDB, PostgreSQL, and Aurora).

Many customers use AWS Key Management Service (AWS KMS) to centralize their key management, with others taking advantage of the hardware-based key management, encryption, and decryption provided by AWS CloudHSM to meet stringent security and compliance requirements for their most sensitive data and regulated workloads (you can read my post, AWS CloudHSM – Secure Key Storage and Cryptographic Operations, to learn more about Hardware Security Modules, also known as HSMs).

Major CloudHSM Update
Today, building on what we have learned from our first-generation product, we are making a major update to CloudHSM, with a set of improvements designed to make the benefits of hardware-based key management available to a much wider audience while reducing the need for specialized operating expertise. Here’s a summary of the improvements:

Pay As You Go – CloudHSM is now offered under a pay-as-you-go model that is simpler and more cost-effective, with no up-front fees.

Fully Managed – CloudHSM is now a scalable managed service; provisioning, patching, high availability, and backups are all built-in and taken care of for you. Scheduled backups extract an encrypted image of your HSM from the hardware (using keys that only the HSM hardware itself knows) that can be restored only to identical HSM hardware owned by AWS. For durability, those backups are stored in Amazon Simple Storage Service (Amazon S3), and for an additional layer of security, encrypted again with server-side S3 encryption using an AWS KMS master key.

Open & Compatible  – CloudHSM is open and standards-compliant, with support for multiple APIs, programming languages, and cryptography extensions such as PKCS #11 and Java Cryptography Extension (JCE). The open nature of CloudHSM gives you more control and simplifies the process of moving keys (in encrypted form) from one CloudHSM to another, and also allows migration to and from other commercially available HSMs.

More Secure – CloudHSM Classic (the original model) supports the generation and use of keys that comply with FIPS 140-2 Level 2. We’re stepping that up a notch today with support for FIPS 140-2 Level 3, with security mechanisms that are designed to detect and respond to physical attempts to access or modify the HSM. Your keys are protected with exclusive, single-tenant access to tamper-resistant HSMs that appear within your Virtual Private Clouds (VPCs). CloudHSM supports quorum authentication for critical administrative and key management functions. This feature allows you to define a list of N possible identities that can access the functions, and then require at least M of them to authorize the action. It also supports multi-factor authentication using tokens that you provide.

AWS-Native – The updated CloudHSM is an integral part of AWS and plays well with other tools and services. You can create and manage a cluster of HSMs using the AWS Management Console, AWS Command Line Interface (CLI), or API calls.

Diving In
You can create CloudHSM clusters that contain 1 to 32 HSMs, each in a separate Availability Zone in a particular AWS Region. Spreading HSMs across AZs gives you high availability (including built-in load balancing); adding more HSMs gives you additional throughput. The HSMs within a cluster are kept in sync: performing a task or operation on one HSM in a cluster automatically updates the others. Each HSM in a cluster has its own Elastic Network Interface (ENI).

All interaction with an HSM takes place via the AWS CloudHSM client. It runs on an EC2 instance and uses certificate-based mutual authentication to create secure (TLS) connections to the HSMs.

At the hardware level, each HSM includes hardware-enforced isolation of crypto operations and key storage. Each customer HSM runs on dedicated processor cores.

Setting Up a Cluster
Let’s set up a cluster using the CloudHSM Console:

I click on Create cluster to get started, select my desired VPC and the subnets within it (I can also create a new VPC and/or subnets if needed): 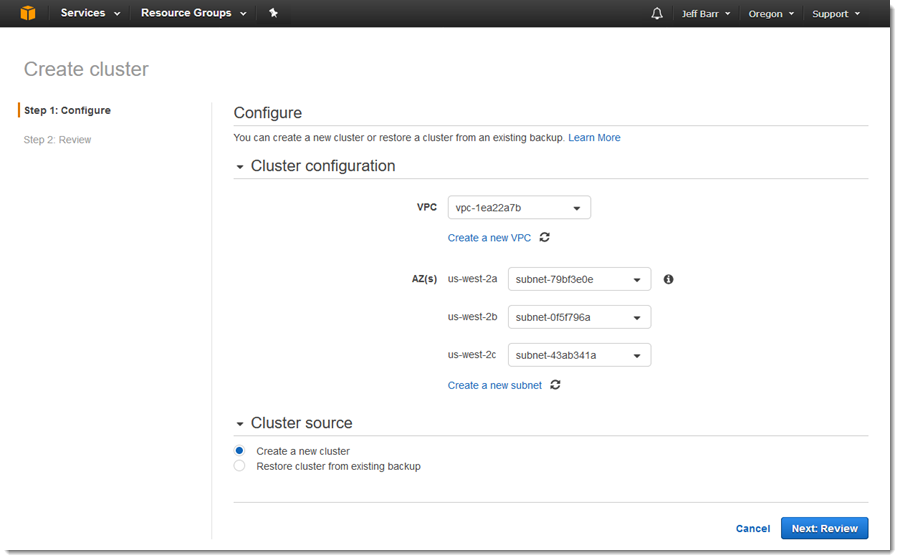 Then I review my settings and click on Create:

After a few minutes, my cluster exists, but is uninitialized:

And then creating a private key and using it to sign the request (these commands were copied from the Initialize Cluster docs and I have omitted the output. Note that ID identifies the cluster):

The next step is to apply the signed certificate to the cluster using the console or the CLI. After this has been done, the cluster can be activated by changing the password for the HSM’s administrative user, otherwise known as the Crypto Officer (CO).

Once the cluster has been created, initialized and activated, it can be used to protect data. Applications can use the APIs in AWS CloudHSM SDKs to manage keys, encrypt & decrypt objects, and more. The SDKs provide access to the CloudHSM client (running on the same instance as the application). The client, in turn, connects to the cluster across an encrypted connection.

Available Today
The new HSM is available today in the US East (N. Virginia), US West (Oregon), US East (Ohio), and Europe (Ireland) Regions, with more in the works. Pricing starts at $1.45 per HSM per hour.