We launched EC2 Run Command late last year and have enjoyed seeing our customers put it to use in their cloud and on-premises environments. After the launch, we quickly added Support for Linux Instances, the power to Manage & Share Commands, and the ability to do Hybrid & Cross-Cloud Management. Earlier today we made EC2 Run Command available in the China (Beijing) and Asia Pacific (Seoul) Regions.

Our customers are using EC2 Run Command to automate and encapsulate routine system administration tasks. They are creating local users and groups, scanning for and then installing applicable Windows updates, managing services, checking log files, and the like. Because these customers are using EC2 Run Command as a building block, they have told us that they would like to have better visibility into the actual command execution process. They would like to know, quickly and often in detail, when each command and each code block in the command begins executing, when it completes, and how it completed (successfully or unsuccessfully).

In order to support this really important use case, you can now arrange to be notified when the status of a command or a code block within a command changes. In order to provide you with several different integration options, you can receive notifications via CloudWatch Events or via Amazon Simple Notification Service (SNS).

These notifications will allow you to use EC2 Run Command in true building block fashion. You can programmatically invoke commands and then process the results as they arrive. For example, you could create and run a command that captures the contents of important system files and metrics on each instance. When the command is run, EC2 Run Command will save the output in S3. Your notification handler can retrieve the object from S3, scan it for items of interest or concern, and then raise an alert if something appears to be amiss.

Monitoring Executing Using Amazon SNS
Let’s run up a command on some EC2 instances and monitor the progress using SNS.

Following the directions (Monitoring Commands), I created an S3 bucket (jbarr-run-output), an SNS topic (command-status), and an IAM role (RunCommandNotifySNS) that allows the on-instance agent to send notifications on my behalf. I also subscribed my email address to the SNS topic, and entered the command:

And specified the bucket, topic, and role (further down on the Run a command page): 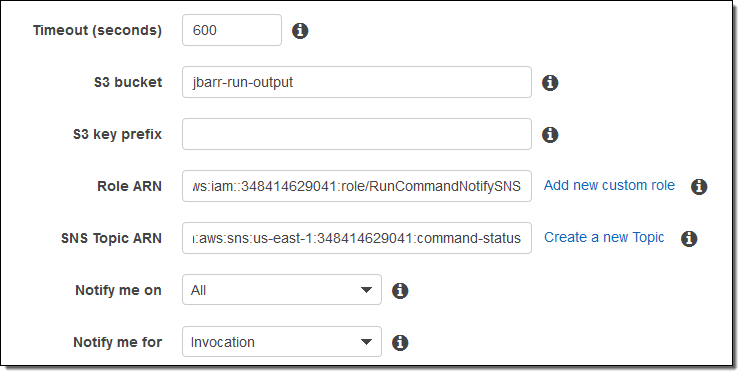 I clicked on Run and received a sequence of emails as the commands were executed on each of the instances that I selected. Here’s a sample: 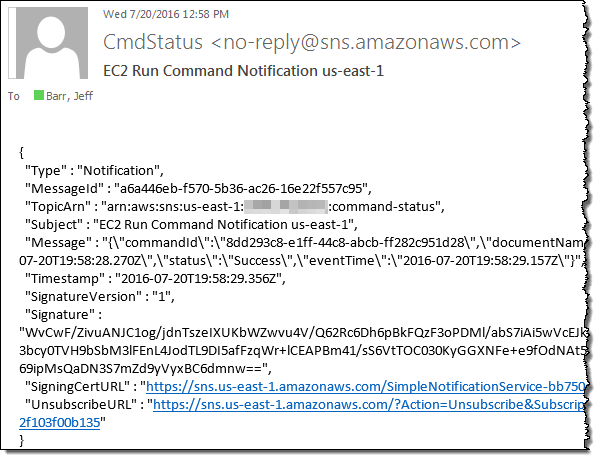 In a real-world environment you would receive and process these notifications programmatically.

For illustrative purposes, I used a very simple Lambda function:

I created a rule that would invoke the function for all notifications issued by the Run Command (as you can see below, I could have been more specific if necessary): 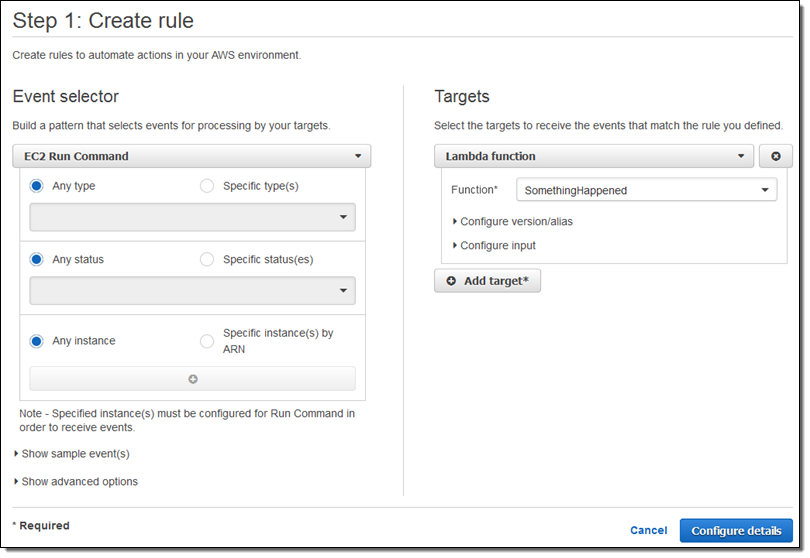 I saved the rule and ran another command, and then checked the CloudWatch metrics a few seconds later:

I also checked the CloudWatch log and inspected the output from my code: 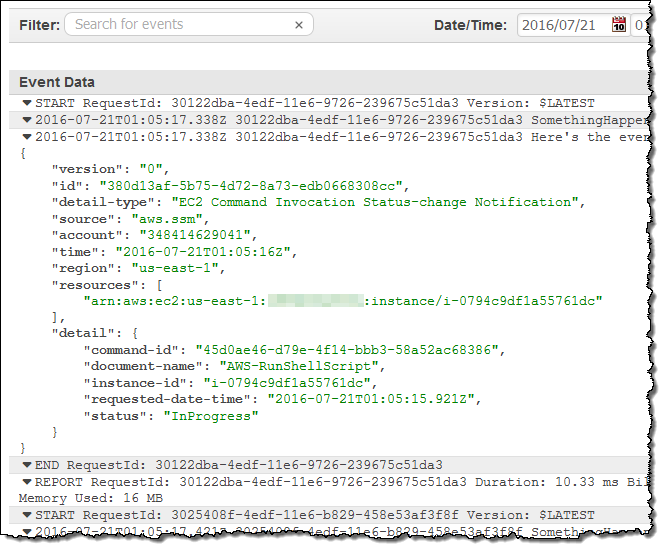