When you pull the curtain back on an AWS-powered application, you’ll find that a lot is happening behind the scenes. EC2 instances are launched and terminated by Auto Scaling policies in response to changes in system load, Amazon DynamoDB tables, Amazon SNS topics and Amazon SQS queues are created and deleted, and attributes of existing resources are changed from the AWS Management Console, the AWS APIs, or the AWS Command Line Interface (CLI).

Many of our customers build their own high-level tools to track, monitor, and control the overall state of their AWS environments. Up until now, these tools have worked in a polling fashion. In other words, they periodically call AWS functions such as DescribeInstances, DescribeVolumes, and ListQueues to list the AWS resources of various types (EC2 instances, EBS volumes, and SQS queues here) and to track their state. Once they have these lists, they need to call other APIs to get additional state information for each resources, compare it against historical data to detect changes, and then take action as they see fit. As their systems grow larger and more complex, all of this polling and state tracking can become onerous.

CloudWatch Events delivers a near real-time stream of system events that describe changes in AWS resources. Using simple rules that you can set up in a couple of minutes, you can easily route each type of event to one or more targets: AWS Lambda functions, Amazon Kinesis streams, Amazon SNS topics, and built-in targets.

You can think of CloudWatch Events as the central nervous system for your AWS environment. It is wired in to every nook and cranny of the supported services, and becomes aware of operational changes as they happen. Then, driven by your rules,  it activates functions and sends messages (activating muscles, if you will) to respond to the environment, making changes, capturing state information, or taking corrective action.

We are launching CloudWatch Events with an initial set of AWS services and events today, and plan to support many more over the next year or so.

Diving in to CloudWatch Events
The three main components that you need to know about are events, rules, and targets.

Events (represented as small blobs of JSON) are generated in four ways. First, they arise from within AWS when resources change state. For example, an event is generated when the state of an EC2 instance changes from pending to running or when Auto Scaling launches an instance. Second, events are generated by API calls and console sign-ins that are delivered to Amazon CloudWatch Events via CloudTrail. Third, your own code can generate application-level events and publish them to Amazon CloudWatch Events for processing. Fourth, they can be issued on a scheduled basis, with options for periodic or Cron-style scheduling.

Rules match incoming events and route them to one or more targets for processing. Rules are not processed in any particular order; all of the rules that match an event will be processed (this allows disparate parts of a single organization to independently look for and process events that are of interest).

Targets process events and are specified within rules. There are four initial target types: built-in, Lambda functions, Kinesis streams, and SNS topics, with more types on the drawing board. A single rule can specify multiple targets. Each event is passed to each target in JSON form. Each rule has the opportunity to customize the JSON that flows to the target. They can elect to pass the event as-is, pass only certain keys (and the associated values) to the target, or to pass a constant (literal) string.

CloudWatch Events in Action
Let’s go ahead and set up a rule or two! I’ll use a simple Lambda function called SomethingHappened. It will simply log the contents of the event: 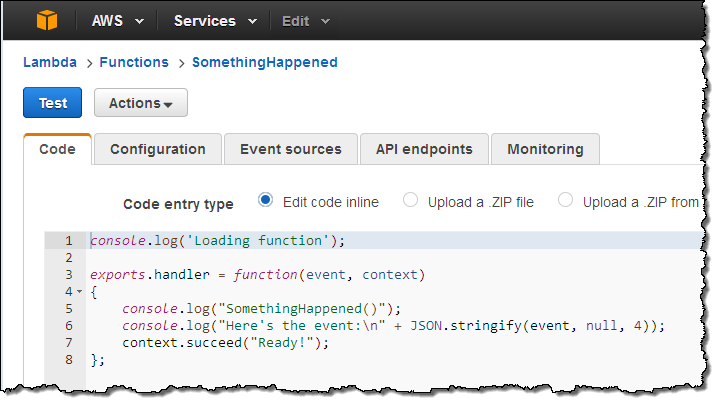 Next, I switch to the new CloudWatch Events Console, click on Create rule and choose an event source (here’s the menu with all of the choices): 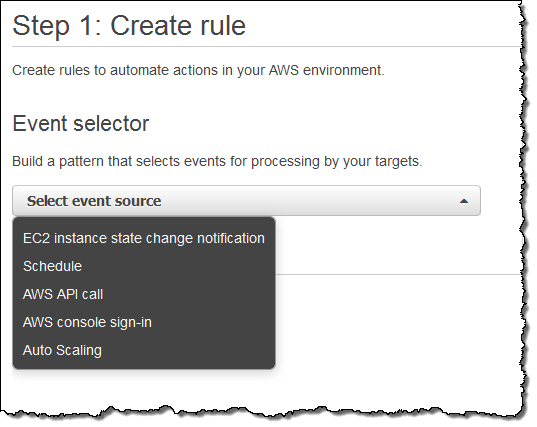 Just a quick note before going forward. Some of the AWS services fire events directly. Others are fired based on the events logged to CloudTrail; you’ll need to enable CloudTrail for the desired service(s) in order to receive them.

I want to keep tabs on my EC2 instances, so I choose EC2 from the menu. I can choose to create a rule that fires on any state transition, or on a transition to one or more states that are of interest: 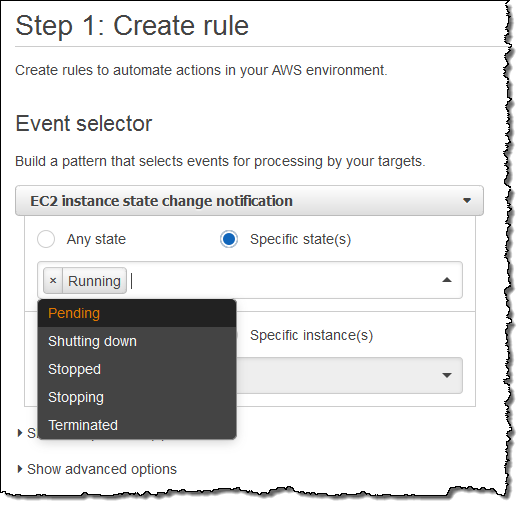 I want to know about newly launched instances, so I’ll choose Running. I can make the rule respond to any of my instances in the region, or to specific instances. I’ll go with the first option; here’s my pattern: 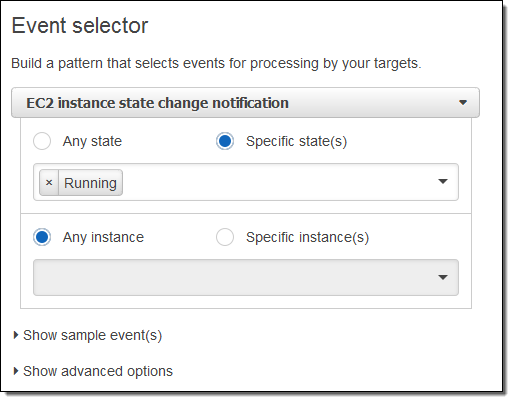 Now I need to make something happen. I do this by picking a target. Again, here are my choices: 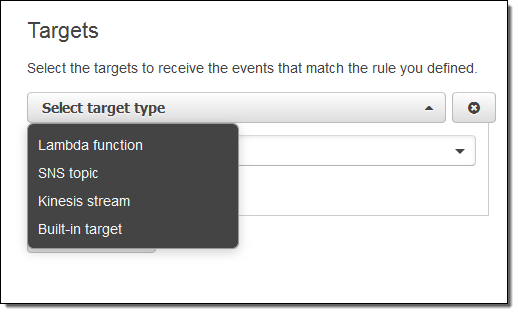 I simply choose Lambda and pick my function: 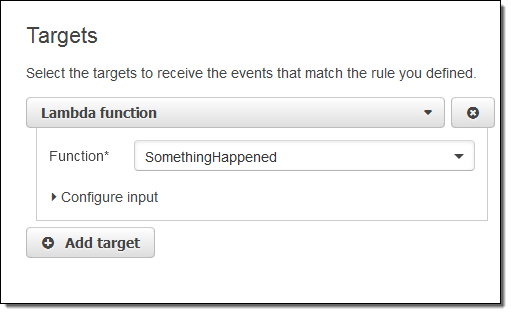 I’m almost there! I just need to name and describe my rule, and then click on Create rule:

I click on Create Rule and the rule is all set to go:

Now I can test it by launching an EC2 instance. In fact, I’ll launch 5 of them just to exercise my code! After waiting a minute or so for the instances to launch and to initialize, I can check my Lambda metrics to verify that my function was invoked: 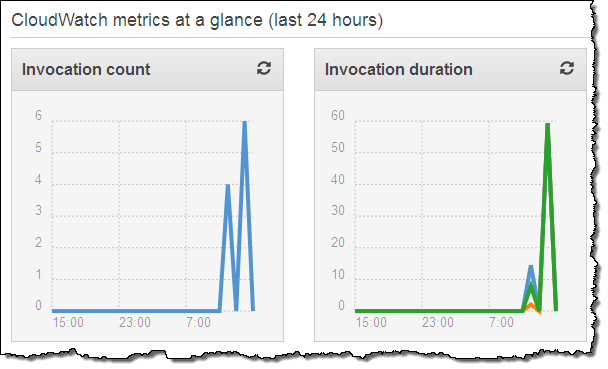 This looks good (the earlier invocations were for testing). Then I can visit the CloudWatch logs to view the output from my function:

Clearly, a “real” function would do something a lot more interesting. It could add some mandatory tags to the instance, update a dynamic visualization, or send me a text message via SNS. If you want to do any (or all of these things), you would need to have a more permissive IAM role for the function, of course. I could make the rule more general (or create another one) if  I wanted to capture some of the other state transitions.

Scheduled Execution of Rules
I can also set up a rule that fires periodically or according to a pattern described in a Cron expression. Here’s how I would do that: 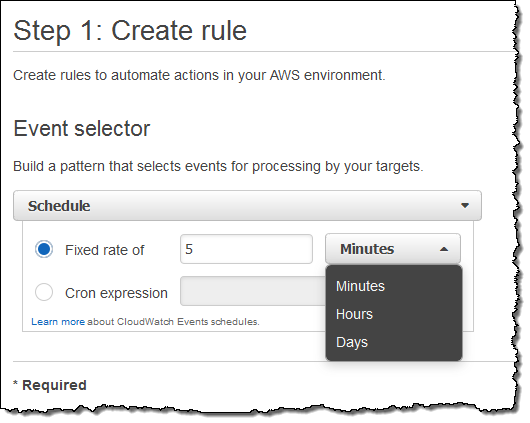 You might find it interesting to know that this is the underlying mechanism used to set up scheduled Lambda jobs, as announced at AWS re:Invent.

Metrics for Events
CloudWatch Events reports a number of metrics to CloudWatch, all within the AWS/Events namespace. You can use these metrics to verify that your rules are firing as expected, and to track the overall activity level of your rule collection. 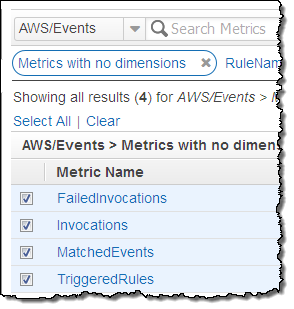 The following metrics are reported for the service as a whole:

The following metrics are reported for each rule:

In the Works
Like many emerging AWS services, we are launching CloudWatch Events with an initial set of features (and a lot of infrastructure behind the scenes) and some really big plans, including AWS CloudFormation support. We’ll adjust our plans based on your feedback, but you can expect coverage of many more AWS services and access to additional targets over time. I’ll do my best to keep you informed.

Getting Started
We are launching CloudWatch Events in the US East (N. Virginia), US West (Oregon), Europe (Ireland), and Asia Pacific (Tokyo) regions. It is available now and you can start using it today!