Amazon Managed Workflows for Apache Airflow (Amazon MWAA) is a fully managed service that makes it easy to run open-source versions of Apache Airflow on AWS and build workflows to run your extract, transform, and load (ETL) jobs and data pipelines.

You can use AWS Step Functions as a serverless function orchestrator to build scalable big data pipelines using services such as Amazon EMR to run Apache Spark and other open-source applications on AWS in a cost-effective manner, and use AWS Glue for a serverless environment to prepare (extract and transform) and load large amounts of datasets from a variety of sources for analytics and data processing with Apache Spark ETL jobs

For production pipelines, a common use case is to read data originating from a variety of sources. This data requires transformation to extract business value and generate insights before sending to downstream applications, such as machine learning algorithms, analytics dashboards, and business reports.

This post demonstrates how to use Amazon MWAA as a primary workflow management service to create and run complex workflows and extend the directed acyclic graph (DAG) to start and monitor a state machine created using Step Functions. In Airflow, a DAG is a collection of all the tasks you want to run, organized in a way that reflects their relationships and dependencies.

The following diagram illustrates the architectural overview of the components involved in the orchestration of the workflow. This workflow uses Amazon EMR to preprocess data and starts a Step Functions state machine. The state machine transforms data using AWS Glue. 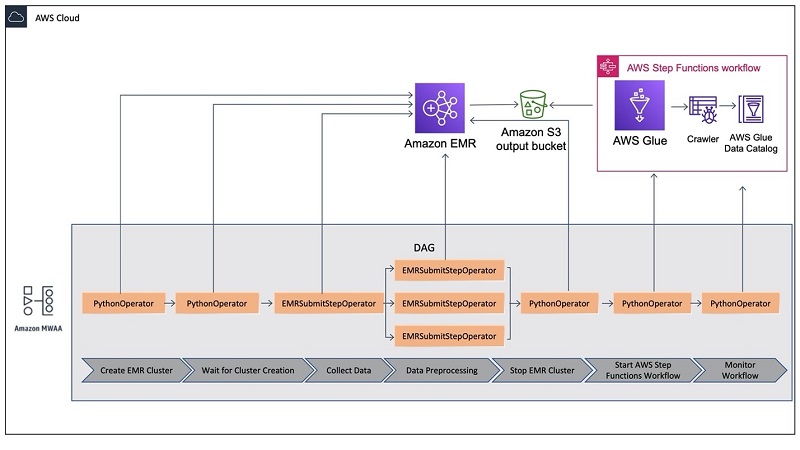 You can build complex ETL pipelines with Step Functions separately and trigger them from an Airflow DAG.

Take a note of the Amazon Simple Storage Service (Amazon S3) bucket that stores the DAGs. It’s located on the environment details page on the Amazon MWAA console.

Also note the AWS Identity and Access Management (IAM) execution role. This role should be modified to allow MWAA to read and write from your S3 bucket, submit an Amazon EMR step, start a Step Functions state machine, and read from the AWS Systems Manager Parameter Store. The IAM role is available in the Permissions section of the environment details.

For this post, we use the MovieLens dataset. We concurrently convert the MovieLens CSV files to Parquet format and save them to Amazon S3 as part of preprocessing.

Our solution extends the ETL pipeline to run a Step Functions state machine from the Airflow DAG. Step Functions lets you build visual workflows that enable fast translation of business requirements into technical requirements. With Step Functions, you can set up dependency management and failure handling using a JSON-based template. A workflow is a series of steps, such as tasks, choices, parallel runs, and timeouts with the output of one step acting as input into the next. For more information about other use cases, see AWS Step Functions Use Cases.

The following diagram shows the ETL process set up through a Step Functions state machine.

In the workflow, the Process Data step runs an AWS Glue job, and the Get Job Status step periodically checks for the job completion. The AWS Glue job reads the input datasets and creates output data for the most popular movies and top-rated movies. After the job is complete, the Run Glue Crawler step runs an AWS Glue crawler to catalog the data. The workflow also allows you to monitor and respond to failures at any stage.

Create your resources by following the installation instructions provided in the amazon-mwaa-complex-workflow-using-step-functions README.md.

To run your ETL workflow, complete the following steps:

This displays the overall ETL pipeline managed by Airflow. 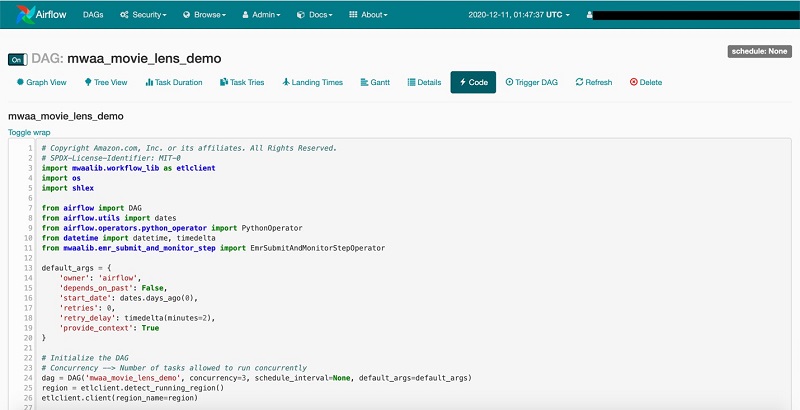 The code for the custom operator can be found in the amazon-mwaa-complex-workflow-using-step-functions GitHub repo. 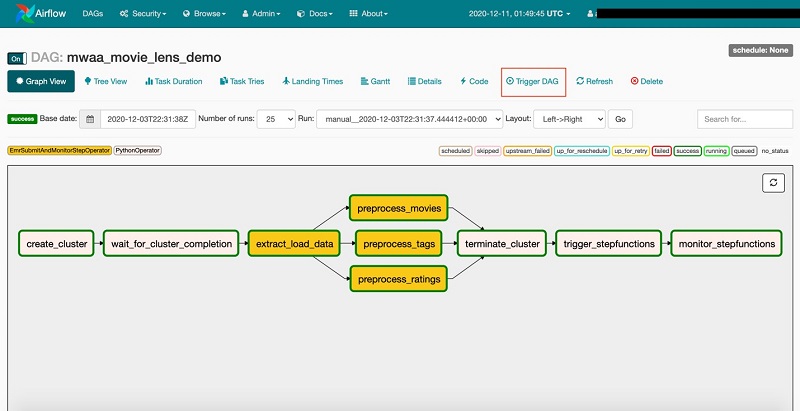 When the Airflow DAG runs, the first task calls the PythonOperator to create an EMR cluster using Boto3. Boto is the AWS SDK for Python. It enables Python developers to create, configure, and manage AWS services, such as Amazon Elastic Compute Cloud (Amazon EC2) and Amazon S3. Boto provides object-oriented API, as well as low-level access to AWS services.

The second task waits until the EMR cluster is ready and in the Waiting state. As soon as the cluster is ready, the data load task runs, followed by the data preprocessing tasks, which are started in parallel using EmrSubmitAndMonitorStepOperator. Concurrency in the current Airflow DAG is set to 3, which runs three tasks in parallel. You can change the concurrency of Amazon EMR to run multiple Amazon EMR steps in parallel.

When the data preprocessing tasks are complete, the EMR cluster is stopped and the DAG starts the Step Functions state machine to initiate data transformation.

The final task in the DAG monitors the completion of the Step Functions state machine.

The DAG run should complete in approximately 10 minutes.

While the DAG is running, you can view the task logs. 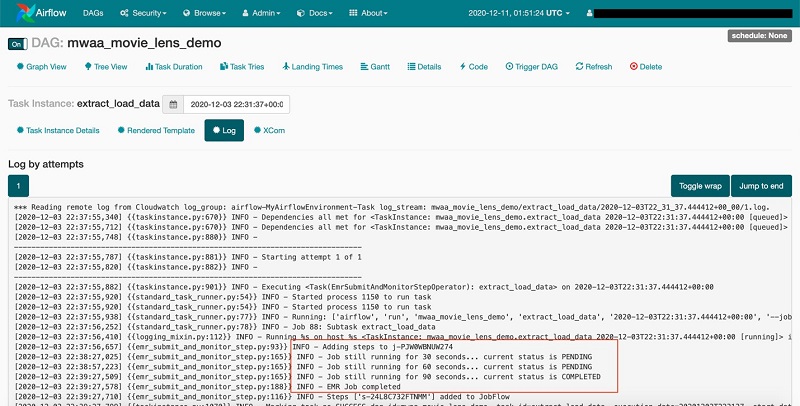 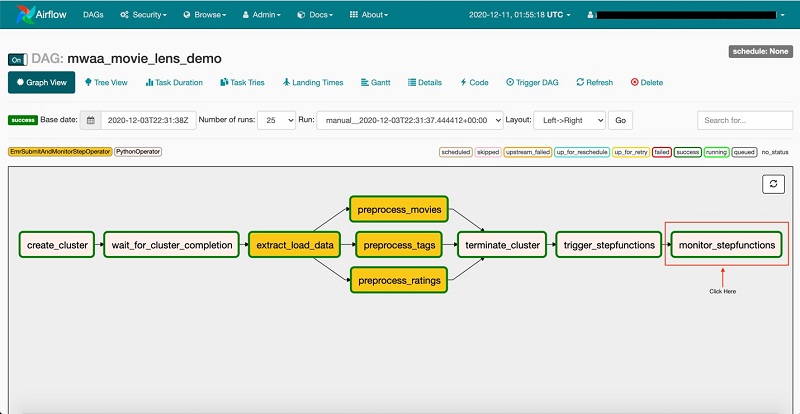 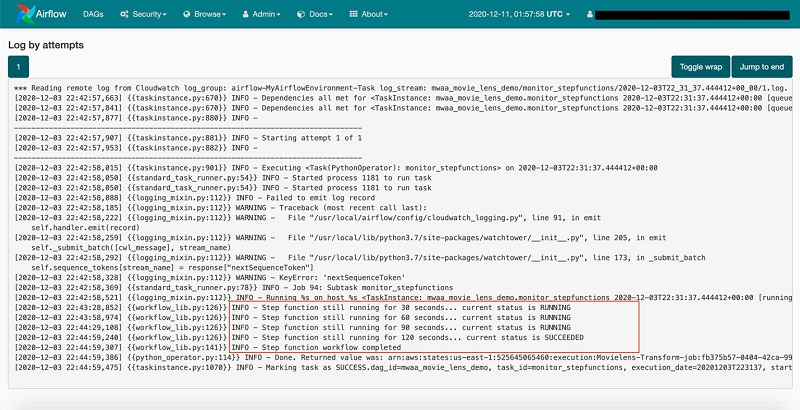 After the successful completion of the Airflow DAG, two tables are created in the AWS Glue Data Catalog. To query the data with Amazon Athena, complete the following steps:

You should see the two tables. If the tables aren’t listed, verify that the AWS Glue crawler run is complete and that the console is showing the correct Region.

The following screenshot shows the output.

To clean up the resources created as part of our CloudFormation template, delete the mwaa-demo-foundations stack. You can either use the AWS CloudFormation console or the AWS Command Line Interface (AWS CLI).

In this post, we used Amazon MWAA to orchestrate an ETL pipeline on Amazon EMR and AWS Glue with Step Functions. We created an Airflow DAG to demonstrate how to run data processing jobs concurrently and extended the DAG to start a Step Functions state machine to build a complex ETL pipeline. A custom Airflow operator submitted and then monitored the Amazon EMR steps synchronously.

If you have comments or feedback, please leave them in the comments section.

Dipankar Ghosal is a Sr Data Architect at Amazon Web Services and is based out of Minneapolis, MN. He has a focus in analytics and enjoys helping customers solve their unique use cases. When he’s not working, he loves going hiking with his wife and daughter.