Tony Gibbs is a Solutions Architect with AWS

(Update: This blog post has been translated into Japanese)

When it comes to choosing a SQL-based database in AWS, there are many options. Sometimes it can be difficult to know which one to choose. For example, when would you use Amazon Aurora instead of Amazon RDS PostgreSQL or Amazon Redshift? To answer this question, you must first understand the nature of the data workload and then evaluate other factors such as the quantity of data and query access patterns.

The design and capabilities of the different AWS services mean that each service has different strengths and excels at different workloads. This leads to trying to pick the right tool for the job, which can result in tradeoffs. But sometimes you don’t want to compromise.

This post explains how to use two services together—Amazon Redshift and Amazon RDS PostgreSQL—to avoid tradeoffs when choosing between a columnar data store and a row-based data store.

Amazon Redshift uses a columnar architecture, which means the data is organized by columns on disk instead of row-by-row as in the OLTP approach. Columnar architecture offers advantages when querying a subset of the columns in a table by greatly reducing I/O. And because the data is stored by column, it can be highly compressed which further reduces I/O and allows more data to be stored and quickly queried.

RDS PostgreSQL uses a row-based architecture, which offers advantages when the workload is selecting, inserting, updating or deleting a small number of rows at a time, which is typical for OLTP.

Amazon Redshift also uses a massively parallel processing (MPP), shared-nothing architecture. This means that Amazon Redshift is designed to use all of the computing resources across many machines (called nodes) even when executing a single query. This provides excellent performance for analytical queries across a large number of rows. In contrast, most OLTP databases only use a subset of resources on one machine to process each query. This difference in architecture means that most OLTP databases can handle more concurrent queries because each query is typically less resource-intensive than those in Amazon Redshift.

Linking the high-performance power of Amazon Redshift with the feature-richness of RDS PostgreSQL is an attractive proposition because the two systems complement each other so well. How is it possible to link these two systems? An RDS PostgreSQL database is not an MPP database, but it does have features that enable multiple instances to be linked to one another.

The diagram above shows how the connections flow between the end users and the databases. Optionally, you can connect directly to Amazon Redshift if needed. If that is the case, consider configuring pgbouncer-rr on an Amazon EC2 instance to simplify management of the two connections. The diagram below illustrates this solution:

RDS PostgreSQL includes two extensions to execute queries remotely. The first extension is the PostgreSQL foreign-data wrapper, postgres_fdw. The postgres_fdw module enables the creation of external tables. External tables can be queried in the same way as a local native table, However, the query is not currently executed entirely on the remote side because postgres_fdw doesn’t push down aggregate functions and limit clauses. When you perform an aggregate query through an external table, all the data is pulled into PostgreSQL for an aggregation step. This is unacceptably slow for any meaningful number of rows.

The second extension is dblink, which includes a function also called dblink. The dblink function allows the entire query to be pushed to Amazon Redshift. This lets Amazon Redshift do what it does best—query large quantities of data efficiently and return the results to PostgreSQL for further processing.

To set up this solution:

For more information, see dblink in the PostgreSQL documentation.

The dblink function requires you to pass in the SQL statement as a string and define the result set, as shown in the following query:

The partial result set from this query is:

After the results from the query are returned, PostgreSQL can do further processing such as transforming the results to JSON, as in the following example:

To make the SQL less cumbersome to use, these queries can also be expressed as views. Below is a view of the first basic query:

Querying the view returns the same results as before:

Another approach is to query the data using user-defined functions (UDF). In contrast to views, UDFs enable you to specify parameters when you run the UDF.  In the previous example, the date range was hard-coded in the view. With a UDF, you can query on an arbitrary datetime range. The following PL/pgSQL code creates the UDF in PostgreSQL:

In PostgreSQL, the function can be executed in a query:

Materialized views hold a cache of data that can become stale. The following SQL statement refreshes the data and re-issues the original query that created the materialized view:

For more information, see Materialized Views in the PostgreSQL documentation.

Lambda requires the pg module, which can be installed using the following command:

When there is a larger quantity of data, it might be better to copy the data using the dblink function into PostgreSQL tables instead of using materialized views. This is useful where there are large quantities of new data and only the latest data needs to be copied. The disadvantage of the materialized view is that refreshes copy all of the data from the beginning.

The SQL to create the table:

PostgreSQL uses indexes to optimize reads and the new BRIN is an appropriate index for ordered timestamps. The SQL to create the index is:

The following query shows how to insert data into the tables using the dblink function:

You can use the dblink extension to connect to Amazon Redshift and leverage PostgreSQL functionality. This allows you to cache frequently queried small data sets, with two choices: materialized views with refreshes, or copying data into tables. For querying non-cached data, there are also two choices: regular views or UDFs that take parameters. There are likely many other uses for the dblink extension with Amazon Redshift, such as PostGIS or LDAP support in PostgreSQL (Amazon EC2 only), but they are beyond the scope of this post. 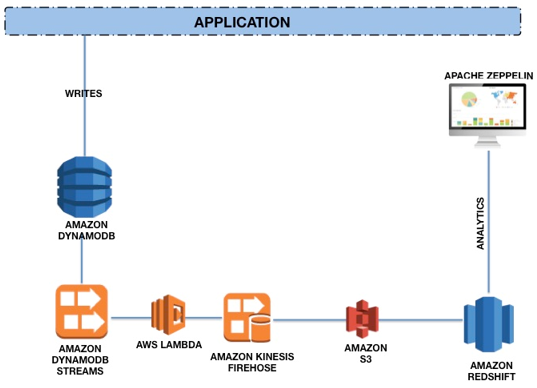