Today, companies of all sizes across all verticals design and build event-driven architectures centered around real-time streaming and stream processing. Amazon Managed Streaming for Apache Kafka (Amazon MSK) is a fully managed service that makes it easy for you to build and run applications that use Apache Kafka to process streaming and event data. Apache Kafka is an open-source platform for building real-time streaming data pipelines and applications. With Amazon MSK, you can continue to use native Apache Kafka APIs to build event-driven architectures, stream changes to and from databases, and power machine learning and analytics applications.

You can apply streaming in a wide range of industries and organizations, such as to capture and analyze data from IoT devices, track and monitor vehicles or shipments, monitor patients in medical facilities, or monitor financial transactions.

We have chosen to run our Kafka Streams application on Fargate, because Fargate makes it easy for you to focus on building your applications. Fargate removes the need to provision and manage servers, lets you specify and pay for resources per application, and improves security through application isolation by design. Fargate allocates the right amount of compute, eliminating the need to choose instances and scale cluster capacity. You only pay for the resources required to run your containers, so there is no over-provisioning and paying for additional servers. Fargate runs each task or pod in its own kernel providing the tasks and pods their own isolated compute environment. This enables your application to have workload isolation and improved security by design.

Our streaming application architecture consists of a stream producer, which connects to the Twitter Stream API, reads tweets, and publishes them to Amazon MSK. A Kafka Streams processor consumes these messages, performs window aggregation, pushes to topic result, and prints out to logs. Both apps are hosted on Fargate.

The stream producer application connects to the Twitter API (a stream of sample tweets), reads the stream of tweets, extracts only hashtags, and publishes them to the MSK topic. The following is a code snippet from the application:

The MSK cluster is spread across three Availability Zones, with one broker per Availability Zone. We use the AWS-recommended (as of this writing) version of Apache Kafka 2.6.1. Apache Kafka topics have a replication factor and partitions of three, to take advantage of parallelism and resiliency.

The logic of our consumer streaming app is as follows; it counts the number of Twitter hashtags, with a minimum length of 1, that have been mentioned more than four times in a 20-second window:

Make sure to complete the following steps as prerequisites:

To implement this solution, we complete the following steps:

Set up an MSK cluster and Amazon ECR

Use the provided AWS CloudFormation template to create the VPC (with other required network components), security groups, MSK cluster with required Kafka topics (twitter_input and twitter_output), and two Amazon ECR repositories, one per each application.

To build and upload the JAR files to Amazon ECR, complete the following steps:

Now you should see images in your Amazon ECR repository (see the following screenshot). 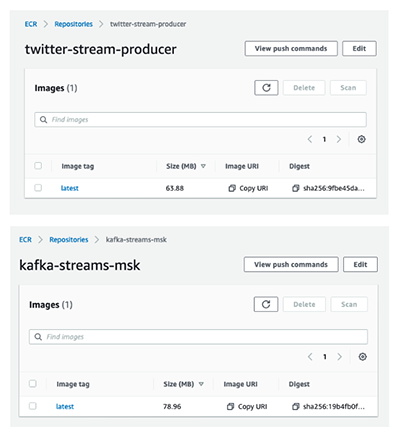 Create an ECS cluster with a Fargate task and service definitions

Use the provided CloudFormation template to create your ECS cluster, Fargate task, and service definitions. Make sure to have Twitter API Bearer Token ready.

When the CloudFormation stack is complete, it automatically deploys your applications. After approximately 10 minutes, all your apps should be up and running, aggregating, and producing results. You can see the result in Amazon CloudWatch logs or by navigating to the Logs tab of the Fargate task. 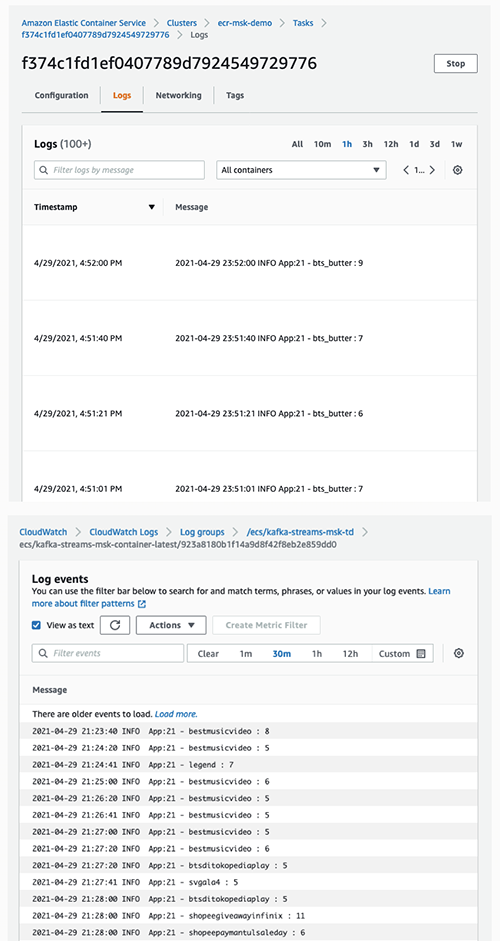 Consider the following when implementing this solution:

In this post, we demonstrated how to build a scalable and resilient real-time stream processing application. We build the solution using the Kafka Streams API, Amazon MSK, and Fargate. We also discussed improvements, considerations, and best practices. You can use this architecture as a reference in your migrations or new workloads. Try it out and share your experience in the comments!