Many features in Amazon Redshift access other services, for example, when loading data from Amazon Simple Storage Service (Amazon S3). This requires you to create an AWS Identity and Access Management (IAM) role and grant that role to the Amazon Redshift cluster. Historically, this has required some degree of expertise to set up access configuration with other AWS services. For details about IAM roles and how to use them, see Create an IAM role for Amazon Redshift.

This post discusses the introduction of the default IAM role, which simplifies the use of other services such as Amazon S3, Amazon SageMaker, AWS Lambda, Amazon Aurora, and AWS Glue by allowing you to create an IAM role from the Amazon Redshift console and assign it as the default IAM role to new or existing Amazon Redshift cluster. The default IAM role simplifies SQL operations that access other AWS services (such as COPY, UNLOAD, CREATE EXTERNAL FUNCTION, CREATE EXTERNAL SCHEMA, CREATE MODEL, or CREATE LIBRARY) by eliminating the need to specify the Amazon Resource Name (ARN) for the IAM role.

The Amazon Redshift SQL commands for COPY, UNLOAD, CREATE EXTERNAL FUNCTION, CREATE EXTERNAL TABLE, CREATE EXTERNAL SCHEMA, CREATE MODEL, or CREATE LIBRARY historically require the role ARN to be passed as an argument. Usually, these roles and accesses are set up by admin users. Most data analysts and data engineers using these commands aren’t authorized to view cluster authentication details. To eliminate the need to specify the ARN for the IAM role, Amazon Redshift now provides a new managed IAM policy AmazonRedshiftAllCommandsFullAccess, which has required privileges to use other related services such as Amazon S3, SageMaker, Lambda, Aurora, and AWS Glue. This policy is used for creating the default IAM role via the Amazon Redshift console. End-users can use the default IAM role by specifying IAM_ROLE with the DEFAULT keyword. When you use the Amazon Redshift console to create IAM roles, Amazon Redshift keeps track of all IAM roles created and preselects the most recent default role for all new cluster creations and restores from snapshots.

Create a new cluster and set up the IAM default role

This page lists the clusters in your account in the current Region. A subset of properties of each cluster is also displayed.

If you don’t know how large to size your cluster, choose Help me choose. Doing this starts a sizing calculator that asks you questions about the size and query characteristics of the data that you plan to store in your data warehouse.

Amazon Redshift automatically creates and sets the IAM role as the default for your cluster. 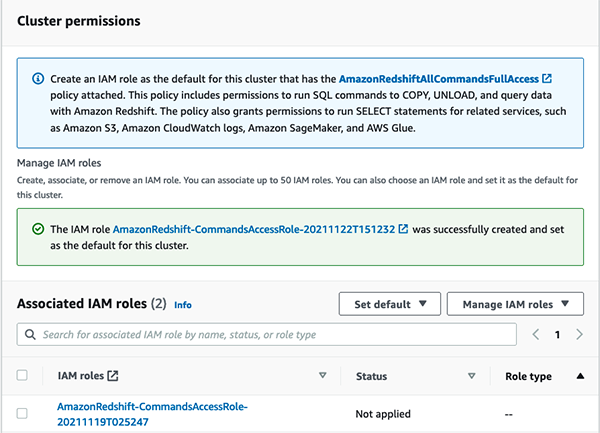 The cluster might take several minutes to be ready to use. You can verify the new default IAM role under Cluster permissions.

You can also attach your existing role to the cluster and make it default IAM role for more granular control of permissions with customized managed polices.

Your IAM role is now listed as default.

Make an IAM role no longer default for your cluster

You can make an IAM role no longer the default role by changing the cluster permissions.

Use the default IAM role to run SQL commands

First verify the cluster is using the default IAM role, as shown in the following screenshot.

The SQL in the following screenshot describes how to load data from Amazon S3 using the default IAM role.

With an Amazon Redshift lake house architecture, you can query data in your data lake and write data back to your data lake in open formats using the UNLOAD command. After the data files are in Amazon S3, you can share the data with other services for further processing.

The SQL in the following screenshot describes how to unload data to Amazon S3 using the default IAM role.

Redshift Spectrum is a feature of Amazon Redshift that allows you to perform SQL queries on data stored in S3 buckets using external schema and external tables. This eliminates the need to move data from a storage service to a database, and instead directly queries data inside an S3 bucket. Redshift Spectrum also expands the scope of a given query because it extends beyond a user’s existing Amazon Redshift data warehouse nodes and into large volumes of unstructured S3 data lakes.

The default IAM role requires redshift as part of the catalog database name or resources tagged with the Amazon Redshift service tag due to security considerations. You can customize the policy attached to default role as per your security requirement. In the following example, we use the AWS Glue Data Catalog name redshift_data.

This post showed you how the default IAM role simplifies SQL operations that access other AWS services by eliminating the need to specify the ARN for the IAM role. This new functionality helps make Amazon Redshift easier than ever to use, and reduces reliance on an administrator to wrangle these permissions.

As an administrator, you can start using the default IAM role to grant IAM permissions to your Redshift cluster and allow your end-users such as data analysts and developers to use default IAM role with their SQL commands without having to provide the ARN for the IAM role.

Nita Shah is an Analytics Specialist Solutions Architect at AWS based out of New York. She has been building data warehouse solutions for over 20 years and specializes in Amazon Redshift. She is focused on helping customers design and build enterprise-scale well-architected analytics and decision support platforms.

Evgenii Rublev is a Software Development Engineer on the AWS Redshift team. He has worked on building end-to-end applications for over 10 years. He is passionate about innovations in building high-availability and high-performance applications to drive a better customer experience. Outside of work, Evgenii enjoys spending time with his family, traveling, and reading books.