The Amazon Chime SDK Public Switched Telephone Network (PSTN) audio service to make it easier for developers to build customized telephony applications using the agility and operational simplicity of a serverless AWS Lambda function. Starting today, developers can record voice calls and store the recordings in the Amazon Simple Storage Service (Amazon S3) bucket of their choice using the call recording feature. That means you can now implement call recording in the applications that you build, including voice menu trees, remote call forwarding, and call routing. 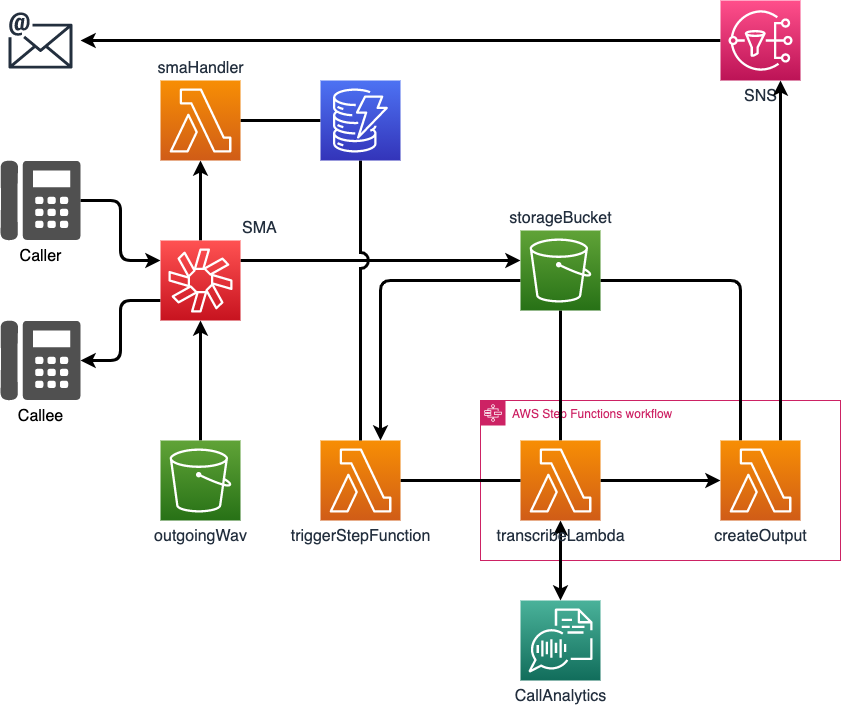 Cloud 9 Deployment is recommend to ensure the correct build of the Docker containers.

Upon successfully deploying the CDK components, take note of the phone number in the output of the deployment script. This is the SMA phone number provisioned as described in the Resources Created section; it will be used by the application owner, who has the Interviewer role, as well as other demo user who will play the Interviewee role. When the Interviewer calls the SMA application number from their primary phone number (SourcePhone) provided during deployment, they will hear a prompt to enter the phone number to be called (the Interviewee’s number). Once the target number is entered, your SIP media application will dial that phone number. When the Interviewee answers this call, they will hear a prompt that the call will be recorded, and the demo users will be able to talk. During the conversation, the Interviewer will be able to pause, resume, and stop the call recording using the DTMF commands (pause 5, resume 6, stop 7). When the call ends and both parties have disconnected, a wav audio file with call recording is written to the configured Amazon S3 bucket. This PutObject request starts the process of transcribing the audio and the following steps creating the final output document. The download links to the audio file and the transcription file will be subsequently emailed to the Primary User.

Conversely, if anyone but the primary user dials the SMA application number, a prompt will be played informing the caller that the call is being recorded and then the Primary User is called automatically. Once completed, the same workflow as above will execute, producing a formatted transcript and emailing its download link to the Primary User.

This application is comprised of several components that work together without being strictly coupled to each other. The Amazon Chime SIP media application is the main entry point in either direction and will be used for the duration of the call. This SIP media application is controlled by the smaHandler Lambda function using an Invocation and Action response process described here. All of the call routing logic is contained within this Lambda and makes use of the CallAndBridge action to route calls from one user to another. This Lambda also starts the recording process by directing the output to an S3 bucket with the following action:

Once the recording has been delivered to the S3 bucket, a Lambda is triggered from the PutObject event. This Lambda will trigger a Step Function to transcribe and process the transcription.

The transcription uses the Amazon Transcribe Call Analytics feature and is called here:

Once the transcription is complete, the createOutput Lambda will be invoked by the Step Function to produce a document with the full turn by turn transcription along with other analytics. This Lambda makes use of the application described here and uses an SNS topic to deliver a link to the created output file.

To clean up this demo execute: cdk destroy. The S3 buckets that are created will be emptied and destroyed as part of this destroy so if you wish to keep the files, they should be moved prior to the destruction of the demo solution.

The sample telephone interview solution presented in is blog demonstrates the basic techniques for implementing on-demand call recording functionality in your Amazon Chime SDK SIP Media Applications. It shows how to start, stop, pause, and resume phone call recording programmatically and by the DTMF commands during the call, how to store the recording audio files, as well as precise control of what parts of the call shall be recorded. You have also experienced powerful speech analytics capabilities available through Amazon Transcribe Call Analytics. You can leverage the technology and the development patters showcased in this demo to implement a broad spectrum of solutions for the specialized industry applications, like, public media, insurance, remote healthcare and education, enterprise telephony and collaboration, augment cloud-based or on-premises call centers with interaction recording and quality management, and machine learning enabled speech analytics capabilities.

Please see our github repo for the example code: https://github.com/aws-samples/amazon-chime-sma-on-demand-recording