This post is courtesy of Markus Ziller, Solutions Architect.

Today, git is a de facto standard for version control in modern software engineering. The workflows enabled by git’s branching capabilities are a major reason for this. However, with git’s distributed nature, it can be difficult to reliably remove changes that have been committed from all copies of the repository. This is problematic when secrets such as API keys have been accidentally committed into version control. The longer it takes to identify and remove secrets from git, the more likely that the secret has been checked out by another user.

This post shows a solution that automatically identifies credentials pushed to AWS CodeCommit in near-real-time. I also show three remediation measures that you can use to reduce the impact of secrets pushed into CodeCommit:

I use the AWS Cloud Development Kit (CDK). This is an open source software development framework to model and provision cloud application resources. Using the CDK can reduce the complexity and amount of code needed to automate the deployment of resources.

The services in this solution are AWS Lambda, AWS CodeCommit, Amazon EventBridge, and Amazon SNS. These services are part of the AWS serverless platform. They help reduce undifferentiated work around managing servers, infrastructure, and the parts of the application that add less value to your customers. With serverless, the solution scales automatically, has built-in high availability, and you only pay for the resources you use. 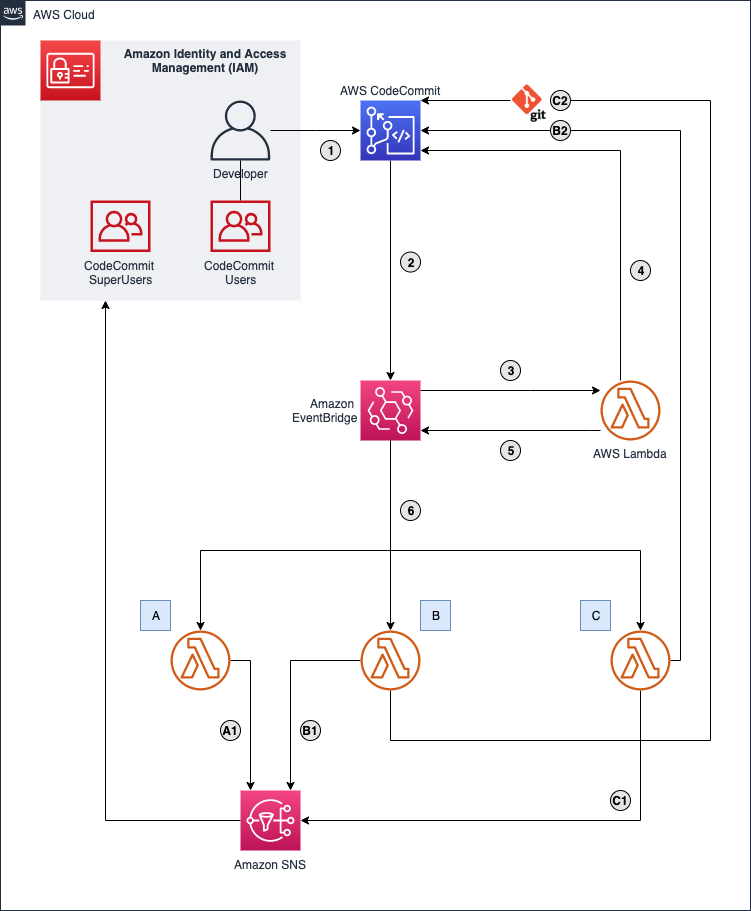 This diagram outlines the workflow implemented in this blog:

The following walkthrough explains the required components, their interactions and how the provisioning can be automated via CDK.

For this walkthrough, you need:

Checkout and deploy the sample stack:

The CDK will deploy resources for the following services in your account.

The CDK creates a new empty repository called TestRepository and adds a tag RepoState with an initial value of ok. You later use this tag in the LockRepo remediation strategy to restrict access.

I also import the CodeCommitSystemUser into the CDK. Since the user requires git credentials in a downloaded CSV file, it cannot be created by the CDK. Instead it must be created as described in the README file.

The following CDK code sets up all the described resources:

I use EventBridge, a serverless event bus, to connect the Lambda functions together. Many AWS services like CodeCommit are natively integrated into EventBridge and publish events about changes in their environment.

repo.onCommit is a higher-level CDK construct. It creates the required resources to invoke a Lambda function for every commit to a given repository. The created events rule looks like this: 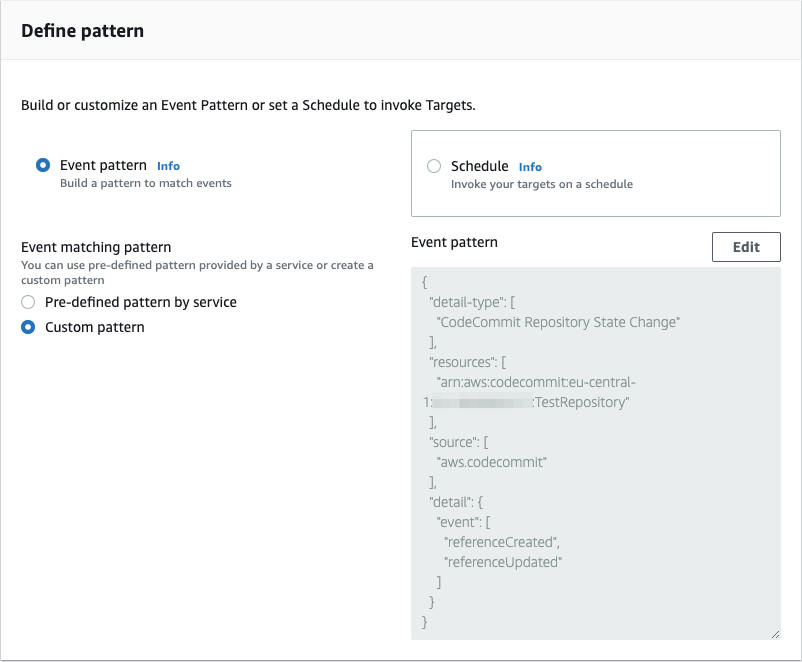 Note that this event rule only matches commit events in TestRepository. To send commits of all repositories in that account to the inspecting Lambda function, remove the resources filter in the event pattern.

CodeCommit Repository State Change is a default event that is published by CodeCommit if changes are made to a repository. In addition, I define CodeCommit Security Event, a custom event, which Lambda publishes to the same event bus if secrets are discovered in the inspected code.

The sample below shows how you can set up Lambda functions as targets for both type of events.

By comparing the delta to its predecessor, the commitInspectLambda function analyzes if secrets are introduced by a commit. With the CDK, you can create a Lambda function with:

The code for this Lambda function uses the AWS SDK for JavaScript to fetch the details of the commit, the differences introduced, and the new content.

If a secret is discovered, a CodeCommit Security Event is published to the event bus. EventBridge then invokes all Lambda functions that are registered as targets with this event. This demo triggers three remediation measures.

The raiseAlertLambda function uses the AWS SDK for JavaScript to send out a notification to all subscribers (that is, CodeCommit administrators) on an SNS topic. It takes no further action.

The lockRepositoryLambda function uses the AWS SDK for JavaScript to change the RepoState tag from ok to locked. This restricts access to members of the CodeCommitSuperUsers IAM group.

These commands reset the repository to the last accepted commit, by forcefully removing the respective commit from the git history of your CodeCommit repo. I advise you to handle this with care and only activate it on a real project if you fully understand the consequences of rewriting git history.

The Node.js v12 runtime for Lambda does not have a git runtime installed by default. You can add one by using the git-lambda2 Lambda layer. This allows you to run git commands from within the Lambda function.

Finally, this Lambda function also sends out a notification. The complete code is available in the GitHub repo.

To notify users about secrets discovered and actions taken, you create an SNS topic and subscribe to it via email.

You can test the deployed solution by running these two sets of commands. First, add a file with no credentials:

Then add a file containing credentials:

If you check your email, you soon receive notifications about actions taken by the Lambda functions.

To avoid incurring charges, delete the resources by running cdk destroy and confirming the deletion.

This post demonstrates how you can implement a solution to discover secrets in commits to AWS CodeCommit repositories. It also defines different strategies to remediate this.

The CDK code to set up all components is minimal and can be extended for remediation measures. The template is portable between Regions and uses serverless technologies to minimize cost and complexity.