When processing data from event sources such as Amazon Kinesis Data Streams, and Amazon DynamoDB Streams, Lambda reads records in batches via shards. A shard is a uniquely identified sequence of data records. Your function is then invoked to process records from the batch “in order.” If an error is returned, Lambda retries the batch until processing succeeds or the data expires. This retry behavior is desirable in many cases, but not all: 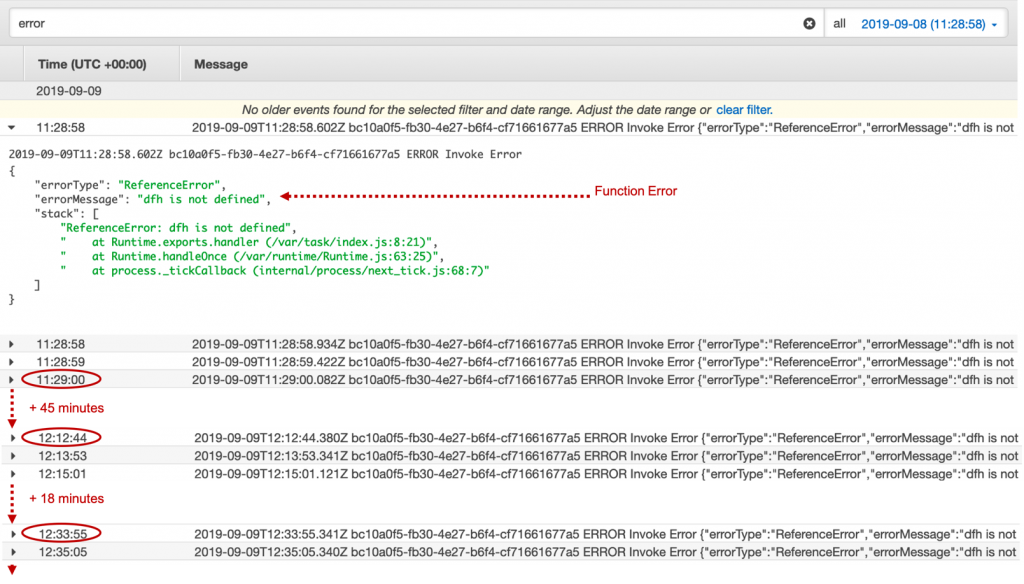 With the new customizable controls, users are able to control how function errors and retries impact stream processing function invocations. A new event source-mapping configuration subresource (shown below), allows developers to clearly specify which controls will apply specifically to invocations.

Set a maximum number of retry attempts for batches before they can be skipped to unblock processing and prevent duplicate outputs.

Define a record maximum age in seconds, with expired records skipped to allow processing to continue. Data records that do not get successfully processed within the defined age of submission are skipped

This gives the option to recursively split the failed batch and retry on a smaller subset of records, eventually isolating the metadata causing the error.

When either MaximumRetryAttempts or MaximumRecordAgeInSeconds reaches the specified value, a record will be skipped. If ‘Destination’ is set, metadata about the skipped records can be sent to a target ARN (i.e. Amazon SQS or Amazon SNS). If no target is configured, then the record will be dropped.

Getting started with error handling for stream processing invocations

Here you will see how to use the new controls to create a customized error handling configuration for stream processing invocations. You will set the maximum retry attempts to 1, the maximum record age to 60s, and send the metadata of skipped record to an Amazon Simple Queue Service (SQS) queue. First create a Kinesis Stream to put records into, and create an SQS queue to hold the metadata of retry exhausted or expired data records.

Here you will see the metadata of your failed invocation. It has successfully been sent to the SQS destination for further investigation or processing.

When a function is asynchronously invoked, Lambda sends the event to a queue before it is processed by your function. Invocations that result in an exception in the function code are retried twice with a delay of one minute before the first retry and two minutes before the second. Some invocations may never run due to a throttle or service fault: these are retried with exponential backoff until the invocation is six hours old.

This retry behaviour shown above, works well in situations where every invocation must run at least once. However, in situations with a large volume of errors subsequent invocations are increasingly delayed as the backlog increases, as each new error places another retry event back into the event queue. If it were possible to skip the event without retrying, it would eliminate this delay and continue processing new events.

In order to avoid this default auto-retry policy, there are several widely used approaches:

These workarounds require extra resources, code, or custom logic and add latency to your applications. Retries caused by system failures due to timeouts, lack of memory, early exits, etc. could still occur.

New asynchronous event invoke controls mean that functions can now skip the processing of certain events and discard unwanted or backlogged requests from the asynchronous event queue without the need for “workarounds.” The controls will be accessible from the console and from a new Event Invoke Config subresource, listed in detail below:

Set a maximum number of retry attempts for events before they can be skipped to unblock processing and prevent duplicate outputs.

Define an event maximum age in seconds, with expired events skipped to allow processing to continue. Events that do not get successfully processed within defined age of submission are written to the function’s configured Dead Letter Queue and/or On-failure Destinations for asynchronous invocations. If none is configured, the event is discarded.

These controls can also be configured from the AWS Lambda console, in the “Failure handling configuration” section shown below:

When the same Lambda function is run with maximum retry attempts set to 0, the Amazon CloudWatch Logs show that the function is only invoked a single time, and not retried after the initial error.

The addition of these new Lambda controls allows you to handle function failures and retries appropriately for both asynchronous and stream processing. This eliminates the need for custom-built logic, alerts, and added overhead.

Developers understand the needs of their own applications. These new features allow them to decide how to react to errors on a per-function basis. Whether that means real-time stream processing, non-blocking event queues, or more retries, it depends on the application’s requirements. With the new controls in place, the power is in your hands.

You can get started with the new controls for stream processing and asynchronous invocations via the AWS Management Console, AWS CLI, AWS SAM, AWS CloudFormation, or AWS SDK for Lambda.