AWS App Mesh is a service mesh, which provides a framework to control and monitor services spanning multiple AWS compute environments. My previous post provided a walkthrough to get you started. In it, I showed deploying a simple microservice application to Amazon ECS and configuring App Mesh to provide traffic control and observability.

In this post, I show more advanced techniques using AWS Fargate as an ECS launch type. I show you how to deploy a specific version of the colorteller service from the previous post. Finally, I move on and explore distributing traffic across other environments, such as Amazon EC2 and Amazon EKS.

I simplified this example for clarity, but in the real world, creating a service mesh that bridges different compute environments becomes useful. Fargate is a compute service for AWS that helps you run containerized tasks using the primitives (the tasks and services) of an ECS application. This lets you work without needing to directly configure and manage EC2 instances.

This post assumes that you already have a containerized application running on ECS, but want to shift your workloads to use Fargate.

In App Mesh, every version of a service is ultimately backed by actual running code somewhere, in this case ECS/Fargate tasks. Each service has its own virtual node representation in the mesh that provides this conduit.

The following diagram shows the App Mesh configuration of the Color App. 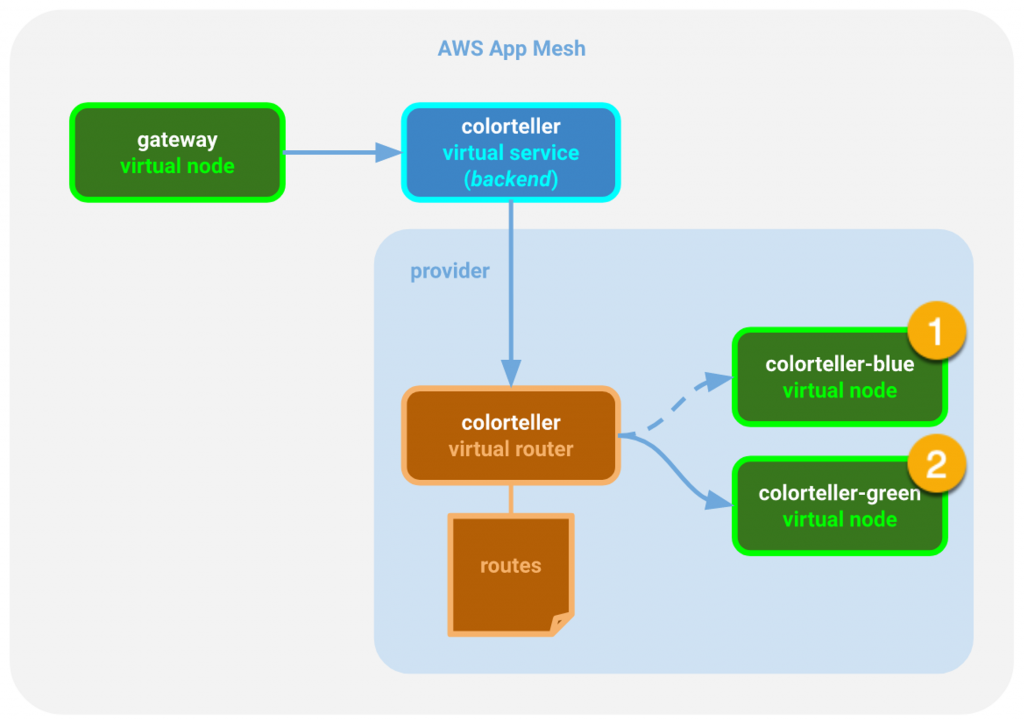 Before following along, set up the resources and deploy the Color App as described in the previous walkthrough.

To get started after you complete your Color App, configure it so that your traffic goes to colorteller-blue for now. The blue color represents version 1 of your colorteller service.

Log into the App Mesh console and navigate to Virtual routers for the mesh. Configure the HTTP route to send 100% of traffic to the colorteller-blue virtual node.

The following screenshot shows routes in the App Mesh console. 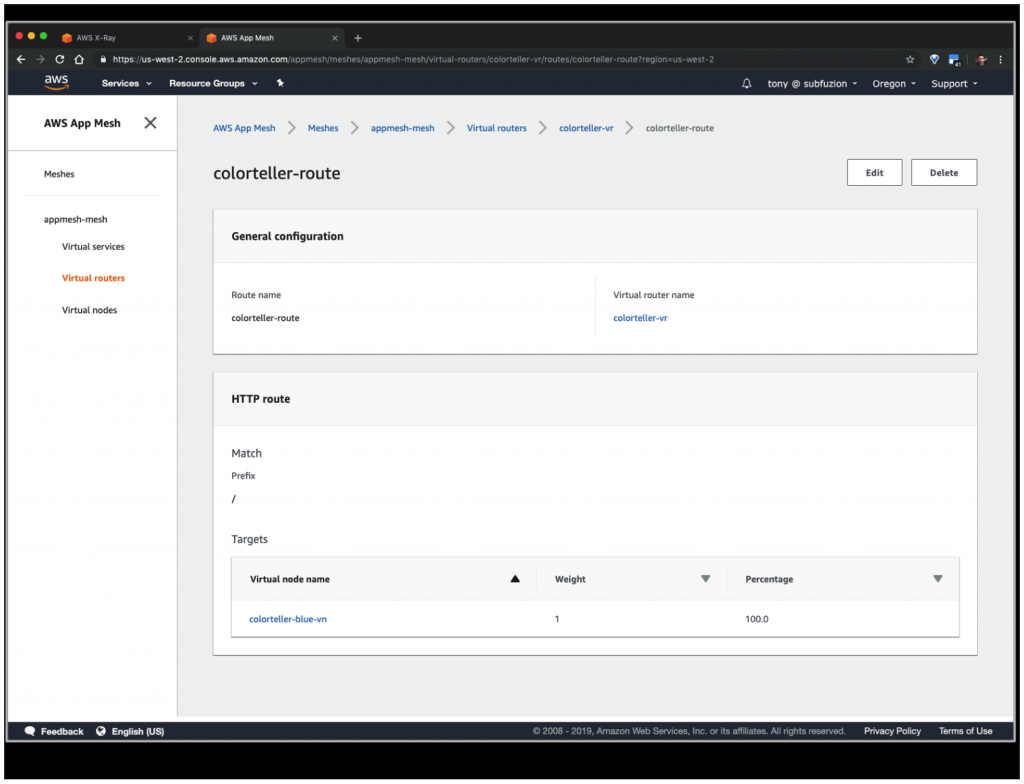 Test the service and confirm in AWS X-Ray that the traffic flows through the colorteller-blue as expected with no errors. 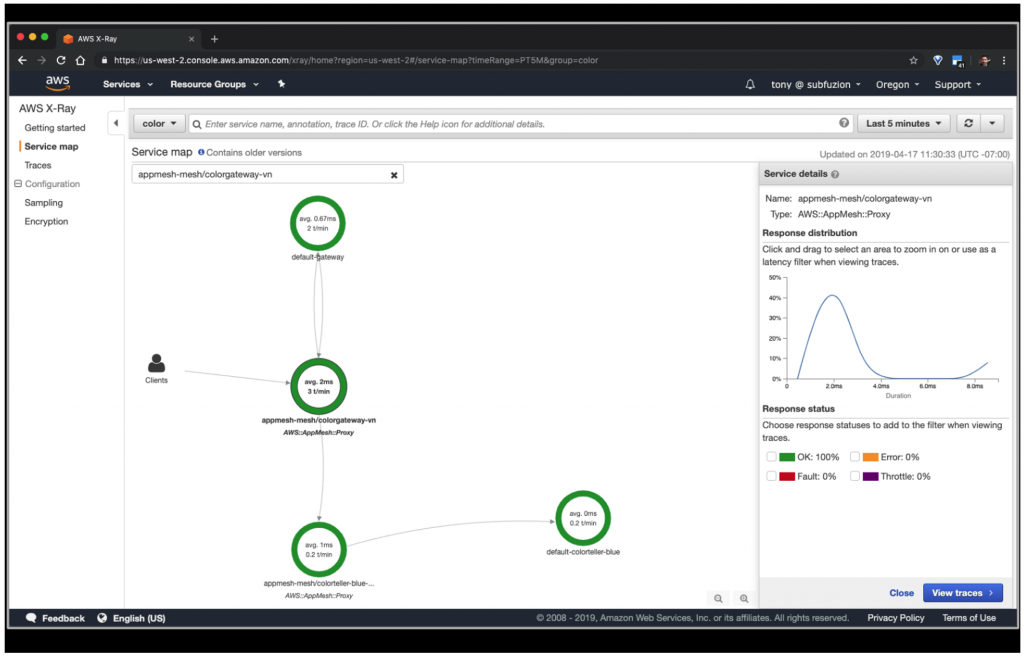 Deploy the new colorteller to Fargate

With your original app in place, deploy the send version on Fargate and begin slowly increasing the traffic that it handles rather than the original. The app colorteller-green represents version 2 of the colorteller service. Initially, only send 30% of your traffic to it.

If your monitoring indicates a healthy service, then increase it to 60%, then finally to 100%. In the real world, you might choose more granular increases with automated rollout (and rollback if issues arise), but this demonstration keeps things simple.

You pushed the gateway and colorteller images to ECR (see Deploy Images) in the previous post, and then launched ECS tasks with these images. For this post, launch an ECS task using the Fargate launch type with the same colorteller and envoy images. This sets up the running envoy container as a sidecar for the colorteller container.

You don’t have to manually configure the EC2 instances in a Fargate launch type. Fargate automatically colocates the sidecar on the same physical instance and lifecycle as the primary application container.

To begin deploying the Fargate instance and diverting traffic to it, follow these steps.

You can download updated AWS CloudFormation templates located in the repo under walkthroughs/fargate.

This updated mesh configuration adds a new virtual node (colorteller-green-vn). It updates the virtual router (colorteller-vr) for the colorteller virtual service so that it distributes traffic between the blue and green virtual nodes at a 2:1 ratio. That is, the green node receives one-third of the traffic.

Waiting for changeset to be created..
Waiting for stack create/update to complete
Successfully created/updated stack - DEMO-fargate-colorteller
$

The ColorApp endpoint is one of the CloudFormation template’s outputs. You can view it in the stack output in the AWS CloudFormation console, or fetch it with the AWS CLI:

Assign the endpoint to the colorapp environment variable so you can use it for a few curl requests:

The 2:1 weight of blue to green provides predictable results. Clear the histogram and run it a few times until you get a green result:

This reflects the expected result for a 2:1 ratio. Check everything on your AWS X-Ray console.

The following screenshot shows the X-Ray console map after the initial testing. 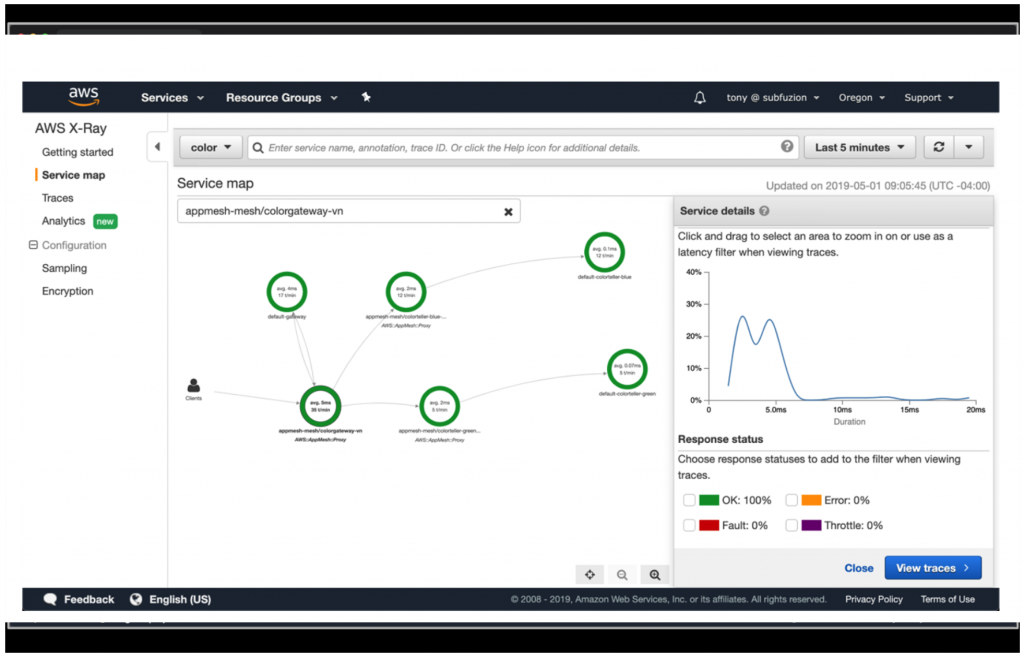 You can now increase the rollout of the new (green) version of your service running on Fargate.

For this post, use the App Mesh console to make the change. Choose Virtual routers for appmesh-mesh, and edit the colorteller-route. Update the HTTP route so colorteller-blue-vn handles 33.3% of the traffic and colorteller-green-vn now handles 66.7%.

If your results look good, double-check your result in the X-Ray console.

Finally, shift 100% of your traffic over to the new colorteller version using the same App Mesh console. This time, modify the mesh configuration template and redeploy it:

Again, repeat your verification process in both the CLI and X-Ray to confirm that the new version of your service is running successfully.

In this walkthrough, I showed you how to roll out an update from version 1 (blue) of the colorteller service to version 2 (green). I demonstrated that App Mesh supports a mesh spanning ECS services that you ran as EC2 tasks and as Fargate tasks.

In my next walkthrough, I will demonstrate that App Mesh handles even uncontainerized services launched directly on EC2 instances. It provides a uniform and powerful way to control and monitor your distributed microservice applications on AWS.

If you have any questions or feedback, feel free to comment below.