AWS PrivateLink is a networking technology designed to enable access to AWS services in a highly available and scalable manner. It keeps all the network traffic within the AWS network. When you create AWS PrivateLink endpoints for Amazon Elastic Container Registry (ECR) and Amazon Elastic Container Service (ECS), these service endpoints appear as elastic network interfaces with a private IP addresses in your VPC.

Now, instances in both public and private subnets can use AWS PrivateLink to get private connectivity to download images from ECR. Instances can also communicate with the ECS control plane via AWS PrivateLink endpoints without needing an internet gateway or NAT gateway.
In this post, we show how AWS PrivateLink can be used while deploying an AWS Fargate Service accessing and downloading Docker container images shared by another account in the same region using AWS PrivateLink. We are using two accounts to demonstrate how a multi-account strategy can be used to achieve isolation between development and production and as a security implementation. The same implementation would be identical should you operate out of a single account. This provides an example of private container development and deployment using AWS PrivateLink to a private AWS Fargate cluster accessible via a public facing Application Load Balancer. 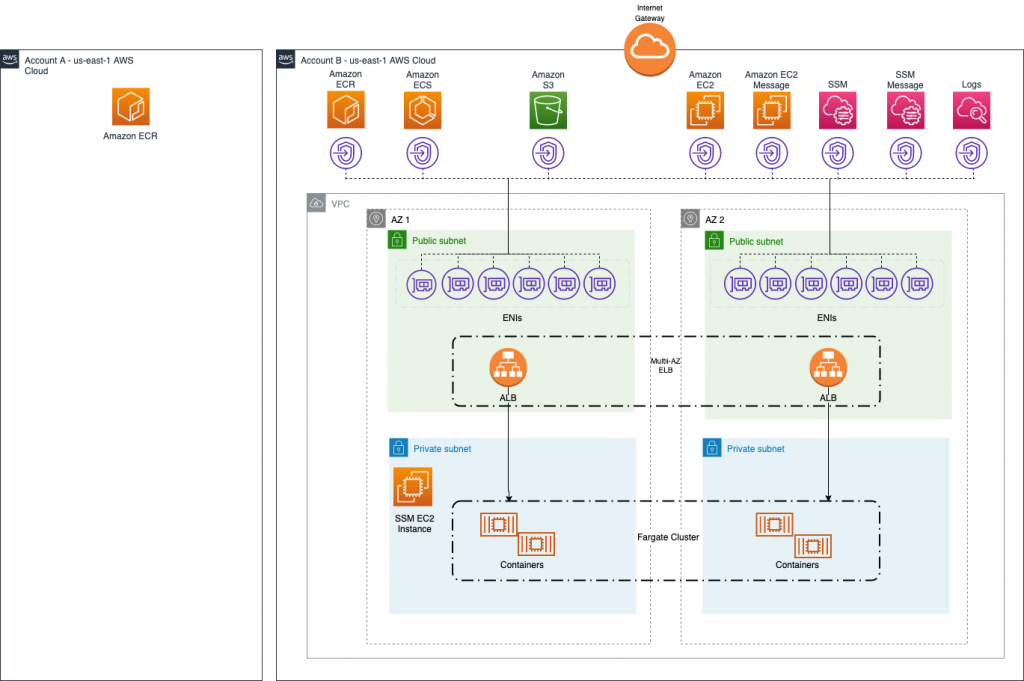 Above, AWS PrivateLink endpoints are deployed into our public subnets. Private DNS for the endpoints is enabled in order to allow you to make requests to the service using its default DNS hostname.

We are creating the following endpoints to allow for private communications to ECS and ECR:

Optionally, we are also creating AWS PrivateLink endpoints to allow for connectivity to an EC2 instance that will be deployed into once of our private subnets. We use AWS Systems Manager to connect to this instance and show the internal DNS resolution for the ECR endpoint.

In order to follow along, you need two AWS accounts. We start with setting up our accounts. You must switch between accounts during the setup process. For simplicity, we refer to this as Account A and Account B.

Account A contains our ECR, and we publish an example container to this registry for our demo.

Account B contains our VPC infrastructure, including our AWS PrivateLink configurations.

You will also need a working Docker environment to execute Docker commands.

Pull the GitHub repository at github.com/aws-samples/amazon-ecr-privatelink-blog. We use the contents of this repository to set up accounts using AWS CloudFormation and to build our example Docker container.

Before proceeding, configure AWS CLI profiles for Account A and Account B. Ensure to set the same region in both profiles.  For this walkthrough, set the region to us-east-2, as all AWS CloudFormation launches are pointing to us-east-2.  For more information on setting account profiles, see the documentation.

It is assumed you are using a profile with enough privileges to operate all calls involved.

The following four steps are applicable to Account A

Step one: Create an Amazon Elastic Container Registry repository in Account A

For this stack use the following parameter information, ensure you are logged into the Account A console. 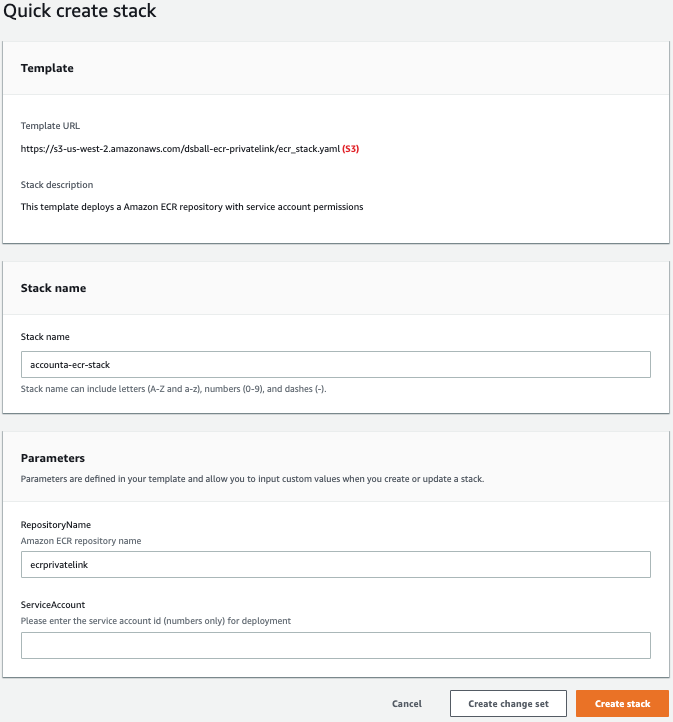 The following repository permissions are granted for Account B, which allow for listing and retrieval of container images.

Once this AWS CloudFormation completes, go to ECS in the console and click on the repository created and make note of the repository URI. We use this to tag our Docker image when pushing to our Amazon ECR repository.

Next, using the AWS CLI and Docker, we will log in, build, tag, and push a sample container into our newly created repository.

Using the Docker command line interface, build our sample container (NGINX) and push it to the repository for use within our region, cross account demo. Our example container is based on nginx:mainline-alpine. Moving into the Docker folder within the pulled repository:

Proceed once you see the the indication of a successful local container build:

Next we tag and push this image for our repository. Here we are adding the ‘v1’ tag.

You can see the newly published image version from the ECS console, by clicking on the repository.

The following steps are applicable to Account B. The account is broken out into three CloudFormation templates; networking, service, and an optional EC2 instance with SSM stack so that we can verify that the ECR DNS resolution is internal addressing. Ensure you have switched to Account B before launching the below stacks.

This generates the VPC architecture in Image 1. Two public, two private subnets, AWS PrivateLink endpoints and a public facing Application Load Balancer, which is used to serve up our application in our private subnets.  Make note of the outputs for this stack, specifically ExternalUrl. We use this URL to verify that our Fargate Service is up and running.

Once we have deployed these two stacks, our demo service with two tasks running in a Fargate cluster load balanced across two private subnets should be up and running. Observe at the ECS console.

You can now navigate to the Application Load Balancer public endpoint (ExternalUrl output from the accountb-networking-stack) to observe this service executing: 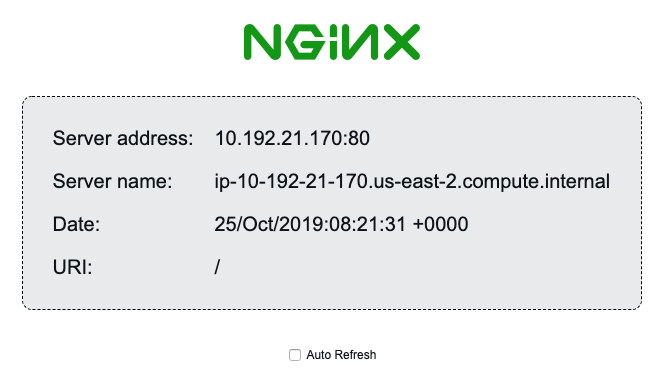 The instances in your ECS cluster residing in private subnets can communicate directly with the ECS control plane. They should be able to download Docker images directly without needing to make any connections outside of your VPC using an internet gateway or NAT gateway. All container orchestration traffic stays inside the VPC.  Also shown is the ability to privately develop and deploy containers with public access to end application.  Additionally, the outline about could be entirely private, using internal ALB and no public subnets.