Today, Amazon Web Services (AWS) announced the support for Fluent Bit container images for Windows operating system. This support eliminates the need for Windows customers to implement any custom logging solutions in their application code or manage custom agents on their Windows instances to scrape the logs. For more details about the supported Windows versions and the image tags for Fluent Bit, please visit our documentation here. 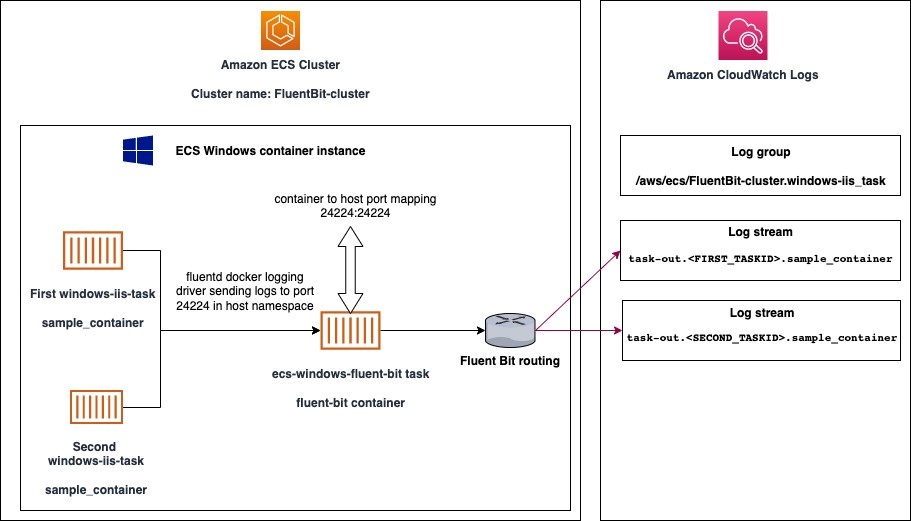 In order to set up Fluent Bit on Amazon ECS, we’ll use the following approach:

Therefore, the end-to-end workflow is as follows:

We have created some default Fluent Bit configurations to help you get started with minimal effort. For more information, visit the documentation here.

In this post, we’ll use the default Amazon CloudWatch Fluent Bit configuration, which would:

For example, if you have the following task definitions with the containers as:

Assuming each of these task definitions has a single task running in an Amazon ECS cluster named windows, then we get the following Amazon CloudWatch log groups and streams:

1. Create a new role named buildInstanceRole, which is used by your Windows build instance to create and push Amazon ECR images. If you are running in a production environment, then we recommend that you customize the role policies for minimal permissions.

For this post, you need to push docker image to Amazon ECR. Therefore, attach the following inline policy to your build instance IAM role.

To attach the inline policy to your instance IAM role, perform the following operations:

3. Create an IAM role for the Fluent Bit task named fluentTaskRole. For more information, see Creating an IAM role and policy for your tasks.

The AWS IAM permissions granted in this IAM role are assumed by the task containers. In order to allow Fluent Bit to send logs to Amazon CloudWatch, you need to attach the following permissions to the task AWS IAM role.

To attach the inline policy to your task AWS IAM role:

4. [Optional] Create an AWS IAM role for the Windows task named iisTaskRole, which is used to generate the logs. This is required only if you want you access your Windows task containers for generating logs as described in Step 9.

To attach the inline policy to your task AWS IAM role:

If you already have a Windows container image for your application, you can skip this section.

For more instructions about how to use LogMonitor, see the GitHub repository or Microsoft post.

In the example below, we have a Dockerfile to build the Windows container image containing IIS and LogMonitor.

This sample LogMonitorConfig configuration retrieves all the logs files with the extension .log saved in C:\inetpub\logs and sub directories, including the IIS access logs.

As the build completes, push the image to your Amazon ECR repository.

To create an Amazon ECS instance;

To ensure that the Windows customers can get started quickly, we have crafted default configurations for the following Fluent Bit output destinations which are present in the container images:

In order to use the same, you need to ensure that:

These labels are added by Amazon ECS agent to each container.

Every log that gets into Fluent Bit has a tag that you specify, or it is automatically generated when you do not supply one. The tags can be used for routing the log entry to different filters and output plugins. For additional information, see Tag in the Fluent Bit Official Manual.

In this Fluent Bit configuration:

To register a task definition:

This task definition overrides the default entrypoint with a custom entrypoint command:

Additionally, as documented in the configuration here, we have added the environment variable AWS_REGION to the container definition.

Note: This task definition exposes Fluent Bit container port 24224 to the host port 24224. Verify that this port is not open in your Amazon EC2 instance security group to prevent access from outside. For more information about security groups, refer to Amazon VPC docs here.

You can list the task definitions for your account by running the list-task-definitions command. The output of displays the family and revision values that you can use together with run-task or start-task.

To run a task

1. Run the following command to run the ecs-windows-fluent-bit:1 task definition that you registered in the previous step.

Note: Because ecs-windows-fluent-bit uses awslogs logging driver, your container instance needs to have the necessary permissions.

7. Register a Windows task definition with application containers which generates the logs

To register a task definition

Note: This task uses the default network mode; however, you can also use the awsvpc network mode with the task.

You can list the task definitions for your account by running the list-task-definitions command. The output of displays the family and revision values that you can use together with run-task or start-task.

After you register the windows-iis-task task definition, run multiple counts of the same in your FluentBit-cluster cluster.

To run a task

If you don’t want to access task containers using Amazon ECS Exec, then omit --enable-execute-command from above command.

You can either wait for actual traffic to hit your Windows pod hosting the IIS webserver, or you can log into your container and force the logs.

9 Run the following command to log into your container-:

9 From inside the container, run the following command to hit the web server:

10. Verify the logs on Amazon CloudWatch

In order to verify your Fluent Bit setup, check for the following log groups in the Amazon CloudWatch Console: 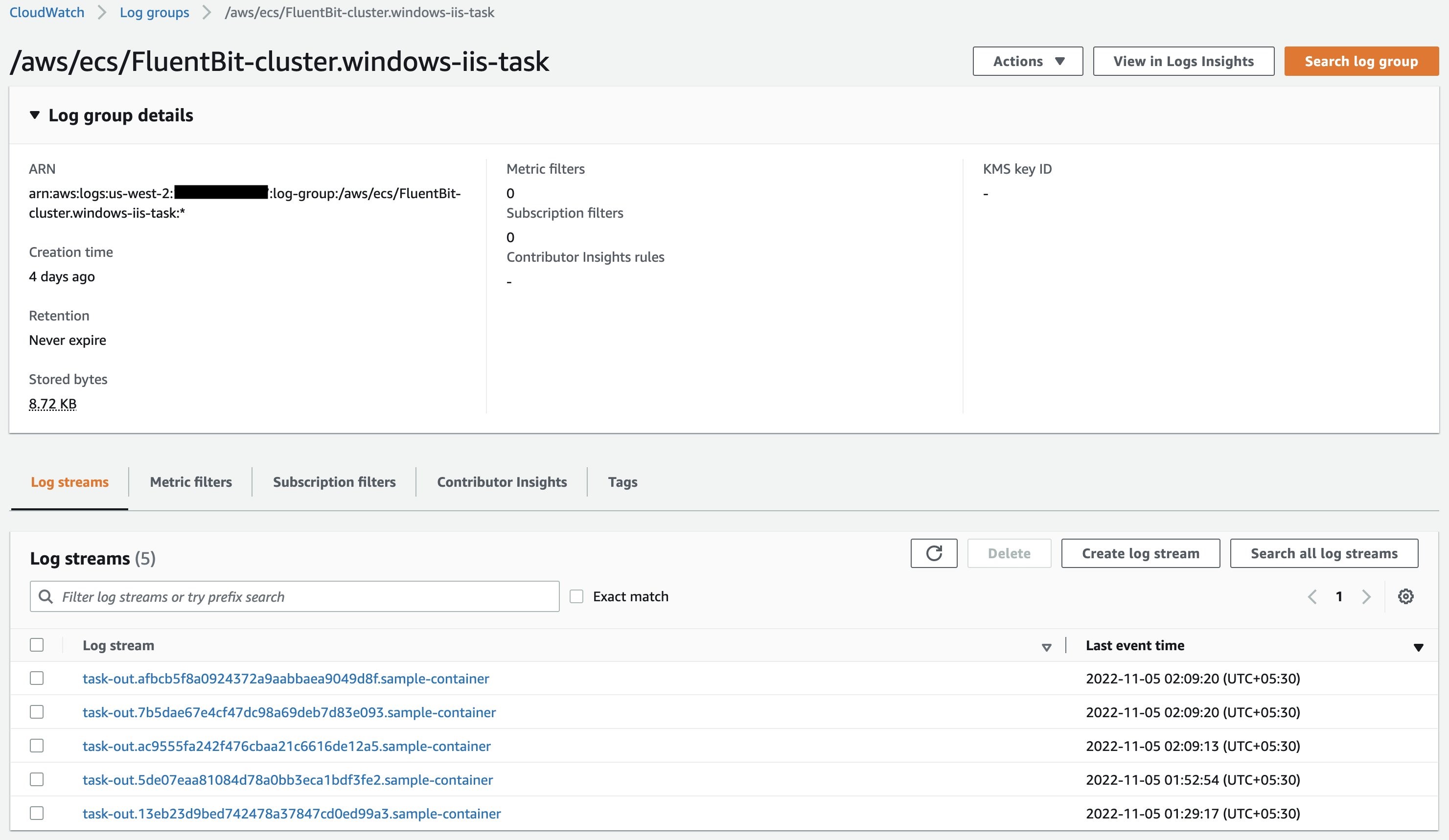 If you see these log groups and streams in the Amazon CloudWatch console, then Fluent Bit setup is verified.

When you have finished, clean up the resources associated with it to avoid incurring charges for resources that you aren’t using.

To clean up the tutorial resources

In this post, we showed you how to deploy Fluent Bit on your Windows instances in Amazon ECS.

Using Fluent Bit as a log router is a beneficial way to centralize logging across Amazon ECS for both Linux and Windows workloads. Fluent Bit can send the logs to various destination solutions allowing flexibility for customers.