This post shows how to configure a Linux container running on Amazon Elastic Container Service (Amazon ECS) to connect to a SQL Server database using Windows Authentication, without joining the container to the domain. The example will use AWS Fargate to run the containers, but this solution could be deployed onto a different container runtime or control plane with minor modifications. 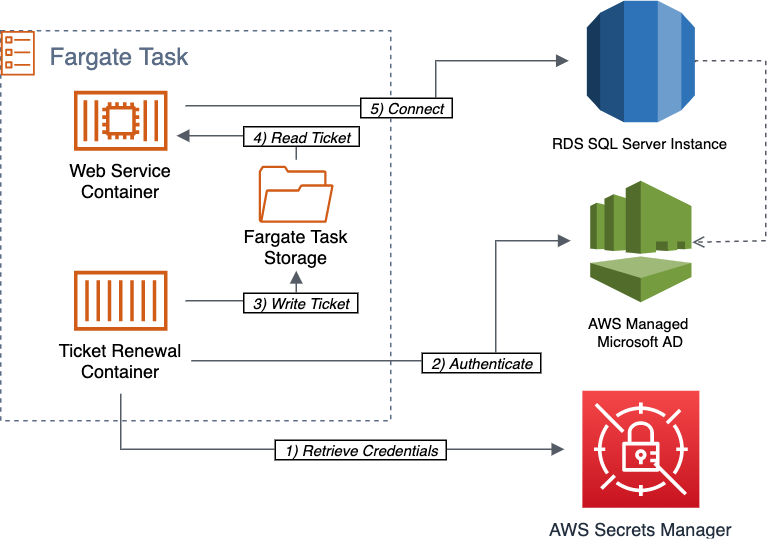 The steps to deploy the solution include:

Code for this solution is available in GitHub.

For this tutorial, you should have the following prerequisites:

Create a directory for the solution. Clone the Git repository at https://github.com/aws-samples/amazon-ecs-windows-authentication-blog into the solution directory.

The solution is composed of two CDK apps: a shared resource app and an app for the website. The dependencies between the CDK apps are minimal. The website app depends on the virtual private cloud (VPC) and ECS cluster created by the shared resources app. This facilitates a microservices architecture where each microservice is defined independently (while sharing an ECS cluster).

The Kerberos ticket renewal sidecar container is located in the solution directory under /kerberos-renewal-sidecar. This container does not have its own CDK app because it is not deployed on its own. Instead, it is incorporated into the website CDK app.

The shared resources script will create a new Active Directory. Open a command prompt in the solution directory, then run the following commands:

(Throughout this tutorial, replace RED TEXT with the appropriate value.) The AWS_ACCOUNT_ID value is your numeric AWS account ID, and the AWS_REGION value is the region identifier that you will deploy resources into, such as us-east-1, eu-west-2, etc.

Copy all of these outputs for future use.

The CDK script created an EC2 instance that you will use to configure the Active Directory. At the moment, this EC2 instance will block your incoming connections because there is no Security Group rule allowing access.

To add a rule to the EC2 instance’s Security Group, you can use the EC2 page in the AWS Management Console, or use the AWS CLI. To use the CLI, you will need to know your IP address; AWS provides a feature that will return it at checkip.amazonaws.com. Run the following commands to get your IP address and update the security group:

The CDK script stored the password for the Active Directory admin user in AWS Secrets Manager. You will need this password in a later step, so run the following command:

The CDK app deployed a DHCP Options Set that uses the Active Directory’s DNS servers for all resources deployed into the VPC. You can verify this in the AWS Management Console, or by running the following commands:

Note the domain-name-servers values, which should match the directory’s DNS address values in the console. 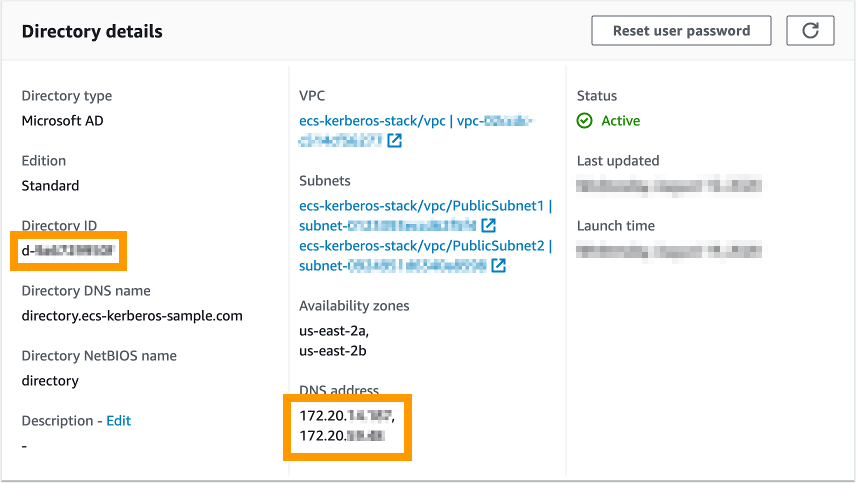 The sample application is composed of two containers and a database. You will deploy the database first, then configure the application code to connect to it.

In the command prompt, run the following commands:

The CDK deployment will output the database instance identifier, instance endpoint address (a host name ending in rds.amazonaws.com), and the Amazon Resource Name (ARN) of the secret containing the database administrator credentials. Copy these values for later use.

To deploy the sample database, you will need the credentials for the database’s administrator user. RDS stores these credentials in the AWS Secrets Manager. You can either retrieve them from the console, or run the following command:

The RDS instance has been deployed in a private subnet, so the database is not accessible from the internet. The first CDK deployment included an EC2 instance that you will use to connect to the RDS instance and deploy a sample database.

Return to EC2 in the console and select the EC2 instance named ecs-kerberos-stack/active-directory-management-instance, then follow these instructions to connect to the instance using Remote Desktop. Use the private key that matches the keyPairName parameter value from the first CDK deployment.

In the Remote Desktop session, download and install the following tools from Microsoft in order:

Run the following PowerShell command to install the sample database. Note that the database password must be in quotes.

Once the tools are installed, run the following command:

You will be prompted for a username and password. Enter admin@directory.ecs-kerberos-sample.com as the username. The password is the Active Directory administrator password that you retrieved from Secrets Manager after you deployed the first CDK stack.

Next, run this PowerShell command to create the Active Directory user that will connect to the database.

Create a secure password for db-user, then run the following PowerShell command:

When prompted, enter the password for the user db-user.

Run the following PowerShell command to enable the user:

Now, you will give db-user access to the RDS database. Run the following PowerShell command to start a SQL prompt on the RDS instance:

When the SQL prompt appears, run the following commands:

Store the db-user credentials in the AWS Secrets Manager by running the following command in the command prompt:

Copy the value of the “ARN” key in the output of this command and store it for use in a future step.

Open the file SOLUTION_DIRECTORY/web-site/krb5.conf in a text editor. This is a standard Kerberos configuration file. You will not make any changes to this file, but it’s important to understand how authorization is configured.

The default_ccache_name setting specifies where Kerberos tickets are stored (in this case, /var/scratch/krbcache). The CDK script creates a volume for the Fargate task and mounts this volume into /var/scratch in both containers, enabling the containers to share this storage.

The kerberos-renewal-sidecar directory also contains a krb5.conf configuration file, with settings that match the web-site configuration.

Open the file SOLUTION_DIRECTORY/web-site/appsettings.Development_AWS.json in a text editor. Replace the string {{RDS_INSTANCE_IDENTIFIER}} with the instance identifier of the RDS instance. The server name in the connection string should end in the name of the directory. If your database instance identifier is foo, the server should be foo.directory.ecs-kerberos-sample.com. It’s important to use this host name, and not the RDS instance endpoint address.

Note that the connection string does not include credentials, instead specifying Integrated Security=true.

Run the following command to create an ECR repository for the website container images:

After creating the repository, go to ECR in the console and click the ecs-kerberos-sample/web-site repository. Click the “View push commands” button and follow the directions to tag and push your image to the ECR repository. 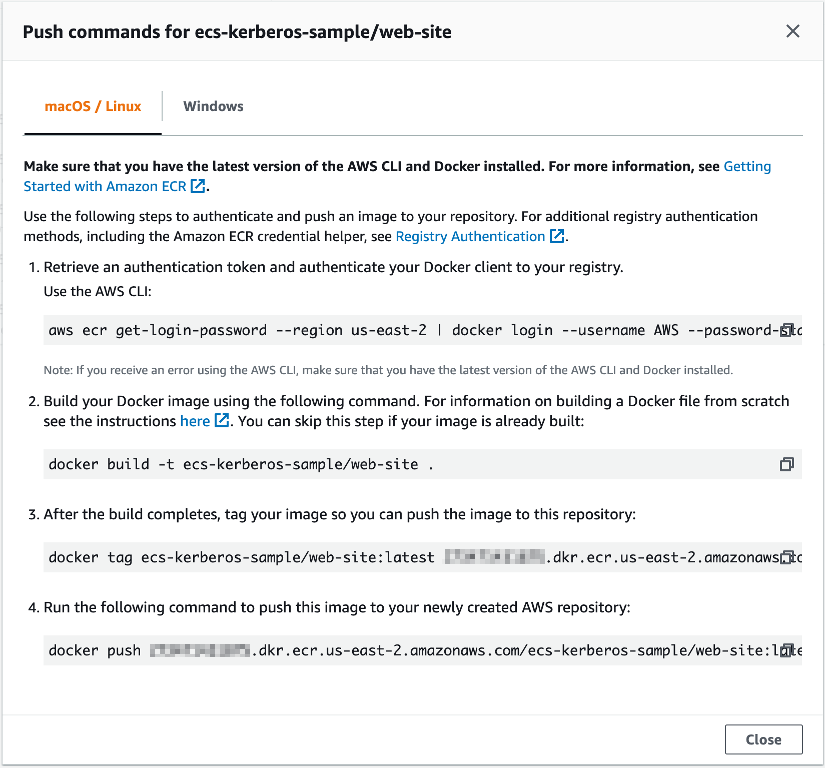 Next, create the Docker image of the Kerberos renewal sidecar container. Run the following commands:

After creating the repository, go to ECR in the console and click the ecs-kerberos-sample/kerberos-renewal-sidecar repository. Click the “View push commands” button and follow the directions to tag and push your image to the ECR repository.

Run the following commands in the command prompt:

To avoid incurring future charges, delete the resources. You can use the cdk destroy command to delete the stacks, in the reverse order you deployed them:

You can also navigate to the CloudFormation page in the console to delete the stacks.

In addition to deleting the stacks, you will need to delete the ECR repositories and the secrets.

In this post, you deployed a containerized workload on Amazon ECS that connects to a SQL Server database using Integrated Authentication, which is the recommended mechanism, without joining individual containers to the domain. The authentication for this solution is based on an AWS Managed Active Directory, which serves as the authentication source.