After the development of the COVID-19 vaccine, Korean Air began transporting vaccines in February, 2021. In the process, Korean Air realized the need to provide more accurate information between related stakeholders in a more reliable way and turned to blockchain technology. Korean Air confirmed that blockchain is suitable for improving traceability, transparency, and accuracy of cargo transportation with supply chain characteristics, so they decided to apply Amazon Managed Blockchain to the vaccine cold chain.

This post shows how Korean Air used Managed Blockchain to build a vaccine cold chain and how this service works.

Since 2021, vaccines have become a more important part of Korean Air’s transport business. However, transporting vaccines is an expensive and complicated process because they are classified as special cargo and are particularly temperature sensitive. In order to service this important business, Korean Air needed a way to provide transportation-related information in an accurate, timely, and reliable manner.

According to the World Health Organization (WHO), 50% of the world’s vaccine shipments are discarded during storage and transportation due to mishandling and inappropriate equipment. It’s important to control the temperature of the entire cycle, from the production site of the vaccine to the time of inoculation, but the transportation container is the most vulnerable. A ULD (Unit Load Device) is a container that can bundle and transport multiple cargoes. A special type of ULD used to transport vaccines is a temperature-controlled container. A temperature sensor is attached to the inside of the temperature-controlled container, which periodically measures the temperature even after the container is onboard an aircraft. By checking this information after it’s unloaded from the aircraft, we can ensure that it was safely transported inside the aircraft. 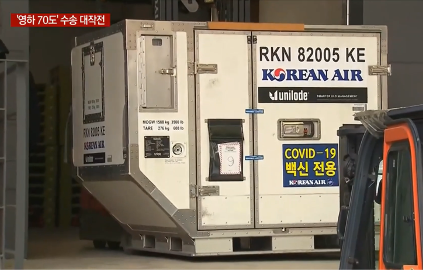 The previous cargo service consisted of a three-level centralized system: a relay network, a cargo system, and a homepage. Forwarders had to enter cargo information such as departure airports and destination airports through relay networks, but some important forwarders directly entered cargo information into the cargo system without going through relay networks. Korean Air, which is in charge of transportation, entered transportation information such as departure time, arrival time, and stopover through the cargo system and these stakeholders checked the cargo information and transportation information through the separate web application. As described previously, it’s important to share temperature history information in real time and verify that there is no forgery or falsification in the entire cold chain distribution process. Since the existing system consists of three centralized systems, the transit network, the cargo system, and the web application, and data is stored and managed separately, it is difficult to ensure data consistency and track change history. As a result, Korean Air evaluated blockchain, and ultimately chose Managed Blockchain Hyperledger Fabric, a private network. The following diagrams compare the previous architecture to the current solution.

First, they needed to think about what data to store on the blockchain. Because blockchain is a relatively expensive storage, it’s important to select and share valuable and reliable information with participants.

Second, they needed to consider who can participate in the blockchain network. A private network must first select members to share data with, and Korean Air, an transport provider, is the first member. Another member is a forwarder, a company that handles the cargo import and export business and provides necessary information such as temperature and import to shippers.

The vaccine cargo service organized its information into three blocks:

Similar to databases, blockchains also require keys for efficient lookup and storage. We decided to use the AWB number as the key to tie these three blocks together. Finally, we had to figure out how to save information so that temperature and inflow information is provided in real-time and historical queries can be completed in a performant manner. For example, since the AWB number is used as the primary key when storing data off-chain, a key is created based on the AWB number to make it easier to search related data in the blockchain.

The flow of the Hyperledger Fabric network setup is as follows:

In the overall structure, the orderer is responsible for creating new blocks, and Fabric CA is the certification authority that manages the roles and privileges of authorized users.

To make the service easily accessible, we wrap the deployed chaincode in an API. In the case of cargo blockchain, a RESTful API was created in the Fabric client on Amazon Elastic Compute Cloud (Amazon EC2), and a webpage was created on AWS Fargate. For security and authentication, Amazon API Gateway and Amazon Cognito were added.

Now, two members, Korean Air and the forwarder, can use the blockchain service through the RESTful API. As a prerequisite, members and users must be participating and registered in the blockchain network. When a user requests a transaction, the peer validates the transaction and returns a signature. The signed transaction is submitted to the orderer. The orderer creates a new block for the transaction and broadcasts it to all the peer nodes. When the new block is recorded on the ledger, it gives a response to the client side. Although the blockchain mechanism may seem complicated, the blockchain provides a decentralized store of information existing in several places simultaneously, making the data difficult to forge.

The final webpage is configured to check each of the three blocks. Even if the backend is configured as a blockchain, the front end uses familiar technology to allow users to access blockchain data through the RESTful API, and mobile applications can be easily implemented.

These are the lessons we learned from our blockchain experience.

First, select a workload that fits well with the characteristics of the blockchain. In addition to understanding the benefits and boundaries of blockchain technology, it’s necessary to consider which stakeholders can participate in the network. Only then, can you find the right business for the blockchain.

Second, understand the mechanism of the blockchain. For developers familiar with existing technologies such as centralized databases, a blockchain structure based on consensus among authenticated participants may feel unfamiliar. The same goes for storage structures (blocks). Depending on your business needs, you need to determine the concept of units called blocks, how they are divided, and how you define composite keys. The blockchain in which these blocks are stored is distributed across the peer nodes of each member, so you should also understand whether user requests are stored and queried on the blockchain.

Third, give careful consideration to who can be members. The biggest advantage of blockchain is that distributed information is shared among each member of the network, so it requires active participation from other companies as well as Korean Air, the main agent of service development.

An important point to remember is that when using Amazon Managed Blockchain, blockchain members must be operating in AWS, so this should be considered before development. If you can increase the understanding of blockchain by participating companies, it will help you establish a more successful blockchain service.

Sun Hi Yang is a Cargo IT team manager at Korean Air with 15 years of experience in logistics. At Korean Air’s IT strategy department, she started her career in the air cargo industry and joined the next-generation cargo system project. Since 2018, she has served as an architect for Korean Air’s all-in migration to AWS. For the past 2 years, she has been working closely with AWS to introduce a cargo blockchain service using AMB.

John Liu has 21 years of experience in fintech as a portfolio manager. At AWS, John helps align AMB product initiatives with customer needs in the rapidly evolving and maturing blockchain industry. He is fully immersed within blockchain, leading product and business development at public protocols with a heavy focus on DeFi and NFT royalty streams. During this time, John helped private organizations and government agencies learn about blockchain technology.

Hye Young Park is a Principle Solutions Architect at AWS. She helps align AMB product initiatives with customer needs in the rapidly evolving and maturing blockchain industry for both private and public blockchains. She is passionate about transforming traditional enterprise IT thinking and pushing the boundaries of conventional technology usage. Before joining AWS, she has experience in search engine, messaging, and big data at Yahoo, Samsung Electronics, and SK Telecom as project manager.

InYoung Choi is a Sr. SA Manager at AWS. He joined AWS in 2017 as a Solutions Architect and helped Korean Air’s three-year All-In on AWS migration from start to finish. He is also interested in blockchain technology, and helped the Korean Air Vaccine Cold Chain project. After completing Korean Air’s All-In cloud migration, he worked as an Executive Technology Partner, providing technical strategy and guidance to enterprise CxOs, and is now a SA manager of the Retail SA team in Korea.