AWS CodePipeline and AWS CodeBuild are the primary AWS services for building CI/CD pipelines. AWS CodeBuild supports a wide range of build scenarios thanks to various built-in Docker images. It also allows you to bring in your own custom image in order to use different tools and environment configurations. However, there are some limitations in using custom images.

The last point is the critical one for microservice type of applications based on Microsoft stacks (.NET Framework, Web API, IIS). The usual workflow for this kind of applications is to build a Docker image, push it to ECR and update ECS / EKS cluster deployment.

The downside of this approach is additional management burden—neither AWS CodeBuild nor AWS CodePipeline support Amazon EC2 instances directly. There are ways to set up a Jenkins build cluster on AWS and integrate it with CodeBuild and CodeDeploy, but these options are too “heavy” for the simple task of building a Docker image.

There is a different way to tackle this problem: AWS CodePipeline provides APIs that allow you to extend a build action though custom actions. This example demonstrates how to add a custom action to offload a build job to an Amazon EC2 instance.

Here is the generic sequence of steps that the custom action performs:

Notice that most of these steps are the same regardless of the actual build job being executed. However, the following parameters will differ between CI/CD pipelines and, therefore, have to be configurable:

Instead, I want to introduce an architecture that enables any Amazon EC2 instance to be a build agent without additional software and configuration required. The architecture diagram looks as follows: 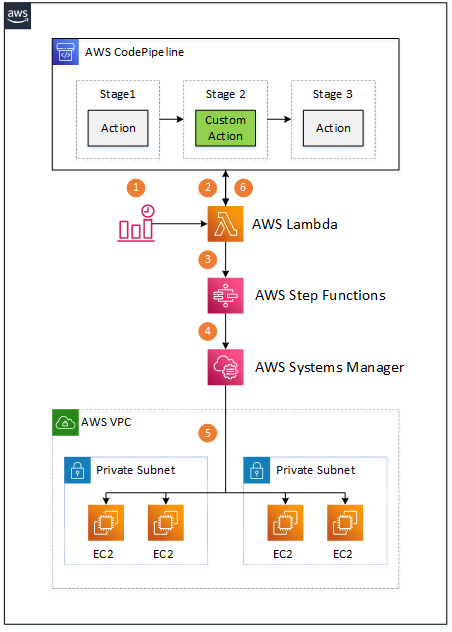 There are multiple components involved:

The whole architecture is serverless and requires no maintenance in terms of software installed on Amazon EC2 instances thanks to the Systems Manager command, which is essential for this solution. All the code, AWS CloudFormation templates, and installation instructions are available on the GitHub project. The following sections provide further details on the mentioned components.

The custom action type is defined as an AWS::CodePipeline::CustomActionType resource as follows:

The custom action type is uniquely identified by Category, Provider name, and Version.

Category defines the stage of the pipeline in which the custom action can be used, such as build, test, or deploy. Check the AWS documentation for the full list of allowed values. 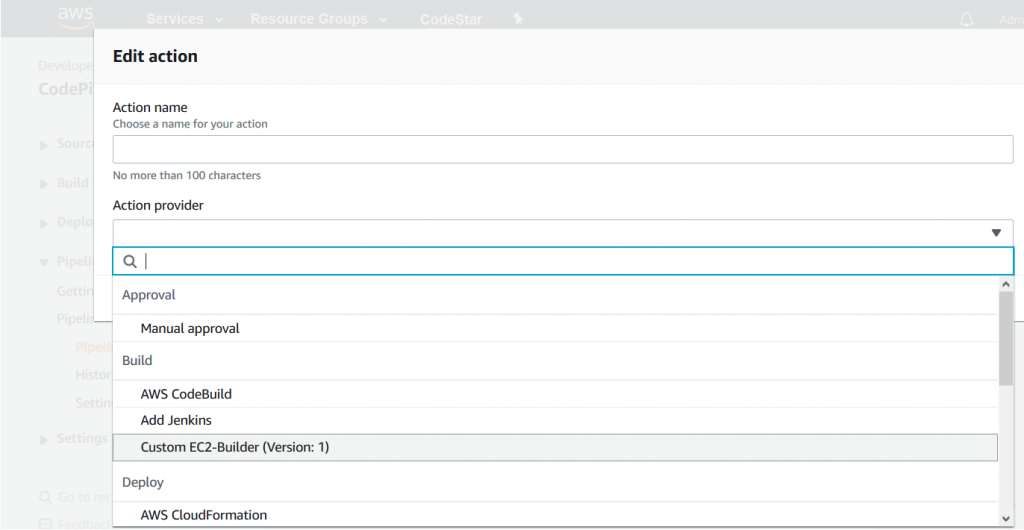 The custom action type also defines a list of user-configurable properties—these are the properties identified above as specific for different CI/CD pipelines:

The properties are configurable in the CodePipeline console, as shown in the following screenshot: 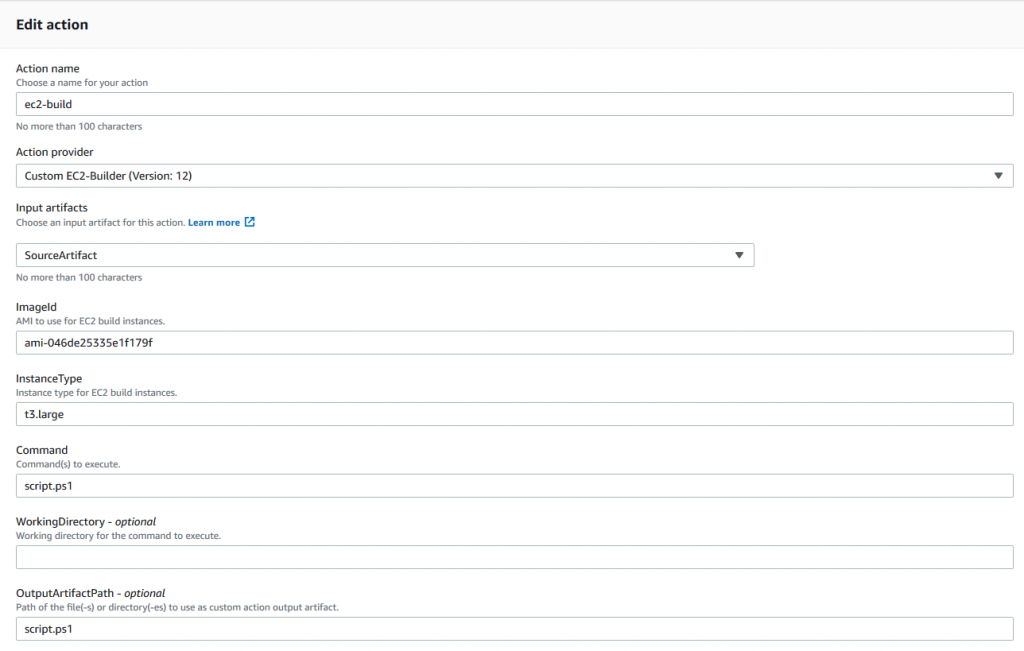 EntityUrlTemplate defines the link to the AWS Systems Manager document that carries over the build actions. The link is visible in AWS CodePipeline console as shown in the following screenshot: 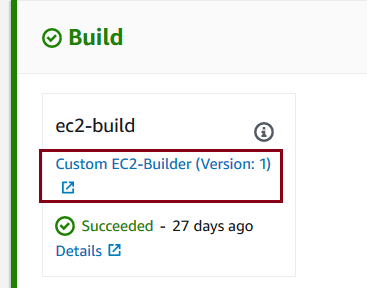 ExecutionUrlTemplate defines the link to additional information related to a specific execution of the custom action. The link is also visible in the CodePipeline console, as shown in the following screenshot: 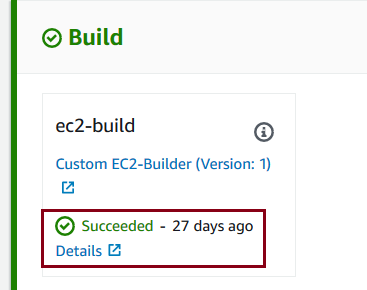 This URL is defined as a link to the Step Functions execution details page, which provides high-level information about the custom build step execution, as shown in the following screenshot:

This page is a convenient visual representation of the custom action execution flow and may be useful for troubleshooting purposes as it gives an immediate access to error messages and logs.

The Lambda function polls CodePipeline for custom actions when it is triggered by the following CloudWatch event:

The event is triggered for every CodePipeline action started, so the Lambda function should verify if, indeed, there is a custom action to be processed.

The rest of the lambda function is trivial and relies on the following APIs to retrieve or update CodePipeline actions and deal with instances of Step Functions state machines:

You can find the complete source of the Lambda function on GitHub.

Note that it is necessary to release the Amazon EC2 instance in case of error or exception during Systems Manager command execution, relying on Fallback States to guarantee that.

You can find the complete definition of the Step Function state machine on GitHub.

The preceding steps are operating-system agnostic, and both Linux and Windows instances are supported. The following code snippet shows the Windows-specific steps.

You can find the complete definition of the Systems Manager document on GitHub.

Once you have a custom action that offloads the build job to the Amazon EC2 instance, you may approach the problem stated at the beginning of this blog post: how to build and publish Windows Server containers on AWS.

With the custom action installed, the solution is quite straightforward. To build a Windows Server container image, you need to provide the value for Windows Server with Containers AMI, the instance type to use, and the command line to execute, as shown in the following screenshot: 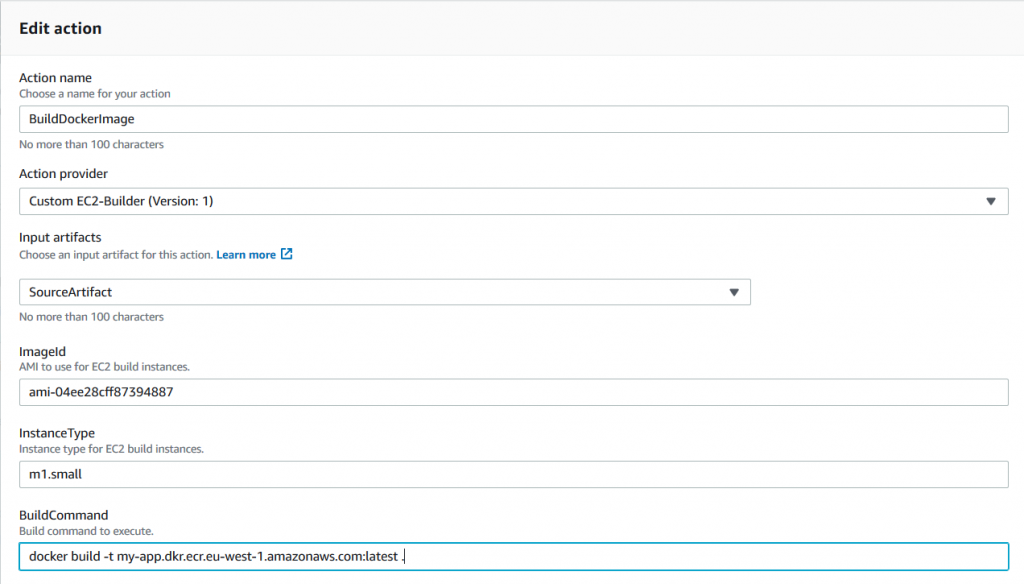 This example executes the Docker build command on a Windows instance with the specified AMI and instance type, using the provided source artifact. In real life, you may want to keep the build script along with the source code and push the built image to a container registry. The following is a PowerShell script example that not only produces a Docker image but also pushes it to AWS ECR:

You can find a complete example of the pipeline that produces the Windows Server container image and pushes it to Amazon ECR on GitHub.

There are a few ways to get Amazon EC2 instances for custom build actions. Let’s take a look at a couple of them below.

This is a reasonable default strategy that is implemented in this GitHub project. Each time the pipeline needs to process a custom action, you start a new Amazon EC2 instance, carry out the build job, and terminate the instance afterwards.

This approach is easy to implement. It works well for scenarios in which you don’t have many builds and/or builds take some time to complete (tens of minutes). In this case, the time required to provision an instance is amortized. Conversely, if the builds are fast, instance provisioning time could be actually longer than the time required to carry out the build job.

Use a pool of running Amazon EC2 instances

There are cases when it is required to keep builder instances “warm”, either due to complex initialization or merely to reduce the build duration. To support this scenario, you could maintain a pool of always-running instances. The “acquisition” phase takes a warm instance from the pool and the “release” phase returns it back without terminating or stopping the instance. A DynamoDB table can be used as a registry to keep track of “busy” instances and provide waiting or scaling capabilities to handle high demand.

This approach works well for scenarios in which there are many builds and demand is predictable (e.g. during work hours).

Use a pool of stopped Amazon EC2 instances

This is an interesting approach, especially for Windows builds. All AWS Windows AMIs are generalized using a sysprep tool. The important implication of this is that the first start time for Windows EC2 instances is quite long: it could easily take more than 5 minutes. This is generally unacceptable for short-living build jobs (if your build takes just a minute, it is annoying to wait 5 minutes to start the instance).

Interestingly, once the Windows instance is initialized, subsequent starts take less than a minute. To utilize this, you could create a pool of initialized and stopped Amazon EC2 instances. In this case, for the acquisition phase, you start the instance, and when you need to release it, you stop or hibernate it.

The downside is that you reuse the same Amazon EC2 instance between the builds—it is not completely clean environment. Build jobs have to be designed to expect the presence of artifacts from the previous executions on the build instance.

Another variation of the previous strategies is to use Amazon EC2 Fleet to make use of cost-efficient spot instances for your build jobs.

Note that since spot instances could be terminated at any time, the Step Functions workflow has to support Amazon EC2 instance termination and restart the build on a different instance transparently for CodePipeline.

The following are a few final thoughts.

The default maximum execution time for CodePipeline custom actions is 24 hours. If your build jobs require more than that, you need to request a limit increase for custom actions.

Custom Amazon EC2 instances could be even more cost effective than CodeBuild for many scenarios. However, it is difficult to compare the total cost of ownership of a custom-built fleet with CodeBuild. CodeBuild is a fully managed build service and you pay for each minute of using the service. In contrast, with Amazon EC2 instances you pay for the instance either per hour or per second (depending on instance type and operating system), EBS volumes, Lambda, and Step Functions. Please use the AWS Simple Monthly Calculator to get the total cost of your projected build solution.

If you are running the above steps as a part of workshop / testing, then you may delete the resources to avoid any further charges to be incurred. All resources are deployed as part of CloudFormation stack, so go to the Services, CloudFormation, select the specific stack and click delete to remove the stack.

The CodePipeline custom action is a simple way to utilize Amazon EC2 instances for your build jobs and address a number of CodePipeline limitations.

With AWS CloudFormation template available on GitHub you can import the CodePipeline custom action with a simple Start/Terminate instance strategy into your account and start using the custom action in your pipelines right away.

The CodePipeline custom action with a simple Start/Terminate instance strategy is available on GitHub as an AWS CloudFormation stack. You could import the stack to your account and start using the custom action in your pipelines right away.

An example of the pipeline that produces Windows Server containers and pushes them to Amazon ECR can also be found on GitHub.

I invite you to clone the repositories to play with the custom action, and to make any changes to the action definition, Lambda functions, or Step Functions flow.

Feel free to ask any questions or comments below, or file issues or PRs on GitHub to continue the discussion.