Notifications are an important part of DevOps workflows. Although you can set them up from any stage in the CI or CD pipelines, in this blog post, I will show you how to integrate AWS Lambda and Amazon SNS to extend AWS CodeCommit. Specifically, the solution described in this post makes it possible for you to receive detailed notifications from Amazon SNS about file changes and commit messages when an update is pushed to AWS CodeCommit.

Amazon SNS is a flexible, fully managed notifications service. It coordinates the delivery of messages to receivers. With Amazon SNS, you can fan out messages to a large number of subscribers, including distributed systems and services, and mobile devices. It is easy to set up, operate, and reliably send notifications to all your endpoints – at any scale.

AWS Lambda is our popular serverless service that lets you run code without provisioning or managing servers. In the example used in this post, I use a Lambda function to publish a topic through Amazon SNS to get an update notification.

To help you quickly deploy the solution, I have created an AWS CloudFormation template. AWS CloudFormation is a management tool that provides a common language to describe and provision all of the infrastructure resources in AWS.

The following diagram shows how to use AWS services to receive the CodeCommit file change event and details.

When this Lambda function is triggered, the following steps are executed:

I’ve used Python and Boto 3 to implement this function. The full source code has been published on GitHub. You can find the example in aws-codecommit-file-change-publisher repository.

There is an AWS CloudFormation template, codecommit-sns-publisher.yml, in the source code. This template uses the AWS Serverless Application Model to define required components of the CodeCommit notification serverless application in simple and clean syntax.

The template is translated to an AWS CloudFormation stack and deploys an SNS topic, CloudWatch event rule, and Lambda function. The Lambda function code already demonstrates a simple notification use case. You can use the sample code to define your own logic and extend the function by using other APIs provided in the AWS SDK for Python (Boto3).

To deploy the AWS CloudFormation template and Lambda function

2. Sign in to the AWS Management Console and choose the AWS Region where your CodeCommit repository is located. Create an S3 bucket and then upload the AWS Lambda deployment package, codecommit-sns-publisher.zip, to it. For information, see How Do I Create an S3 Bucket? in the Amazon S3 Console User Guide.

3. Upload the Lambda deployment package to the S3 bucket.

In this example, I created an S3 bucket named codecommit-sns-publisher in the Ohio (us-east-2) Region and uploaded the deployment package from the Amazon S3 console.

4. In the AWS Management Console, choose CloudFormation. You can also open the AWS CloudFormation console directly at https://console.aws.amazon.com/cloudformation.

6. On the Select Template page, choose Upload a template to Amazon S3, and then choose the codecommit-sns-publisher.yml template.

9. On the Review page, under Capabilities, choose the following options:

10. Under Transforms, choose Create Change Set. AWS CloudFormation starts to perform the template transformation and then creates a change set.

11. After the transformation, choose Execute to create the AWS CloudFormation stack. 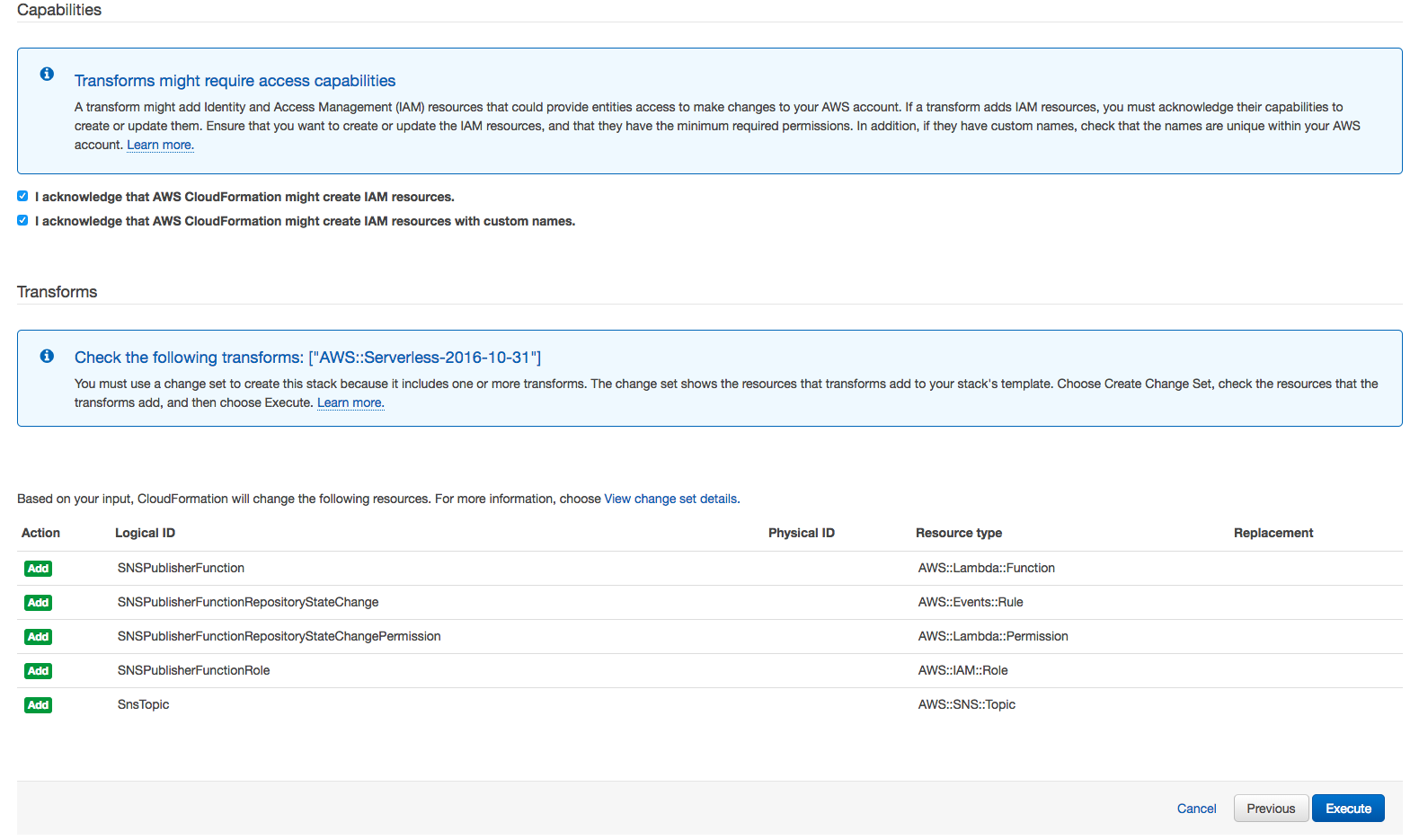 After the stack has been created, you should receive an SNS subscription confirmation in your email account:

After you subscribe to the SNS topic, you can go to the AWS CloudFormation console and check the created AWS resources. If you would like to monitor the Lambda function, choose Resource to open the SNSPublisherFunction Lambda function.

Now, you can try to push a commit to the remote AWS CodeCommit repository.

1. Clone the CodeCommit repository to your local computer. For information, see Connect to an AWS CodeCommit Repository in the AWS CodeCommit User Guide. The following example shows how to clone a repository named sample-repo in the US East (Ohio) Region:

2. Enter the folder and create a plain text file:

3. Add and commit this file change:

Look for this output:

4. Push the commit to the remote CodeCommit repository:

Look for this output:

After the local commit has been pushed to the remote CodeCommit repository, the CloudWatch event detects this update. You should see the following notification message in your email account:

In this blog post, I showed you how to use an AWS CloudFormation template to quickly build a sample solution that can help your operations team or development team track updates to a CodeCommit repository.

The example CloudFormation template and Lambda function can be found in the aws-codecommit-file-change-publisher GitHub repository. Using the sample code, you can customize the email content with HTML or add other information to your email message.

If you have questions or other feedback about this example, please open an issue or submit a pull request.