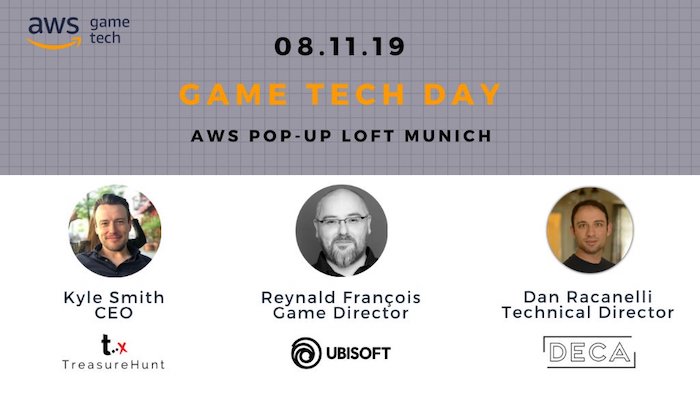 The AWS Lofts are a place where like-minded developers can meet, share knowledge, attend educational sessions, and get in-person answers to AWS technical questions.

At the recent AWS Pop Up Loft in Munich, we held a day dedicated to game tech. Here we sat down with TreasureHunt, DECA Games, and Ubisoft Berlin who gave us a unique perspective into how they approach releasing and operating successful games.

Kyle Smith is the co-founder and CEO of TreasureHunt, a Berlin-based mobile games company. Having built the studio from the ground up, we were interested in hearing Kyle’s perspective on what he looks for when deciding when to launch a game, versus when to kill-off a project?

“I think it helps if you just look at what’s in front of you, because it’s so bespoke with every game. For instance, if you have retention issues, then your game probably sucks fundamentally and you need to think; can I fix the core gameplay in this or should I just kill it and work on another game? If your retention is awesome but you’re not monetizing, those are easier problems to fix. Identifying where the big problems are and making fairly dispassionate decisions as quickly as possible becomes really critical.”

Specific to what data points, Kyle mentions trying to gather as much intelligence as possible – not just KPI’s from the game, but the whole story to be able to make more informed decisions. “This industry moves at lightning speed, so there’s a need to be constantly re-analyzing the market every quarter to understand what’s going on. Talking to the players, which you can do through multiple surveys, focus groups, online play tests, and then lastly, your team, who are smart, committed people who’ve done this before and then try and bring all those data points together. One example: I love play testing, it’s my favourite thing to do, watching someone play your game. It can be agonising and physically painful, but there are things you can get out of the experience that will never show up in your game KPIs (which are also incredibly important). When we were testing Pet Paradise early on before we had even launched it, we had one lady with fairly long fingernails and her feedback was “oh, the buttons on the game are too small, especially the ‘close’ button”. A KPI will never, ever tell you that.”

For Dan Racanelli, Technical Director at DECA Games, the challenge is different. DECA’s strategy involves taking games that have existing communities, games that people play and enjoy, but need an injection of adrenalin to take them to the next level. We asked Dan what signals he and his team look for to decide whether a game is the right kind of acquisition target for them?

“DECA acquires games that are in the tail end of their lifespan at between 5 to 10 years old, which continue to be successful and have their own dedicated communities. We acquire these games, make a big announcement to the player base and take their feedback in terms of bug fixes, feature improvements and how they’d like to see the game evolve,” says Racanelli.

“The company is incredibly dedicated to these user bases, but the first decisions are always business decisions. Historically, the founder and our business development director have sought out games that we know perform very well month-over-month, or year-over-year, without a lot of attention needed. The data is there, and you can see how these games perform. In our case, those are the ones we’ve been targeting, and if we have some success there, it eventually gets kicked over the fence to me. From a business perspective, we believe the project could be viable. Then depending on if it’s a small project, it’s up to me to analyze the tech stack from top to bottom and ask various question such as; is this maintainable and sustainable for a part-time team, or a minimal team in terms of engineering and QA, customer support, and community management, because at DECA, every game will get that sort of consideration from the get-go.”

Dan continued, “when it’s a bigger project like the one I was initially brought in to work on at DECA that spans multiple games, we have 20 people working full-time so that each of those user communities are getting what they need. In the industry, we approach things with good intentions when we’re trying to give users what they want, and then there’s a balancing act that happens and sometimes it doesn’t always work out. In DECA’s case, I was delighted to experience that for example, the three different user communities all made different decisions about what matchmaking changes they wanted across these three games, so as frustrating as that was technically, we didn’t go in there and say ‘this is the matchmaking you need’. We negotiate with the players, and where they aren’t sure about a set of changes, they negotiate for test events. So effectively DECA foregoes revenue for a weekend to make sure they’re happy with it, and then we proceed from there.”

DECA have an acute attention to player engagement, “These are static user communities, where we have a couple hundred thousand users of the games, so the games have influencers and it’s important to pay attention to what they need” says Racanelli. “That’s the difference on our end. Of course it’s a business decision, but then from a customer relationship management perspective all the way down to the tech stack, we’re thinking ‘are we going to be able to absorb all that and keep DECA as limber as it is?’”.

Having covered building a studio from scratch, and cultivating a community to treat games as a service, then what about the approach of an established AAA studio? Ubisoft is a truly independent large-scale games publisher with a global reach. As Games Director at Ubisoft Berlin, Reynald Francois maintains the studio’s vision for gameplay and the design side of their titles. We asked him how they maintain a culture of scrappiness, innovation, and creativity at the individual studio level, while still taking advantage of the resources a big company has access to.

“It’s a good question. When you say we’re big, we have about 40-something studios across the globe with about 17,000 employees. 14,000 of those work on the game development side, which probably makes it the single biggest games workforce in the industry,” says Francois.

“When we opened the Berlin studio in Germany for instance, we were expecting to get people from mainly around the region, perhaps from neighbouring Eastern Europe. As it turns out only about 30% of the people we’ve employed comes from these areas, and then everyone else comes from just about everywhere. So that means when we talk about culture, we’re actually talking about studio culture. The studios have a certain amount of agility. The way the Group works is by providing editorial guidelines for the studios, and then the studios basically decide how they want to interpret that and how they’re going to converge the specificities of the local culture,” he continued.

Reynald talks about how the founders of the company are still the actual directors running it: “The CEO, CCO, and CFO are all the people that make the company what it is. They believe that the value is in the people and truly believe that if we don’t manage to keep our people, we’ll eventually run into a wall. So when we create our brands, that means they’re prepared to take a hit once in a while when things don’t come out quite as expected. They let people do things a bit outside of the beaten path – for example, recently some guy in France came forward to say ‘I have this really awesome story about my grandfather who died in the first world war and I want to make a game about it’. And the company says ‘sure, do it buddy’. We make them. All those things come out, they get the tech support, and while they’re not the biggest commercial breakthrough we have as a company, we still make them because our teams are telling us they want to make them. The company as a whole really encourages people to express themselves creatively, which makes all the difference.”

Did you miss the Game Tech Day at the AWS Pop Up Loft in Munich? You can catch up on all the sessions by visiting the AWS resource hub.

Learn how you can build, operate, and differentiate amazing games by visiting the game tech homepage.