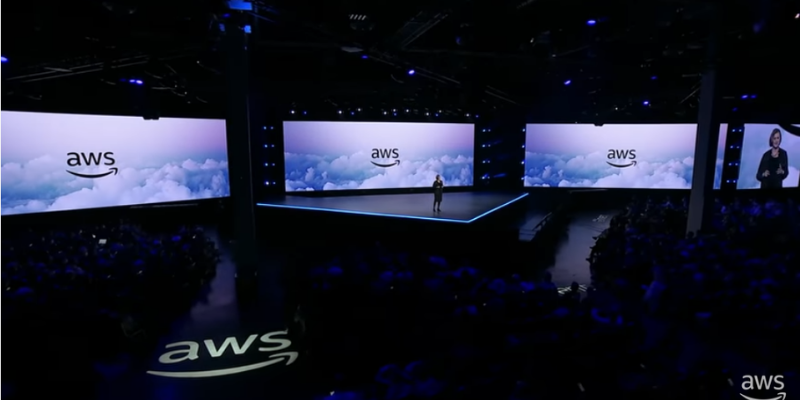 Amazon Web Services (AWS) celebrated 10 years of AWS re:Invent. During that time, many customers have taken the re:Invent stage to share their stories and details of exciting innovations. To mark the occasion, here’s a look back at 10 memorable moments from a decade of re:Invent and what this year’s customer keynote speakers shared on the main stage:

Capital One (re:Invent 2015)
At re:Invent 2015, Rob Alexander, CIO for Capital One, discussed the company’s plan to use AWS for its critical applications and to move away from its data centers. In November 2020, the company announced it had completed its transition to the AWS cloud, becoming the first U.S. bank to report that it has exited legacy data centers and gone all-in on the public cloud. “We’re either using or experimenting with nearly every AWS service,” said Alexander. On its journey, Capital One scaled its tech team to 11,000 members to build innovative customer experiences using AWS services and built 80 percent of the nearly 2,000 applications it now runs in the cloud from the ground up. The company has also cut disaster recovery time by 70 percent in tests and reduced the average development environment build time from 3 months to minutes.

NASA JPL (re:Invent 2016)
At re:Invent 2016, National Aeronautics and Space Administration (NASA) Jet Propulsion Laboratory (JPL), discussed how the organization uses AWS to find answers to big questions like how we can protect the planet, whether we are alone in the universe, and whether there is life on Mars. JPL’s primary function is the construction and operation of planetary robotic spacecraft, and it also conducts Earth-orbit and astronomy missions. The Deep Space Network (DSN) is operated by NASA JPL, which also operates many of the agency’s interplanetary robotic space missions.

Siemens (re:Invent 2017)
Siemens first appeared at re:Invent 2017, where Steve Bashada, executive vice president and general manager at Siemens Digital Industries Software (DI SW), demonstrated how Siemens used AWS to help improve its business and how it follows an AWS-first strategy to power its MindSphere industrial Internet of Things (IoT) solution. “We use . . . 40-plus AWS services,” said Bashada. “That’s a very in-depth use.” Our work with Siemens continues to grow since then, and this year’s re:Invent, Siemens supported the AWS IoT TwinMaker launch, and announced an expanded collaboration with AWS to facilitate cloud-based digital transformation. With their expertise in Operation Technology (OT), and AWS leading expertise in the IT space, Siemens and AWS will make it easier for industrial customers to use Siemens’ comprehensive industrial software and AWS to deliver new manufacturing insights, automation, and connected services. Together, we’ll bring OT and IT teams together to implement new cloud-based digital transformation solutions that will help companies of any size address industrial complexity and turn it into competitive advantage.

Epic Games (re:Invent 2018)
Epic Games (Epic) might be best known as the creator of games like Fortnite, but at re:Invent 2018, Chris Dyl, director of platform at Epic, discussed the company’s elasticity, analytics, and Unreal Engine—a suite of tools that developers use for creating interactive experiences in 3D game genres and other industries, including film and television. Epic has used AWS analytics solutions, such as a 35 PB data lake that ingests over 125 million events per minute, to power Fortnite and Unreal Engine, using the resulting insights to power business outcomes and increase player engagement. “We’re heavily reliant on AWS now,” said Dyl. “It’s become a critical part of our operations.”

GE (re:Invent 2018)
Keith Bigelow, general manager and senior vice president of GE Healthcare, announced at re:Invent 2018 that the global medical technology company is all in on Amazon SageMaker, a fully managed ML service. GE Healthcare provides a broad portfolio of products, solutions, and services used in the diagnosis, treatment, and monitoring of patients and in biopharmaceutical development and manufacturing. “We’re not here to build one algorithm,” said Bigelow. “We’re building thousands of algorithms. And in order to do that, we need to ingest petabytes of data, and we need to store it compliantly.” The company is using Amazon SageMaker to build, train, and deploy ML models that help healthcare providers identify health issues around the world. Using algorithms, artificial intelligence (AI) can help providers detect a critical condition, localize the condition on a scan, and quantify the severity of the condition.

BP (re:Invent 2019)
Global energy business BP is using advanced technologies from AWS to develop new ways to tackle emissions, improve its products, and create new low-carbon businesses. At re:Invent 2019, Stewart Fry, vice president and chief information officer of BP, detailed BP’s shift to a cloud-first organization. The company has migrated 32 production SAP environments to AWS including a 16TB strategic global fuels instance. A migrated refinery optimization product was also modernized, which now runs calculations in 4 minutes instead of 7 hours. BP also made a big announcement: “Today, we’re pleased to be able to announce that we’re going all in [on] AWS to support the exit from our two European mega data centers,” said Fry.

Volkswagen (re:Invent 2019)
Volkswagen Group (Volkswagen) operates at a massive global scale, manufacturing some 11 million cars—from brands such as Volkswagen, Audi, and Porsche—per year and bringing 200 million parts per day into its factories. During re:Invent 2019, Dr. Martin Hofmann, group chief information officer of Volkswagen, discussed using AWS to move 124 factory sites to a single architecture: the Volkswagen Industrial Cloud. “The implementation speed that we are getting from AWS methodologies, the flexibility, and the culture [are] helping us to really accelerate this project,” said Hofmann. The company uses AWS ML services—running algorithms using information from shop floor sensors—and AWS Outposts, a fully managed service that offers the same AWS infrastructure, services, APIs, and functionality to virtually any data center, collocation space, or on-premises facility for a consistent hybrid experience.

Philips (re:Invent 2020)
Philips, a health technology company that aims to improve 2.5 billion lives per year by 2030, uses AWS for its HealthSuite digital solution. HealthSuite securely consolidates information from patient records, wearables, home-based remote monitoring equipment, insurance companies, and healthcare organizations. At re:Invent 2020, Elad Benjamin, general manager of radiology informatics for Philips, described how the company is using AWS to increase its use of AI and data science to extract new knowledge from health data. “The unlocking of big data using ML and AI tools will support the fundamental shift from volume- to value-based care and to a precise diagnosis for each patient,” said Benjamin.

Netflix (re:Invent 2020)
Data science at Netflix goes far beyond eponymous recommendation systems and touches every aspect of the business, from optimizing content delivery to fighting fraud. Netflix’s unique culture affords its data scientists extraordinary freedom of choice in tools, which results in an ever-expanding set of machine learning (ML) approaches and systems. In 2019, Netflix open-sourced Metaflow, its human-centric ML platform, designed to leverage the strengths of AWS: elastic compute; high-throughput storage; and dynamic, scalable notebooks. “We at Netflix are extremely pragmatic…when we know that Amazon can provide something it doesn’t really make sense often times for us to do it by ourselves…we want to rely on AWS when it comes to scalability and when it comes to storage back-end.”

Over the past 10 years, each of these customers dared to do something different using the cloud. Now there are millions of customers in every industry, across every use case, and around the world running their mission-critical applications on AWS. The cloud has become not just another tech revolution, but an enabler of a fundamental shift in how businesses function. At this year’s 2021 re:Invent, AWS customers took the stage to share their recent advances, transformations, and innovations. Watch some of this year’s pathfinding customers who joined Adam Selipsky, CEO at AWS, during his keynote including United Airlines, DISH, 3M, and Nasdaq.

Congratulations, re:Invent—what a decade it has been!