Embedded software developers in the automotive industry have used a traditional embedded development methodology that has been largely unchanged for decades. The embedded target system that the software is being written for is by nature resource constrained with limited memory, compute, and input/output capacity. Additionally, embedded development systems are often expensive and a scarce commodity for development teams working on brand new electronic control units (ECUs) and system-on-chip (SoC) architectures. This scarcity has become further apparent with the recent global chip shortages in the automotive industry.

This means software developers avoid developing software directly on the embedded platform itself and instead rely on developing software on a powerful development machine or host. Compilers and toolchains used to create executable software for development and testing on the host machine cannot be used directly for deployment on the embedded target. Many times, the target-embedded operating system (OS) itself cannot be used on the host machine. Developers rely on cumbersome OS emulation tools on their host machine and the process of cross-compiling, which uses a special compiler to create executable code for the target system. Once that code is on the development system, a final integration and validation testing can be performed, but scaling is limited to the number of physical hardware platforms. Typical development, integration, and validation workflows for embedded systems look like the following today: 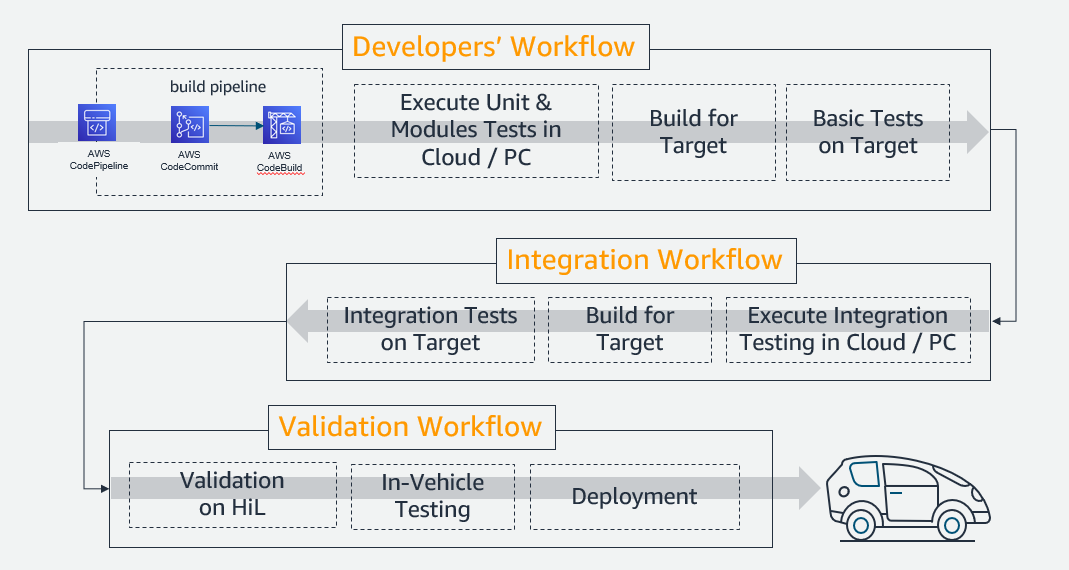 This blog will introduce a building block toward a novel automotive-software development concept that helps developers create, test, and debug natively compiled software using the cloud, greatly simplifying this workflow. This concept is often referred to as environmental parity, which you can learn more about in this whitepaper from Arm and Amazon Web Services (AWS), as well as in Kevin Hoffman’s book, Beyond the Twelve-Factor App.

“The purpose of…environment parity is to give your team and your entire organization the confidence that the application will work everywhere.” —Kevin Hoffman

Environmental parity is a major element in achieving the objective of cloud-native-software-defined vehicles.

Arm technology is defining the future of computing. Arm’s energy-efficient processor designs and software platforms have enabled advanced computing in more than 225 billion chips and our technologies securely power products from the sensor to the smartphone and the supercomputer. Together with 1,000+ technology partners, we are enabling artificial intelligence to work everywhere, and in cybersecurity, we are delivering the foundation for trust in the digital world – from chip to cloud. Arm architectures are the most diffused inside modern vehicles, from infotainment units to body control, and much more, including very delicate functional safety related compute workloads.

In 2021 Arm, AWS, and other founding members announced the Scalable Open Architecture for Embedded Edge (SOAFEE) Special Interest Group, which brings together automakers, semiconductor, and cloud technology leaders to define a new open-standards based architecture to implement the lowest levels of a software-defined vehicle stack. It delivers a reference implementation that enables cloud-native technologies like microservices, container, and orchestration systems to be combined with automotive functional safety for the first time, preserving environmental parity.

ISA Parity from Cloud to Embedded Edge with SOAFEE

AWS and Arm have a long history. This includes the use of 64-bit processor inside AWS custom-built SoCs that are used in AWS Graviton processors, which deliver optimal price performance for cloud workloads. By having these processor options on an increasing number of instance types, automotive developers can develop and run cloud-native applications and toolchains using the same Arm intellectual property (IP) and tools that are also used in embedded automotive platforms such as the AVA Developer Platform from ADLINK, an AWS Partner.

By using this IP in the cloud and the edge, developers can achieve the first level of environmental parity at the instruction set architecture (ISA) level. However, to achieve even higher levels of parity, we will need an OS, abstraction layer, and orchestration layers that are automotive grade, which SOAFEE is working to support. The below diagram shows different levels of parity and developer personas associated with those approaches.

Achieving such levels of parity will facilitate completely new workflows for the development and validation of embedded software, as we will explain in the next sections.

As a reference OS to demonstrate the concepts explained in this blog post, we will create a custom Linux distribution using the Yocto Project, an open-source collaboration project that helps developers create custom Linux-based systems regardless of the hardware. It is used by many embedded projects, including the Automotive Grade Linux initiative that is part of the Linux Foundation as well as the SOAFEE reference implementation.

To enable OS-level parity, Arm and AWS collaborated to create an Amazon Machine Image (AMI) for Graviton instances, based on the Yocto Project. An AMI is a template that contains a software configuration, including OS and application software. That can be used to launch an Amazon EC2 instance, which is a copy of the AMI running as a virtual server in the cloud. The developed AMI also includes Arm’s Edge Workload Abstraction and Orchestration Layer (EWAOL), an open-source reference implementation of the SOAFEE architecture, which facilitates further application, container, and OS environmental parity.

EWAOL provides a standards-based framework that uses containers for the deployment and orchestration of embedded applications. This approach helps developers to start writing and testing code in the cloud, significantly improving and scaling the workflow. More specifically, SOAFEE facilitates

Visit the Arm GitLab for more information on EWAOL.

Now that we’ve introduced the concept of OS-level and ISA-level parity, we can now modify the embedded developers’ workflow to cut many of the steps that are now no longer required as shown in the below diagram: 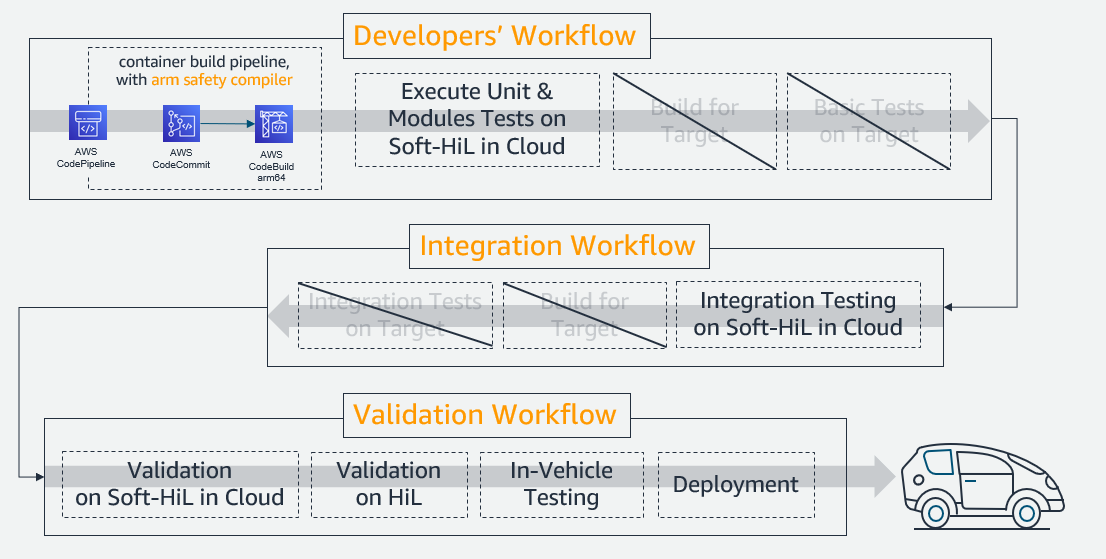 For the remainder of this blog post, we will present a tutorial detailing how to create your own custom Linux-based AMI for AWS Graviton–based instances using the Yocto Project. The tutorial is not intended just to teach how to deploy an already-created AMI on AWS but to provide developers with a methodology to bring their own Linux images used for embedded systems to the cloud.

This guide will describe how to create a custom Linux AMI that can be used to launch an Amazon EC2 instance. It is expected that you will already have access to an AWS account with appropriate permissions to create the resources required. If not, create/activate an account.

Before getting started, please review the detailed instructions available on GitHub. This repository contains the latest information and instructions on how to create a custom Linux AMI including EWAOL.

There are five main steps to creating a custom AMI with Yocto. We will go through them step by step and build out the architecture that is shown below: 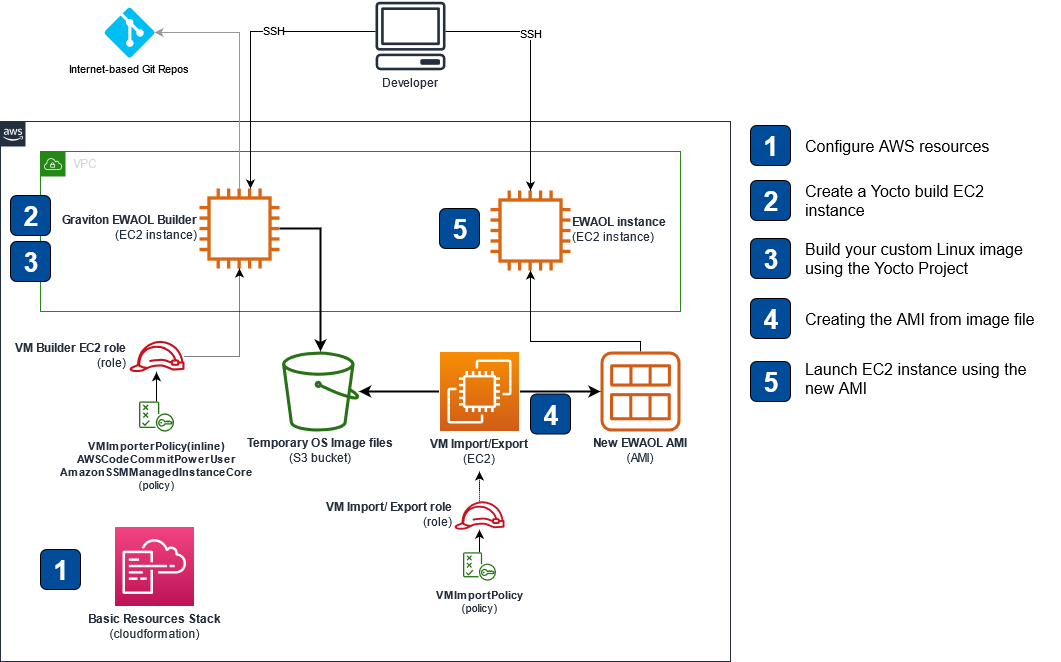 We’ll now create and Secure Shell (SSH) into an Amazon EC2 instance that will be used as our development environment for the compilation and building of our custom Linux image using the Yocto Project.

Next, you should SSH into the build instance that was created in step 2. You can use any SSH client you would like to connect to this instance.

This YAML file describes to kas how Yocto Project should construct our Linux image.

This section tells kas which version of the file schema we are using, along with some other YAML files to include from the EWAOL repo (explained later). These included files load in the base configuration of EWAOL and some standard Arm machine definitions.

This section tells kas which Yocto layers we want to use, where to download them, which versions to use, and where to store them. In this example, we are using meta-ewaol, the reference SOAFEE implementation layer, and aws-meta, which provides recipes for AWS edge software capabilities. In the header, “ewaol-base.yml” was included, and it contains many more repositories. This file also loads in ‘poky’ and ‘meta-openembedded,’ which are the standard Yocto layers. In addition, the meta-ewaol-ext layer adds customizations to the cloud-init and the OpenSSH recipes by using patches and bbappend files.

This line tells Yocto which machine we want to target our image for. In this example ‘generic-arm64’ is used. It creates an image that can boot on most Arm devices that support a generic boot mechanism (UEFI in this case. You will see this set for the AMI image later.).

This section configures custom config settings specific for this example:

This tells Yocto which target images to build. In this case, we only want it to build the docker image (not the podman image).

To configure Yocto to work on AWS Graviton2 processors, a few additional kernel configurations must be activated. They are included in gravitonKernelConfigs.cfg.

4. Creating the AMI from image file

Launching an instance using your newly created AMI is like setting up the EC2 instance earlier in this guide.

Congrats! You now have been able to build and launch your own custom Linux image using the Yocto Project that now can be used in the cloud for development as well as verification and validation.

If you encounter any issues with your custom images, you can access the instances serial console to debug. This is not activated by default. Details can be found here: https://docs.aws.amazon.com/AWSEC2/latest/UserGuide/ec2-serial-console.html

The future of automotive is software defined

In this blog, we have covered the high-level concept of environmental parity and what Arm, AWS, and other partners are working toward: building out a software-defined system and accelerating automotive software development. We also provided a tutorial on how you can create a custom AMI using the Yocto Project for your own development workflow using Arm-based AWS Graviton processors.

If you would like to go deeper into this concept, visit this hands-on workshop detailing how to create an automated software development pipeline for automotive development using the AMI created in this blog and demonstrating environmental parity.