Deploying Magma on AWS Cloud: In Region, On Premises, and at Edge

Mobile core networks have been growing rapidly in transformation of many industries and enterprises such as manufacturing, healthcare, agriculture, and education, just to name a few. Customers’ needs for business agility, low operation costs, enterprise connectivity, and remote connectivity have recently led to open source and cloud-based agile mobile core networks.

Magma meets the customers’ needs by providing a cloud-native solution for building, deploying, and operating mobile core networks. It supports diverse radio technologies, including LTE, 5G, and WiFi for uses such as private networks, fixed wireless access, and mobile edge computing. It is particularly relevant for extending network access into remote and sparsely populated areas.

Magma is produced by an open-source software community and is governed by a neutral governance framework under the Linux Foundation.

Today, the Magma solution is being deployed in production. For example, AccessParks, a broadband provider to the US National Park Service, has signed up FreedomFi to deploy mobile networking over hundreds of sites using Magma. As another example, Brisanet Telecommunications brings connectivity to remote areas with Magma.

This blog post provides instructions for deploying and configuring the Magma core network on the AWS Cloud through Magma Cloudstrapper. Radio Access Network (RAN) and equipment required for end device connectivity is out of the scope of this blog. Before diving into the Magma deployment procedure details, let us take a look at the Magma solution architecture and Magma deployment model.

Figure 2 illustrates Magma’s deployment model. The Orchestrator manages one or more AGWs in different target environments for different use cases. For example, one AGW may run on AWS Outposts at cloud edge for mobile network and another AGW on AWS Snowcone at cloud far edge for manufacturing. The Orchestrator can provision the different networks based on Magma’s multi-tenancy solution. 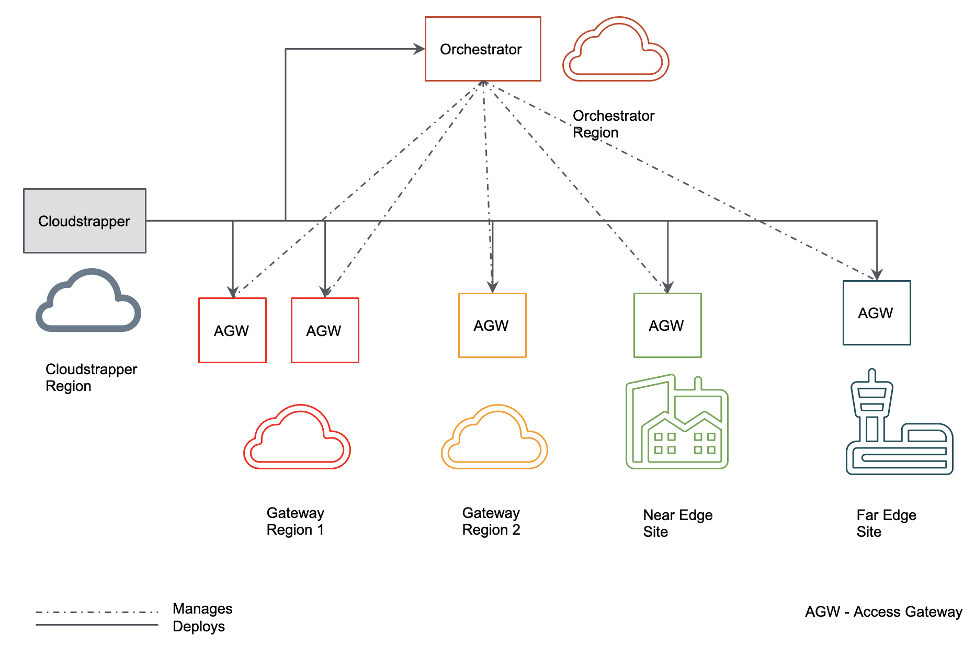 Magma has four deployment patterns for AWS Cloud, as shown in Figures 3~6. 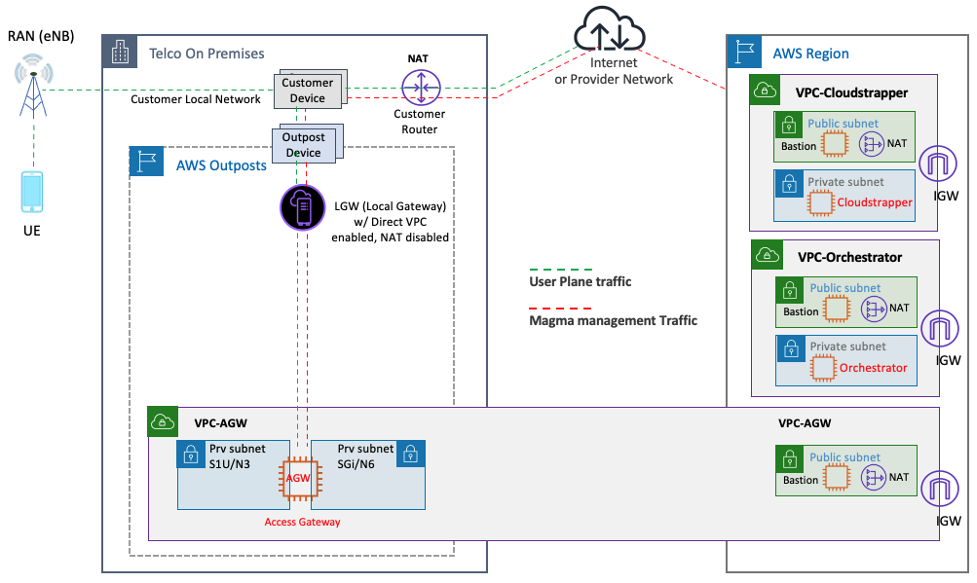 In the following section, we describe the Magma deployment process for the four patterns.

In the following, we walk through the Magma deployment process in detail.

(4) On the Configure this software page, choose Delivery Method, Software Version, and Region. The only default we recommend you change is the Region. Choose Continue to Launch.

(5) On the Launch this software page,

(1) Log into the bastion VM with the following commands.

(2) Log into the Cloudstrapper VM with the following commands.

Use Magma Cloudstrapper on AWS to configure, build, and deploy Orchestrator. Please ensure that you are deploying Orchestrator in a region that supports at least three Availability Zones

(2) Create a Magma work directory and clone the Magma master branch onto it.

(1) Create an Orchestrator parameters file with type yaml under directory ~/magma-dev, e.g., orc8r-parameters.yaml. The file parameters are as follows.

Here is an example of an Orchestrator parameters file, orc8r-parameters.yaml.

The Orchestrator deployment process may take about 25 minutes.

Update the domain registrar with the NS servers used by Magma.

There are three methods for deploying AGW for different target environments. They are summarized in the table below.

Method 1 is sufficient for one-time AGW deployment in AWS Region. Method 2 is efficient for repeated deployment of AGW instances. Method 3 is for Outposts, Snowcone, Snowball, and optionally for Region.

The first step is to obtain AGW AMI through Marketplace, no matter whether AGW is to be deployed in AWS Region, Edge Outposts, or Far Edge Snowcone or Snowball.

(1) Follow the instructions in Section 3.1.1. to find Magma AGW and launch it temporarily in a VPC in the AWS Region where the AGW will be deployed.

(2) Log into your AWS account. At the EC2 Instances Dashboard, locate the AGW instance. Create its base image with an AMI name (e.g, magma-agw-1.6.0).

An example of the site definition file parameters is as follows.

(3) Create an AGW parameters file with type yaml under directory ~/magma-dev. The file parameters are as follows:

Here is an example of an AGW parameters file, agw-parameters.yaml:

Run the following command for the first AGW:

Run the following command for subsequent deployment of AGWs on the same site. Specify an AGW ID either in the AGW parameters file (Step 3 above) or in the command line.

(3) Launch AGW in Outposts with AGW AMI. The AGW AMI has been created through a “baking” process described in Section 3.6. Of the two private subnets on the Outposts, one is for the AGW S1U/N3 interface and the other for the AGW SGi/N6 interface.

(4) Configure Outposts and customer router for traffic routing on premises.

For the Internet-bound traffic path, i.e. AGW EC2 on SGi/N6 subnet → Outposts local gateway → customer router → Internet as shown in Figure 4 above, create a route table for the SGi/N6 subnet, as shown in this example:

Configure NAT on the customer router.

(5) Enable communication between AGW and Orchestrator through Section 3.5. Configure AGW.

(1) Create an AGW AMI for Snowcone through the following steps.

(6) Enable communication between the AGW in Snowcone and the Orchestrator in the Region through the Internet. Follow the instructions in ​​Section 3.5. “Configure AGW”.

We recommend embedding an AGW AMI in the Snowball device before shipping. We describe the procedure below. Alternatively, you may import the AGW AMI from the region after the device arrives following these instructions.

(1) Create an AGW AMI for Snowball before shipping.

(6) Enable communication between the AGW in Snowcone and the Orchestrator in the Region through the Internet. Follow the instructions in ​​Section 3.5. “Configure AGW”.

There are two options to configure AGW: using the Cloudstrapper Ansible playbooks or manual process. AGW instances deployed from the baked AGW AMI do not require configuration. For the manual configuration process, please refer to Access Gateway Configuration.

The automated AGW configuration process is as follows.

(1) Log into the bridge node (Bastion) using SSH with its EC2 keypair.

(2) Configure the newly deployed AGW to communicate with the orc8r. Note that Magma orc8r to AGW connections are protected by TLS/HTTP2.

(3) Follow these steps to create an admin user for NMS.

(4) Generate a challenge key and hardware id and add it to Orc8r from the Magmacore website documentation.

Baked AGW AMI is used for AGW deployment in AWS Region, Edge (Outposts), and Far Edge (Snowcone, Snowball). It is created and configured once and used for different deployment targets. The process of creating a baked AGW AMI is similar to that of deploying and configuring AGW in an AWS Region using Cloudstrapper as described in Section 3.4.2. and Section 3.5. The end-to-end process is as follows:

(3) Create an AGW parameters file, agw-parameters-baked.yaml, under directory ~/magma-dev. The file parameters are as follows:

(4) Provision an AGW EC2 instance by running the playbook command:

The site configuration for this is pre-baked and is available as DevOps, and is referred to in the idSite variable in the input file. Note that this temporary AGW instance is created in a public subnet with an Elastic IP address, so that you can skip the bastion host and configure the instance directly.

(5) Run the playbook to configure the AGW instance

The new AGW AMI image is now available under the AWS EC2 Dashboard AMI tab with the buildAgwAmiName reference.

To clean up the VPC and EC2 environment used for the baked AMI creation shown previously, simply delete the AWS CloudFormation stack through AWS CLI or AWS Management Console.

3.7. Cleaning up an Orchestrator environment

Orc8r cleanup allows you to target an AWS Region and automatically clean up all the orc8r resources there and ensure it is ready for a new deployment.

The Region is specified in the orc8r parameters file with parameter awsOrc8rRegion.

Equipped with the Magma deployment information, you can proceed to deploy Magma on AWS Cloud.

For further details about Magma functions and Magma open source, please refer to the following resources: