Organizations with large numbers of assets need to monitor their physical and operational health, in order to detect issues and act upon them. This post covers the use case of a fictitious industrial organization AcmeDrone that uses drone devices to inspect assets periodically such as infrastructure components like valves, oil/gas pipelines or power transmission lines, located in hard-to-access areas. These inspections consist of having drone devices capture scene images of the assets and validating them against a machine learning model that detects changes to the asset, such as physical damage or physical obstacles that may affect the proper asset’s operation.

In this post, we provide an operational overview of the aforementioned asset inspection solution, and then describe how to set up the applicable AWS IoT services:

Consider a scenario where a drone device must follow a specific route to inspect various assets within a large industrial facility. During the inspection, the drone device would stop at each location on the route, in order to capture scene images of the assets. Those images will be sent to AWS and used to detect scene changes. If significant changes are detected, the solution notifies the asset operators.

The drone device uses AWS IoT Core to authenticate with AWS and uses the AWS IoT Device SDK for Python.

This asset inspection solution involves the following sequence of data and message exchanges: 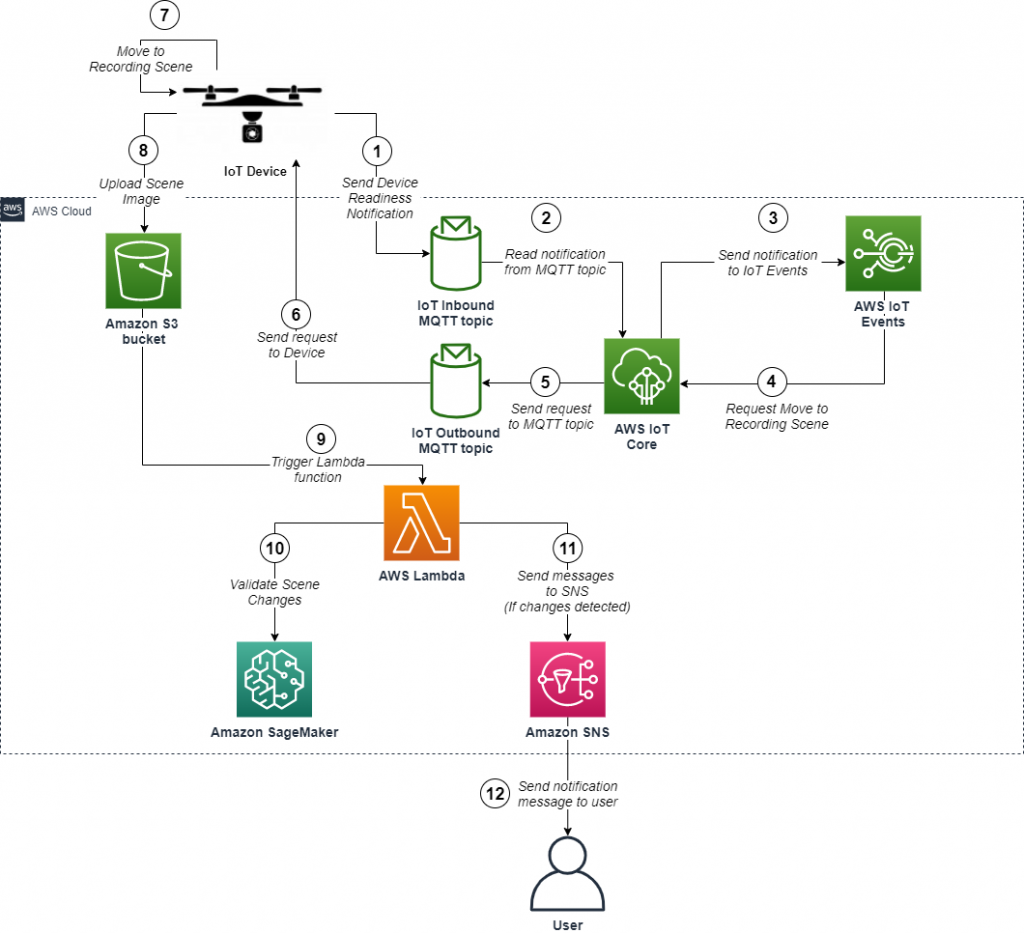 To follow along and set up the asset inspection solution, be sure to have the following:

In AWS IoT Events, we create the following components to start the drone device’s route:

The following sections explain how the above components are implemented and how to configure AWS IoT Core to forward the device notification to AWS IoT Events.

To create an input in AWS IoT Events

To create and publish a detector model in AWS IoT Events

In our example, we create a detector model with the following details:

To create a detector model, you can download this sample detector model file and import it into AWS IoT Events by following these steps: 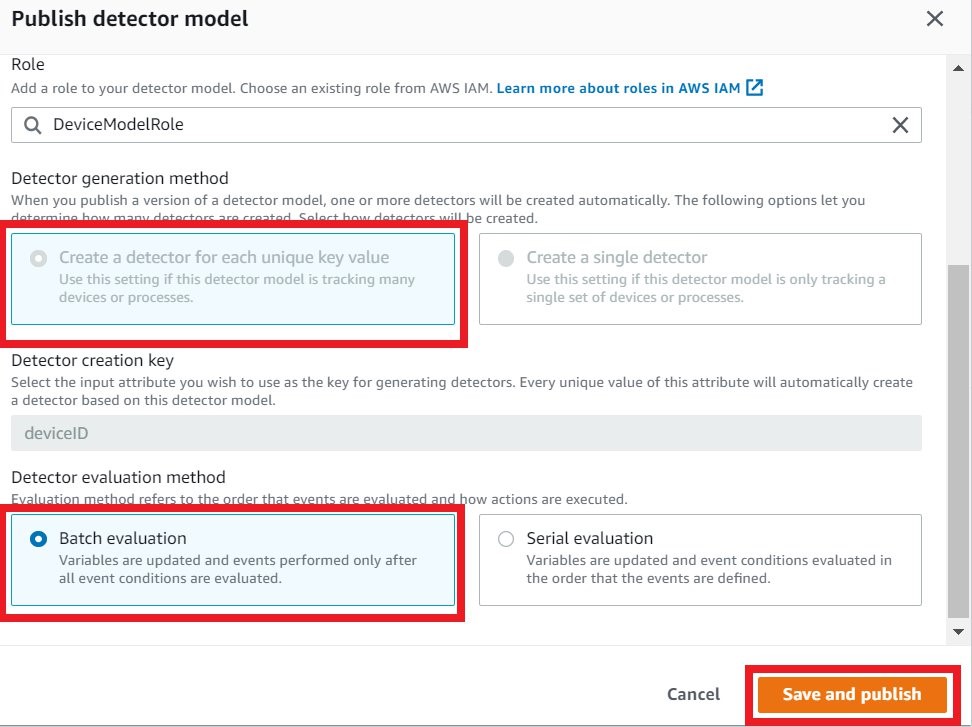 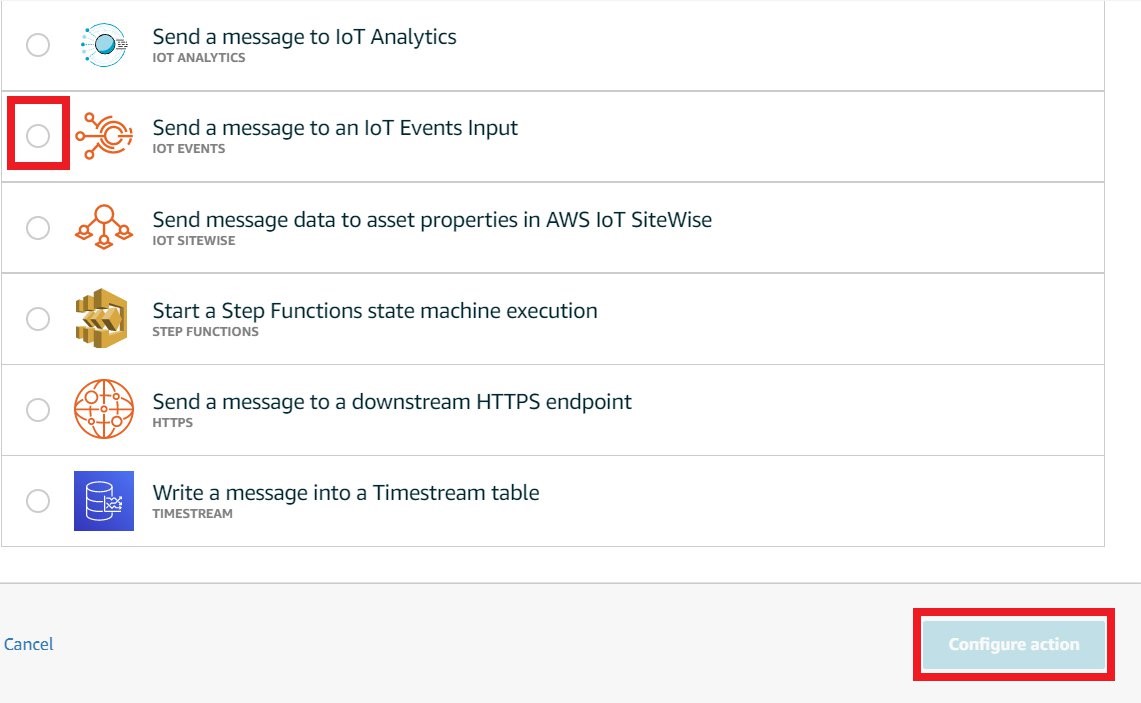 To set up Amazon SageMaker to detect scene changes

Amazon SageMaker builds a model that evaluates if an asset (i.e. scene image of the asset) changed.

In order to set up this solution, follow these steps:

To set up AWS IoT Core for device connection

You can create device credentials by following the guides below. Once completed, you will have a certificate, private key, public key and root CA certificate.

Once the device credentials are created, you can now connect your IoT device to AWS IoT Core and publish the device notification by following the steps outlined.

In order for your device to upload images directly into Amazon S3, AWS IoT Core has a credentials provider that allows you to use the built-in X.509 certificate as the unique device identity to authenticate AWS requests. This eliminates the need to store an access key ID and a secret access key on your device.

To set it up, please refer to the documentation for further information on the procedure. Attach the following IAM policy to the IAM role assumed by the credentials provider.

Note: Replace the content in bold with the bucket name previously created.

The following code snippet only shows how to upload an image to Amazon S3. To run the code snippet, download one of the images from this location. Then, specify its name and path as indicated below:

After you are done, if you want to ensure that no additional cost is incurred, you can remove the resources provisioned in your account. This includes the deletion of the following resources:

Note that for the above AWS CLI commands:

In this post, we walked through a use case where drone devices are used to capture scene images of a physical asset (e.g. gas pipe), which are then validated against a machine learning model to detect changes to the asset that may affect the proper operation of the asset.

To summarize the solution steps:

For further information on the services used, you can consult the AWS IoT Core, AWS IoT Events and Amazon SageMaker web pages.