When the global pandemic hit, the events industry was sent into a shockwave. While initially events were cancelled, the industry soon realized it could adapt by pivoting to virtual events. As a provider of event management technology, traditionally used for in-person events, Aventri engaged with its customers to understand their requirements from a virtual event platform and began working to develop an offering that would meet those needs, and fast.

“We heard from our customers that they wanted to take much of our platform functionality and extend it to a virtual environment,” said Shane Edmonds, CTO, Aventri. “Ultimately, they wanted to be able to present to large audiences in the same way they would in a physical environment. We knew that we needed to translate that on-site experience into the virtual realm.”

Also key was the ability to manage the complexity of live events compared to more simple online meetings or webinars. Aventri’s customers produce live events that can span several days and hundreds of sessions, many happening simultaneously.

As Aventri began to work on developing a virtual events platform that could manage that complexity, AWS launched Amazon Interactive Video Service (Amazon IVS). A long-time AWS customer, Aventri immediately saw that this service could simplify creation of interactive video experiences, making it easy and cost-effective to build and deploy the engaging, audience-focused streaming events its customers needed.

From starting development in April of 2020, Aventri was able to launch its initial beta product in June, followed by a full release in September. Edmonds noted: “I don’t think we could have met that pace without Amazon IVS. The fact that it simplified the whole development process was huge for us as it meant we had fewer moving parts and everything was seamlessly integrated, without needing to prop up additional services.”

Aventri benefited from ease of integration into its stack via the Amazon IVS API. Event organizers utilize Aventri’s Virtual Events product to conduct their meetings and event sessions; these are sent to Amazon IVS as a standard stream and the service does everything needed to make them available to viewers around the world. This includes ingest, transcoding, distribution, and playback. Aventri has been able to easily customize and enhance the audience experience through the Amazon IVS player SDK and timed metadata APIs. Thanks to a simple set of APIs, Aventri and its customers can synchronize features such as polls, surveys, and other overlays with live video. 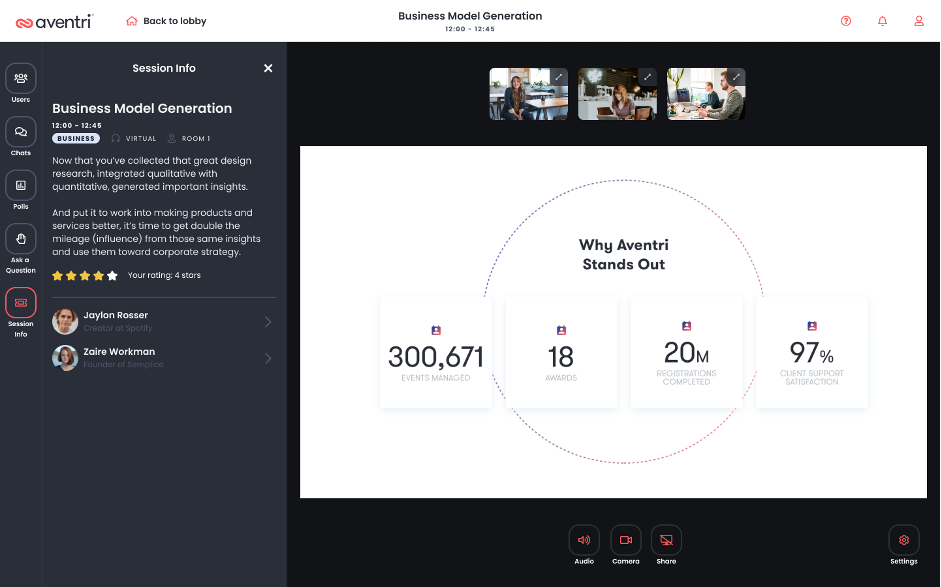 Using Amazon IVS has saved Aventri development time that would have otherwise been spent building a solution from scratch, as well as ensuring smooth processes throughout and a good end-user experience. The result was a simplification of the development and deployment process. It is also easy to use for Aventri’s customers, meaning they can concentrate on producing great content and engaging with audiences, without worrying about reliability or quality of the video stream.

A key feature of Amazon IVS is its ability to run events at scale, something that Aventri has tested to the max since launching its virtual event platform. Since its launch in September, the new platform has hosted thousands of events for more than a half million registrants, and delivered 9,000 presentations. Many of these events run over multiple days with hundreds of sessions; one event included 700 presenters.

Aventri has been able to build in audience interaction and engagement to parallel live events, thanks both to the ease of integration with Amazon IVS, as well as its ability to deliver consistent low video latency. Virtual events have also proven effective for organizers to better understand their audience, enabling them to capture on average 100 times more data points than they would at an in-person event.

Feedback from customers and event attendees alike has been overwhelmingly positive. The very first beta customer ran its annual convention using the platform. The virtual approach had its advantages, delivering a 50% larger audience than in any previous year and reaching about a dozen move geographies than ever before. The event also saw a great deal of interaction from attendees within the platform.

At some point, there will be a return to normality. However, it is likely that the future of live events is permanently changed. In fact, 90% of Aventri’s customers say they will maintain a virtual component even when in-person events resume. Using Amazon IVS, Aventri has built in features that support a seamless hybrid event, such as polling where the remote audience is able to engage at the same time as the in-person audience. In mid-April, Aventri will be launching more features aimed at facilitating a hybrid approach to event management.

Tom Murphy, VP of Technology, Aventri, concluded: “Amazon IVS has been pivotal to our success, but so has the whole experience working with the Amazon team. We have been supported throughout the rollout, both on a technical level and in terms of ensuring cost certainty. This interaction has been key to enabling a smooth rollout.”

Thanks to Amazon IVS, Aventri was able to pivot quickly, adapting to a new event environment and getting its solution to market fast. With simple-to-use managed live streaming, Aventri has been able to realize savings in time, cost, and management of the platform, and deliver a really simple user interface for its customers, both for online events now and hybrid events in the future. The results are beautiful and engaging interactive experiences for the end-user with low latency video delivery, helping to replicate the interactions they would experience at an in-person event.