Authored by Rick Young, SVP and Head of Global Products at LTN, and Gareth Capon, CEO at Grabyo. The content and opinions in this post are those of the third-party author and AWS is not responsible for the content or accuracy of this post. 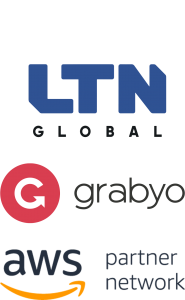 While cloud-based production has steadily gained favor among broadcasters, live events have, for the most part, remained tied to on-premises workflows. This is due to the need for ultra-low latency end-to-end transmission and the ability to handle uncompressed video. AWS continues to create secure, highly scalable services that solve these types of complex challenges, from cloud-based transcoding and packaging to multi-screen delivery and monetization services with pay-as-you-go pricing. Two solutions for live media workflows are AWS Elemental MediaConnect, a high-quality transport service for live video over IP, and the newly released AWS Cloud Digital Interface (AWS CDI). CDI is a network technology that allows broadcasters to reliably transport uncompressed live video between applications with network latency as low as eight milliseconds.

For this demonstration, a live camera feed was sent from a football stadium in Oklahoma City into AWS via the LTN Network, and CDI replicated the uncompressed feed for ingest into Grabyo. Grabyo’s advanced live broadcasting platform was then used for vision mixing and to add motion graphics to regionalize each feed for distribution using its integration with Singular.Live. Although this workflow used only three outputs, this workflow could scale substantially more. Grabyo could create tens, if not potentially hundreds, of different variations of this production output in the future. From a control point of view, you could do this with a much smaller number of people who could be based anywhere.

In this demonstration, a single graphics controller in London applied the motion graphics using the Singular Live graphic platform, also running on AWS. By replicating the live feeds in the cloud using CDI, each uncompressed video feed maintained the quality and ultra-low latency required for a live sports production.

In addition to replicating streams and applying motion graphics to regionalize feeds, broadcasters could just as easily apply a similar approach for other use cases. These include producing live streams or highlights for social media distribution or producing additional feeds with audio commentary in multiple languages. With an end-to-end cloud workflow, you can bring in a feed from an event and replicate that feed a limitless number of times and start to use very lightweight workflows to change the presentation output. And that has positive implications in terms of platforms, monetization, and commercialization.

A key part of the workflow’s success is that feeds replicated with CDI remain uncompressed, eliminating generational loss from encoding/decoding/re-encoding. With this capability, CDI users gain added flexibility to deploy processing simultaneously across multiple instances. Customers can grow and shrink cloud-based broadcast production infrastructure based on each event’s scale and complexity, buying and pre-provisioning infrastructure, and letting it sit idle between events.

Traditional live broadcast production can be complex and resource-intensive, but this demonstration showed how cloud-based production changes that. Just three people were working on this production, none in the same room, with everyone interacting in live low latency, real-time workflows in a completely hybrid model. It’s immensely complicated but exciting to do just about anything with these workflows, which, five years ago, we said we’d be doing this someday.

The benefits of cloud-based production are important in light of the global pandemic. With operators unable to physically sit together, production teams need tools that facilitate seamless collaboration, potentially from anywhere across the globe. Probably the biggest challenge for LTN is helping clients understand and be comfortable with the changes that cloud production introduces. Nothing about this workflow was a huge challenge for LTN; we just needed to get the plumbing aligned, bring all the teams together, and make sure that the signals flowed correctly from LTN into AWS into Grabyo.

While the feed for this demonstration originated at a football stadium in the US, the venue could be anywhere in the world. Broadcasters, news organizations, and live event producers could use this same workflow to regionalize and distribute feeds to any number of outlets, including traditional broadcast affiliates, Multi-channel Video Programming Distributors (MVPDs), and social media channels.

As consumer demand for live content continues to grow, the ability to scale cost-effectively and on-demand is enormously important for live production. With these types of workflows, you can put together more live content in more places for more people, which democratizes the content opportunity for many more consumers. That’s really important whether for sports, news, or music, or even other markets like corporate video and education. As platforms and devices evolve and bandwidth continues to improve, the demand for high-quality production also increases, a key factor for us.”

Not that long ago, production and delivery were done for the most part out of a truck, but the pandemic has accelerated the need for cloud-based remote production workflows that allow teams to operate remotely. It’s only a matter of time before we begin to see widespread adoption.

This demonstration merely offered a glimpse of what is possible with remote, cloud-based live video production. Other examples of distributed, multi-vendor applications that can use AWS CDI to enable Independent Software Vendors (ISVs) to add other applications, including channel playout, live video production switching, motion graphic insertion, multi-viewer applications, video frame rate, color space conversion, forensic watermarking, video decoding, and encoding. The potential for live production in the cloud extends far beyond live sports and is equally applicable for education, fitness, retail, and other industries.

For more details about CDI, and to keep track of the latest CDI developments from AWS, visit: https://aws.amazon.com/media-services/resources/cdi/