Territory Studio / life at work: A visualization of the data in content creation

A motion graphics and vfx specialist, Territory’s team of artists and designers rely on an ever-evolving relationship with technology to realise their creative work.

In 2016, AWS Thinkbox Deadline was implemented to efficiently manage the increase in rendering requirements as the studio scaled.

With an opportunity to create a self-initiated installation for London’s annual Clerkenwell Design Week, the team wanted to share a data visualisation of activity in the studio. Deadline’s API provided the perfect data source to bring the human-digital relationship to life. ‘

Collaborating with Will Gallia of stillatplay, we created Life at Work, a beautiful echogram of the studio’s creative activity on any one day. A playful interpretation of data feeds taken from Territory’s internal render farm, the live installation reveals the digital heartbeat of our studio. 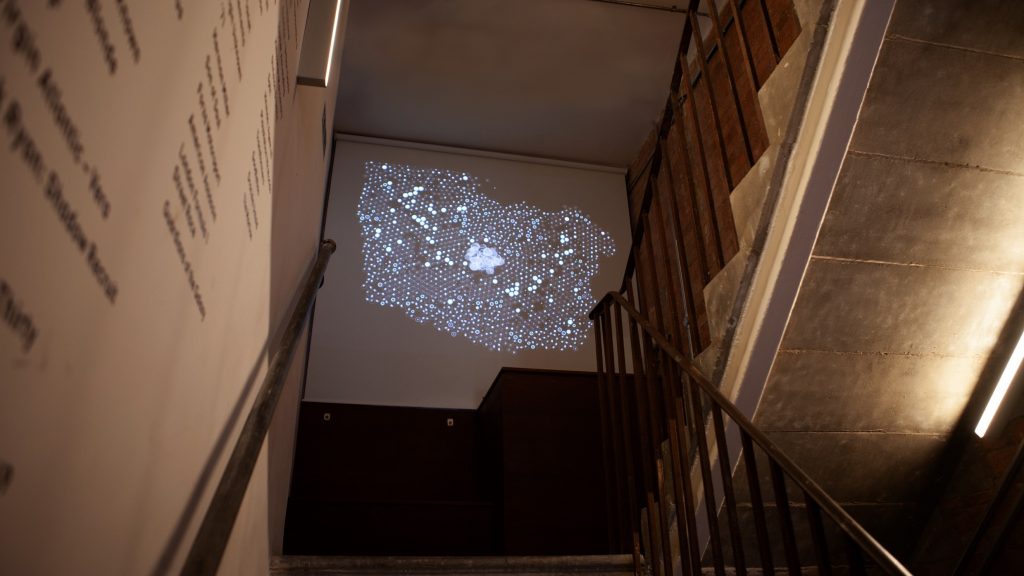 Using the metaphor of ‘render eggs’ generated by ‘mother nodes’, Life At Work visualizes the studio’s creative production process in a captivating narrative. Every egg represents a new task, and the journey from server to output is more fragile than we imagine. The installation charts their progress as each egg evolves through various stages, as reflected in their design – and in a poignant reflection of our own creative journeys, many achieve success, but some fail and some stall. 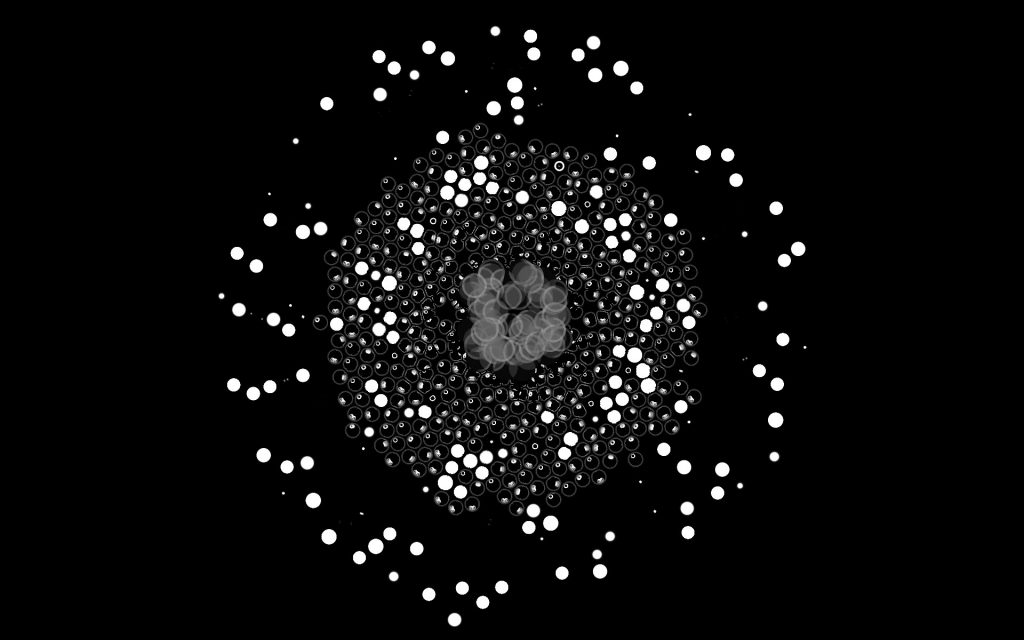 Organic and tactile, the visualisation presents a living status board of the day’s work. Anyone passing can intervene to reset the visual by using hand gestures to clean out any ‘failed’ or ‘suspended’ tasks.

Throughout Clerkenwell Design Week, it provided our team with a living representation of the day’s work that inspired admiration, comment and calls for revealing even more detail. And, for visitors, it was a great means of introducing the creative production process to an audience that doesn’t always appreciate the critical role that computing now plays in delivery. Simple, playful and beautifully realised, the metaphor describes the relationship between an artist and his digital tools in human terms, making the complex render process from task to finished output easy to understand.

To create Life at Work, we drew on the creative coding expertise of stillatplay. With AWS Deadline as our task management software, Will wrote specific programmes to create the interactive installation that married the live status board features with the organic visual metaphor. 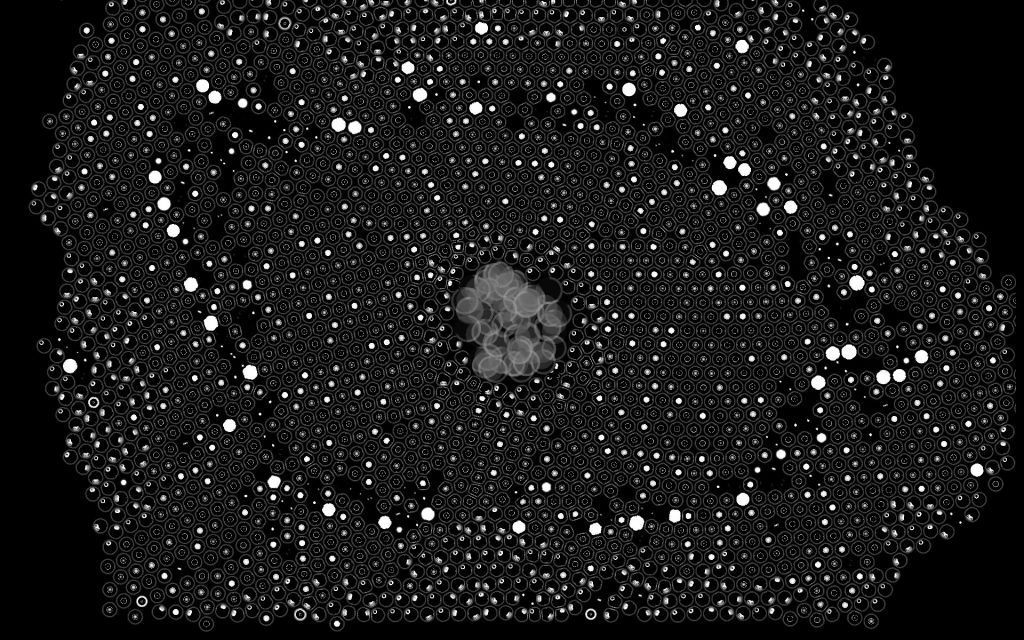 Using the Deadline Python API to query the server for active and suspended jobs, all the tasks of each job were collated and their states were tracked. Task states were either Queued, Rendering, Suspended or Failed. The Deadline server was constantly polled, and the state of each slave was also queried for CPU usage. Updates to state changes were then immediately reflected in the visualisation.

A program written in C++ brought all the elements together. Programmed to create a cell-like “particle system”, each task was visualised as a single cell in the system and forces were applied to them, resulting in specific ‘behaviours’. For example, queued and rendering cells were attracted to the centre, other were not. Large parts of the graphics were purely in GLSL to leverage the power and performance of the GPU, and depending on their state, each cell rendered a looping image sequence. 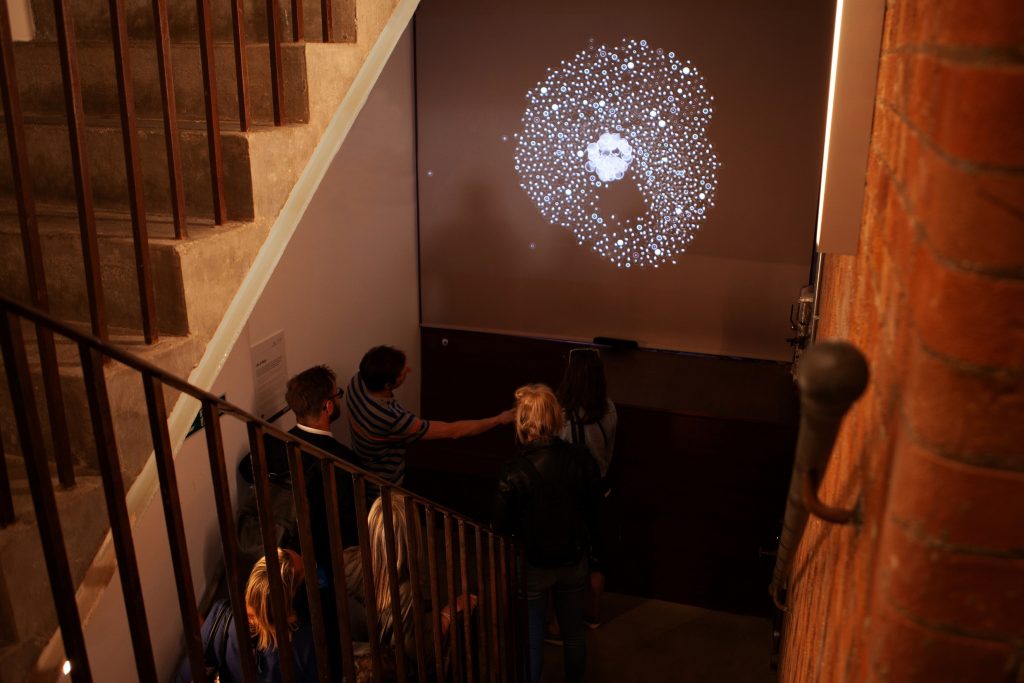 A C++ module was also written to allow for physical interaction with the projected animation. By gesticulating, participants could disrupt the cell ecosystem, causing it to spread and then settle again into equilibrium.

Territory Studio is a creative specialist with a unique approach to motion design, visual effects and digital experiences. Drawing on deep expertise of narrative design for film, games and brands, we blend creative with technology to realise compelling future facing experiences.

A creative code specialist, Will Gallia writes a variety of programs and tools for interactive installations and commercial projects.