As one of the largest business and financial news companies in the world, millions of people around the world rely on Dow Jones properties for their daily market data needs. The Market Data platform, one of Dow Jones’ most critical business systems, serves the real-time markets data to all of its news sites, including WSJ.com, Factiva.com, Barrons.com, and MarketWatch.com.

In 2019, Dow Jones made a strategic business decision to change its provider for all market data. The transition, which created cost benefits and business opportunities, required an ambitious timeline. To meet the timeline, the team determined that a shift from on premises to the AWS Cloud would allow the increased flexibility and rapid scaling capabilities needed to develop and test in parallel during the migration period.

This article explores the tools and best practices Dow Jones used to successfully migrate and modernize its business-critical database workloads for the Market Data platform from on-premises MSSQL to Amazon Aurora. 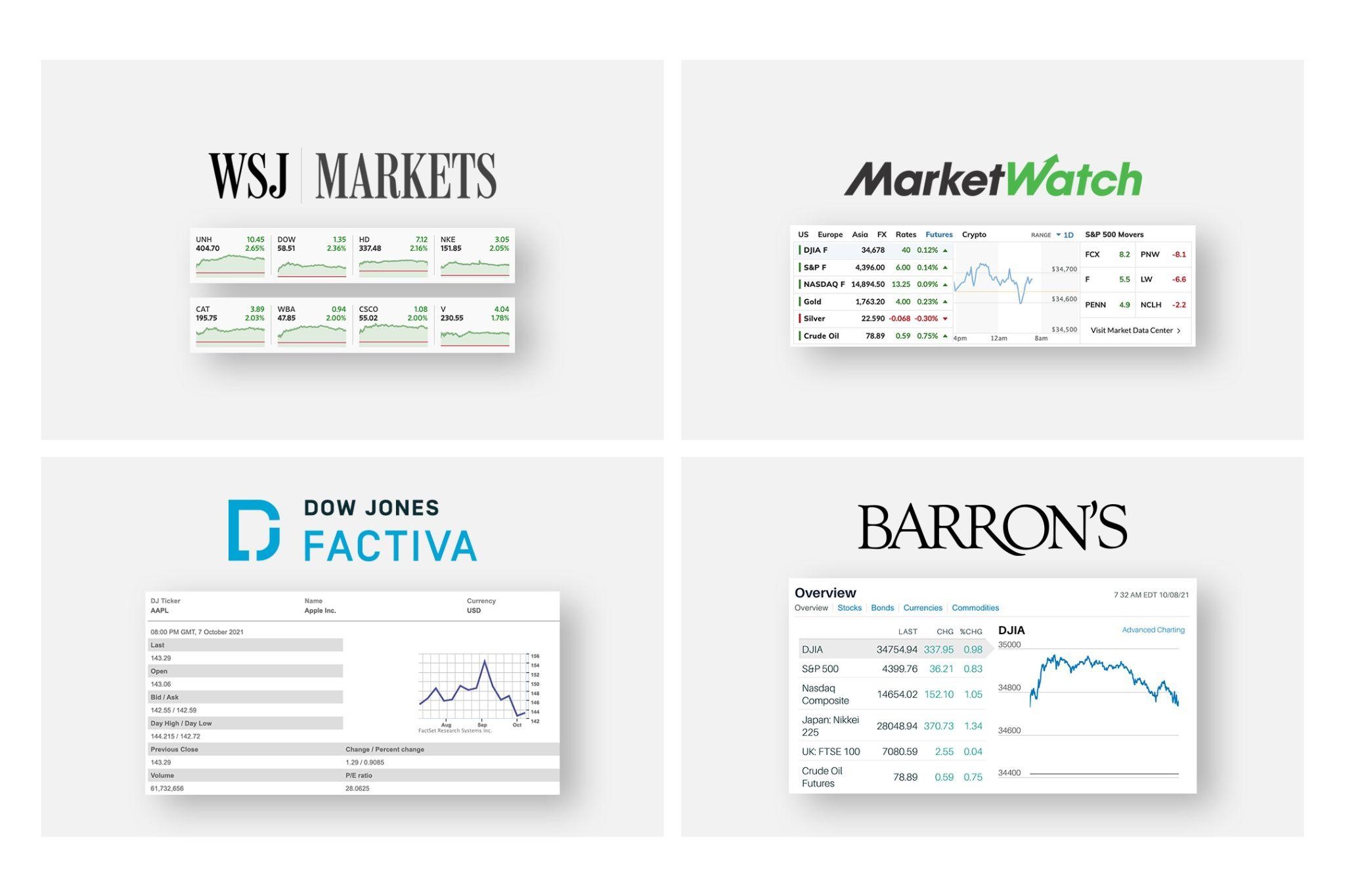 At peak capacity, Dow Jones processes more than 3,000 requests per second through the Market Data platform. The data ranges from official end-of-day pricing from exchanges to real-time pricing data, company information, and mapping data. The Dow Jones Market Data platform then ingests, normalizes, and surfaces this market data across Dow Jones. Given its strategic value to the business, the platform must be highly reliable, scalable, and fast, delivering real-time market data to consumers within milliseconds — with protection from downtime.

Prior to modernizing the platform, the system consisted of more than 44 separate applications running across 200 on-premises servers split into four main groups.

The core data storage layer of the platform was an on-premises 2 TB relational database management system built on Microsoft SQL Server 2008 R2. This database served as a central repository for everything market data-related, storing all data for the application system. For example, it housed data about each company that mapped directly back to its listing on each stock exchange. The server database also stored Market Data’s operations data for processing transactions, including all historical pricing data going back to the 1970s.

Some applications that manage and serve market data to consumers were centered around the SQL Server database. The migration to AWS enabled the retirement of these systems, including:

Each of these applications were responsible for a different part of the Market Data architecture, such as managing alerts, calculating indexes, serving pricing, and updating its query engine. 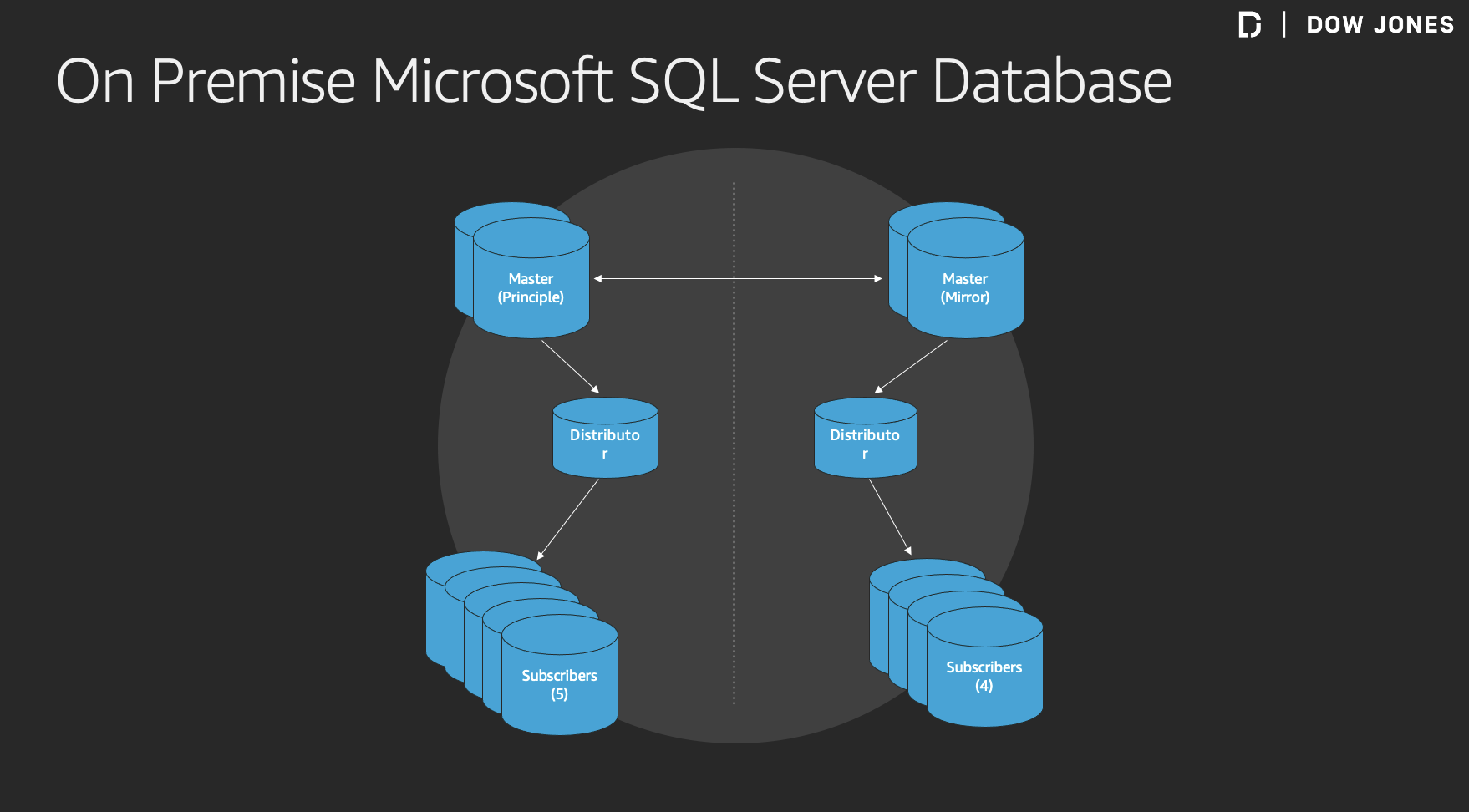 To enable the fastest time to production, the Dow Jones team used a lift-and-shift cloud migration strategy to migrate the core components of its Market Data application to AWS. This strategy allowed Dow Jones to accelerate the migration with minimal code changes — without redesigning the entire application. This approach would be transitional: once Dow Jones lifted and shifted onto AWS, it planned to modernize, moving to a cloud-native approach. AWS’ cloud services and optimizations provided significant benefits that made it easier to upgrade and rearchitect the system.

In order to manage licensing costs during this process, the company upgraded its existing on-premises 2 TB MS SQL Server database to a cloud-native database, enabling it to take full advantage of the reliability, scalability, manageability, and cost optimization this type of AWS database provides. As such, Market Data was rearchitected using Amazon Aurora. Amazon Aurora is a MySQL-compatible, relational database built for the cloud that combines the performance and availability of high-end commercial databases with the simplicity and cost effectiveness of open source databases.

As part of this process, Dow Jones generated the AWS SCT database migration assessment report. This report evaluated how much of the project could be completed by using the AWS Schema Conversion Tool and what else needed to be done to complete the conversion. The report was an extremely valuable tool as it summarized all of the schema conversion tasks and detailed the action items for the schema that could not be converted to the Aurora MySQL target DB instance. 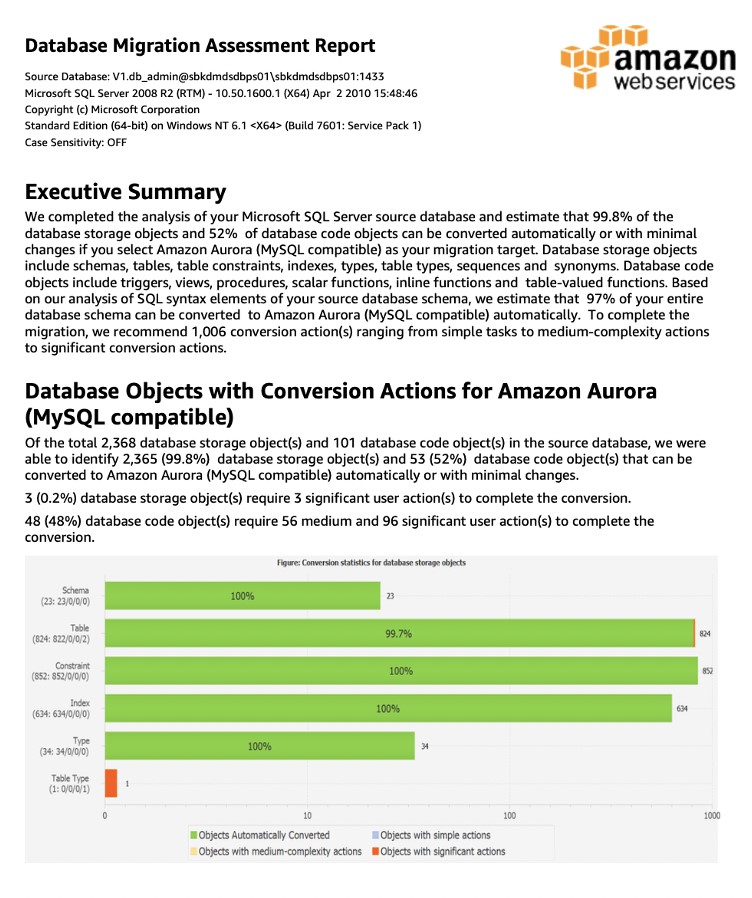 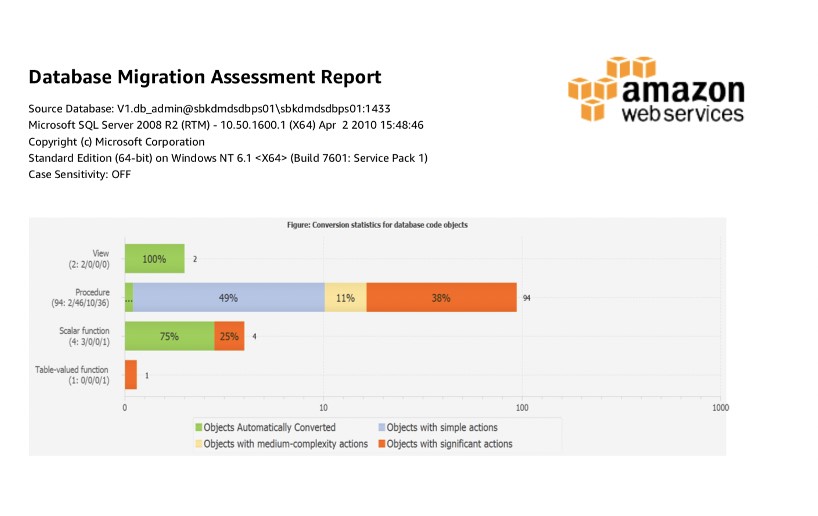 For example, one of the significant database code object issues was related to Dow Jones’ use of global cursors:

As it turns out, the Aurora MySQL Cursors framework was simpler than SQL Server and provides only the basic types of servers. If Dow Jones’ code had relied on advanced cursor features, it would have needed an entire rewrite. Instead, Dow Jones was able to resolve this issue by using temporary tables.

Dow Jones encountered a second issue related to a SQL Server function. This function used a nested SQL statement to get a tree of records and its parent records. Since this recursion could not be recreated in MySQL, Dow Jones had to rewrite the SQL statement in C#.

For each conversion issue, Dow Jones modified the objects on the source SQL Server database so AWS SCT could convert these objects to the target Aurora MySQL database successfully. Using SCT, Dow Jones was able to double-check the assessment report after each iteration.

During this stage, several small POCs were run in parallel to validate that code changes were performing as expected. Dow Jones continued this process until it found no further conversion issues. In total, Dow Jones estimates it took one engineer a month to rewrite code for its stored procedures. Dow Jones found that fixing one code issue often fixed other issues simultaneously, reducing the overall time spent. Once all conversions were complete, Dow Jones applied the schema changes to the Aurora MySQL database and was ready for the next stage – the data migration.

By using AWS Database Migration Service (AWS DMS), Dow Jones was able to quickly and securely migrate its data continuously from the on-premises SQL Server to Amazon Aurora MySQL. The source database remained fully operational during the migration, which minimized downtime to the Market Data applications that relied on its database. When configuring the database migration task, Dow Jones chose the “migrate existing data and replicate ongoing changes” option. This ensured that AWS DMS would capture and apply changes, even after the bulk data had been loaded. AWS DMS managed the complexities of the full data migration, successfully completing the process within 24 hours. As a final step, the AWS DMS replication task was updated to “CDC only” to ensure both databases remained in sync until the final switchover.

In its next stage of migration, Dow Jones kicked off an extensive period of internal testing to ensure that the Market Data platform was ready for production. During this period, Dow Jones collaborated with AWS experts to perform an AWS Well-Architected Review (WAR) of the platform. This critical step ensured that Dow Jones was using best practices to ensure operational excellence, security, reliability, and performance efficiency. To ensure success, Dow Jones made a strategic business decision to overprovision capacity rather than optimize for cost. Cost optimization was then slated as part of a post-migration initiative.

The Market Data WAR was instrumental in uncovering several key technical issues with the current AWS architecture that required immediate attention and remedying. More importantly, the Market Data team was able to walk away with an actionable plan detailing the following best practice recommendations:

At this stage in the migration process, Dow Jones had two parallel database environments up and running for Market Data:

Next, Dow Jones worked to facilitate the cutover to the Aurora MySQL without requiring every client to make a change to its endpoints. In order to meet this challenge, the Market Data team used a proxy service called NGINX to redirect client data requests from on premises to AWS. This ensured uninterrupted service for Dow Jones’ clients. Within 8 hours, proxies were installed, DNS entries were updated, and Market Data clients were successfully connected to the Aurora MySQL database on AWS. Two weeks later, the on-premises MS SQL Server database was officially shut down and all production traffic was hitting the Aurora MySQL database on AWS. The cutover to Aurora MySQL was complete.

Dow Jones’ migration journey did not end once it had migrated to AWS. There was a post-migration stage. During this stage, Dow Jones addressed cost optimization and rightsizing opportunities across its entire AWS infrastructure. Using Amazon CloudWatch metrics and CloudHealth management software to analyze data, Dow Jones quickly determined, based on current performance and usage requirements for the Market Data workload, that the database instance types/sizes it was using for Aurora MySQL were significantly overprovisioned. As a result of this analysis, Dow Jones took steps to rightsize the Aurora MySQL database instance type/size to better match current capacity requirements and eliminate two Reader nodes per region for further cost savings. After redeploying, Dow Jones was able to reduce its spend significantly.

Dow Jones needed to ensure its mission-critical Market Data platform remained secure, high-performing, resilient, and efficient. By migrating and modernizing from on-premises Microsoft SQL Server to Amazon Aurora, Dow Jones not only manifested cost benefits, they also benefitted from the cloud-native tooling. With features like Amazon Aurora’s Auto Storage Provisioning and replicas, it’s easier for Dow Jones to maintain and replicate their data.

AWS can help you assess how your company can get the most out of the cloud. Join the millions of AWS customers that trust us to migrate and modernize their most important applications in the cloud. To learn more on modernizing Windows Server or SQL Server, visit Windows on AWS. Contact us to start your migration journey today.