In the United States, our passionate sports fans debate which is the bigger (and better) sporting event: the Super Bowl for football, or the World Series for baseball? But as sizable fan bases go, it’s hard to beat cricket. With an estimated 2.5 billion enthusiasts worldwide, many of which live in India, cricket reigns supreme.

As big as cricket is in India, fan activity ebbs and flows with matches. This creates a conundrum for MyTeam11, a leading online fantasy sports application with more than 15 million global users. MyTeam11 struggled to scale its on-premises, Microsoft Windows and SQL Server–based application environment as user traffic spiked tenfold during the Indian Premier League season. Instead of remaining mired in such “sticky wicket” conditions, MyTeam11 turned to Amazon Web Services (AWS). With AWS, the company was able to automatically scale to support millions of users during peak times, deliver software features 70 percent faster, and save up to 80 percent on licensing and provisioning costs.

Consider this a “six” that would make even the “Master Blaster” Sachin Tendulkar proud. (And for those who may not be cricket-inclined, this translates to “fantastic.”)

Like many companies, MyTeam11 was running its Windows and SQL Server–based application environment in an on-premises environment. Over time, this approach proved to be increasingly difficult to sustain. This was especially evident when MyTeam11 had to support a 10X increase in user traffic during the Indian Premier League, a professional cricket league in which eight teams play during April and May. 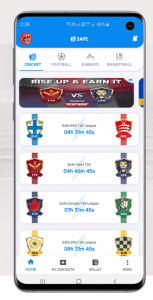 MyTeam11 supports five different sports with an array of differing schedules. However, the Indian Cricket Premier League stress-tests its systems more than any other sport, according to Nitish Bugalia, head of product and strategy at MyTeam11. Unfortunately, the company’s on-premises environment created more “stress” than “test”: “These are the two most important months of the year for us, and we prepared all year to scale to support that traffic. That took too much time and effort. We spent many weeks making sure we had enough server and storage capacity to meet the demand, and managing the servers during the actual event was also time-consuming.”

This would have been hard enough, but MyTeam11’s on-premises environment also proved “brittle.” “We usually send notifications to users 20–25 minutes before a cricket match to announce the player lineups,” continues Bugalia. “Before one important match, we had website performance issues and the site was down for 30 minutes. By the time we got it back up, we had lost half a million dollars in revenue and our reputation was damaged.”

The pressure was only going to increase.

Despite this challenge, MyTeam11 was awarded the title sponsorship for the West Indies vs. India tour. This tour happened in May 2019, when the Indian cricket team traveled to the US and Caribbean for a series of matches that spanned several months. It was an incredible opportunity for MyTeam11 to increase its global brand recognition, remembers Bugalia, but “managing the traffic surge for the tour on our platform remained a key challenge. Instead of getting to enjoy the matches, MyTeam11’s tech team fretted through “sleepless nights,” he continues.

For MyTeam11, it was time to rethink the company’s on-premises infrastructure to meet intensifying customer demands.

After careful evaluation, MyTeam11 decided to run its application infrastructure with AWS. Given tight time constraints before the West Indies vs. India tour, MyTeam11 opted for a rehosting (“lift-and-shift”) approach to migration, rather than rewriting its application. Forty days later, the migration was complete.

The customer benefits, says Bugalia, have been significant: “We can deliver a highly available, reliable, and fault-tolerant application that improves the end-user experience.”

Part of this improved availability and reliability stems from its newfound ability to scale on demand. Adding capacity used to take at least six days. But now, Bugalia says that the company “can use AWS to automatically and instantly scale the application environment and accommodate peak usage during that critical April and May time frame. We don’t have to spend our time on server provisioning and management anymore.”

By building on AWS, MyTeam11 also operates at a much higher development pace. “Using AWS CodeDeploy along with our CI/CD pipeline, our time-to-market is 70 percent faster, so we can release code more frequently now,” Bugalia says. “For instance, if we want to test how users react to pricing changes, we can do that in a few minutes because of the automation we now have in place.”

Having realized so many benefits by running on the AWS Cloud, MyTeam11 is ready for the next phase.

“To us, modernization means using cutting-edge, open source technology to create delightful customer experiences, and it means focusing on features rather than putting out fires,” says Bugalia. As part of this modernization, MyTeam11 is changing its approach to Windows licensing. The company plans to eliminate the more expensive enterprise Windows licenses and optimizing its stack to work with standard Windows licenses. Expected cost savings? More than 80 percent.

To see how your organization can, like MyTeam11, save money while driving innovation and improving performance, please continue to join me as I highlight companies on their modernization journeys onto AWS. As you do, I hope you’ll also ask the question, what’s your plan for moving off Microsoft Azure? Or off Oracle? Or whatever old-guard technology keeps you from modernizing to better care for your customers?