If you’re thinking of running your Microsoft Windows or Microsoft SQL Server applications on AWS, you’re not alone. We’ve spent 11 years helping thousands of customers run their most critical Microsoft workloads on AWS. Because we’re committed to helping you run your applications where you want, in December we launched a simplified Bring-Your-Own-License (BYOL) experience as an easier way to bring, and manage, existing licenses for Microsoft Windows Server and SQL Server to AWS.

Why does this matter? With this new BYOL experience, customers can use their existing Windows Server or SQL Server licenses to create virtual machines (VMs) in Amazon Elastic Compute Cloud (EC2) while AWS takes care of managing licenses to ensure compliance to licensing rules. We want you to have the best experience with Windows and SQL Server, and we’ve worked hard to ensure we can deliver this on AWS.

So let’s talk about how to get started. In this blog, I address how to use Windows Server Bring-Your-Own-License (BYOL) when importing a Windows VM image as an AMI with AWS Dedicated Hosts. In addition, I cover AWS License Manager configurations so that you can automatically track Windows license usage on AWS Dedicated Host through an AWS License Manager Host Resource group. Ready? Let’s go!

While there are different migration strategies for moving applications to the cloud, many organizations choose the simplest: rehosting. McKinsey’s research indicates that rehosting applications in the cloud results in 30–40 percent cost savings, a finding consistent with our customer experience. So what’s the process?

Customers can easily rehost workloads onto VM on Amazon Elastic Compute Cloud (Amazon EC2). Enterprises typically have VM templates to maintain a standard operating environment for provisioning on-premises VM. They can use these templates in AWS to standardize their operating systems environment across both cloud and on-premises environments.

VM Import provides the ability to import a VM from your virtualization environment to Amazon EC2 as an Amazon Machine Image (AMI). With VM import/Export, you can launch EC2 instances from your AMI at any time. Additionally, you can export a VM that was that was previously imported from your virtualization environment. You can also import disks as Amazon EBS snapshots. Finally, VM Import supports Elastic Network Adapters (ENA) drivers for Linux. ENA support is enabled only if the original VM has ENA and/or NVMe drivers are installed. For this tutorial, we recommend installing the latest drivers.

Before we started, it is important to highlight the operating system and image format that VM Import/Export supports and understand the limitations on importing instances and volumes.

VM Import/Export supports the following image formats for importing both disks and VMs:

Note: you can only import VMDK files into Amazon EC2 that were created through the OVF export process in VMWare.

UEFI/EFI boot partitions are supported only for Windows boot volumes with VHDX as the image format. Otherwise, a VM’s boot volume must use Master Boot Record (MBR) partitions. In either case, boot volume cannot exceed 2 TiB (uncompressed) due to MBR limitations. Additional non-bootable volumes may use GUID Partition Table (GPT) partitioning, but cannot be bigger than 16 TiB. If you are using VMIE APIs (instead of AWS Server Migration Service), you must construct a manifest file for disks larger than 4 TiB. For more information, see VM Import Manifest.

Windows Server operating systems support either BYOL or AWS licenses. Your licensing option can be defined while creating a new VM Import task using –license-type parameter, and setting the value to Auto, AWS, and BYOL. We are using BYOL as the value for license type parameter to import the Windows Server OS as an AMI.

Note: If you choose Auto (the default), the AWS license is used if the VM has a server OS.

There are specific rules that apply when you use your BYOL Microsoft license, either through MSDN or Windows Software Assurance Per User. The rules are defined in the Licensing for Windows section of VM Import/Export Requirements.

For this blog, I’ve created a S3 bucket as ‘vmimport-syd’ and have granted required user access to S3 bucket as shown in subsequent step.

Setting up the account and granting Amazon S3 permissions

Note: You must define user permissions to use VM Import/Export. The permissions allow the VM Import user to access all AMIs across the account.

Note: The resource section has two lines pointing to same S3 bucket with a difference in ‘/*’ in the second line. Be careful when changing the bucket name, as it might cause import to fail.

VM Import/Export requires a role to perform certain operations on your behalf. You must create a service role named vmimport with a trust relationship policy document that allows the VM Import/Export service to assume this service role and attach the IAM policy. For more information, see IAM Roles in the IAM User Guide.

Note: Before you export the VM image, make sure it is configured for the export process. The link provides required configuration for VM Export.

The following examples use the AWS CLI command import-image to create import tasks.

The output of the command is as follows. To check the status of AMI import, take note of the Import Task ID.

3. Verify the status of your import by running the following command, replacing "import-ami-0cce9e33f76c429bd" with the Import Task ID captured in the previous step:

The following screenshot shows the status when the image was being converted followed by screenshots of preparing AMI and completion of import process. 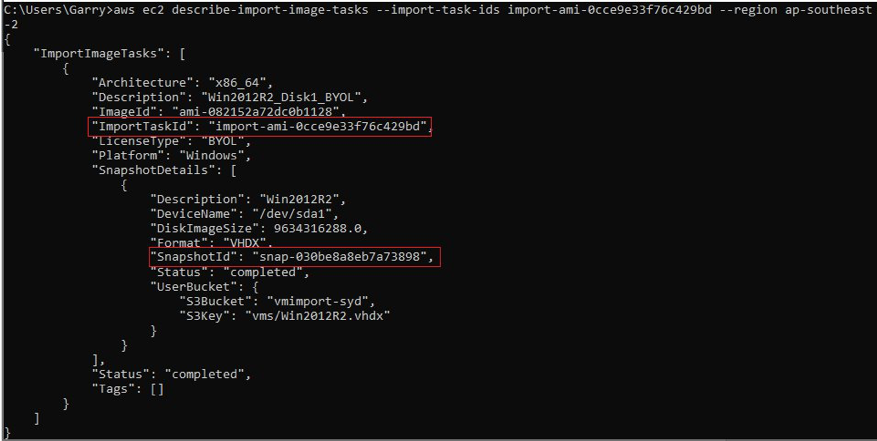 Once the image is imported it can be found under snapshot section of EC2 Service on AWS console as shown in following screenshot. You can search the snapshot using the ImportTask ID and Snapshot ID as highlighted in preceding Figure 4.

Note: if you have not configured the Dedicated Host to support multiple instance types, you will be restricted to only one instance type. 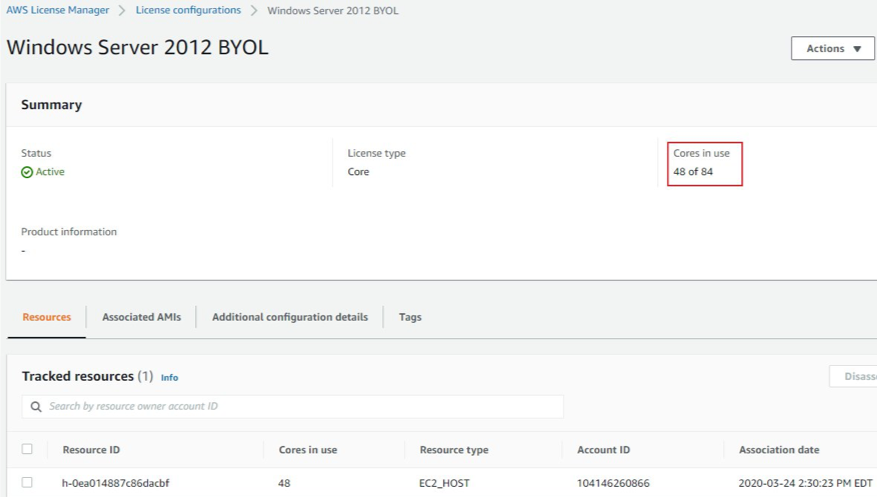 After the VM is imported successfully, it is recommended to delete the S3 bucket if not used for any other storage purpose or delete the image exported from on-premises. By deleting the exported image or bucket, you are not charged for the storage cost to store the unnecessary images.

At AWS, our concern is to help our customers get the most value from their preferred software, which is why we’ve spent over a decade helping customers be successful with Microsoft technologies. As you migrate your on-premises Microsoft workloads to AWS, you have flexibility with licensing options. Customers can choose from a variety of available licensing options, including buying license-included AWS instances with a pay-as-you-go model and a bringing your own licenses.

We also make it easier to bring your existing VM image catalog to AWS without recreating the images using EC2 VM Import/Export. In addition, you can use the new, simplified, Bring-Your-Own-License (BYOL) experience to easily bring and manage your existing licenses for Microsoft Windows Server to AWS Dedicated Hosts. Whether you’re running Windows or Linux, SQL Server or MySQL, we want you to be successful.