Accelerate your migration with version 3 of AWS Cloud Migration Factory

Today, we’re launching the third version of the AWS Cloud Migration Factory (CMF), previously called CloudEndure Migration Factory. The AWS CMF is recommended for customers rehosting more than 100 servers to AWS, providing orchestration and automation capabilities to simplify the migration. This release provides further automation to support your medium and large scale AWS migrations. In this post, I will:

What is AWS Application Migration Service?

In May 2021, AWS announced the general availability of AWS MGN. This new service enables you to move applications to AWS without changing your applications, architecture, or migrated servers. After the replication agent is installed on a source server, AWS MGN continuously replicates the block storage to AWS without interfering with the normal operation of the servers. Furthermore, once you’re ready to build the target infrastructure, AWS MGN automatically converts your source servers to run natively on AWS. This capability helps simplify the migration of all applications to AWS, including enterprise applications such as SAP CRM, Oracle E-Business Suite, Microsoft SharePoint, and commercial databases.

The following diagram illustrates the migration process from an on-premises data center to AWS. Continuous data transfer occurs from the source servers to replication servers within a staging area subnet on TCP 1500. Migrated instances reside in the target subnet. 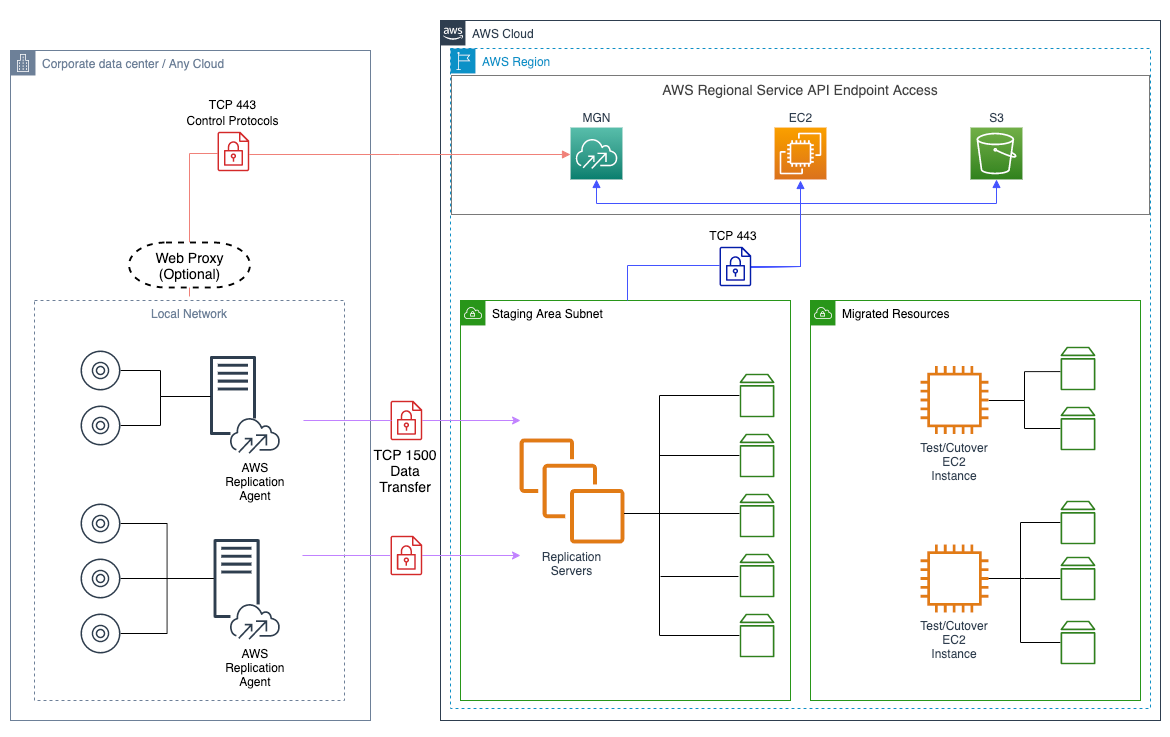 What is Cloud Migration Factory?

Cloud Migration Factory is an automation platform for migrating servers to AWS at scale with a factory-like approach. It helps customers with their medium-scale and large-scale migrations by automating manual processes, which are slow or complex to scale. It’s recommended for customers migrating more than 100 servers via AWS MGN, with the value significantly increased with the more servers you have to migrate.

To explain the value, let’s focus on deploying the replication agent, which is one of the early steps when migrating via AWS MGN. Installing the agent on one server takes about 5 minutes and is relatively straightforward. However, suppose you have 100 servers running both Microsoft Windows and Linux with 10 different target AWS accounts. In that case, there’s added complexity, and this process could take over 500 minutes in total. Cloud Migration Factory automation script reduces the agent installation time from 500 minutes to less than 5 minutes of operator time per migration wave. It works for both Windows and Linux operating systems. This approach is just one of the multiple steps that Cloud Migration Factory helps automate. Further, the Cloud Migration Factory is customizable, allowing you to edit existing automation or write your own to achieve specific outcomes for your business.

The factory consists of a serverless web application, which is deployed into your AWS account using AWS CloudFormation, and automation scripts. Once deployed, you can import your migration metadata (e.g. data from your migration plan about how and when servers will be migrated), and then orchestrate the processes using Cloud Migration Factory. CMF tracks migration progress on all migrations and provides reporting with Amazon QuickSight dashboards.

What is new with Cloud Migration Factory Version 3?

This section outlines some of the new features with version 3 of Cloud Migration Factory.

With version 3 of Cloud Migration Factory, we have redesigned the user interface from the ground up. The new user interface provides a similar look and feel to the AWS Management Console (see the following screenshot), and includes additional features discussed in this post. 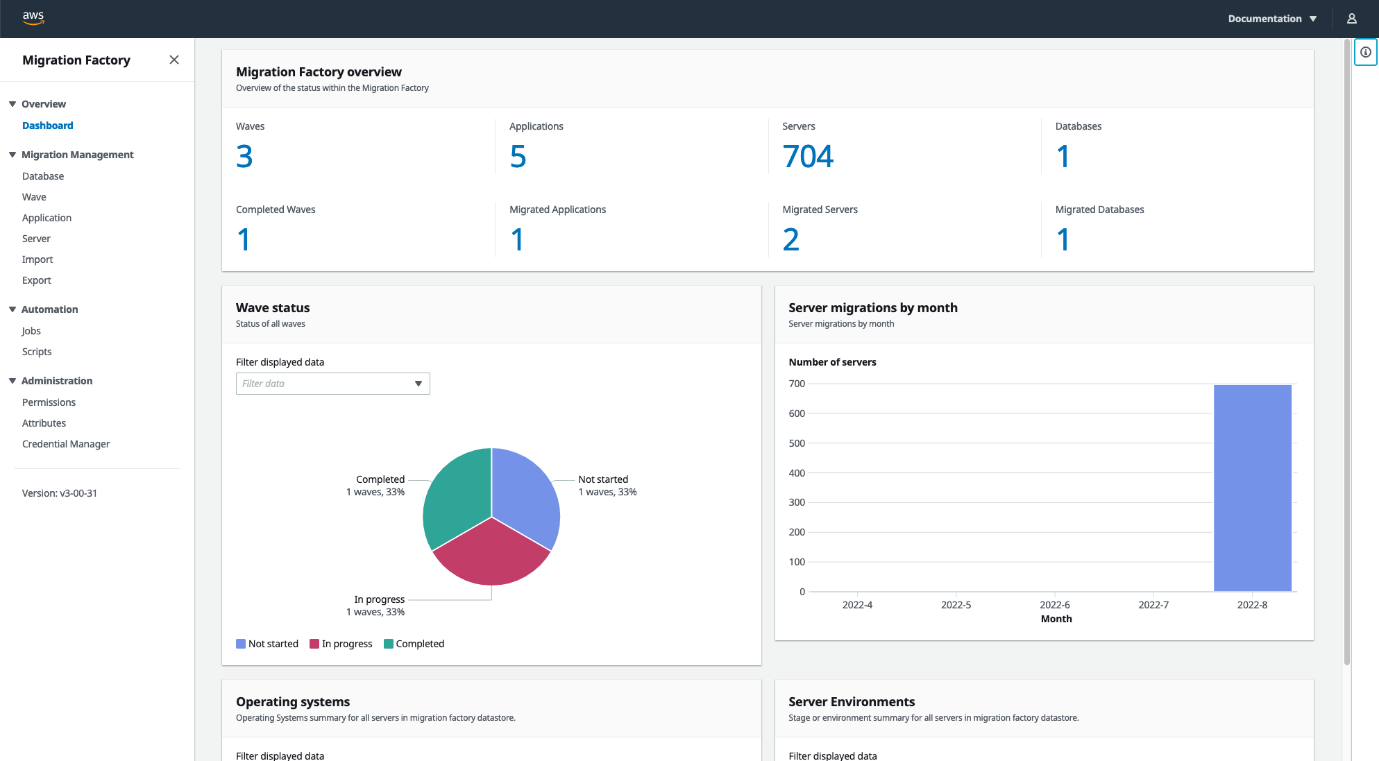 The following screenshot shows the “1-Install MGN Agents” automation script triggered from the Cloud Migration Factory console for all servers assigned to wave 1. Once submitted, an AWS System Manager run command is initiated on the automation server to run the selected script. This approach results in the automation server connecting to the source servers to install the replication agent, reducing the overall effort required to run a migration wave.

You can track progress and audit all tasks submitted from the Jobs page. This page enhances the traceability of actions and provides a single location to track progress across the entire migration. In the following screenshot, you can see that all jobs are now complete, and the user who initiated the job is outlined in the final column. 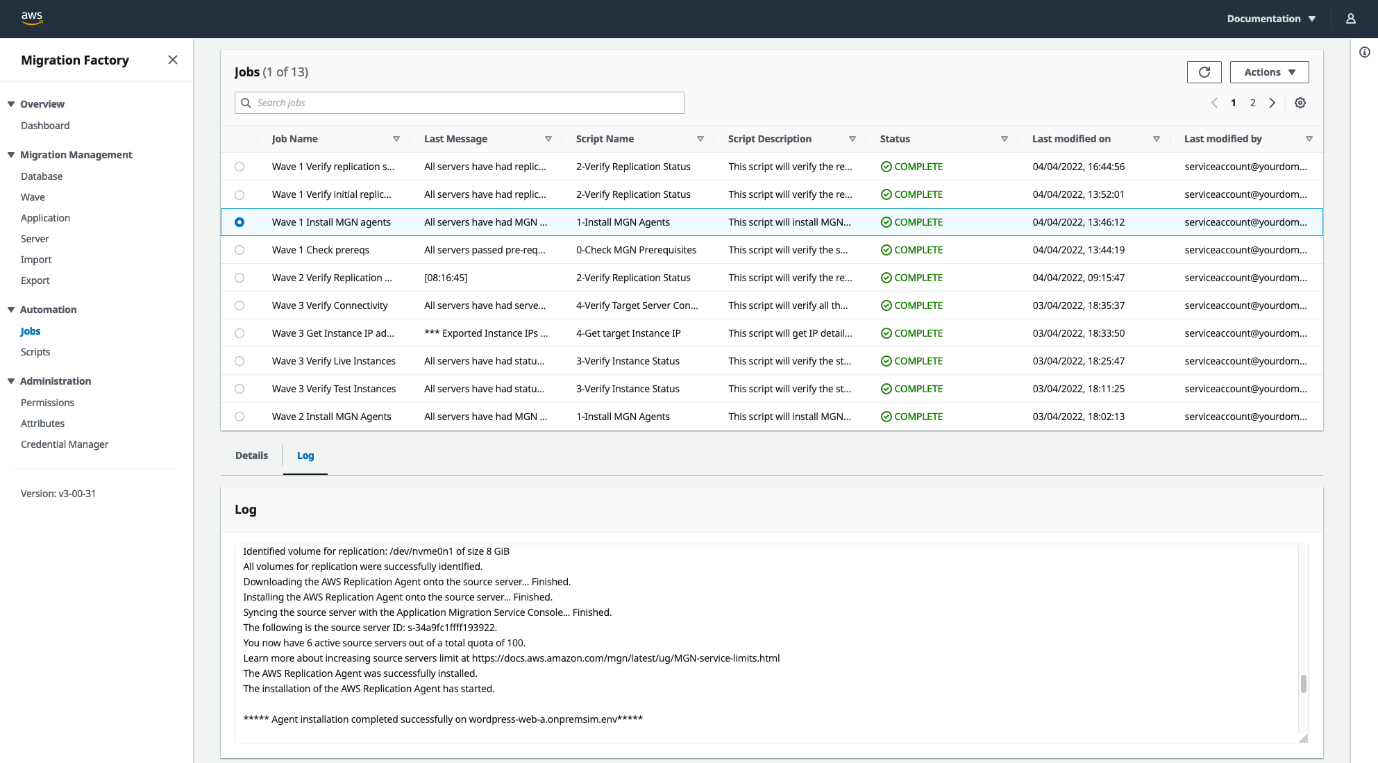 When running the automation across your in-scope estate, you must provide credentials, for example, authenticating from the automation server to the source migration servers. Cloud Migration Factory Version 3 now integrates with AWS Secrets Manager, allowing you to store these credentials and reference them directly in the user interface.

An important step when using Cloud Migration Factory (CMF) is to import your migration metadata into the factory so that your migration can be automated as intended. With version 3 of CMF, you can directly import your migration metadata CSV files or Excel spreadsheet within the user console. This provides a rapid method to import your data because the new UI is capable of uploading data about thousands of servers in a few seconds. To help prevent typos, all data uploads go through a validation process prior to committing. If required, you can also export all data directly from the CMF console to a .xlsx file.

Cloud Migration Factory v3 now supports role-based access control for attributes and actions. You can create a custom policy (shown in the following screenshot) by selecting the permissions you want to allow, adding the policy to a role, and adding users to the role. You can also create groups via Amazon Cognito, enabling you to simplify user management where you want to grant the same permissions to many users. All actions are recorded against the authenticated user, allowing you to audit actions performed within the factory easily.

I recommend visiting the following pages for further information:

If you have any questions, please email AWS Professional Services at migration-factory-support@amazon.com