Customers want to migrate their existing Prometheus workloads to the cloud and utilize all that the cloud offers. AWS has services like Amazon EC2 Auto Scaling, which lets you scale out Amazon Elastic Compute Cloud (Amazon EC2) instances based on metrics like CPU or memory utilization. Applications that use Prometheus metrics can easily integrate into EC2 Auto Scaling without needing to replace their monitoring stack. In this post, I will walk you through configuring Amazon EC2 Auto Scaling to work with Amazon Managed Service for Prometheus Alert Manager. This approach lets you move a Prometheus-based workload to the cloud while taking advantage of services like autoscaling.

Note that as you scrape more and more resources, you could quickly overwhelm the capabilities of a single Prometheus server. You can avoid this situation by scaling Prometheus servers linearly with the workload. This approach ensures that you can collect metric data at the granularity that you want.

This rules set creates a HostHighCpuLoad and a HostLowCpuLoad rules. These alerts trigger when the CPU is greater than 60% or less than 30% utilization over a five-minute period.

After raising an alert, the alert manager will forward the message into an Amazon SNS topic, passing an alert_type (the alert name) and event_type (scale_down or scale_up).

The Lambda code to support Auto Scaling is as follows:

The full architecture can be reviewed in the following figure. 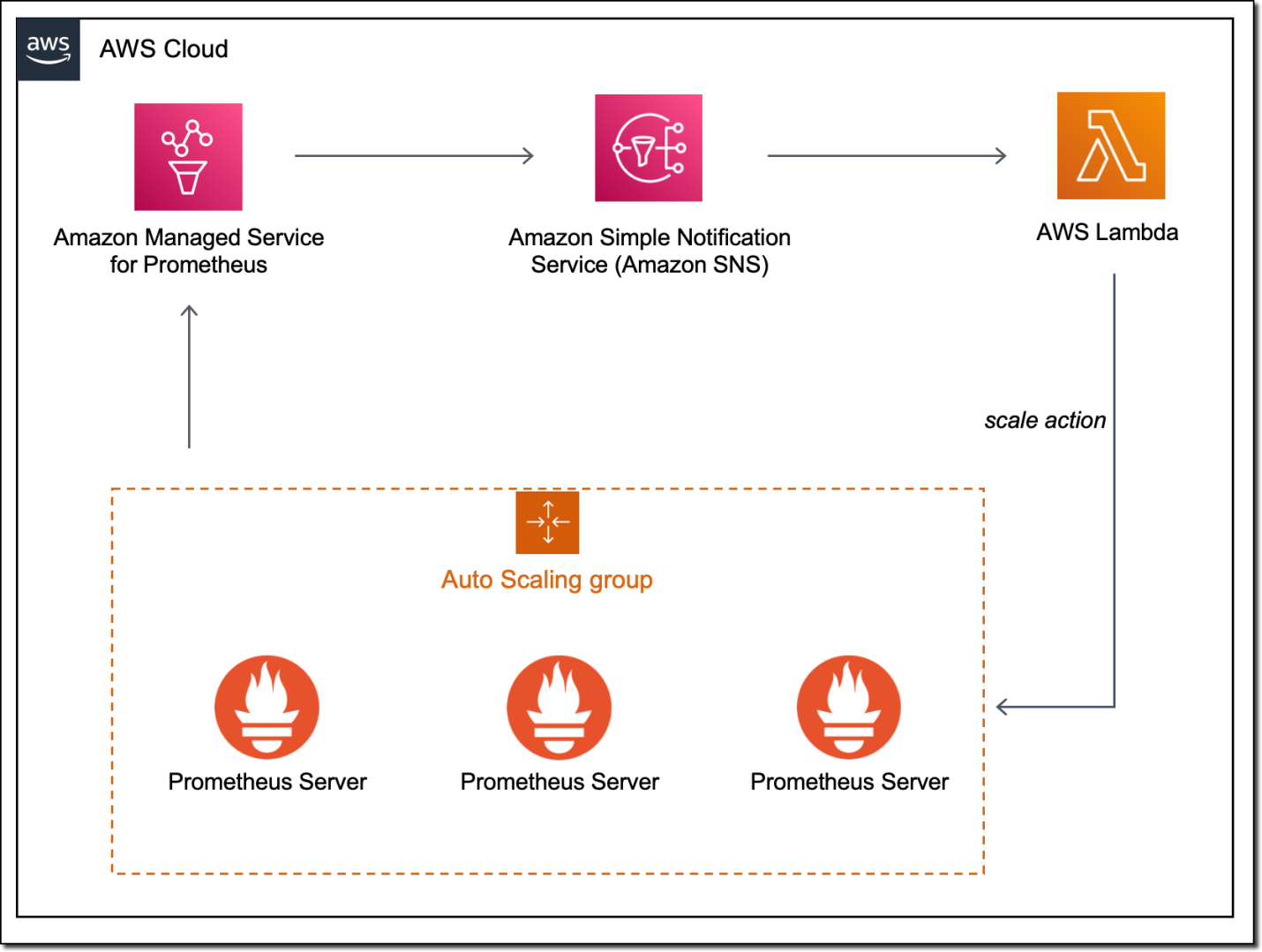 Testing out the solution

You can launch an AWS CloudFormation template to automatically provision this solution.

Select the Launch Stack button to set up the template in your account. As part of the configuration process, you must specify the subnets and the security groups that you want associated with the Amazon EC2 instances. See the following figure for details. 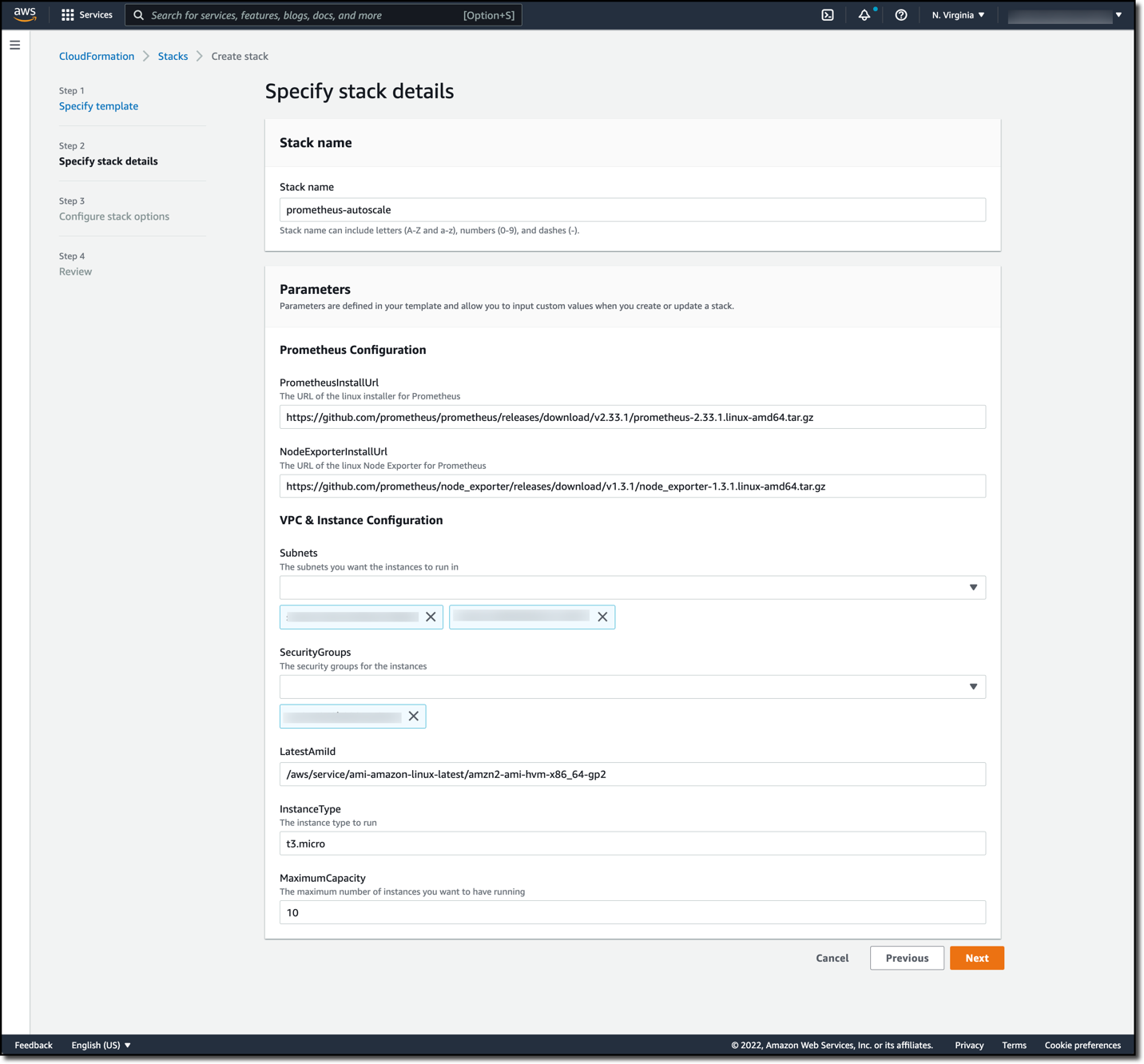 This is the CloudFormation stack details screen, where the stack name has been set as prometheus-autoscale. The stack parameters include a URL of the Linux installer for Prometheus, the URL for the Linux Node Exporter for Prometheus, the subnets and security groups used in the solution, the AMI and instance type to use, and the maximum capacity of the Amazon EC2 Auto Scaling group.

The stack will take approximately eight minutes to deploy. Once complete, you will find two Amazon EC2 instances that have been deployed and are running in the Amazon EC2 Auto Scaling group that has been created for you. To validate that this solution auto-scales via Amazon Managed Service for Prometheus Alert Manager, you apply load to the Amazon EC2 instances using the AWS Systems Manager Run Command and the AWSFIS-Run-CPU-Stress automation document.

Lambda is priced based on the duration of your function execution and the number of requests made to the function. See the latest AWS Lambda pricing details.

There are no additional charges for using Amazon EC2 Auto Scaling.

By using Amazon Managed Service for Prometheus, alert manager, Amazon SNS, and Lambda, you can control the scaling activities of an Amazon EC2 Auto Scaling group. The solution in this post demonstrates how you can move existing Prometheus workloads to AWS, while also utilizing Amazon EC2 Auto Scaling. As load increases to the application, it seamlessly scales to meet demand.

In this example, the Amazon EC2 Auto Scaling group scaled based on CPU, but you can follow a similar approach for any Prometheus metric from your workload. This approach provides fine-grained control over scaling actions, thereby making sure that you can scale your workload on the metric that provides the most business value.

For next steps, see how to create your own rules configuration file for Amazon Managed Service for Prometheus, and set up your own alert receiver. Moreover, check out Awesome Prometheus alerts for some good examples of alerting rules that can be used within alert manager.