AWS Control Tower helps customers put an orchestration layer on top of a multi-account strategy. When customers build applications, they often use separate accounts as part of a deployment pipeline so that they can validate changes before production. This best practice helps reduce blast radius should there be any issues with newer iterations.

With AWS Control Tower, customers can easily provision, govern, and manage AWS accounts at massive scale. Customers tend to build out AWS accounts like these as part of their multi-account strategy:

In this post, I will share how you can configure a cross-account deployment pipeline using AWS CloudFormation templates in the context of an AWS Control Tower environment.

Before you begin, you must create multiple AWS accounts to host the resources that make up the pipeline. For instructions, see Provision and manage accounts with Account Factory in the AWS Control Tower User Guide.

Although you can add more and edit the pipeline accordingly, here are the accounts you must use and perform the steps in this post: 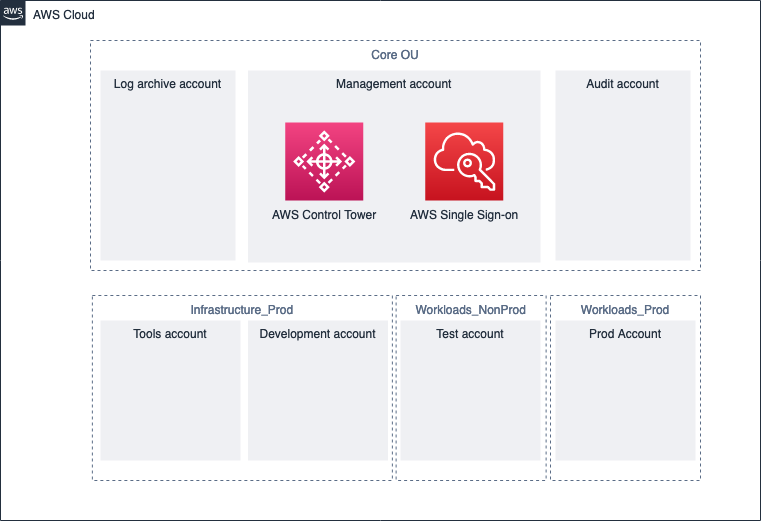 Step 2: Configure the CLI and obtain credentials from AWS SSO

This step is essential for obtaining credentials for each respective AWS account, so you can easily deploy the CloudFormation template to the account.

If you do not have the AWS CLI installed, follow the steps in the AWS Command Line Interface User Guide.

After you’ve installed the AWS CLI, use the aws configure sso command to configure the AWS CLI to obtain credentials using AWS Single Sign-On. To get the start URL, sign in to the AWS SSO console with the management account.

Set up SSO from the CLI for each AWS account. In the CLI profile name input, this is where you set up the profile (for example, MyDevAccountProfile):

Follow the steps outlined in the GitHub repository to create an AWS CodeCommit resource in your development account. Then push an AWS Serverless Application Model (AWS SAM) application to AWS CodeCommit.

Use the single-click-cross-account-pipeline.sh script to enter the profiles you created. This script will deploy resources to each of your AWS accounts.

In this post, I’ve shown you how to deploy a cross-account deployment pipeline to an AWS Control Tower environment to ensure you have isolated environments for development, testing, production, and shared tooling. Now you can use a central AWS account that orchestrates the continuous delivery of an application across these AWS accounts.