In this blog post, the automated reachability assessment solution is designed around an EC2 instance acting as a web server. This web server must always be reachable on port 80 and 443 from the public internet. To achieve this desired state of connectivity, the web server must be:

If any of these VPC elements are misconfigured, the webserver will not have connectivity from the internet on ports 80 and 443. Identifying the VPC connectivity properties that are required in order to achieve connectivity is the starting point for an automated reachability assessment solution. For this blog post, we will focus on detecting security group changes that cause connectivity to the webserver to fail. 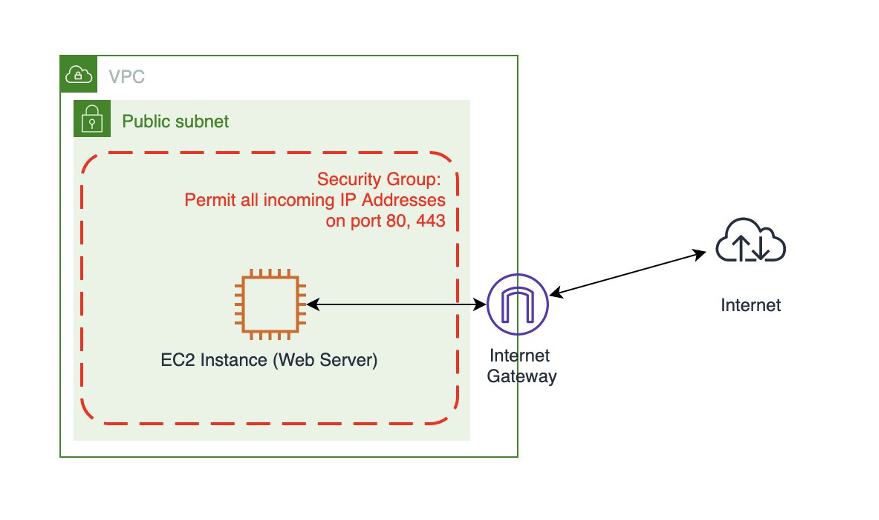 When a security group change is made, the change event is logged in AWS CloudTrail. CloudTrail then forwards the change event to Amazon EventBridge, which evaluates the change against a series of rules to determine if any actions must be taken. Within EventBridge, a rule will be created to forward all security group change events from CloudTrail to an AWS Lambda function. The Lambda function is responsible for determining if any EC2 instances are impacted by the security group change, and if any Reachability Analyzer paths assessing the connectivity from the internet to the instance exist. If so, the analyses will be restarted. If any of the analyses fail, a message is published from the Lambda function to an Amazon Simple Notification Service (SNS) topic. By implementing this architecture, AWS administrators will quickly be notified if a change in the network infrastructure causes connectivity to fail.

For the purposes of this blog post scenario, there are several infrastructure items that must be in place:

Once these resources are created, the infrastructure for automated reachability assessment must be created. This CloudFormation template can be used to create the entire infrastructure of this blog post, including the prerequisite infrastructure.

To perform automated reachability assessment, network paths must be manually created using Reachability Analyzer. As the instance in this blog post is acting as a webserver, paths must be created on ports 80 and 443, sourced from the IGW of the VPC, and destined to the webserver instance.

Step 1.1: Create a Reachability Analyzer path from the AWS Command Line Interface (CLI). This path verifies the webserver instance is reachable on port 80 from the public internet.

Step 1.2: Create a second Reachability Analyzer path from the AWS CLI. This path is identical to the first except it verifies connectivity on port 443.

2. Create the SNS topic and subscription for automated notifications

Step 2.1: Create a new SNS Topic. Record the Amazon Resource Name (ARN) of the new topic from the response to the command.

These Python code snippets outline the core pieces of the reachability assessment Lambda code. The full Lambda code can be found here. The code makes use of the boto3 package provided by AWS.

The get_security_group_id and check_security_group_event_name functions extract the impacted security group from the EventBridge event and verify that the event is applicable to the Lambda.

Once the security group has been determined, the get_affected_ec2_instances function is called. All instances in the AWS account with the security_group attached are retrieved through the boto3 describe_instances call.

Note: only the first 100 matching instances are returned in this example as a result of the ‘MaxResults’ parameter in the describe_instances call. To consider all instances, pagination must be implemented using the ‘NextToken’ parameter returned in the response to the API call.

This logic can be altered to fit different scenarios. For example, if the Lambda function was invoked because of a routing table change, the get_affected_ec2_instances function would instead search for EC2 instances residing in subnets associated with the affected routing table.

If there are any affected EC2 instances, the get_affected_reachability_analyzer_paths function is called. This function retrieves all Reachability Analyzer paths through the boto3 describe_network_insights_paths API call. The if-statement within the for loop provides the logic for the automated reachability assessment. The conditions in this statement determine the Reachability Analyzer paths that need to be re-analyzed given the change which triggered the Lambda function. In the case of a webserver, any paths sourced from an IGW and destined to one of the affected EC2 instances on ports 80 or 443 must be re-analyzed.

The logic in the get_affected_reachability_analyzer_paths function can be adopted to suit different scenarios. This could also be used for other scenarios, such as when an instance must be accessible using Remote Desktop Protocol from a bastion host in a different subnet. In order for this connectivity to be successful, routing tables must be present and configured to route traffic between the two subnets, and security groups and network ACLs must be configured to allow access to the instance from the bastion host only on TCP/UDP port 3389. In this case, the conditions described in the preceding function would be changed to search for Reachability Analyzer paths sourced from the bastion host and destined to EC2 instances that should always be accessible by the bastion host.

Once the code has been completed and saved in a Python file, a deployment package is created. The deployment package contains the application code and any dependencies. Once created, the package is uploaded and deployed as a Lambda function. In order to create the package, Python, pip, and a compression utility are necessary on the development machine.

Step 4.1: As Reachability Analyzer is a new AWS service, the commands have not yet been added to the boto3 package provided by the Lambda runtime. As a result, the latest boto3 package is included in the deployment package as a dependency along with the function code. This command installs the boto3 package in a local folder called ‘package’.

Step 4.2: Zip the package directory and add the Python file containing the function code to the archive.

Step 4.3: Place the JSON block in a file and save it as trust-policy.json. Record the ARN returned from the command for use later.

Step 4.4: Create the IAM role for the Lambda function using the AWS CLI. Be sure to note the ARN from the output returned by the command.

Step 4.7: Place the JSON block in a file and save it as cloudwatch-permissions.json. This policy will grant the Lambda function permission to publish logs to Amazon CloudWatch Logs.

Step 4.8: Attach the policies to the role using the AWS CLI.

Step 4.9: Deploy the Lambda function using the AWS CLI. Replace the <SNS_TOPIC_ARN> placeholder with the ARN of the SNS topic created earlier. Replace the <ROLE_ARN> with the ARN of the Lambda role created earlier. This command will deploy the code to AWS Lambda with the role created in this section, a timeout of 60 seconds, and a single environment variable. Note the FunctionArn in the returned output for use later (that is, arn:aws:lambda:<region>:<account>:function:ReachabilityAssessment).

Amazon EventBridge is a rules-based engine that triggers actions based on events received from AWS services. One of the supported AWS services that interacts with EventBridge is CloudTrail. As user management activities are performed, CloudTrail will deliver the events to EventBridge where actions are taken based on a set of rules. In this case, any security group changes will trigger the automated reachability assessment Lambda function. To accomplish this, an EventBridge rule must be created which matches all security group change events. Once matched, the rule will forward the event to the reachability assessment Lambda function.

This rule will be created within EventBridge. This rule matches any security group change event from CloudTrail. Only a single event in the ‘eventName’ array must be present in the event delivered from CloudTrail in order for the rule to be considered matched.

Step 5.1: Create the EventBridge rule using the AWS CLI.Record the ARN returned in the response to this command for use later.

Step 6.1: To begin, the security group created in the prerequisite infrastructure section will be modified to revoke access on port 443 from the internet. This change will cause one of the Reachability Analyzer path analyses to fail, and a message will be published to the SNS topic. Shortly after, an email will arrive in the subscriber’s inbox describing the instances that have failed reachability assessment.

Step 6.2: Next, the security group is modified to restore inbound access on port 443, however, only hosts with an IP address in the 192.168.1.0/24 subnet are accepted. As a result, the reachability assessment will fail as the instance is not reachable from the internet, and another email is sent to the subscriber’s inbox.

Step 6.3: Finally, the security group is modified to restore inbound access on port 443 for all traffic. The reachability assessment Lambda still runs as a result of this change, however, no email is sent as the reachability requirements are satisfied.

Try it yourself with the CloudFormation template:

Get Started with VPC Reachability Analyzer:

Jacob is an Associate Cloud Developer at AWS focused on helping customers create applications designed for the cloud and design infrstructure which allows for automated and consistent deployments. In his free time, Jacob likes exploring local Seattle cookie shops.

Justin Lau is a Solutions Architect, supporting enterprise customers at AWS in the Southern California region. Passionate about learning and experimenting, he has a goal of making AWS Cloud simpler for everyone. In his free time, Justin likes camping, sleeping outside and spending a vacation nights in a tent.