There are many services that help you configure network security within your Amazon Virtual Private Cloud (VPC), including security groups (SGs), network access control lists (network ACLs), and the AWS Network Firewall. These services inspect and filter network traffic, but they do not apply to DNS queries provided by Route 53 Resolver, potentially allowing bad-actors to exfiltrate data using DNS. A DNS lookup is an integral part of outbound network communication and is typically used as a starting point for establishing outbound connectivity.

With DNS Firewall, customers protect against data exfiltration attempts by building rules, specifying a list of domains to filter, and configuring actions for each rule to take when listed entries are queried. Customers group these rules together known as rule groups. Additionally, customers use AWS managed domain lists to easily apply rules to known bad domains.

It’s easy to manage these rules and policies in a small number of AWS accounts. However, when managing policies at scale with hundreds or thousands of VPCs across multiple AWS accounts, we recommend using AWS Firewall Manager, which can centrally manage and apply policies across the AWS Organization. Together with AWS Network Firewall, customers can perform domain-filtering across HTTP/S traffic, centrally managed from AWS Firewall Manager.

In this post, we’ll focus on DNS Firewall rules and rule groups, both at an individual account level and from a centralized location, by using AWS Firewall Manager to enforce security controls in order to safeguard domain lists against inadvertent changes that could result in DNS data exfiltration.

By default, queries that are issued within the VPC are directed towards the Route 53 Resolver service to handle the resolution, which has the VPC CIDR address +2. For example, the DNS Server on a 10.0.0.0/16 network is located at 10.0.0.2. This VPC CIDR +2 acts as a gateway endpoint to a shared resolver service represented by zonal fleets of resolver instances. This shared resolver service is known as Route 53 Resolver, and it provides DNS query capability in your VPC that resolves public domain names and private hosted zones (PHZ).

When a DNS query is issued, the following resolution process is followed:

It is important to note, Route 53 Resolver does not use the Internet Gateway (IGW), Security Groups, or network ACLs attached to your VPC to resolve public DNS zones. That means DNS queries will be resolved even if the VPC does not have an Internet Gateway attached, or a route to the internet. DNS Firewall is applied at the Route 53 Resolver, giving you the ability to configure rules to protect your infrastructure. 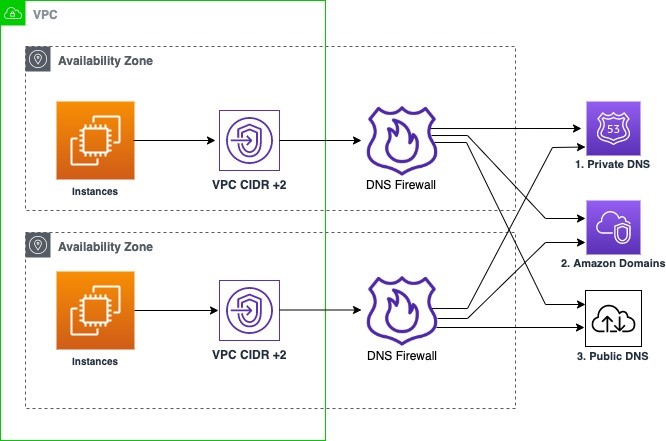 DNS Firewall is made up of the following components:

Rules – A DNS Firewall rule specifies a single domain list and action to take when the DNS domain query matches a domain in the domain list. You can allow, block, or alert on the matching queries. Each rule has a unique priority in the rule group, and rules are processed from lowest priority to highest priority.

Domain List – A domain list can be reused across many rules, but a single rule has only one domain list. You specify domains in a domain list, associate them with a rule, and provide an action to take (allow, block, alert) when any of those domains are matched in the DNS query. You create your own domain lists or use AWS managed domain lists.

Rule Group – A DNS Firewall rule group is a collection of rules that define how to inspect and handle DNS queries. A rule group can be associated with many VPCs, hence providing protection to multiple VPCs in an AWS account. With AWS Firewall Manager, you apply this rule group to VPCs across your organization and centrally manage it from an AWS Firewall Manager administrator account, which will be discussed later.

Capacity Units – Each rule group includes up to 100 rules. Within each rule, you specify a domain list that can have multiple domains defined. Additionally, you can attach multiple rule groups to the VPC. 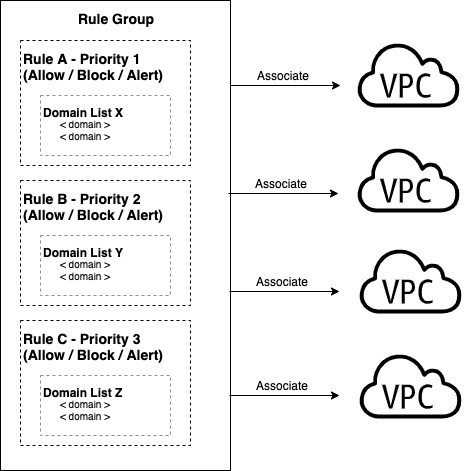 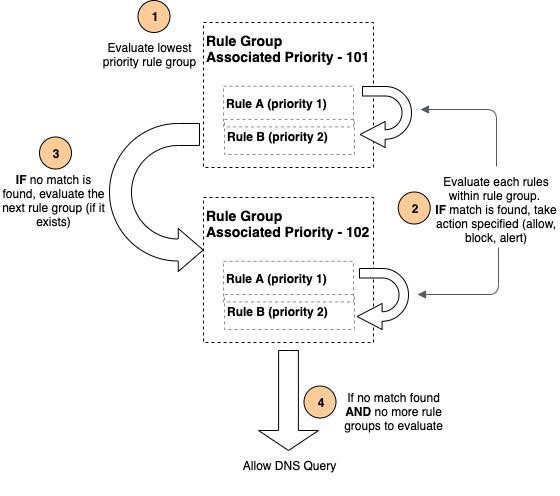 Managing DNS Firewalls begins inside the VPC Console under DNS Firewall. When you navigate to the rule groups, you are presented with a list of DNS Firewall rule groups that are configured within the selected Region. DNS Firewall Rule Groups are a Regional construct (meaning that it applies to one Region only). Rule groups will be created in different Regions, if required.

First, you’ll add a rule group, which is a collection of rules with actions to block or allow specific DNS queries. Specifying a meaningful name and description will help to easily identify the rule group in the future. Next, you add rules to the rule group. A rule defines how to filter DNS network traffic. Rules define the domain names to look for and the action to take when a DNS query matches one of the names. You specify an existing domain list, an AWS managed domain list, bulk upload a domain list, or create a new domain list directly from within the wizard. 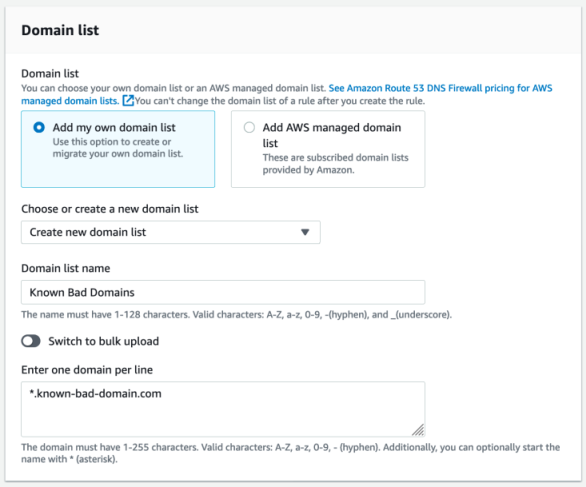 You then specify an action to take when the rule group has been matched. Choosing the Block action allows you to specify the type of response, whether that be NODATA, NXDOMAIN or OVERRIDE with a custom DNS record value response. 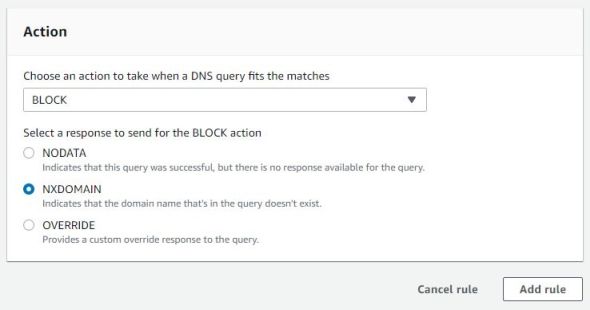 Figure 5: Specifying an action within the Add Rule Group wizard

After the rule group has been created, it can then be associated with VPCs. After association, DNS Firewall will take effect.

VPCs can be associated with multiple rule groups. Rules and rule groups are evaluated in order of priority, with the lowest number being evaluated first.

As described earlier in this post in the section about DNS Firewall concepts, the DNS Firewall allows all DNS requests by default. For a workload that has well-defined requirements for outbound communication, customers may opt to block all DNS requests except for specific allowed domains. To achieve this, you can create a *. rule in a rule group, with a block action. This rule group must have a higher number (lower priority) than the other rule groups associated to the VPC.

Complete the following prerequisites before you create and apply a Firewall Manager policy:

Figure 6: Getting started with the AWS Firewall Manager 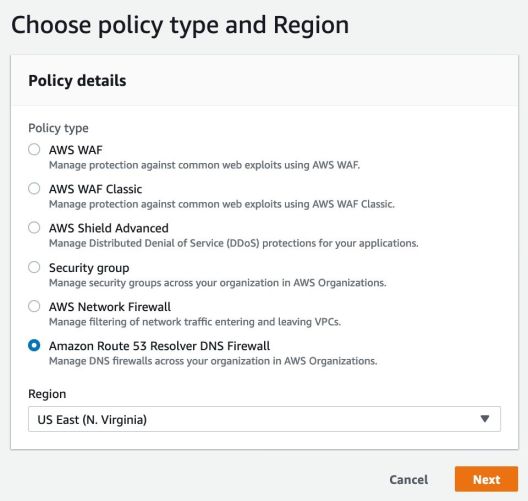 Next, we’ll specify the DNS Firewall rule groups, that will be applied via this policy.

AWS Firewall Manager is able to apply additional higher and lower priority DNS Firewall rule groups, across VPCs, within the scope of the policy. For example, consider that you have identified a bad-domain, that must be blocked across all VPCs within your AWS Organization. You can use AWS Firewall Manager to apply that rule group before evaluating individual rule groups defined within member accounts across the AWS Organization.

The evaluation sections and priority numbers are:

Within each section, rule groups are evaluated based on the priority number assigned to it. Rule groups with the lowest priority are processed first. 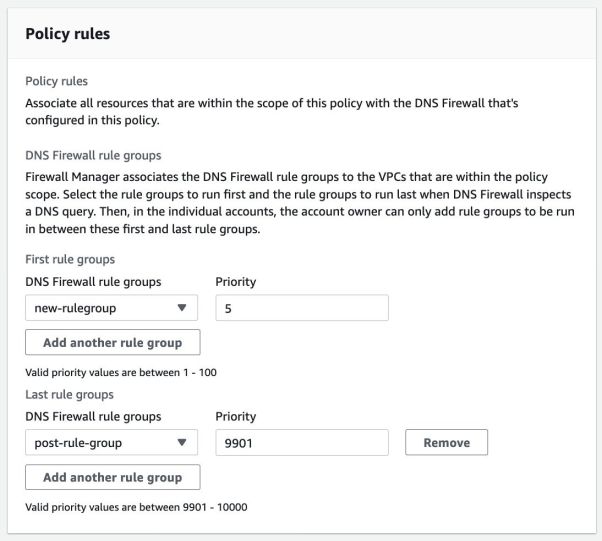 Next, we specify the scope of the policy, and the VPCs that we want the policy to apply to. For example; you may have different policies to apply against different networks, environments, or different organizational units. You can apply the policy to all VPCs within the AWS Organization, or you can be specific with inclusion or exclusion of VPCs using resource tags. 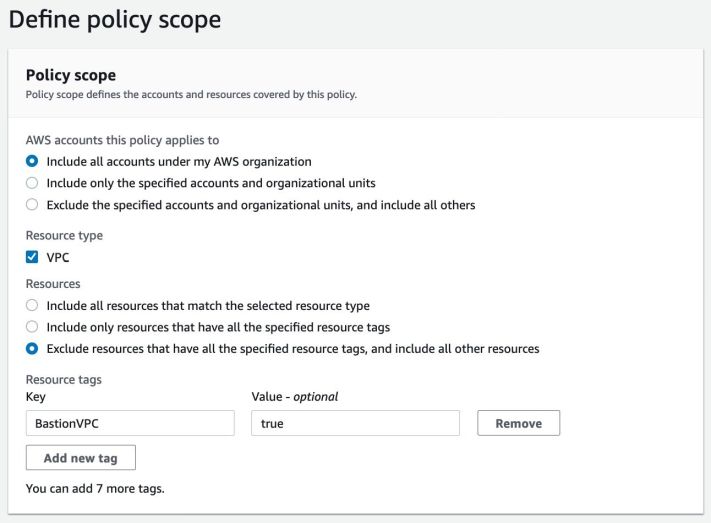 It’s recommended to use different priority numbers for rule groups. Rule group priority conflicts occur in either of the following cases:

Route 53 Resolver Query Logging now expands its functionality by logging queries in response to DNS Firewall rule actions. Query Logging is a feature that’s enabled at the VPC level. You can configure it to log recursive DNS queries originating from within the VPC DNS query logs to Amazon S3 bucket, Amazon CloudWatch Logs, or Amazon Kinesis Data Firehose Delivery Stream. You then use this information for troubleshooting and security operations to have a better view of security posture.

There are fields added to the logs that provide insight into DNS Firewall actions against DNS queries:

Once a DNS Firewall rule group is associated with a VPC, it begins to send metrics to Amazon CloudWatch. There’s a AWS/Route53Resolver namespace that includes metrics all revolving around query volume:

As part of the walkthrough, you also learned how compliance auditors use Firewall Manager to see, in a single place, if DNS firewall policies are in compliance across the AWS Organization.

If you have questions about this post, start a new thread on the Amazon Route 53 forum or contact AWS Support.

Mahmoud is a Technical Account Manager based in Melbourne, Australia specializing in Networking. Prior to joining AWS, he worked for some of the biggest Telco providers in Australia. He has a passion for learning new technology and helping customers achieve operational excellence. In his spare time, he loves spending time with family and playing sport.

Mike Bentzen is a Solutions Architect based out of Brisbane, Australia specializing in Networking & Cloud Infrastructure. He has a Bachelor of Information Technology majoring in Software Architecture. He’s passionate about helping customers build and deliver scalable, highly available, and well-designed cloud solutions with great outcomes.