Many developers and data engineers use Managed Workflows for Apache Airflow (Amazon MWAA), a managed service for open source Apache Airflow, to programmatically author, schedule, and monitor workflows. With Amazon MWAA, you can focus on business logic and build workflows without worrying about the management responsibilities such as setup, patching, upgrades, security, scaling, and so on. Adopting CI/CD and the best practices from the Operational Excellence pillar can help address risks in an environment, and limit errors from manual processes. More importantly, they help free data scientists and data engineers from the related manual processes, so they can focus on building workflows, differentiating an organization, and accelerating the flow of valuable changes into production.

In this blog post, we explain how to automate deploying workflows (Directed Acyclic Graphs, or DAGs) to an Amazon MWAA environment. First, we explore how to sanity-test DAGs, identify issues with dependencies, and apply unit tests so that you get feedback on workflows quickly and avoid unnecessary deployments. Second, we explore how to create and update the MWAA environment through infrastructure as code (IaC) as changes are detected.

The following diagram shows the high-level process flow for the CI/CD pipeline, which is built using AWS CodePipeline, a fully managed continuous delivery service. The pipeline automates the build, test, and deploy phases of the release process every time there is a code change, based on the release model you define. The build and test phase of the pipeline is handled by AWS CodeBuild, a fully managed continuous integration service that compiles source code, runs tests, and produces software packages that are ready to deploy using the build commands from buildspec.yaml. 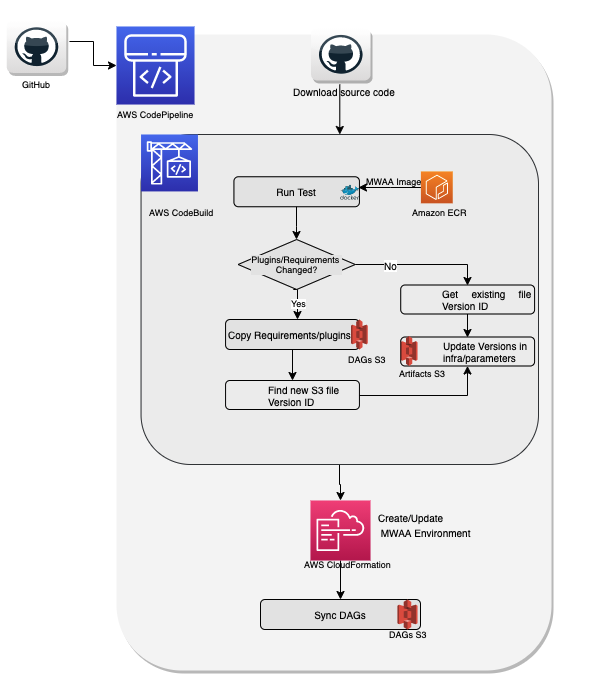 Setting up the pipeline

The first step in automating the CI/CD process for the workflows is to build the pipeline as infrastructure as code. Create a stack using infra/pipeline.yaml by following the instructions in the GitHub repo to build the pipeline. It creates an AWS CodePipeline pipeline with GitHub as source, AWS CodeBuild job, an artifact bucket in Amazon Simple Storage Service (Amazon S3), and a few AWS Identity and Access Management (IAM) roles necessary for the pipeline to work.

The five high-level steps run as part of the deployment process for a workflow are:

The first three steps are covered in the build/buildspec.yaml. AWS CodeBuild runs this file as part of the build job. The CodeBuild job starts with testing the DAGs, plugins, and requirements.txt using MWAA local runner. When the tests are successful, it moves on to find whether there are changes in requirements.txt or plugins from the last commit. Then it moves on to copy the plugins and requirements.txt to the Amazon S3 bucket. Finally, it copies the template.yaml and the corresponding parameter file to the pipeline artifact bucket.

The fourth and the fifth steps in the CI/CD process are handled by AWS CodePipeline. The pipeline runs the change-set using the infra/template.yaml copied from the last step. It automatically handles creating or updating the MWAA environment. Remember, updates happen only when there are changes in the plugins or requirements file.

The fifth and final step is copying the DAGs to an Amazon S3 bucket. DAG changes are immediately reflected to the MWAA environment, whereas changes to plugins and the requirements file require an environment update. So, if your DAGs have dependency with plugins and requirements file, the DAGs will not function properly until the environment is updated. To avoid this issue, the deployment of DAGs to an Amazon S3 bucket is done as the last step in the pipeline.

In the CI/CD process described previously, the last three steps are common pipeline steps. Thus, I will cover the first two steps, which are unique to Amazon MWAA and Apache Airflow next.

Whether you are building an application or a data pipeline, testing is an integral part of development. Tests should be done in layers. DAG integrity tests check the validity of all DAGs. Unit tests validate small individual units of work. Integrations tests validate the pipeline as a whole.

Although you can build these layers with any CI/CD tooling, this blog post covers only DAG integrity tests and unit tests, which are written in the Python built-in unittest framework. You can choose to write in other testing frameworks, such as pytest.

Tests are done in the MWAA local runner, which is similar to an MWAA production image, so it confirms that your workflow running in Amazon MWAA works fine.

After you have built the image, you get an image ID, which you can use to tag and push the image to a container registry. I used Amazon Elastic Container Registry (Amazon ECR) to host the built images.

Use the following command for pushing to Amazon ECR. If you are using a different container registry, make sure to update the build/local-runner.py.

Let’s make a quick code change to dags/hello-mwaa.py by modifying the print_hello function:

Let’s review the details of the testing done by build/local-runner.py.

With many versions of libraries, introducing an incompatible package version in the requirements file and getting the Airflow environment stuck is easy. Hence, Airflow recommends using a constraints file; learn more in the MWAA documentation.

Also, any updates to the requirements file need the MWAA environment updated, which can take 20–30 minutes. Thus, identifying issues with dependencies during the build process is important.

I have a dependency test in test/dag-validation.py like the following, which checks whether the requirements file has a constraints file and then launches installation of requirements.txt in the MWAA local runner to identify issues. If there are issues or the constraints file is missing, it returns failure.

The term integrity test is popularized by the blog post “Data’s Inferno: 7 Circles of Data Testing Hell with Airflow”. It is a simple and common test to help DAGs avoid unnecessary deployments and to provide a faster feedback loop. It confirms that DAGs are syntactically correct, there are no Python dependency errors, and there are no cycles in relationships.

The following checks are performed in test/dag-validation.py:

Additional helpful tests followed in the community during the integrity tests include:

Unit tests ensure that each smallest part of the workflow is tested in isolation, which in DAG’s case is mostly operators and sensors. You can also assert the number of tasks in the DAG, verify relationship between the tasks, and validate input and output of the tasks. If there are custom sensors or operators, you can verify the correctness of the custom operators/sensors functionality.

Because the unit tests are done in isolation, when there are connections to the external services—for example, the DAG is performing a task in Amazon Elastic Kubernetes Service (Amazon EKS) or getting data from an Amazon Redshift cluster—you can use mock libraries to mock the external services. The Python unittest framework provides a mock library called unittest.mock with which you can create mocks or stubs and assert input arguments or return values to make sure that your code is integrating with the external service correctly.

Airflow has a built-in plugin manager that allows you to drop an external component to customize an installation. With Amazon MWAA, the plugin is packaged as a ZIP file and dropped into the @AIRFLOW_HOME/plugins folder. The requirements file allows you to install Python dependencies that are not included in the Apache Airflow base install of your MWAA. Both the plugins and requirements file are required to have version numbers associated if they are configured in the MWAA environment.

Whenever the plugins or requirements files are updated in the Amazon S3 bucket, the new version ID of the files must be updated in the MWAA environment for the changes to take effect. This environment update takes 20–30 minutes. Thus, incorporating testing in your deployment to get faster feedback on issues and triggering the update only if the requirements or plugins are changed is important.

As I highlighted previously, we should not instigate an MWAA environment update for DAG changes. We must identify whether the plugins and requirements files are changed from the last time the build successfully ran. The high-level steps follow, and you can find them in infra/plugin-versioning.py:

Amazon MWAA takes away the operational responsibility so you can focus on building workflows. By following guidelines described in this post to automate deploying your DAGs to an Amazon MWAA environment, you can build quality DAGs and deploy them faster.

In this post, we explained how to build an automated CI/CD pipeline to accelerate deploying workflows, and we described how to automate tasks, including updates to plugins and requirements files. You can deploy the CI/CD pipeline and related code to your own AWS account using instructions found in the GitHub repository.