In this blog post, we’ll show an end-to-end workflow for using open source tools with AWS IoT Greengrass version 2 to visualize ML inference results in near real-time on an edge device.

In many anomaly detection and object classification applications, users want to visualize the ML inference output at a local edge machine with a real-time dashboard tool so they can review, approve, or intervene in the ML inference outcomes. With a near real-time business intelligence (BI) tool at the edge, the operational technology team can consume the ML outputs in a timely manner and make appropriate business decisions.

In this article, we present a workflow showing how to implement a CV ML application with visualization at the edge with two open source tools: InfluxDB and Grafana. For demonstration purposes, this setup uses a previously trained Resnet-18 classification model published on PyTorch to classify objects of 1000 categories. This pretrained model is further compiled with Amazon SageMaker Neo and is deployed as an edge inference component with Greengrass.

A second component is developed to visualize ML inference results at the edge using InfluxDB and Grafana. These open source tools are able to achieve high-speed ingestion and visualization of time-stamped image data in near real time.

The data transfer and communication between these two customer components is accomplished via interprocess communication (IPC) with AWS IoT Greengrass v2. In this setup, the CV ML component first publishes the inferencing result to the Greengrass IPC broker. A subscriber is listening on the same topic to which the ML inferencing script publishes, and the received inference result is then written to InfluxDB, and finally displayed on the predictive dashboard with image plugin by Grafana.

The following walkthrough contains detailed steps to develop this image visualization workflow with open source tools at the edge. No specialized ML experience is needed to follow this example and build the described workflow.

The following image shows the solution architecture for this edge workflow. Two user-defined components, ML inference and IPC message subscriber with data entry to InfluxDB, are deployed with AWS IoT Greengrass v2 at the edge. Once the time-stamped ML inference data is written to InfluxDB, a table type Grafana dashboard is built to filter and display ML inference results.

In this example, we used an Ubuntu 18.04 LTS EC2 instance with the Greengrass v2 runtime to simulate an edge device with the AWS IoT platform. 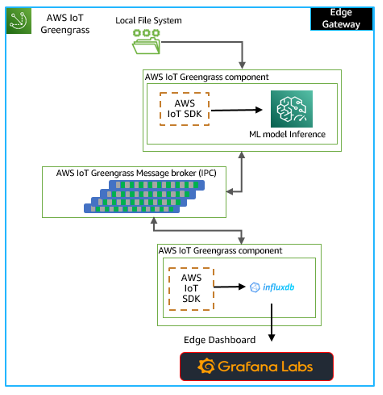 In the following sections, we will cover four steps:

The source code for each component is hosted in a GitHub repository.

The following prerequisites are necessary to complete the setup as described:

To start, you must set up an Amazon EC2 instance of type c5.xlarge with Ubuntu 18.04 base image in the AWS account with the following user data:

After the EC2 instance’s status changes to running, follow the instructions to set up AWS Systems Manager Session Manager Access role to access this EC2 instance without SSH.

Finally, you must install the AWS Command Line Interface (CLI) v2 on the Amazon EC2 instance:

To connect with the Amazon EC2 instance via the AWS Systems Manager Session Manager, complete the following steps:

If the Connect option under Session Manager is not available, you’ll need to refer to the tutorial and update the policies to allow you to start sessions from the Amazon EC2 console.

Next, copy the greengrass_install.sh script provided by the GitHub repo to the home directory on your EC2 instance.

Greengrass should show active status similar to the following example:

Figure 2: Greengrass should show active status similar to this output.

You also can check the Greengrass Core device status from the AWS IoT Greengrass console in your specified AWS Region as shown in the following image:

Set up InfluxDB credential and bucket

To start, install InfluxDB 2.0 and Grafana v8.0.4 on this Amazon EC2 instance by following the GitHub instructions.

Before writing data to InfluxDB, you must configure a user credential and a bucket. InfluxDB v2.0 stores time series data in the bucket for a given retention period, and it will drop all points with timestamps older than the bucket’s retention period. Because of limited disk space of the edge device, we recommend you do not use the infinite retention period.

InfluxDB also needs user authentication for single unified access control. You can configure InfluxDB with InfluxDB CLI with this command in SSM as:

Next, configure InfluxDB with the following prompted hints:

After the initial setup is finished, the user profile and database configuration will be used in step 3 for the Greengrass subscriber component to write data points to InfluxDB.

Finally, you must set up a connection configuration profile and set it to active to use the Influx CLI to query data securely:

Set up Grafana dashboard with port forwarding for Session Manager

Because of the limited length of this blog post, only the port forwarding function for AWS SSM is configured here to prevent anonymous access to the Grafana application at the edge. As noted in New – Port Forwarding Using AWS System Manager Session Manager, port forwarding allows you to create tunnels securely between your instances deployed in private subnets, without the need to start the SSH service on the server, to open the SSH port in the security group, or the need to use a bastion host.

In this example, the pretrained PyTorch Resnet-18 is compiled with Amazon SageMaker Neo for inference. SageMaker Neo automatically optimizes machine learning models for inference on cloud instances and edge devices to run faster with no loss in accuracy.

To do this, start with a machine learning model already built with DarkNet, Keras, MXNet, PyTorch, TensorFlow, TensorFlow-Lite, ONNX, or XGBoost and trained in Amazon SageMaker or anywhere else. Then, choose your target hardware platform, which can be a SageMaker hosting instance or an edge device based on processors from Ambarella, Apple, Arm, Intel, MediaTek, Nvidia, NXP, Qualcomm, RockChip, Texas Instruments, or Xilinx.

With a single click, SageMaker Neo optimizes the trained model and compiles it into an executable. The compiler uses an ML model to apply the performance optimizations that extract the best available performance for your model on the cloud instance or edge device. We use SageMaker Neo with AWS IoT Greengrass for the following reasons:

In this step, we will launch a lightweight SageMaker notebook instance to go through the procedure of compiling a PyTorch Resnet-18 model with SageMaker Neo service.

Components are building blocks that allow easy creation of complex workflows, such as ML inference, local processing, messaging, and data management. Components running on your core device can use the AWS IoT Greengrass Core IPC library in the AWS IoT Device SDK to communicate with other Greengrass components and processes.

The following steps show how to deploy the previous packaged ML model as an edge inference component on Greengrass v2.

This Bash script takes approximately 10 seconds to finish. When it finishes, confirm that you have the component created in your AWS IoT Greengrass v2 console as shown in the following image:

Step 3: Create the subscriber and data entry to InfluxDB component

For the base64 string containing the image output from ML inference component, a prefix is added to the data before writing it to InfluxDB as:

To configure the InfluxDB bucket as a Grafana data source, complete the following steps:

To build a table type dashboard for ML inference outputs, do the following:

This Grafana dashboard also helps users monitor ML model performance of each inference by clearly showing model type, inference duration, probability of the inference, and final prediction result. This workflow can be further enhanced as human-in-the-loop workflow, so the inference results can be used as future training data to improve the ML model accuracy.

You also must perform these clean up steps in the following areas.

Open the AWS IoT Core console. Under AWS IoT, do the following:

These steps complete the deletion of the resource created for this example.

This article shows an end-to-end workflow for using open source tools (InfluxDB and Grafana) to visualize ML inference results in near real time on an edge device. The latest AWS IoT Greengrass v2 reduced complexity of this IoT edge workflow by providing an IPC library to allow communications between different edge modules, so open source tools can be integrated easily with other ML components in an edge workflow.

With InfluxDB’s time series database, image files can be written to it as time-stamped base64 string data, queried with the Flux tool, and visualized by Grafana in near real time. This workflow can significantly improve the user experience of IoT edge ML applications and help the operational technology team achieve remote monitoring of ML at the edge.

This ML edge workflow can also be extended for different database and BI tool combinations (for example, InfluxDB and Prometheus, MySQL and Grafana, RedisTimeSeries, and Grafana, etc.). Users can also adapt the subscriber component and utilize different tools for their specific use cases.

In this article, we mainly focused on the improved modularity function of AWS IoT Greengrass v2; however, other features for Greengrass can benefit edge workflow development. For example, Amazon SageMaker Edge Manager is now integrated with Greengrass to simplify ML fleet deployments. For more details, please refer to this document.

In the future, other customer components, such as camera data ingestion, and image preprocessing and enhancement, also can be developed as individual modules and be integrated with this existing edge workflow to build more robust CV ML edge applications.