Mars Rover 2020 gets its name: Perseverance 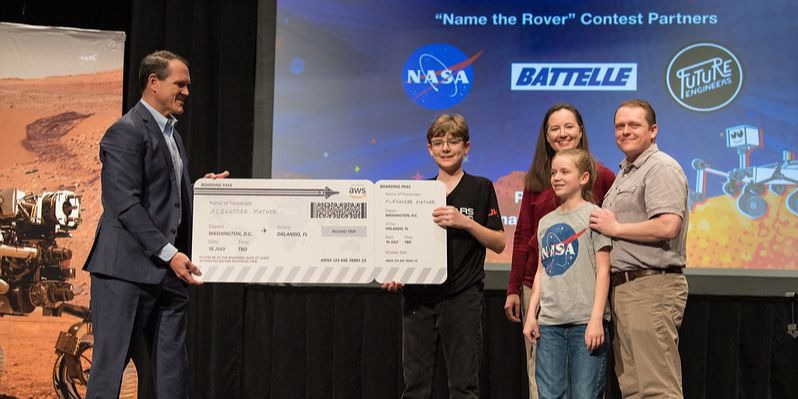 Over 28,000 school age children across the United States competed to name the Mars Rover 2020, but only one student’s name persevered. When the Mars Rover 2020 launches in July 2020 from Cape Canaveral Air Force Station in Florida, it will be named Perseverance.

In following the tradition of previous Mars Rovers, such as Curiosity, Spirit, Opportunity, and Sojourner, being named by kids, so has the Mars 2020 Rover. A seventh grader from Northern Virginia won the contest after submitting his name and a 150-word essay to NASA via the Mars 2020 Mission – Name the Rover Contest website. Winner Alex Mather, from Lake Braddock Secondary School in Burke, Virginia, and his family will be onsite to watch Perseverance launch in July 2020 in Cape Canaveral, Florida.

As part of his winning name entry, Alex wrote an essay about how he was inspired by a trip to space camp in Alabama two years ago. In his essay, he wrote about his idea for the Mars Rover name: “We have the spirit to pursue opportunity, we are full of curiosity, and we have the insight to grow as a species,” he said. “The list [of past rover names] was good, but it felt like it was missing something. It was without the single most prominent characteristic in human beings—perseverance, the ability to keep on pushing the limits and to recover in the face of tragedy.”

The images taken from the Mars 2020 Rover will be available on the NASA Jet Propulsion Lab (JPL) public website, to be shared with people around the world, supported by Amazon Web Services (AWS).

The Name the Rover Contest as well as the “The Send Your Name to Mars” campaign used a serverless website design on AWS, which provides reliability, high performance, and seamless scalability. Nearly 11 million people submitted their names worldwide. The names will be stenciled on a chip that will fly aboard the Mars 2020 rover.

Learn more about NASA JPL and how AWS solutions support them.