This post details an approach taken by Aioi Insurance Services USA to research an exploratory quantum machine learning application using the Amazon Braket quantum computing service. The term quantum machine learning (QML) has multiple definitions, depending on the context. Here, by QML we mean the use of a quantum computer to perform a machine learning task on classical data. Specifically, we explore how to use quantum computers to build a proof-of-principle binary classifier for risk assessment in a hypothetical car insurance use case. A binary classifier is an algorithm that assigns input data a binary label (0 or 1, Type A or Type B, Safe or Fail, etc.) to “classify” the data. We use a hybrid quantum-classical approach and train a so-called quantum neural network to perform binary classification.

This demonstration is a result of collaboration with Aioi Insurance Services USA — a subsidiary of Aioi Nissay Dowa Insurance which is a member of MS&AD Insurance Group Holdings — a major worldwide insurance organization with close ties to the Toyota group, offering Toyota Insurance in 37 countries. Aioi USA is a full-service “insurtech” insurance agency that develops data science-based products and services for the transportation industry.

Aioi analyzes telematics data from SAE driving automation L1 and L2 vehicles to predict driving risks. The vehicles are equipped with a multitude of sensors collecting data. Using the data, Aioi would like to assign each vehicle a binary score (safe or fail) that indicates the driving risk score for the vehicle. This risk score assignment task is equivalent to binary classification.

Classical machine learning techniques such as linear regression (LR) or deep learning (DL) have been developed to perform binary classification. LR is a popular approach when the data-label mapping is described by a linear function. For large and complex data structures, DL offers a way to capture nonlinear behavior in data-label mapping.

We already have powerful classical methods to perform classification tasks; so how can quantum computers help here? The short answer is, we don’t quite know yet. The results by Wiebe et al., Phys. Rev. Lett. 109, 050505 (2012) and Schuld et al, Phys. Rev. A 94, 022342 (2016) established that quantum LR algorithms can be exponentially faster than their classical counterparts under the assumption that classical data has been mapped onto a quantum state of a qubit register. The flip side is that these quantum algorithms output a solution in the form of a quantum state which may not be immediately useful for further processing on a classical computer. On the DL front, quantum neural networks (QNNs) emerged as a potential replacement for classical neural nets (Gupta and Zia, Journal of Computer and System Sciences 63, 355–383 (2001)). QNN designs to perform binary classification tasks were proposed recently by Farhi and Neven arXiv:1802.06002 (2018). An advantage of QNNs is that they can directly output a classical label value, though a researcher still has to input data in the form of a quantum state. Whether or not QNNs have practical computational advantage over classical neural nets in DL tasks remains an open question and an area of active research. This motivated us to explore how QNNs can be used for binary classification of binary classical data with an eye towards the constraints imposed by near-term hardware on QNN’s circuit design.

Before we proceed with a quantum solution, it is instructive to recall the main steps of constructing a classical neural net (NN) based solution. A classical NN takes data x and a set of parameters θ1 ,.., θK (so-called weights) as an input and transforms it into an output label Ȳ = f (x, θ1 ,.., θK ) where f is determined by the NN. The goal is then to use a training set to train the NN, i.e. to determine the values of θ1 ,.., θK for which the discrepancy between the output labels and the training set labels is minimized. You achieve this by minimizing a suitably chosen loss function L(Ȳ, y, θ1 ,.., θK ) over the NN parameters θ1 ,.., θK using, for instance, a gradient-based optimizer.

To construct a quantum binary classifier, we follow a similar procedure with a couple of modifications.

In the training of the QNN circuit C, our goal is to find a set of parameters θ1 ,.., θK such that for each data point in the training set T, the label value  y is close to Ȳ. To achieve this, we minimize the log loss function L(Ȳ, y, θ1 ,.., θK ) defined as:

The first step in the implementation of a quantum binary classifier is to specify a quantum circuit that maps classical data onto quantum states. We map classical bit values 0 and 1 onto quantum states |0〉 and |1〉, respectively. By convention, the initial state of a qubit is always assumed to be |0〉. If a quantum algorithm requires the input quantum state to be|1〉, then we obtain it from |0〉 by applying a qubit flip gate X i.e. |1〉 = X |0〉. Below we provide code that generates a quantum circuit for preparing an arbitrary multi-qubit computational basis state|ψi 〉 using the Amazon Braket SDK.

Now that we know how to prepare input quantum states that correspond to classical data, the next step is to define and construct a QNN circuit C (θ0 ,.., θ2N ) that we will train to perform binary classification. We use the QNN design layout depicted in Figure 1 below. It has 2N+1 classical parameters defining: N single-qubit gates Ry(θm) acting on qubits m = 0, N-1; one single-qubit gate Rx(θN) acting on the qubit N, and N two-qubit gates XX(θk) acting on the pairs of qubits {0, n} where n = 1, N. 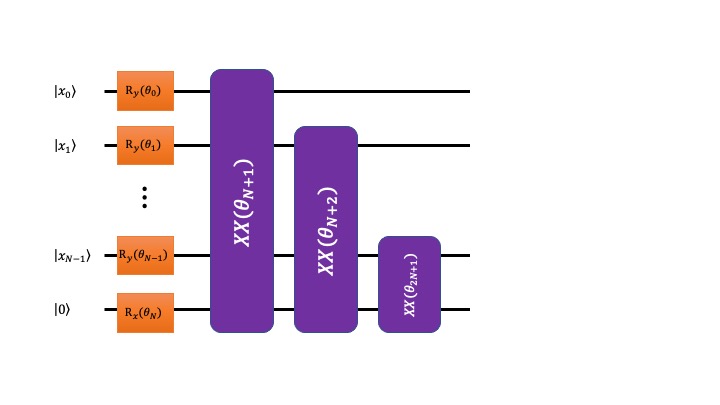 The code below implements this QNN, applies it to an arbitrary input state defined by a classical bit string, and measures the values of the label qubit.

Putting it all together, we are now ready to train our QNN circuit to reproduce binary classification of a training set T. For the example below, we assume that labels  yi are generated by a Boolean function F(xi) = (∑j xij) mod 2. To emulate data in the training set T, we generate eleven random 10-bit strings (data) and assign them labels according to F.

Run the code above and wait for the optimizer to converge. It outputs a message that looks like this when the optimizer finishes.

We note that our QNN circuit is designed to compute the parity of input data exactly for an appropriate choice of the parameters θ0 ,.., θ2N. Thus, the global minimum of the loss function using this QNN is zero. This is generally not the case in DL applications, however. Note also that L(Ȳ, y, θ0 ,.., θ2N ) is not convex with respect to the parameters θ0 ,.., θ2N. This means that if the final value of the loss function value is not zero, the optimizer got stuck in a local minimum. Do not panic. Try running the optimizer with a different set of initial parameters pars0. You can also explore various minimization algorithms by specifying method=' ' in the minimize function.

Calling res.x outputs the optimal values of the parameters θ0 ,.., θ2N, and you can use them to run the “optimal” QNN and perform binary classification on the data that is not a part of the training set. Try that and compute the mean squared error of the classifier.

There are 1024 possible 10-bit strings. For our example, we chose a training set that has only 11 data points (bit strings). Yet it is sufficiently large to train the QNN to act as a perfect binary classifier for all 1024 possible features. Let’s demonstrate that.

As an exercise, use the optimal QNN parameters in res.x and apply the resulting QNN to all 10-bit strings that are not in the training set. Record the mean squared error between the predicted and computed label values.

Predicting driving risk scores for L1 and L2 driving automation vehicles is a computational task poised to become a mainstay as vehicle driving automation increases to L3, L4 and L5. The problem amounts to binary classification. Classical machine learning techniques such as DL can be applied to solve the problem. But can the emerging quantum computing technology solve this problem as well? This post explored how quantum machine learning can also be used to perform binary classification and analyze binary (telematics) data by combining QNNs with the Amazon Braket quantum computing service. The QNN binary classifier designed in this post has a number of quantum gates that scales linearly with the size of each data point. This is advantageous for implementation on near-term quantum computers that are currently limited in the number of sequential quantum gates they can support. A future area of investigation for the team at Aioi is to apply more complex data sets, and constructing QNNs to classify them. You can explore or try out the code from this post on Github.