Certificates are vital to maintaining trust and providing encryption to internal or external facing infrastructure and applications. AWS Certificate Manager (ACM) provides certificate services to any workload that requires them. Although ACM provides managed renewals that automatically renew certificates in most cases, there are exceptions, such as imported certs, where an automatic renewal isn’t possible. This post provides you with two options for monitoring certificate expirations by using events and metrics that are published into Amazon CloudWatch by ACM. This data is used to produce notifications through Amazon Simple Notification Service (Amazon SNS) as well as to log and report the findings into AWS Security Hub.

A certificate that isn’t renewed and then expires can lead to an unavailable website or application. This can result in an operational and business outage. Amazon Web Services (AWS) provides many options you can use to get alerts about expiring certificates, but some organizations get their certificates from other parties that don’t have access to the AWS account where these notifications are configured. And although Security Hub can be used to monitor certificate expirations without the solution described in this post, Security Hub is a Regional service, and monitoring of certificate expirations across Regions can be time-consuming. This solution consolidates all certificate notifications from all Regions in which the solution is deployed into the findings of a single Region.

The first of the two options I describe is to use the ACM built-in Certificate Expiration event, which is raised through Amazon EventBridge, to invoke a Lambda function. In this option, the function is configured to publish the result as a finding in Security Hub, and also as an SNS topic used for email subscriptions. As a result, an administrator can be notified of a specific expiring certificate, or an IT service management (ITSM) system can automatically open a case or incident through email or SNS.

For this walkthrough, you should have the following:

Although the notification could simply be sent as an email, security event notifications are best integrated into ticketing or alerting systems. For that reason, this solution includes integration with Security Hub to make it easier to mobilize a response to the findings.

Figure 1 shows the workflow for Option 1, in which you use a CloudWatch event to identify an expiring certificate. 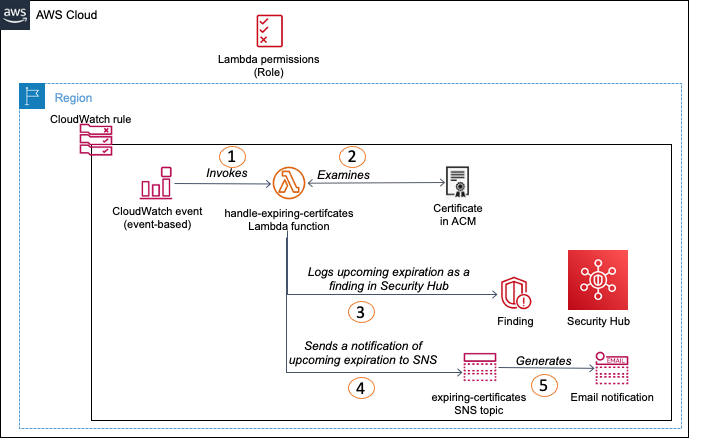 In Option 1, a raised CloudWatch event from ACM indicates that a certificate is approaching expiration, which initiates the solution. The option workflow is as follows:

Figure 2 shows the workflow for Option 2, in which you use a scheduled CloudWatch rule to identify all expiring certificates. 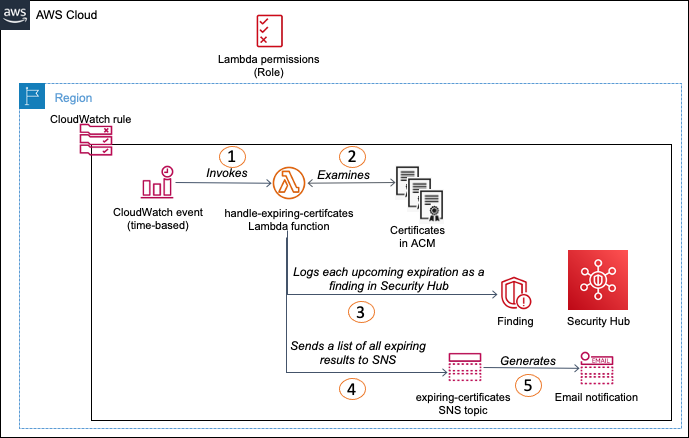 Option 2 provides a scheduled solution to examine all expiring certificates in ACM, log all the findings in Security Hub, and generate a single notification through SNS for all certificates that are found. The option workflow is as follows:

Both options begin with deploying the same Lambda function, along with the necessary AWS Identity and Access Management (IAM) roles and policies.

To configure IAM roles and policies and deploy the Lambda function

Deploy Option 1: Use a CloudWatch event to identify an expiring certificate

The first option is initiated by a CloudWatch rule that is invoked by the DaysToExpiry metric being raised for a specific certificate. The rule invokes a Lambda function within the Region that gathers up the certificate information. The information is used to publish a finding in Security Hub for the single certificate and create an SNS notification with the certificate details.

To set up an SNS topic and CloudWatch Events rule

ACM will raise an event daily for each certificate that is 45 days or less from expiration, and this option provides a way to capture and act on each event for resolution. You only need to configure this option once, and this solution will notify all subscribers via the SNS topic when it is run.

Deploy Option 2: Use a scheduled CloudWatch rule to identify all expiring certificates

Use the instructions in Creating a CloudWatch Events Rule That Triggers on a Schedule to create the CloudWatch rule. Figure 5 shows the first step in creating the rule.

The Cron expression of 5 0 ? * 1 * sets the event to invoke weekly on Sunday at 12:05 AM GMT, but you can create whatever schedule you want to use.

When you have everything properly configured and Security Hub set up, you should see a Findings page similar to the one in Figure 6. Note that the Remediation text for each finding is a URL that will open the specific, expiring certificate in the ACM console.

Because customers have different processes for managing certificates, the two options that I presented can be used in a number of ways. Option 1 provides a single email for each expiring certificate at the moment that the event is raised through CloudWatch. Use this option if you want to manage each certificate individually, and are also considering using this solution as part of a larger automation for managing certificates. That automation could include integration with an ITSM or case management system. Option 2 produces a single email that lists all expiring certificates on a scheduled basis. This option can be used for a weekly or monthly listing of all certificates that might require action taken on them.

If you no longer require this process in your environment, delete the following resources to avoid incurring future charges:

From a security perspective, you should also delete the IAM role and policy that you created in the first two steps.

Amazon Certificate Manager (ACM) can perform automatic renewals of certificates that are generated within ACM, but when certificates are imported into ACM, a mechanism to track their expiration is necessary. This blog provides the steps to create notifications for administrators to act on expiring imported certificates. In addition, the solution presented here also publishes all the findings to Security Hub in a single Region for further action, and provides security teams with greater visibility into certificate status.